Travel-loving teacher currently learning to live in Madrid, Spain. A keen runner, an amateur baker and a bit of a bookworm, with an ever growing list of places that I need to visit!

Why Costa Rica? For me, it was a combination of things: I hadn’t travelled in in this part of the world before and had heard from several sources that Costa Rica was Central America for beginners. Along with that, my Spanish was woeful and this lovely country boasts some brilliant, reasonably priced language schools, with immersion programmes where you can stay with a local family and attend daily classes. These were the official reasons. However, even though I was not planning to visit the traditional wildlife spotting areas, the potential chance to see some interesting creatures in their natural habitats was also very tempting. Top of my list? A sloth sighting – that creature so synonymous with Costa Rica that a handsome little fella was on the front of my guidebook. And so, I found myself in the home of Elbita and Alvaro in the lovely college town of Heredia for two weeks. 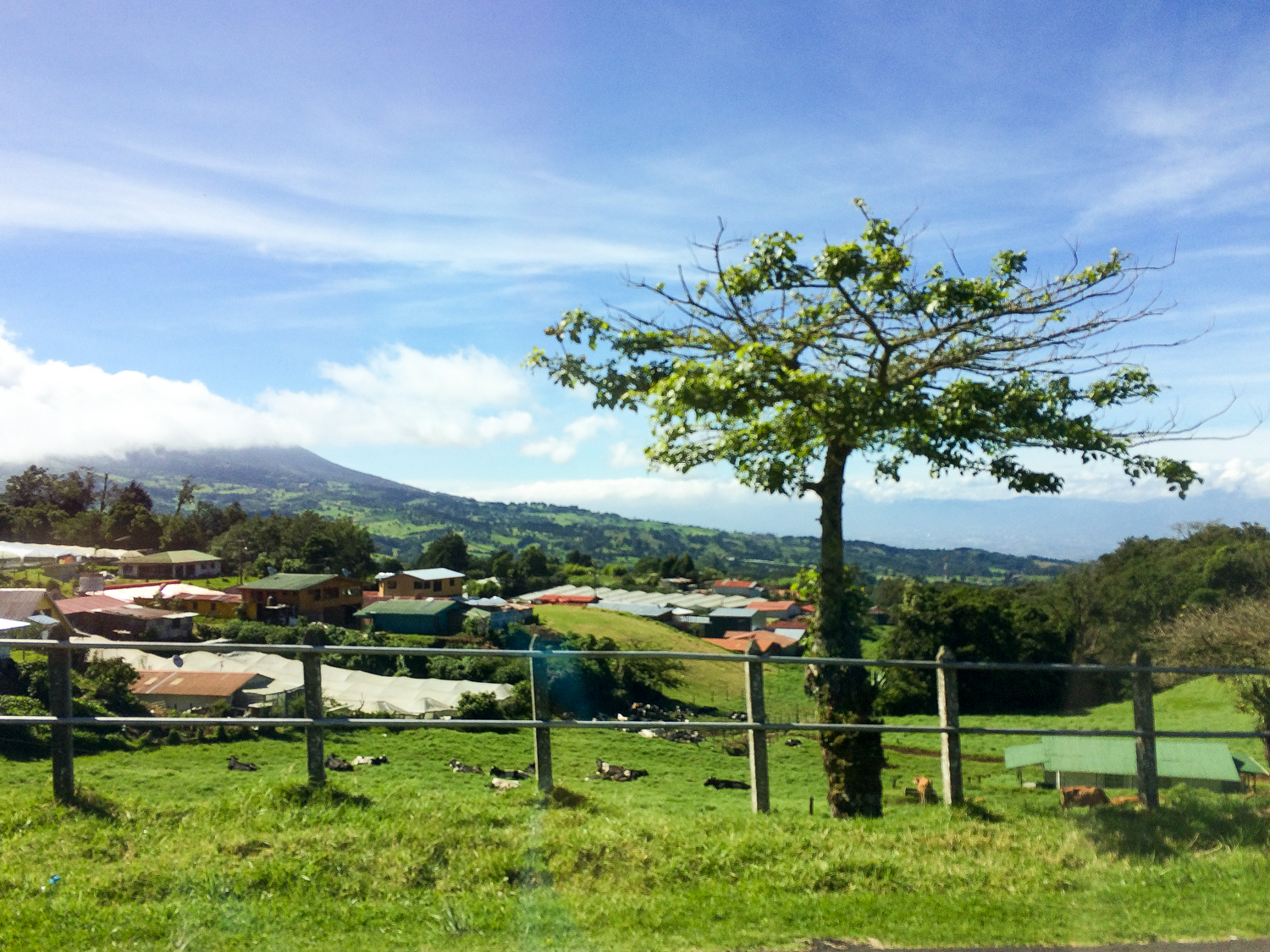 Heredia is a suburb of San Jose. Despite being just a few kilometres away from the capital, it seemed much more calm, scenic and friendly. My homestay was a ten-minute walk from Intercultura, the language school where I was attending daily classes in an attempt to grasp at least some basic Spanish. With the words of my A level French teacher echoing in my head (“Bethan’s not a natural linguist…”) I arrived at what turned out to be the friendliest school imaginable. Cheerful reception staff greeted you each day, the classrooms opened onto a leafy courtyard with places to relax, or study, or chat, and the teachers were committed, lovely people with seemingly endless patience. I felt lucky to end up with the same teacher, Ileana, for all my classes. She was a superstar. Classes ran for four hours each morning and then the rest of the day was free for exploring.

Located in the central valley of Costa Rica, Heredia is the perfect place from which to visit the many coffee plantations. One afternoon after class, a few of us visited the Doka estate. Driving to the estate along winding roads was a scenic treat, with vistas across the valley to San Jose, and roadside stalls selling fruit and local produce. The coffee estate was beautiful in its own right, and then to see how the beans are picked, dried, roasted and made into your everyday cup of coffee was fascinating, and far too lengthy a process to go into here. Most of the coffee gets exported from Costa Rica, especially the good stuff, and we were told that the everyday coffee from the supermarkets in Heredia wasn’t as good as the fair-trade kind we could get in our home countries. My daily morning coffee with Elbita and Alvaro confirmed this. However, the fresh, free samples given out at the end of the tour were amazing and we flew around the rest of the estate in a caffeine-fuelled haze. And finally, I was starting to see some beasts. In the mariposario, I managed to control my fearful panic of ‘large things that flap too close to your face’ to admire some of the most beautiful (and huge) butterflies I’d ever seen. Sitting quietly by some of the tropical plants in the garden, we were then rewarded with a little show by the hummingbirds, hovering in and out of the gigantic flowers.

So far, so good: two winged beasts. However, I was still keen to see something bigger, furrier, and sloth-shaped. Luckily a weekend away to Montezuma was planned. I set off with some other students from the school, under the watchful eye of Guillermo, our tour guide/friend/driver/amorous suitor (and that’s a story for another time). Montezuma is a super-relaxed beach town on the pacific coast of Costa Rica. Nicknamed Monte-fuma (for obvious reasons) and basically just a strip of tourist shops and laid-back restaurants, it was a total change from the towns in the central valley.

We arrived at our ‘casita’, which was nestled in the jungle, about 200 metres from a beautiful, pristine beach. I quickly realised that this was going to be a perfect spot to see all sorts of creatures. Indeed, many of these creatures seemed keen to welcome us, by creeping into my bed (small lizard), scuttling about in the shower (little crab), having a rummage through the bins outside (family of howler monkeys) or just by relaxing by the front door, ready to nip inside and cause terror and manic screaming (I’m talking about you: large, unidentifiable insect with a black shell and the look of Satan in your eyes). Luckily, after a few drinks and Guillermo’s reassurances that Beelzebub the Super Bug was keeping the other, more ‘bitey’ insects away, I started to relax into the jungle lifestyle. That mozzie net was thoroughly tucked in though, believe me.

We awoke the next day to the nightmarish sound of howler monkeys. The sound they make is somewhere between a gasp and a roar, and is hard to associate with the nimble monkeys we glimpsed through the leaves. On the way to breakfast, we caught a glimpse of an animal we had not seen before, but which had scared me to death the night before by galloping across the path in the pitch darkness. Again, scampering through the trees, was something that looked like a cross between a rabbit, a rat and a pig. Sending this very scientific description back my dad in the UK (unexpectedly, Costa Rican wifi was amazing) he soon figured out that these little guys were probably agoutis: forest dwelling rodents. Thanks Dad. The creature count was increasing all the time. It was whilst I was on this amazing wifi, having a chat to the folks at home, that the lizard sculpture by the pool started blinking. I had been practically sharing my sun lounger with a foot-long reptile. At first I thought he was an iguana but further googling suggests he was probably a ctenosaur. I am rather pleased with the Jurassic Park-iness of this name. He had dark green shimmering skin, and his face was raised to the sun in a manner which can only be described as regal. He was quite beautiful.

However, possibly the most stunning wildlife sighting came later that day, on the boat on the way to Isla Tortuga. Someone spotted a huge, dark shape rising up out of the water and we quickly realised that we had been joined by a humpback whale, swimming along in the calm, warm water. Humpbacks use these waters to give birth to their young, and there were gasps on the boat as we realised that the giant whale leaping out of the water was only the baby. Mum was still under the surface. When she came up for air, her sheer size and power was incredible. She was magnificent, and seemed to move at a prehistoric pace. This was my second humpback sighting – the other was in Canada a couple of years ago – and both sightings have been moving in a way that is difficult to describe. To see a mother with her calf seemed like an extra privilege. Such a privilege in fact, a pod of dolphins seen in the distance was met with low key interest. More interesting, in a fleeting and slightly voyeuristic way, was noticing a giant sea turtle from the deck of the ferry back to the mainland. It was only when a couple of locals pointed out that it was actually two sea turtles, literally making the beast with two backs, that we realised why the turtle seemed to be swimming so strangely. His mind was clearly elsewhere. 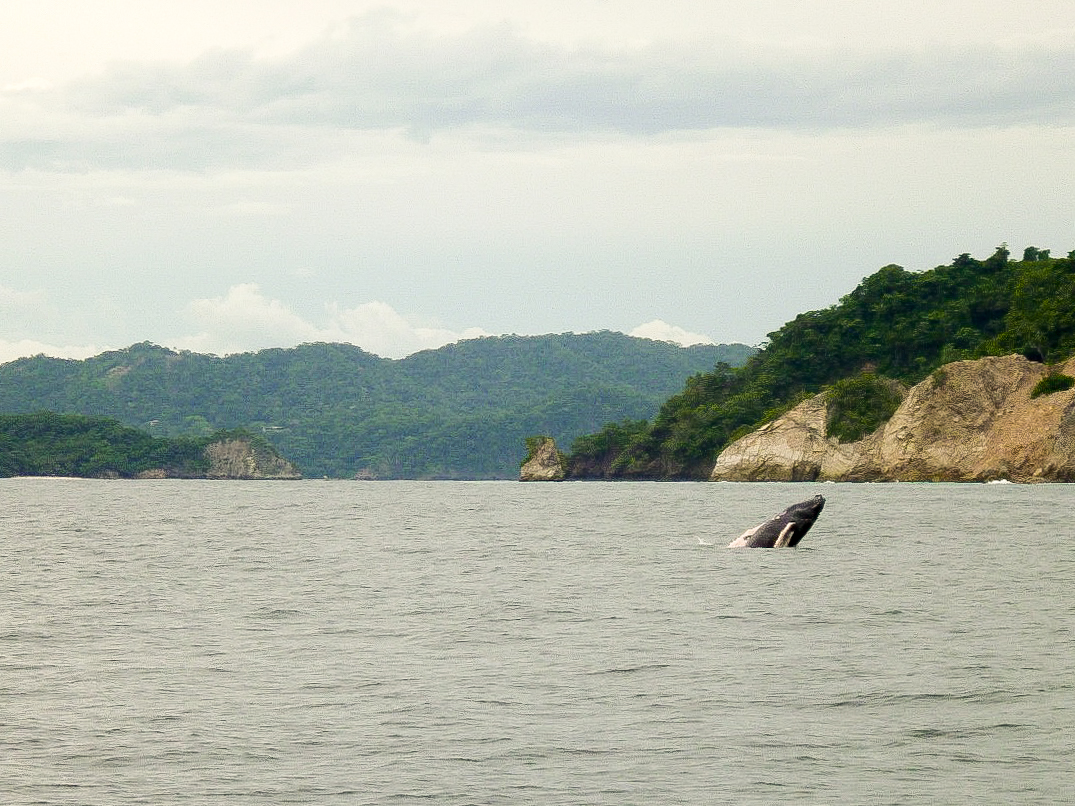 As was mine. The only thing that was going to top all these fantastic beast sightings was going to be a sloth. But I only had one day left…

My final day in Costa Rica consisted of a trip to Volcán Poás, an active volcano at 2, 708 metres with a mile-wide crater. At the bottom of the crater is one most acidic lakes in the world. It’s so acidic in fact, that it can’t support any aquatic life. Signs around the site advised tourists not to stay and admire the view for more than twenty minutes, as the gases being emitted could cause lung and eye irritation. Helpful signage along the route towards the viewpoint outlined the escape route off the volcano, should there be an eruption, and pointed out that ‘if you can’t breathe, return to the visitor centre’. Potential threats to life aside, this was a lovely place to spend my last day. It was only with a twinge of sadness at not seeing my sloth that I headed home.

People often tell you that the love of your life will arrive when you least expect it. Turns out, the same is true of sloths. On the way home from the volcano, we encountered the Costa Rican version of a Canadian ‘bear-jam’… cars hastily parked by the side of the road, a horde of people staring eagerly into the undergrowth, cameras being waved around. And there, hanging upside down from… an electrical cable actually, but let’s just say it was a branch… was my sloth. And I might be biased, but this was no ordinary sloth. I suspect he had been media trained. He – or maybe she: they are very hairy and identifying features are not easy to spot – was making his slow way along the cable, pausing occasionally to look down beatifically at the assembled crowd, or to strike a pose. The one-armed hang and the backward-glance-over-the-shoulder were particularly arresting. His characteristically ponderous movement down the cable meant that I got the quality sloth time I had wanted since I arrived here, and also, I nearly missed the bus back. 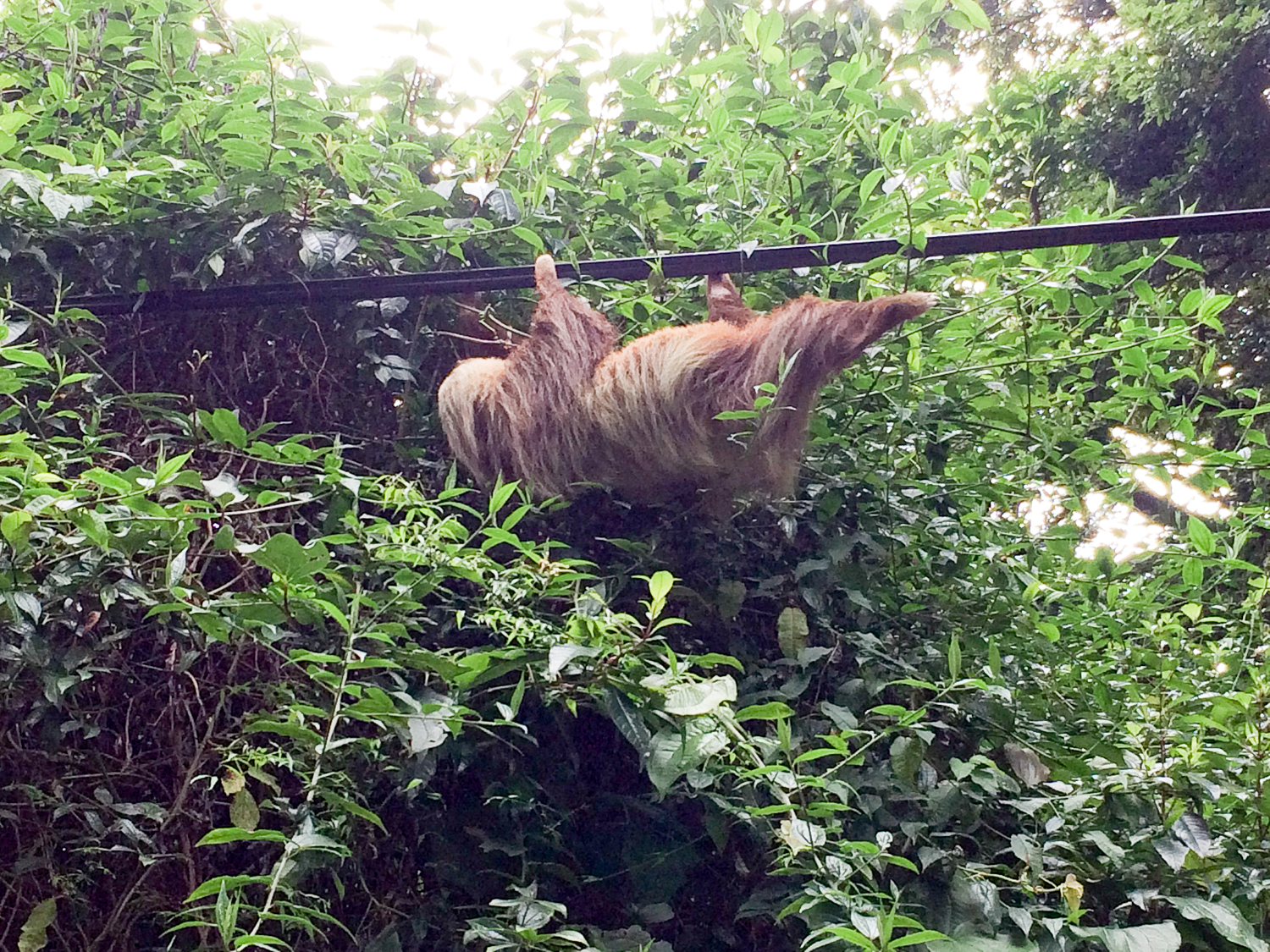 And so, it was with a happy heart, some new friends, slightly less rubbish Spanish, loads of wonky pictures of animals and a souvenir sloth fridge magnet that I left Costa Rica, hoping to return one day.

69 thoughts on “Courses, Coffee and Creatures in Costa Rica”