When you visit Granada like a local, experiencing a traditional relaxing hammam treatment is a must. Without a doubt the best hammam in Granada, Al Andalus is the perfect way to relax after a long day’s walk in the city or an extensive visit to the Alhambra.

As Granada is just 100 kilometres up the road, I have visited the city often. I have spent wonderful times with my friends there, visiting the Alhambra, going on tapas crawls or simply walking around and taking in the special atmosphere of the city. Last month however I decided it was about time to see Granada like a local and experience a relaxing session at the Hammam Al Andalus.

Granada and the Arabic influences

Walking along the streets of Granada you will notice how different the architecture is, from neighbourhood to neighbourhood. The old Albaicín spreads its white houses over the hill, across the Alhambra. The historical centre of Granada, which is home to the beautiful cathedral is an array of pretty streets dotted with tapas bars, Arabic patisseries, spice shops and an oriental market. The old Jewish quarter, with its broken buildings is the canvas of many street artists. Sacromonte’s rustic caves have remained the same as centuries ago.

Between the 12th and the 15th century, when the Iberian Peninsula was part of the Muslim Nasrid dynasty, Granada was an important trading centre between the North of Africa and the European continent. Gold, silk and dried fruits were making their way through the city, called the Emirate of Granada back then.

Today, Granada is one of the most important places in Spain where you can observe the Spanish – Islamic art, through its architecture, culture and traditions that are still kept. And one of these particular traditions is going to enjoy a relaxing experience at the hammam, the same way as the locals have been doing centuries ago.

What is a hammam? 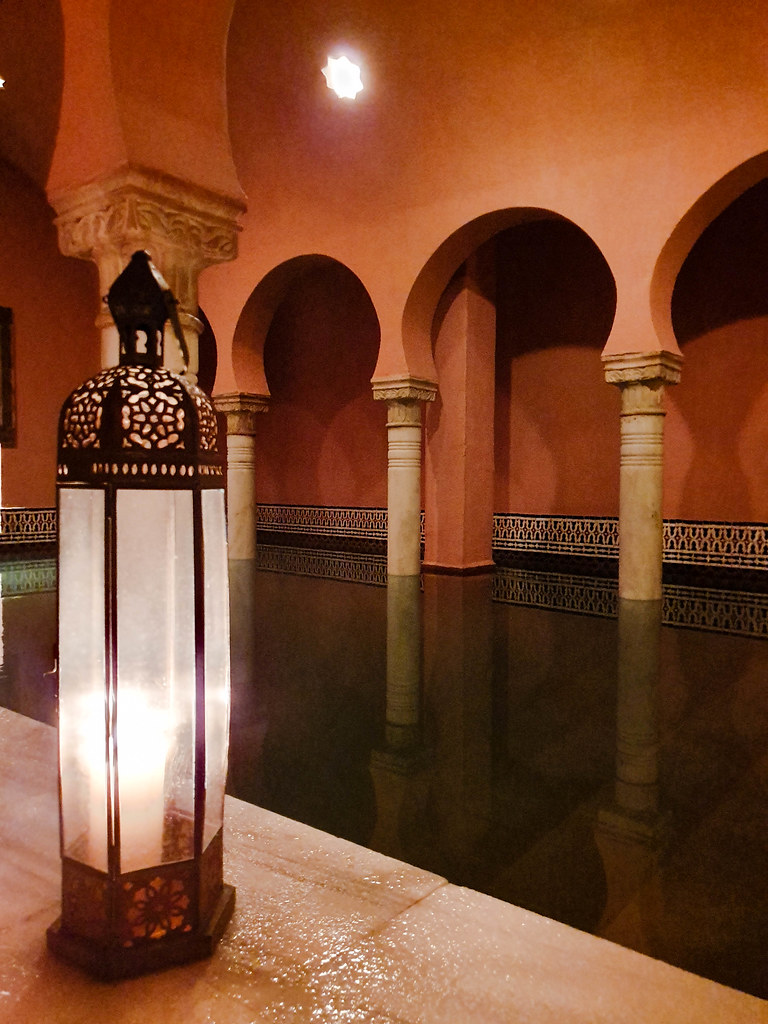 Originating in the Roman Empire times and made popular by the rising of the Ottoman Empire and the Islamic world, the hammam is a public bathing space which uses water and steam for deep cleaning and relaxation sessions. Because Granada has been under the Moorish influence for so many centuries, it has been introduced to the culture of going to the hammam much earlier than the Western Europe, which only discovered it during the 19th century (think of the Roman spa in Bath – UK, or the Széchenyi Thermal Baths in Budapest – Hungary). Hammams used to be located very close to the mosque. Muslims believed that the water was a symbol of purity, used to cleanse their bodies, before performing the purification ritual through prayer, inside the mosque.

These days, a visit to the hammam is purely for relaxation and unwinding reasons. 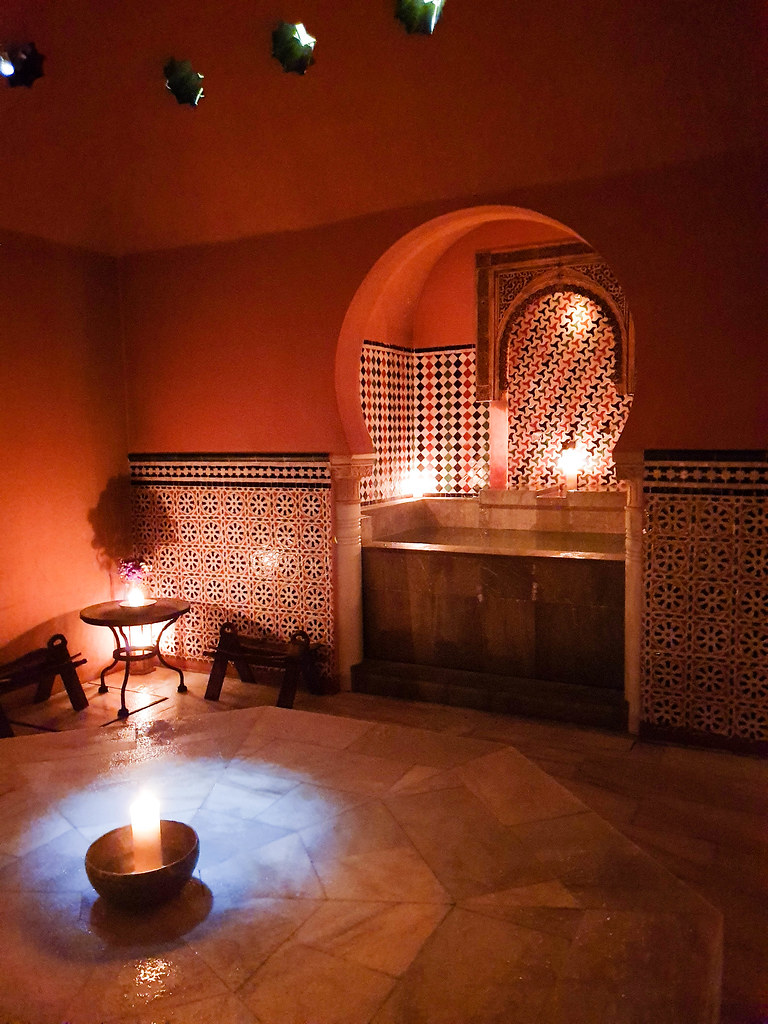 Located at the foothills of the Alhambra, Hammam Al Andalus is the most authentic of its kind in Granada. The hammam is housed by a renovated 13th century old building which in its days used to be a bakery, and here comes the interesting part! After Granada has been conquered by the Christians, in 1567, a cultural repression was imposed to the locals, which banned the use of public baths, as well as the use of the Arabic language, Moorish clothing, even Arab names. The Christians wanted to erase all Islamic culture from Granada. Because of the ban, the public baths were turned into bakeries due to their heating boilers which helped powering the ovens.

During the archaeological excavations of the building, ancient water cisterns were found. The building is very close to the Santa Ana Church, which used to be a mosque before the 15th century.  So, it might be that Hammam Al Andalus is located in the exact same place as the original baths used to be, in the 13th century!

There are four pools, each with different water temperatures at Hammam Al Andalus Granada: one with cold water, one with hot water, and two with warm water. The wet steam room and the relaxation area where water and Moroccan mint tea are served, are completing the circuit of the hammam. In the back, going down the stairs on a narrow corridor, there is the massage area.

The hammam is very spacious and, even if there are other people around, because of its layout I felt that I was alone most of the times. 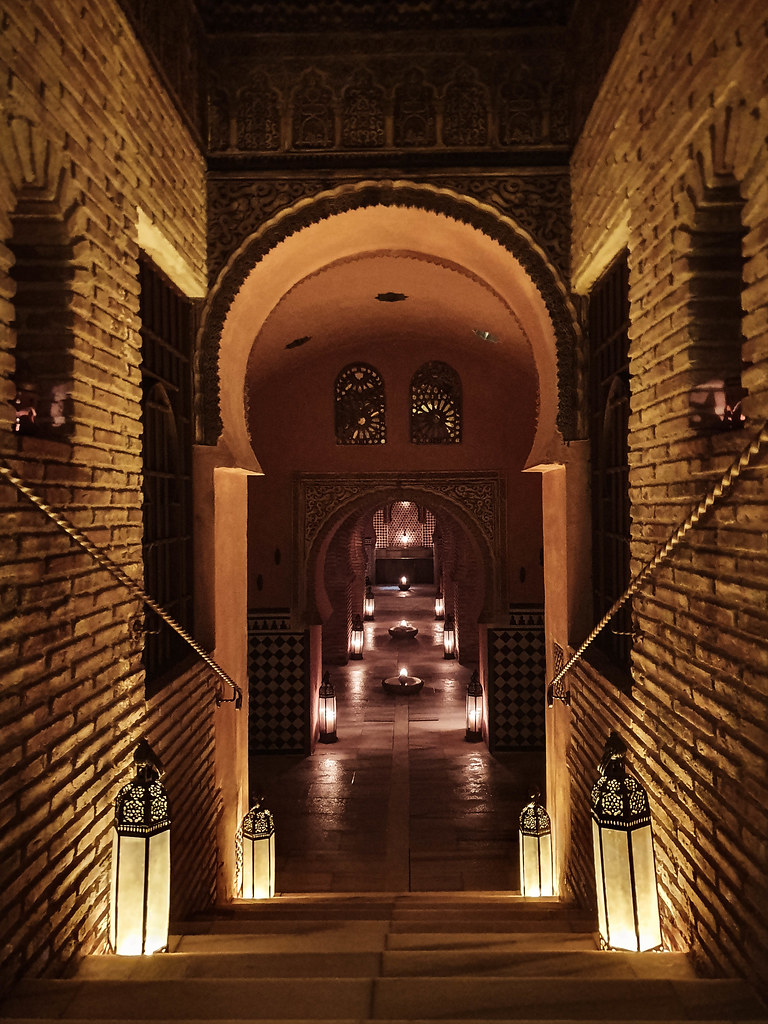 As I arrived at Hammam Al Andalus in Granada I was welcomed with a smile and showed to the changing rooms, which are gender separated. There I was given a pesthemal for my treatment and a locker to put my belongings in.

The dressing room has individual cabins in which you can have privacy to change without other guests seeing you. The “beauty corner” has different creams to moisturise your body with after the hammam session, as well as a hair dryer. There is even a machine that takes the water out of your bathing suit, so no need to worry that it will get your bag wet.

I waited for a couple of minutes on the bench until a lady came to give me a quick tour around the hammam, showing me where all the pools are and explaining how the session is going to be. As I entered the hammam from the dressing rooms I could immediately smell the exotic scents in the air.

Firstly, I stepped into the hot water pool, which has a small stream coming in from the back. The pool is enclosed inside a space that looks like a room filled with water, decorated superbly with patterned mosaics and lit by large candles. As I looked up, I couldn’t stop a “wow” of amazement, seeing the intricate golden ceiling surrounded on all sides by mashrabiya windows. I submerged myself underneath the water up to my neck and just stared up, listening to the relaxing music and thinking about nothing. 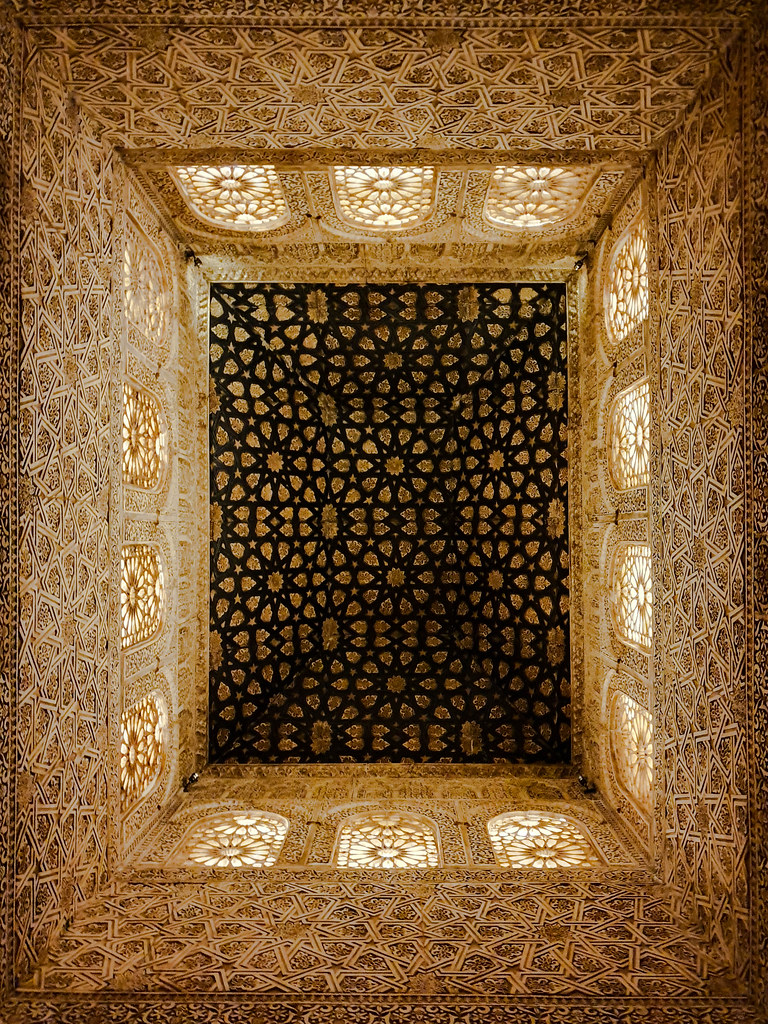 Soon, I was called for my massage. I chose the MIDRA 30 treatment, which includes a 15 minutes traditional kessa treatment on a hot stone bed followed by a relaxing 15 minutes massage. Before the treatment started, I was asked to choose the aroma of the massage oil. I had a choice between lavender, rose, amber and the local “flor de Granada” (which is pomegranate flower). I chose the latter because of its delicate scent.

After I laid on the hot stone bed, the kessa treatment begun with warm water being poured all over my body that loosened up all my muscles. Next, the masseuse covered my entire body with natural soap foam, and I kid you not, I felt like I was floating on a very fluffy cloud. Then, the scrubbing begun! Using the traditional Arab cotton glove called kessa and natural red grape soap, which smells divine by the way, the masseuse scrubbed me from head to toes, getting rid of all the dead skin and impurities on my body.

The massage that followed was gentle and relaxing, both for my body and mind. I finished the treatment enjoying a few more minutes lying down on the marble heated stone from the massage area.

I spent the rest of my sessions enjoying the hot pools and the wet steam room, which helped me unwind and relax. The alternation between the hot and cold water pools is not only beneficial for the skin but also for the blood circulation.

As my 1.5 hours session ended, before I left, I was gifted with the kessa glove that I have since used many times at home and a wonderful smelling red grape natural soap that reminds me of what a relaxing time I’ve had at Hammam Al Andalus in Granada, every time I use it.

Needless to say that after this experience I floated down the street, back to my hotel.

What to wear in the hammam in Granada? 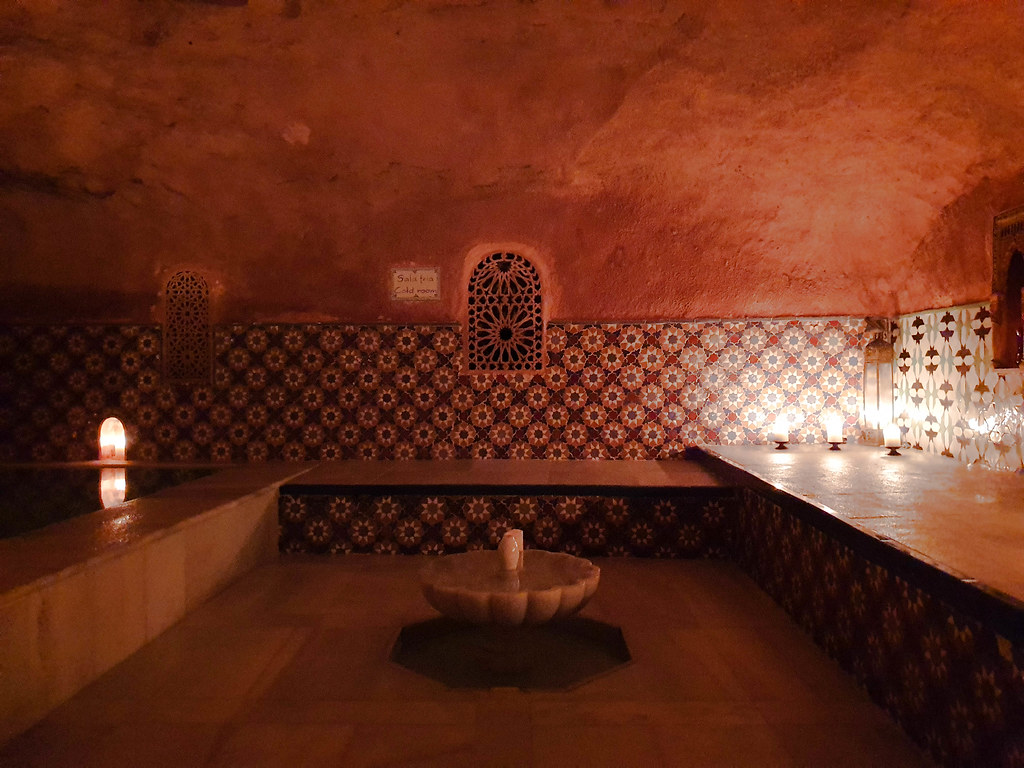 In Hammam Al Andalus in Granada you have to wear a bathing suit or a bikini that covers your bum (so no G-string ladies!). If you are getting a kessa massage as well, I recommend wearing a two parts bikini instead of a full bathing suit, so that you can enjoy the experience better. If your back is covered by the bath suit you won’t feel the scrub the same way.

Men can wear either long or short swimwear, but to be honest I didn’t see anyone wearing speedos.

You don’t have to wear a swimming cap in the hammam, but you do need to keep your hair tied, if it’s long.

Don’t worry about bringing a towel as the hammam will give you one for the duration of your session.

There are different packages of relaxation that you can book at Hammam Al Andalus Granada, based on your budget and what you are looking for. You can enjoy the use of the baths even if you don’t book a massage. Browsing the hammam’s website you can see the different packages and special offers they have.

The experience that I had at Hammam Al Andalus Granada, Midra 30, costs 79 euros per person at the moment. The use of the baths only costs 42 euros currently. The prices vary, depending on the day and time, which you can check on the website. It is better to book your experience in advance, especially during peak season, as the number of people allowed inside the hammam is limited.

Have you ever been to Hammam Al Andalus in Granada? Would you like to go? Please share your thoughts with me in the comments below. Disclaimer: Please note that I was a guest of Hammam al Andalus Granada and I received this experience complimentary. However, all the opinions in this article are my own and I would not recommend anything that I wouldn’t have enjoyed myself doing or think it was a great place to visit.

Some of the links one this website are “affiliate links.” This means that if you click on the link and do a purchase, I will receive an affiliate commission at no extra cost for you. This helps me keep my website running and continue to share my traveling knowledge with you. I thank you for booking your flights or hotels using the links on my website. Regardless, I only recommend products or services I use personally and believe will add value to my readers.

53 thoughts on “Experiencing the best hammam in Granada: Relaxing at Hammam Al Andalus”