A couple of weeks ago I was invited to join an online Japanese cooking class, organised by Hyper Japan with Sozai Cooking School and S&B Foods. A bunch of food passionate people gathered on zoom to learn how to make an authentic chicken katsu curry recipe, taught by professional Japanese chef, Kinu Yukawa.

History of the Curry in Japan 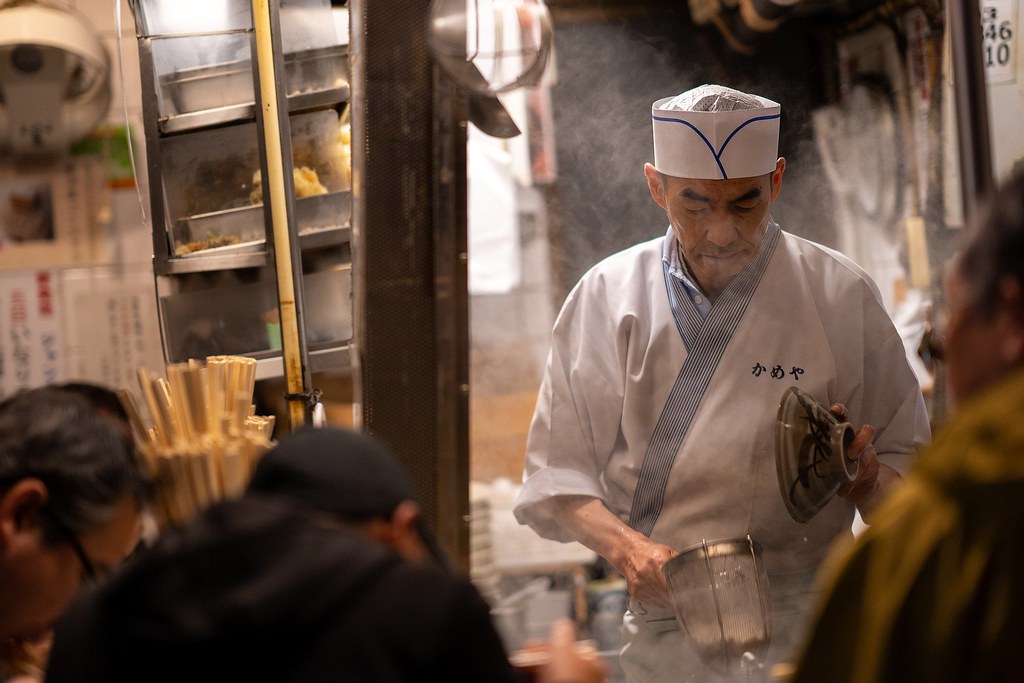 Curry was first brought to Japan in the late 1800s from India, by the British. It was said to prevent vitamin B deficiency, so the Imperial Japanese Navy adopted it and introduced it to its weekly menu. Even now, the Japanese Maritime Self Defence Force has curry on their menu each Friday.

At the beginning, the curry served to the marines was very different. The adapted recipe by the British used flour to thicken the sauce, to prevent it from spilling off the plates whilst the ships were moving. At that point, there wasn’t much spice in the curry.

As the curry became more and more popular among the Japanese people, one runaway Indian revolutionary, who was hiding in Japan, gave the dish the taste it has today. He started to import spices from India to re-create an Indian style curry, which was added to the menu at the bakery below his flat. His name was Rash Behari Bose. As his version of the curry started to become more and more popular, locals started to refer to him as “Bose of Nakamuraya” – the name of the bakery where his curry was sold. He ended up marrying the daughter of the owners of the bakery, and was granted Japanese citizenship in 1923. To this day, restaurants in Japan serve Nakamuraya curry.

The adapted curry is so popular in Japan today, that it is considered a national dish, and Japanese people eat more curry than sushi and tempura. The Japanese curry is quite different to what you are probably used to from the Indian restaurants in England, or on the trips you’ve taken to India. The Japanese curry is mild, a bit on the sweet side, quite thick, and includes vegetables.

Curry in Japan has gone beyond the borders of the simple vegetables in gravy, served with rice. The restaurants and cafes in Japan serve so many dishes inspired by the humble curry spices, such as Karee Udon (curried wheat noodles), Karee Pan (buns filled with curry sauce), Curry Doria (think of it as a lasagne made with rice instead of pasta and with curried meat instead of ragu) and Supu Karee (a curried soup served with chunky vegetables and whole chicken legs).

Katsu curry was invented first in 1899 at Rengatey restaurant in Tokyo. It was originally made using pork cutlets instead of chicken, which is now widely used in making katsu curry today. The term “katsu” refers to the panko breaded meat, not to the method of cooking the curry.

The Roux For Katsu Curry 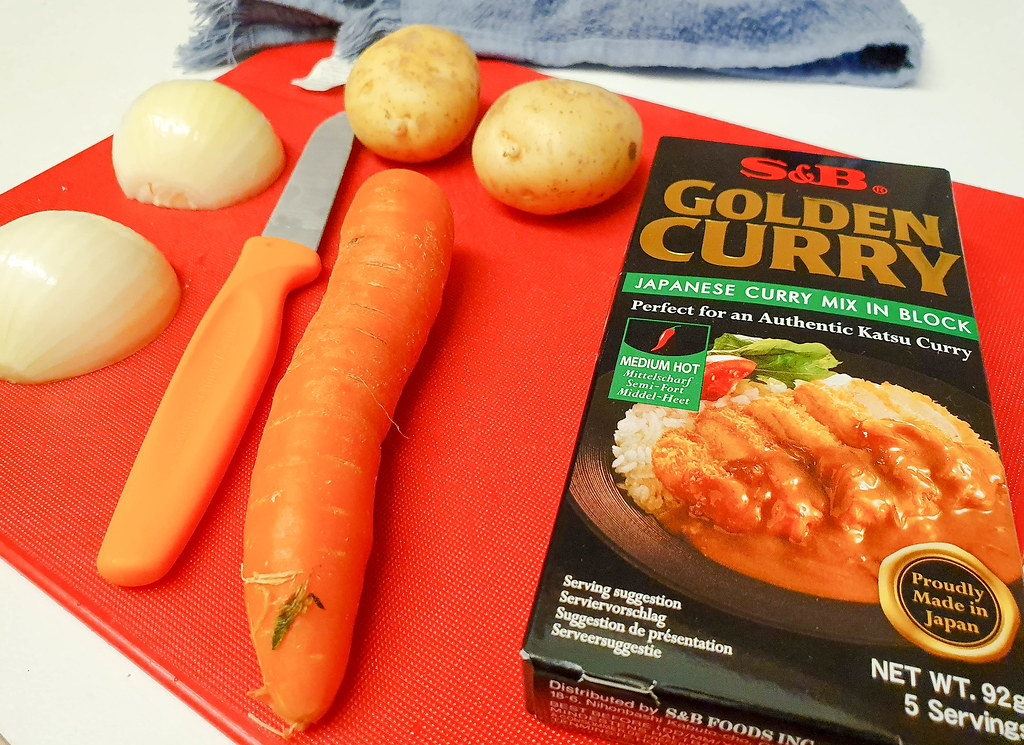 To make katsu curry, you first need to make a roux using curry powder, flour and oil. However, these days the roux comes in blocks, which are broken into pieces and mixed with sautéed vegetables such as onions, carrots and potatoes.

One of the most popular brands of roux blocks is S&B, founded in 1923 in Japan. They produce a variety of Golden Curry mix, wasabi and Japanese spices.

Where to Buy the Ingredients From

For an authentic katsu curry, you need to buy a couple of authentic ingredients. If you live in the UK, you will find everything you need, including the S&B roux blocks at the Japan Centre in Soho, and at the supermarkets around Chinatown.

You can also buy Japanese products online, from the Japan Centre’s website, but I highly recommend a trip to the shop if you’re in London and want to experience more Japanese flavours. When I was there for the first time, I spent probably around an hour just looking around and checking out the products which I hadn’t heard of before.  Of course, I left with three bags containing different flavoured mochi, a couple of S&B curry blocks and a bottle of cooking sake, which is extremely hard to find anywhere else, and too expensive to buy online.

Hyper Japan organises the largest exhibition celebrating the best of the Japanese culture, in the United Kingdom. Usually taking place twice a year at Olympia, in London, Hyper Japan brings together the worlds of anime, manga, video games, J-pop and, of course, Japanese food.

As the pandemic has prevented the festival from taking place this year, Hyper Japan has re-focused on offering authentic Japanese experiences online through their website, from which I’ve learned how to make authentic Japanese katsu curry. 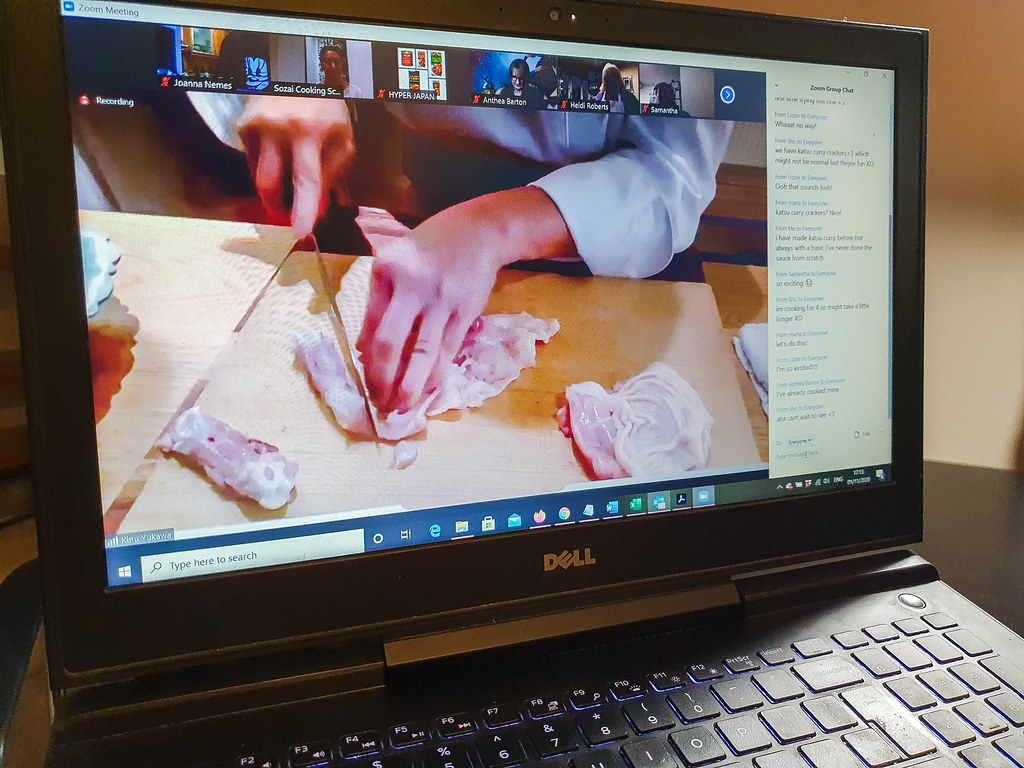 On this occasion, the katsu curry online cooking class was led by Kinu Yukawa, a Japanese chef and cookery teacher from Osaka, who is now based in London. She teaches Japanese cooking classes at Sozai cooking school, in East London.

As the roux for katsu curry takes a bit of time to cook, we were given instructions on how to best cook if before the online Japanese cooking class started. We were given a slightly different recipe to that on the box, which improved the taste of the curry. When the roux was ready, I added a splash of red wine and a knob of butter, which enhanced the flavour. 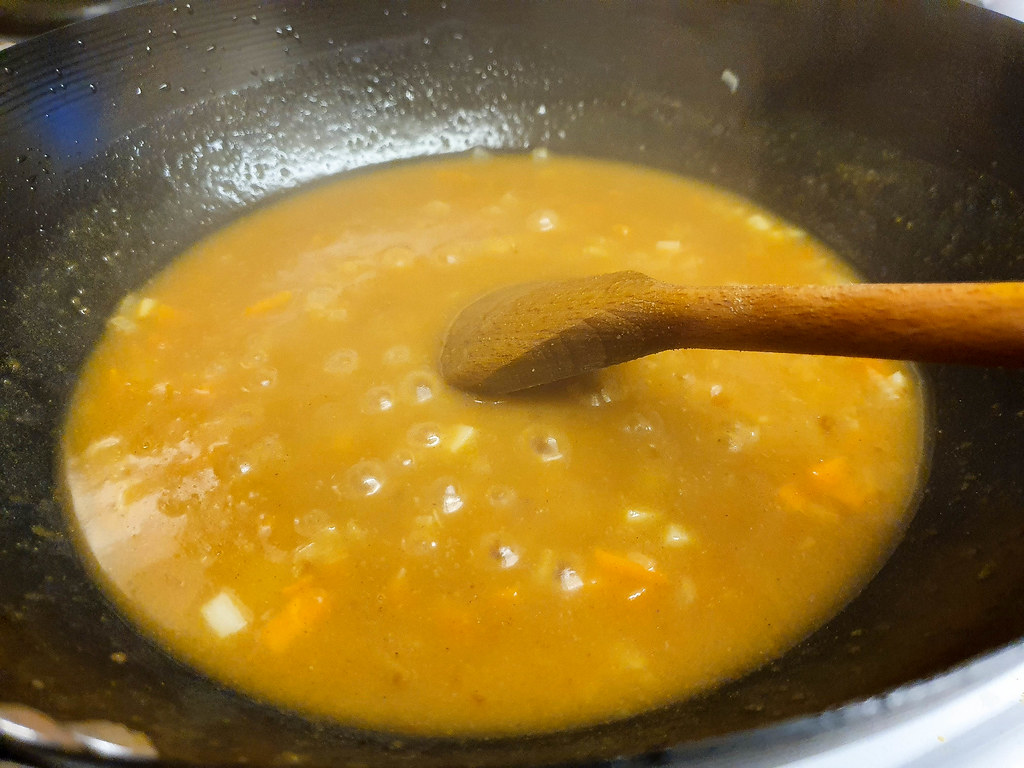 We started the class by preparing the chicken. Chef Kinu-san showed us how to easily debone a chicken thigh, without losing any meat in the process. I have to admit that I am quite hopeless when it comes to preparing meat, to I bought my chicken thighs already deboned.

Next, we prepared the eggs, flour and panko crumbs, which are the three essentials ingredients for a perfectly tender, but crunchy, piece of chicken. Chef Kinu cooked both a meat and a vegetarian version of the katsu curry recipe. For the vegetarian dish, she opted for aubergine slices. You can even make this recipe vegan if you leave the egg out and mix a little bit of water with the flour, then coat the aubergine slices before dipping them into the panko crumbs.

The secret to a perfect crunchy katsu is to make sure that every bit of the chicken or sliced vegetable is thoroughly coated in panko.  The order of dipping is as follows: egg wash, flour and panko. You can also make this recipe with golden breadcrumbs if you cannot find panko.  The difference is that panko gives the chicken a crunchier bite.

The next step is also very important: make sure that the oil is very hot before you place the chicken in. You can check it with a chopstick, or by dropping in a piece of panko. If it sizzles straight away, then it has reached the right frying temperature.

The cooking times of the chicken depend on the amount of oil you put in the pan. Chef Kinu used a pan filled with oil in which she deep fried the breaded chicken. I did not want to waste so much oil because I usually don’t deep fry, so I fried my chicken in a pan with only enough oil to cover the bottom. Whilst chef’s Kinu chicken only needed about two minutes each side, mine took much longer to cook. I turned the chicken on the other side after around five minutes, when the crumbs turned a beautiful golden colour. Before I took the chicken out of the pan, I checked it with a meat thermometer to make sure it was cooked properly.  As a rule, the internal temperature of cooked chicken should be at least 75 degrees Celsius. 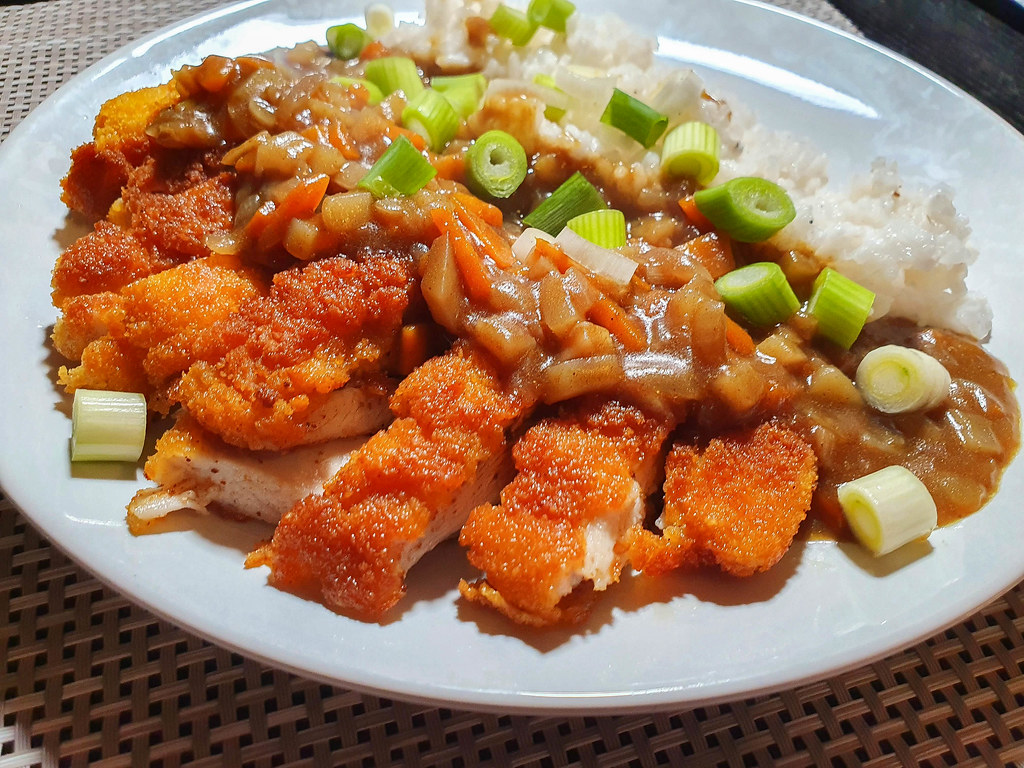 When everything was done, I plated my katsu chicken. I had made some basmati rice beforehand, so all I had left to do was to arrange the dish nicely on a plate. I put the rice on one side of the plate, and the cut strips of chicken on the other. Then, I added the curry sauce on top of the chicken. To give a bit of colour to the dish, I chopped a spring onion and sprinkled it on top.

The katsu curry was delicious. We all enjoyed it together on Zoom, commenting about the different flavours and how we had adapted the recipe to suit our own taste. Some people used different vegetables than in the recipe, others enhanced the roux with wine and butter – same as me.

It was a wonderful online Japanese cooking class, and I am looking forward to joining the next one.