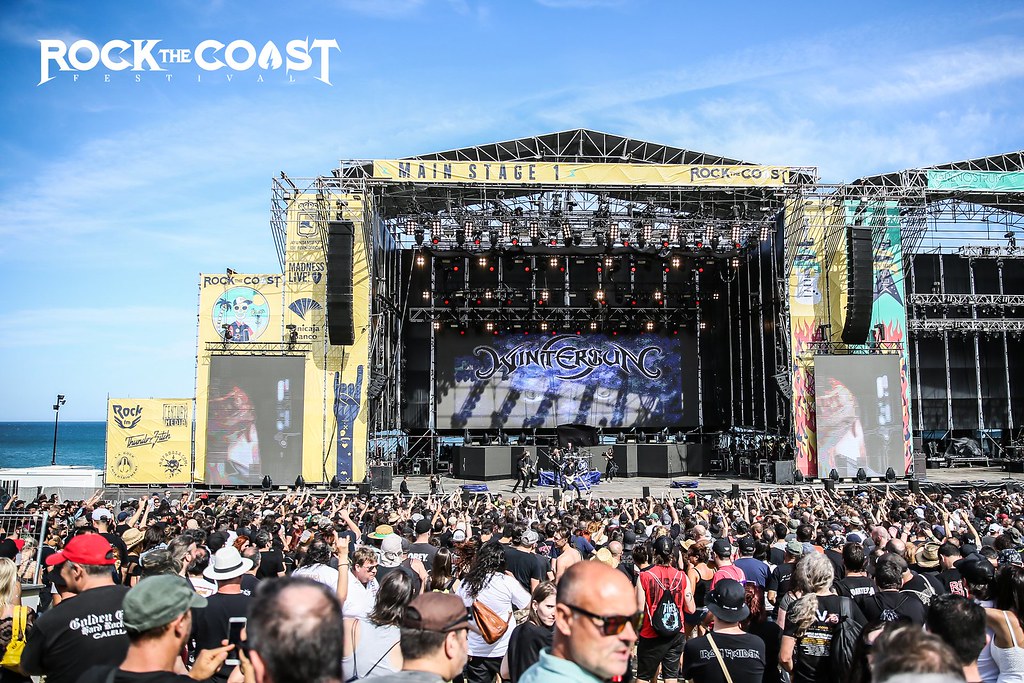 After two days of fantastic performances, the first edition of the Rock the Coast Festival closed its gates celebrating a success. 14,000 people gathered daily at the three stages from Marenostrum Castle Park to see and support their favourite bands.

The location of the festival couldn’t have been more perfect! With the ocean behind the two main stages and the natural incline of the Marenostrum event space, the public had privileged views, regardless of where they chose to sit. The stage from inside the Sohail Castle offered a unique setting and wonderful acoustic. 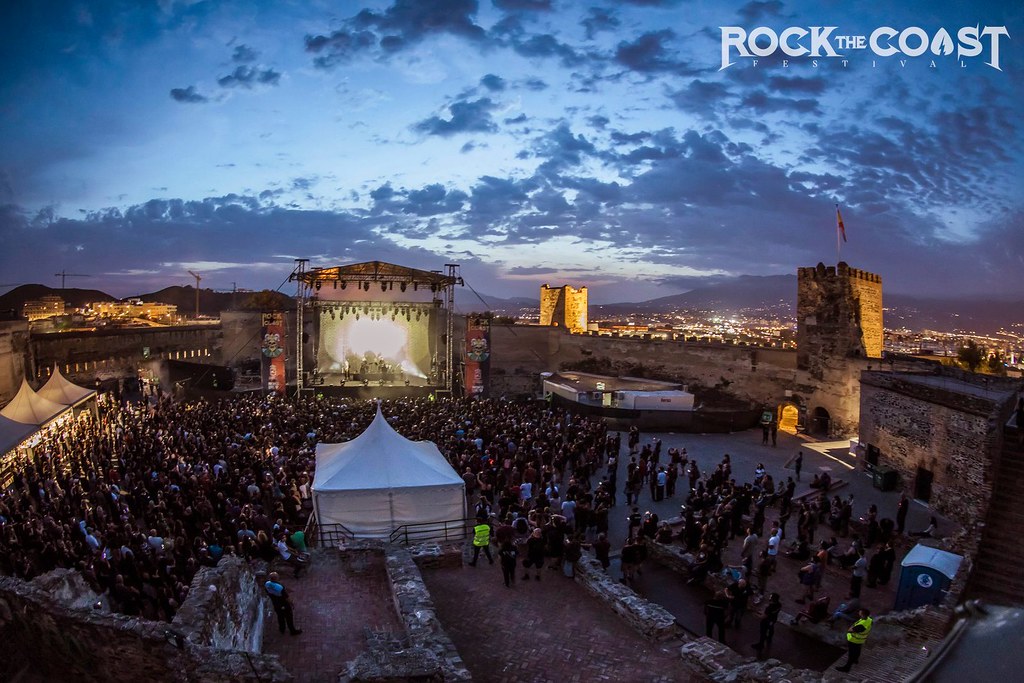 A new system of payment for drinks was introduced to the festival, where members of the public could add cash onto their access bracelets and pay with them, which I found excellent. Also, the 1 euro returnable charge for a glass was welcomed, preventing people from throwing them on the floor.

The opening of Rock the Coast Festival 2019 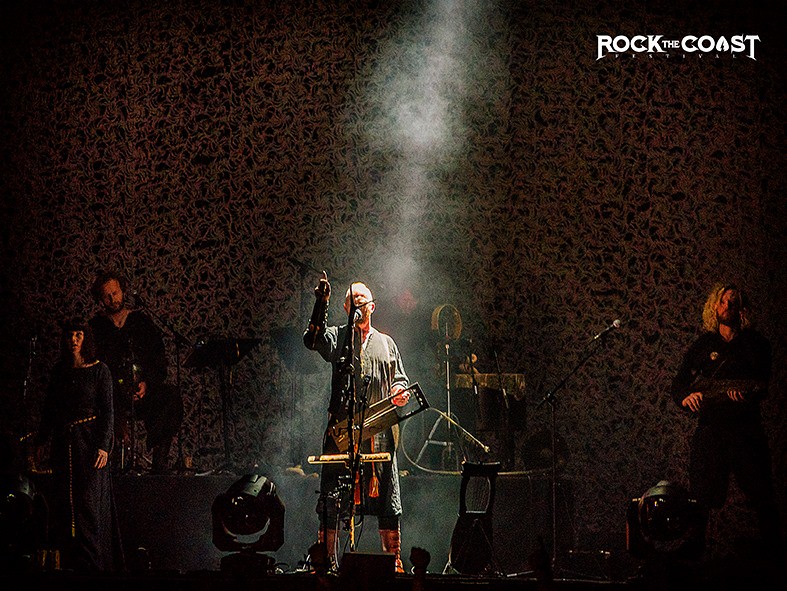 The festival debuted on the 13th of June with a special performance from Norway’s Wardruna, their first concert on Spanish soil. Fans of all ages waited at the gate hours before the doors opened and ran to get a spot in front of the stage. A large portion of the members of the public who came to see Wardruna were not Spanish and had travelled to Fuengirola especially to see their favourite band. Many of the attendees had decided to dress up for the occasion: there were people wearing all black outfits, women in corsets and men in tight leather pants and jackets. Other groups were wearing Viking tunics with horns hanging from their belts. A few men came to the concert wearing kilts. Black make-up and red lines painted on faces were very common.

Wardruna’s show was more of a ritualistic experience. As the lights dimmed and the reflector spots were pointed towards the stage, Wardruna’s show started, with two Scandinavian bronze lures raised into the air. For the next hour Castle Sohail was inundated with sounds of drums and horns, violins and old Nordic musical instruments, together with the powerful voices of Einar Selvik and Lindy-Fay Hella. It was a timeless performance, greeted with standing ovations and the audience’s request for Wardruna to come back on the stage and sing another song. 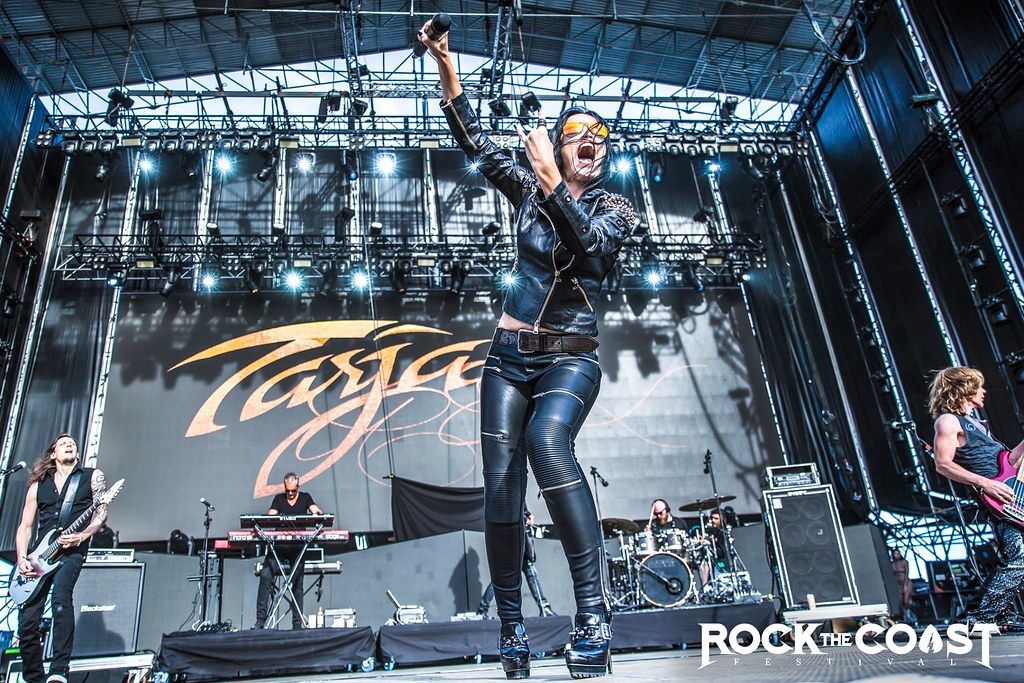 The first day of the Rock the Coast festival started with the Russian bank Arkona on the Main Stage 1, who came to the festival to promote their newest album. Meanwhile, the Castle Stage was taken over by the local Malaguena band, Thyrant. On the Main Stage 2 ex-Iron Maiden vocalist Blaze Bayley followed, performing a special set, celebrating the 25 years since he joined the famous heay metal band.  This unique show included famous Iron Maiden songs such as “Lord of Flies” and “The Clansman”, is only to be repeated at other festivals this year, and nowhere else after that. 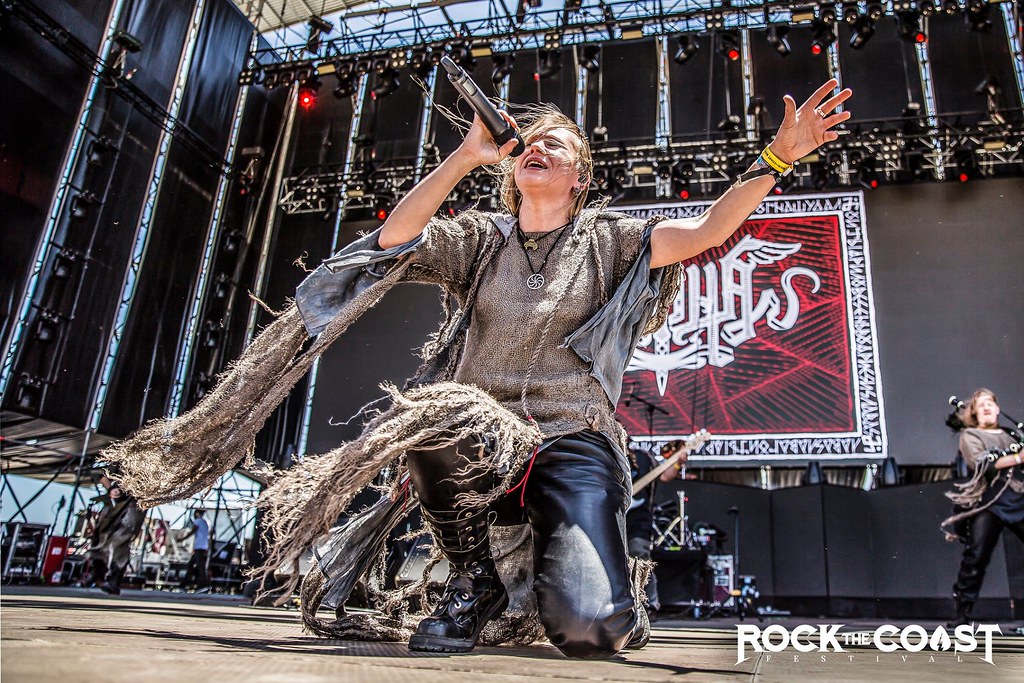 Sweden’s Graveyard followed with a hard rock performance on the main stage, with hits from their number 1 album “Peace”. Leo Jimenez, considered one of the best rock voices in Spain, rocked the second main stage, meanwhile, the Murcia based band Hitten performed a grand classic heavy metal show on the Castle Stage.

Wintersun paid a tribute to their self-titled debut celebrating their 15 years anniversary, with a special repertoire including “Winter Madness” and “Starchild”. Bloodhunter, on the Festival Stage, entertained the public with both music and stage presence.

UDO’s show included many of his classic hits, such as “Independence Day” and “They Want War”. Tarja was a delight, with her stiletto’s outfit, speaking to the audience in a fluent Spanish. She performed both her own songs and Nightwish hits. Over at the Castle Stage, the British band Absolva enchanted the public with their lively classic metal rhythms.

Probably one of my favourite shows of the day was put on by UFO. The band, recovering after the sudden loss of Paul Raymond – guitarist and keyboardist, gave the audience an emotional concert. Old hits like “Love to love”, “Rock Bottom”, “Lights Out” and “Doctor, Doctor” filled the audience with memories, especially knowing that this concert was part of the band’s farewell tour.

Even if they played at the same time as UFO but on the Castle Stage, Seventh Wonder attracted a large number of fans to their show who enjoyed their new releases from the newest album, “Tiara”.

Friday’s headline was one of the greatest rock bands in the world, the Scorpions, and they did not disappoint, putting on an incendiary show. When you think of the age of Klaus Meine & Co, you can only be amazed on how much energy there is in a Scorpions show! Songs like “Wind of change”, “Send me an angel”, “Bad Boys Running Wild”, “Blackout” or “Big City nights” did not miss from the playlist. Hearing all 14,000 fans singing together “Wind of change” was a special moment. Seeing Scorpions three times already, I knew that after the “first” ending, the band would return on stage, and I was not wrong. “Still Loving you” and “Rock you like a hurricane” ended the performance in the frenetic applause and whistles of the public. 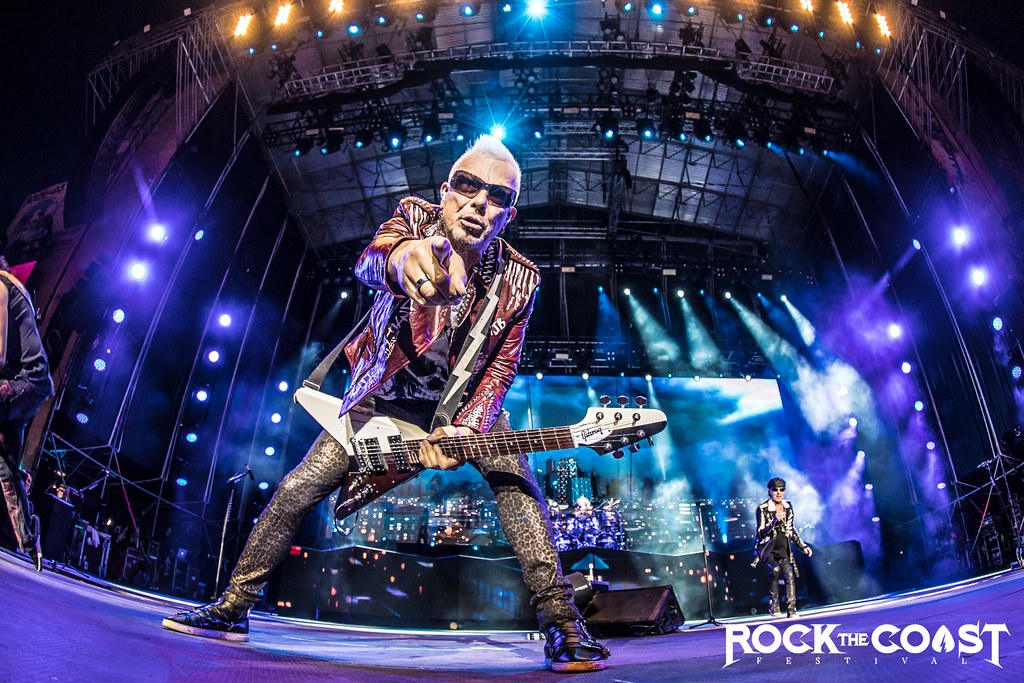 Whilst Scorpions finished their show with a bang, Europe took over from the Main Stage 2. And what a fantastic playlist, with classics such as “Carrie” and “Superstitious” but also new releases from the past 2 albums of the bans. As expected, the performance ended with “The Final Countdown”, which had the entire audience singing along.

The first day of Rock the Coast festival was ended by the melodic death metal sounds of Carcass on the Main Stage and the symphonic rock played by Débler on the Castle Stage. 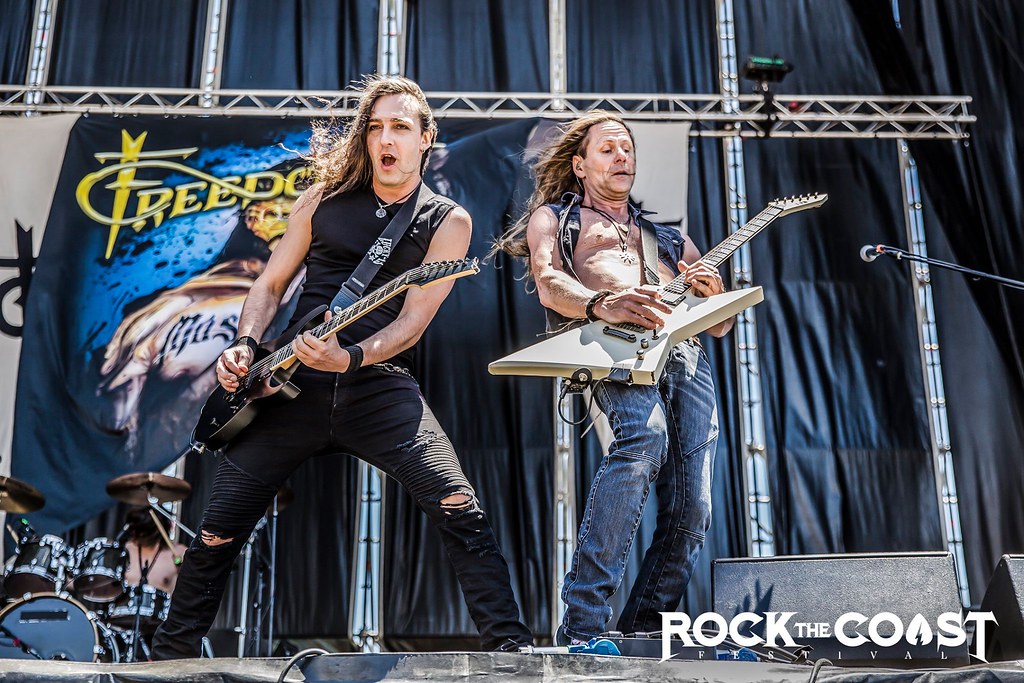 The second day of Rock the Coast Festival debuted with the Germans from Freedom Call on the Main Stage and local Malaga band Chaos Before Gea on the Castle Stage, both acts bringing modern sounds to the Fuengirola public.

Von Hertzen Brothers performed next on the Main Stage. The Finnish band mixes the classic rock sounds with progressive elements, folk and punk , and many of their singles reached the first position in the music charts, in their country.

The Holeum surprised the audience gathered around the Castle Stage with their peculiar post metal harmonic sound.

The Ukrainian band Jinjer was received with open arms by the public in front of the Main Stage, whilst presenting their newest album named “Micro”. They seem to be growing more and more in stature, after their attendance to many rock festivals around Spain and Europe.

It was Angelus Apatrida’s turn to take over the main stage and despite some technical issues, they delivered a fantastic show, getting the crowd to mosh around from the beginning. One of the most successful Spanish thrash metal bands who is recognised and loved all over Europe, Angelus Apatrida promoted their newest album at Rock the Coast. I interviewed them so you can learn more about their music here. 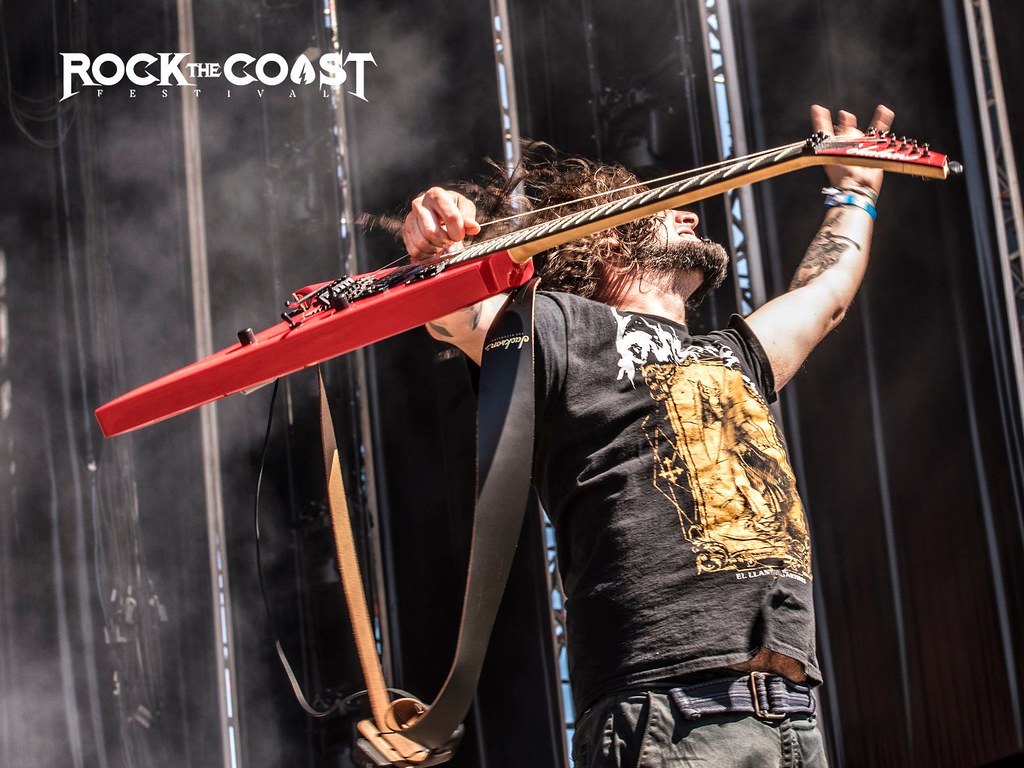 Siddharta, the local band from Fuengirola, followed on the Castle Stage, with a short but intense hard rock performance.  Considered as one of Gothenburg’s pioneering acts, Dark Tranquillity’s playlist included a trip on the memory lane, with tracks from their most successful albums released since 1993.

Hypno5e offered a very interesting performance on the Castle Stage, with a sound that they define as being “Cinematographic metal”. Their style incorporates acoustic guitars and touches of classic music.

The rock veterans from Magnum took over the Main Stage 1 enchanting their fans with rhythms of many of their hits. From the playlist didn’t miss “Do Not Wake the Lion”, “Sacred Hour”, “Sacred Blood” or “Lies”. 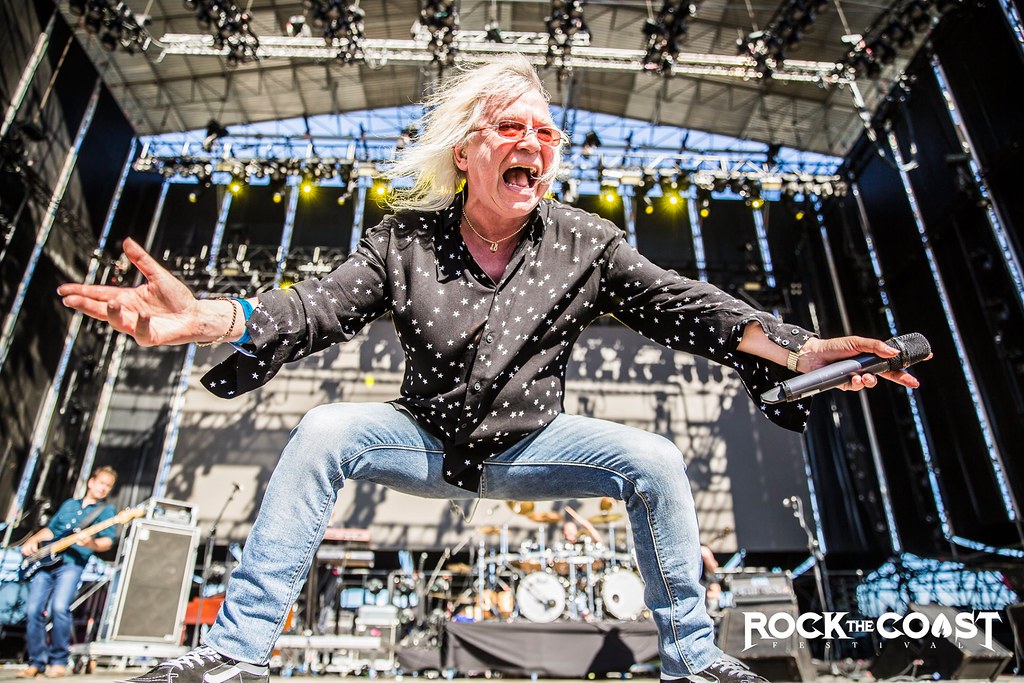 Crisálida is a very known Chilean metal band who opened for Deep Purple, Anathema, The Crimson Projeckt and many others. At Rock the Coast Festival they focused their playlist on tracks from their latest album, “Terra Ancestral”, inspired by Chile’s rich history.

Opeth offered a perfect performance, including many of their classic tracks on their setlist. The progressive metal band from Stockholm just released their 13th album. 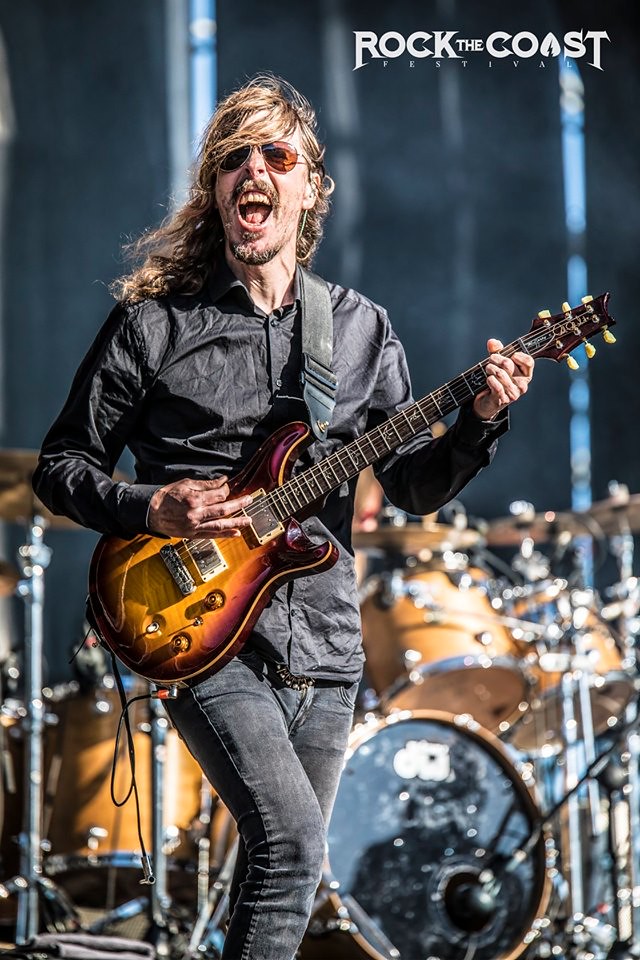 Originally from Pamplona, Taken played tracks from their first album but also from the just released “Unchained”.

Ritchie Blackmore’s Rainbow was the highlight of the evening, well waited by fans of all ages. The show was phenomenal, with the powerful and energetic voice of Ronnie Romero and the magical string touches of Ritchie Blackmore. The harmony on stage and the dialogue between Ritchie, Ronnie and the audience couldn’t have been more perfect. Timeless songs such as “Since You’ve been Gone”, “Stargazer”, “Man on the Silver Mountain” and “Smoke on the water” made this performance historically memorable. 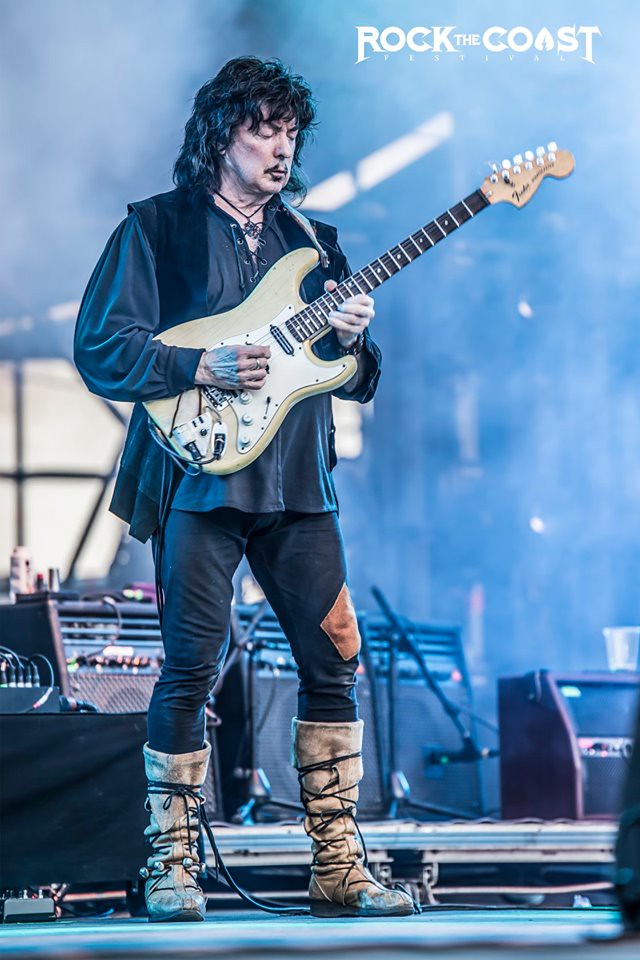 Twelve Foot Ninja played in parallel with Rainbow, on the Castle Stage. Even so, they still managed to attract a few fans to hear them play their experimental funk metal.

Renewed for their live shows, The British from The Darkness performed their classic songs which were received with standing ovations by the public in Fuengirola.

On the Castle Stage, Conception unfortunately had sound problems which delayed their performance for quite some time. However, they still managed a good show, promoting their newest EP, “My Dark Symphony”.

Michael Monroe gave the audience a legendary show, full of energy, with a varied playlist including hits from his Hanoi Rocks times.

The festival was closed on the Main Stage by Mayhem, a cult group with a tumultuous history. One of the founders of the Norwegian black metal scene, Mayhem brought their notorious live performance on stage at Rock the Coast Festival and did not disappoint their audience.

Dry River ended the show on the Castle Stage with a crazy performance and an even crazier and hilarious choreography. 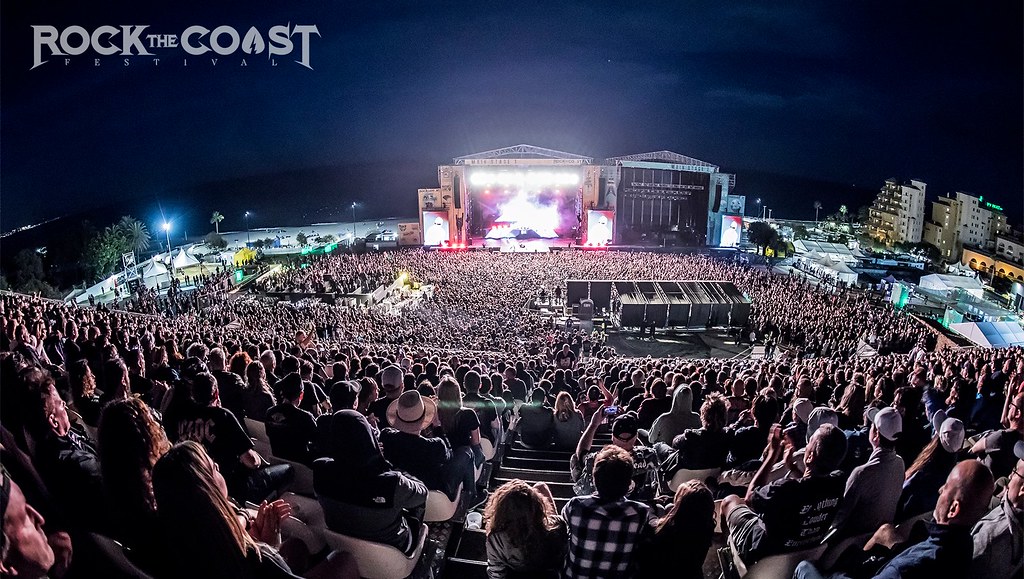 And so, on Saturday night, the gates of Rock the Coast have closed, making the first edition of the festival a total success.

Disclaimer: Please note that I have attended the Rock the Coast festival as press.