Havana has not one but TWO zoos! Who knew? One Sunday afternoon, we decided that it was time to find out what they were like.

First stop, the Zoo of Havana, situated opposite the Viazul bus station. After paying our entry fee of 3cup (for local people – about 15 cents) or of $3 (for foreign folks) we were in what seemed like a very traditional zoological garden. Think leafy paths, traditional iron cages for the animals, informative signs. The inmates were pretty typical too: chimpanzees first, then big cats, plenty of monkeys, an assortment of tree-dwelling rodents, lots of zebras, a brown bear and an Australian bird called a cassowary which looked like it wanted to kill us. The Cuban influence was clear from the chimps who had learned to make that ubiquitous kissy mouth sound to get the attention of the crowd, and when ordered to ‘dance’ by their trainer, basically twerked. Flirtatious twerking chimpanzees – only in Cuba. 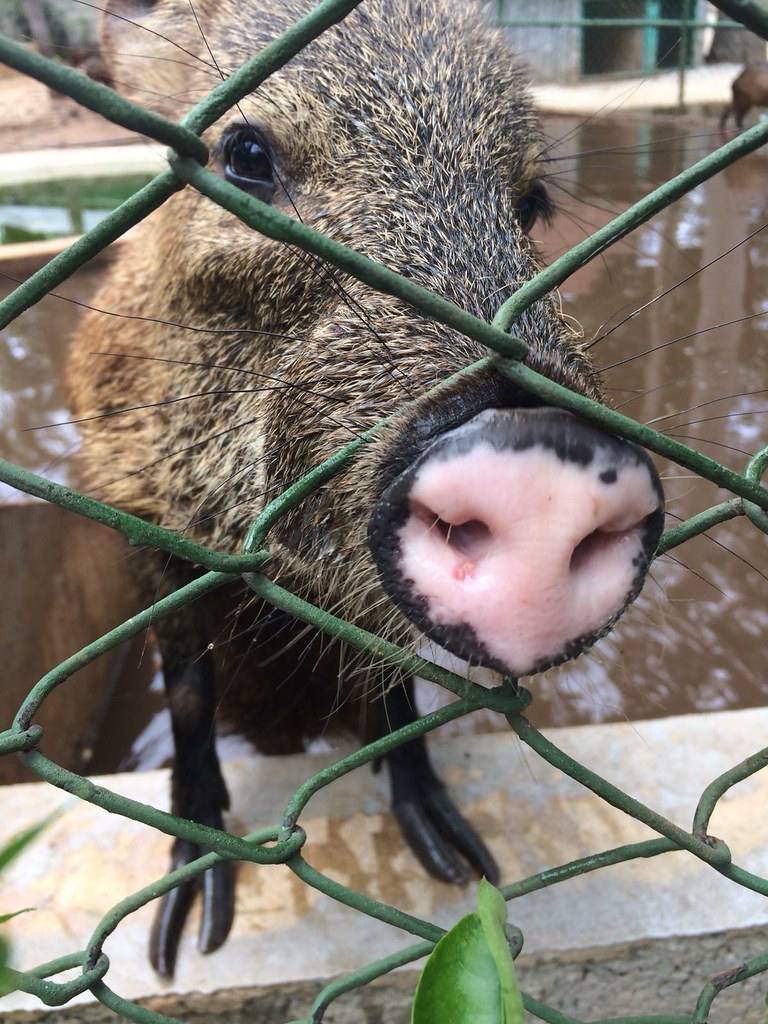 Zoos, especially city zoos, are always an emotive issue because of the standards of animal care; there were times when this place made me feel a bit uneasy. Whilst none of the animals we saw seemed distressed or badly cared for, many of the cages were small, with hardly any shade and with very little space. The bear enclosure seemed particularly brutal – all concrete with no trees, for a beast used to roaming around in the forest. The leopards were pacing around in a tiny cage and the hyenas, which I am pretty sure enjoy a long run every now and then, barely had the space for a gentle trot. Whilst there were plenty of signs around explaining the animals’ habitats and habits, I didn’t see much by way of conservation work or animal care. I think the hippo had the best accommodation – a long curved lake with plenty of room to swim around and an obliging zoo keeper literally shovelling the food into hungry hippo’s open jaws. The warthogs looked pretty happy too, in a large paddock with a massive mud bath. 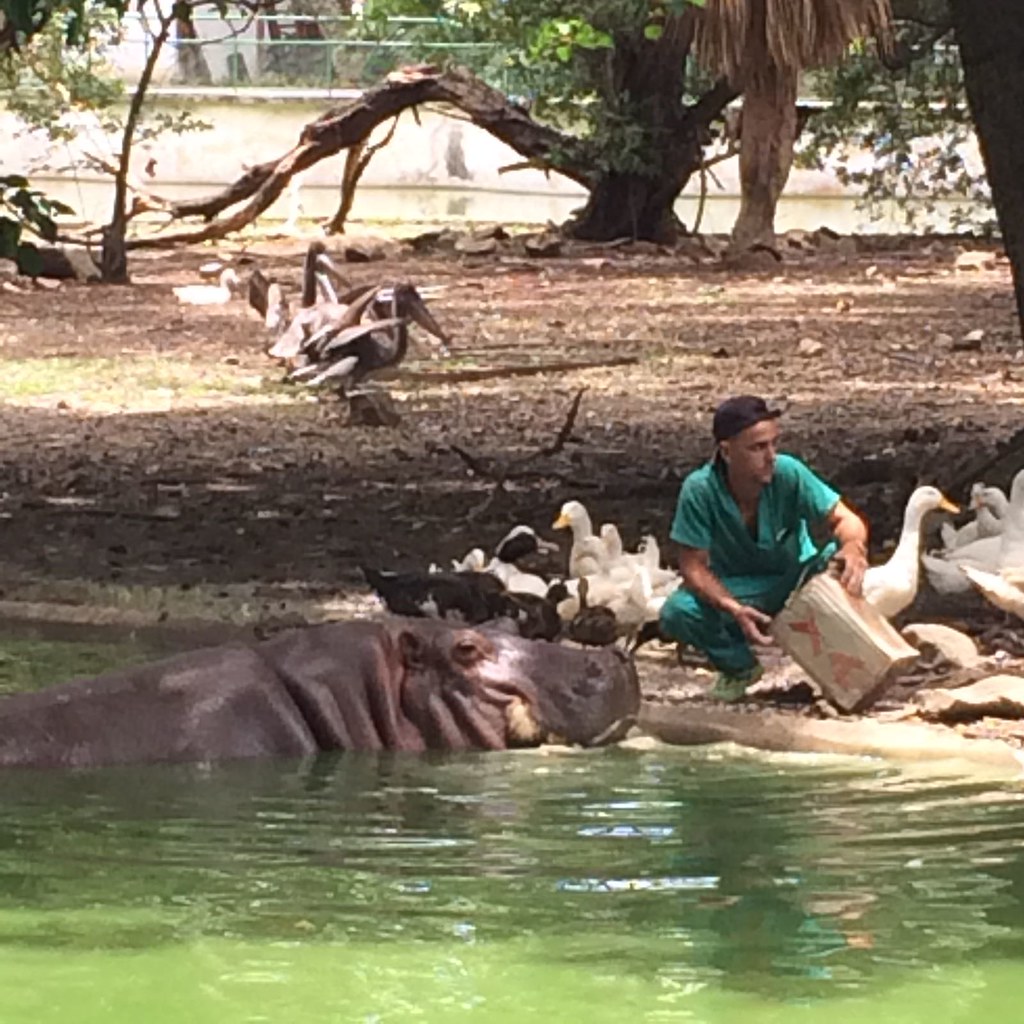 Ironically, the best thing about this zoo was the people, not the animals. It often strikes me here, that there is not the sense of lifestyle and leisure that exists in first world countries. In Havana in general, I rarely see local families enjoying the balmy climate and parks, relaxing and strolling around as they do in cities in other parts of the world. However, the zoo had a different atmosphere. There were loads of play areas for children, snack bars, people strolling and chatting and enjoying what looked like quality family time. It was really pleasant to see and was probably the most appealing part of this zoo. If you were visiting Havana, and wanted to see local people on a day out without hordes of tourists, this would be a great place to do it.

It didn’t take long to visit most of the animals here and so we moved on to our second animal encounter of the day – the National Zoo of Cuba, a huge 340-hectare park which is located about 25 minutes’ drive outside of the city. It wasn’t easy to find (minimal signage on the roads is a real issue for me here!) and involved driving through a tiny village, but once there, it seemed a well-maintained place. This zoo is much more of a safari style experience, where animals cohabit where possible and where you can see them in more natural environments. Apparently, there is a conservation and breeding program at work here too. 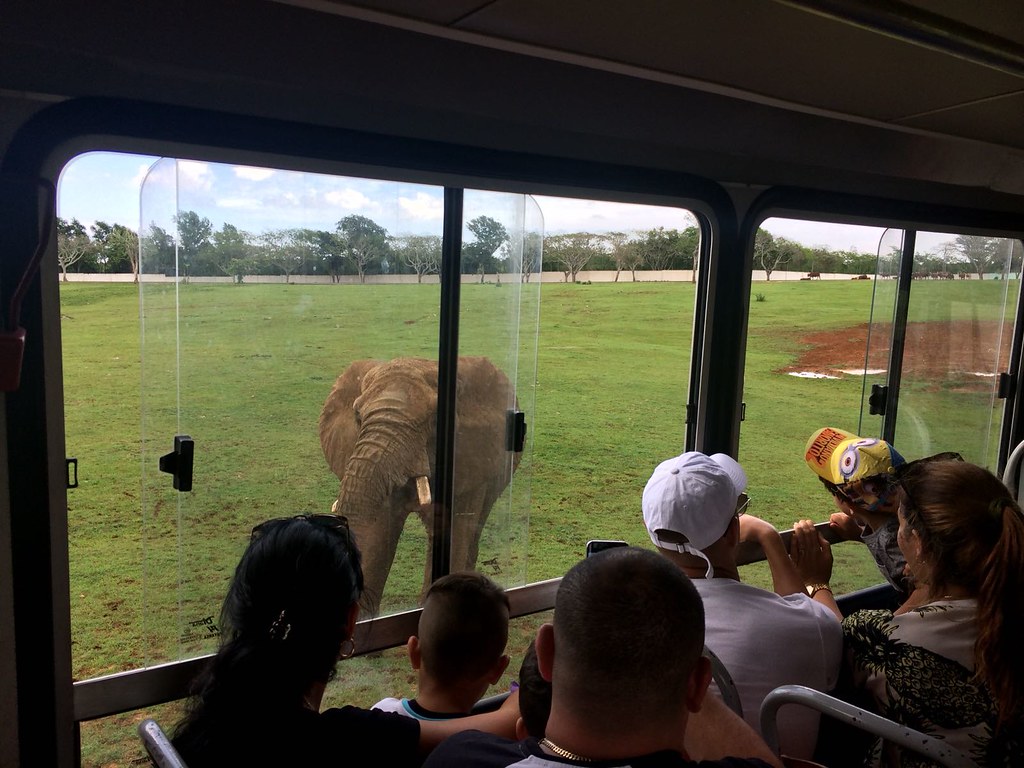 After buying tickets which, pleasingly, are priced at a more-or-less affordable level for some of the people who live here, we started with the bus tour. About 24 people were loaded onto what I can only describe as a glorified milk float, and driven into a huge paddock. Here were the apparently happy cohabiting creatures – two elephants, about 6 rhinos, four giraffes, tons of zebras… basically the plains of Africa in miniature. The bus driver had clearly done his driver training in a banged-up taxi in central Havana. He screeched around the bends of the single-track road, slammed on the brakes when a hapless creature wandered into the path and then honked aggressively to encourage said creature to move on. The animals seemed unconcerned by this (in the nonchalant style of most Cubans faced with these driving habits, actually) and as a result, we got up close to plenty of them. The elephant even seemed to be waiting by the side of the track to have his picture taken. The lion enclosure was next, and with two groups of adult lions, it offered plenty to look at. Again, these animals looked healthy and rather beautiful – especially the ones we could see from a distance, lurking in the shade under a large rocky outcrop and watching the bus intently. Possibly the most alarming moment of the tour was when a lioness stalked the milk float and then attempted a claws-out leap at the back of it. The guide on board seemed pretty relaxed about it… and just mentioned that we might want to shut the windows. 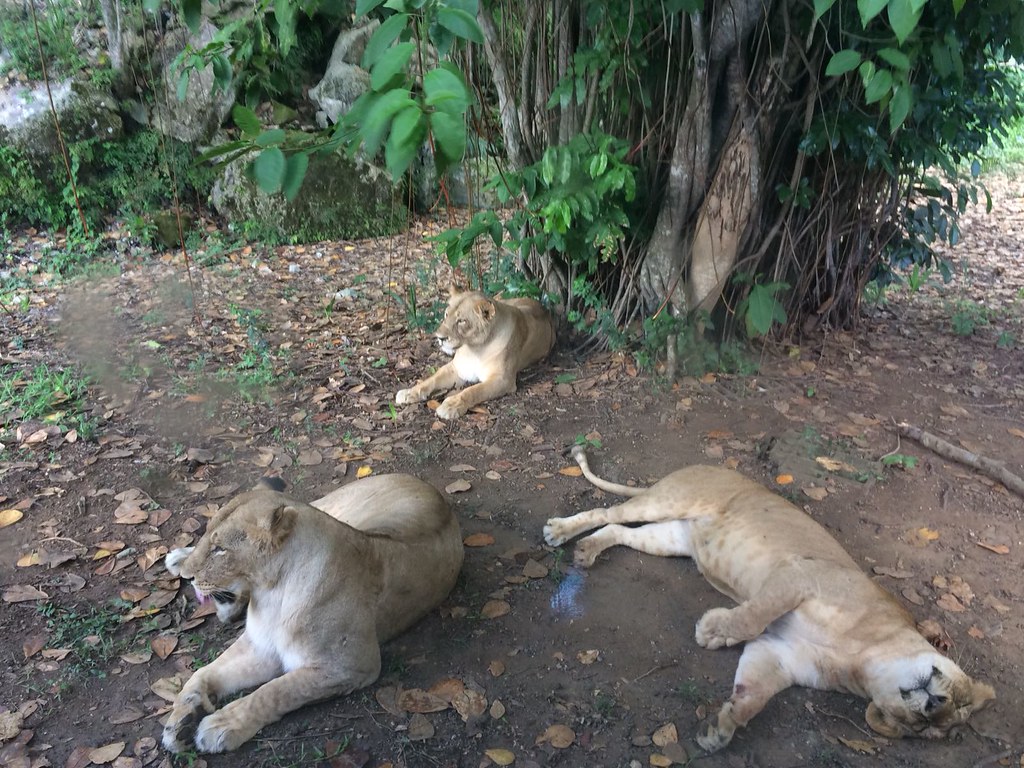 After the bus ride, there was then the option to drive into the park and enjoy rolling green fields, the lake, more children’s attractions and snack bars. Again, the whole place had the feel of a relaxed, family-friendly park – there were even rowing boats for rent, donkey rides (on happier donkeys than the horses used for similar purposes in Viñales), and… a camel. It would be a perfect place to take a picnic and spend the whole day enjoying the sunshine – and so close to Havana as well. It would definitely get my vote as the better of the two creature experiences. We are yet to visit the aquarium…