Fuengirola, prepare! The hottest festival of the summer is about to open its gates to the rock music fans in just less than two weeks! Featuring huge classic rock bands such as the Scorpions, UFO, Europe and Ritchie Blackmore’s Rainbow. The first edition of Rock The Coast Festival is about to take over the medieval Sohail Caste and the Mare Nostrum Park.

Rock The Coast festival will open on the 13th of June with a special performance from the Norwegian band Wardruna on the stage from inside Sohail Castle. The band, known for creating the fantastic soundtrack of the Vikings series, will be playing for the first time in Spain. Wardruna promises an outstanding show that will bring Norway to the shores of the Mediterranean Sea through the traditional historical primitive instruments the band is using to create their music. 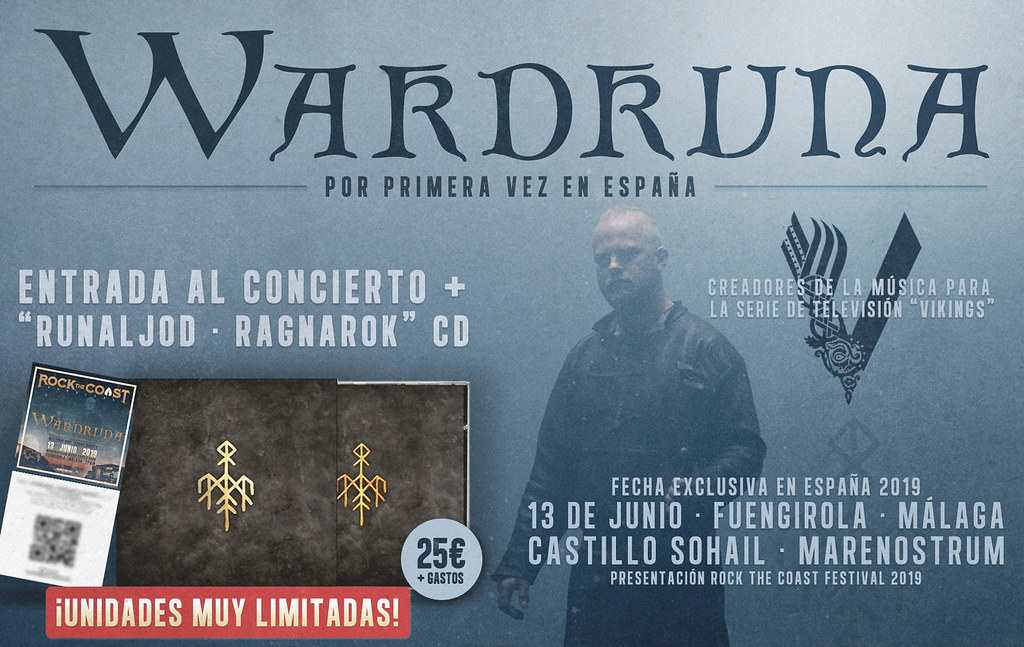 One of the headliners of Rock The Coast Festival, performing on the 14th of June on the Main Stage 1 is the legendary Scorpions, who during the years marked many generations. Their “Wind of change” was not only a terrific rock ballad but also a symbol of a free and united Europe. Scorpions had many hits during their over 50 years carer in which they sold over 100 million albums, among which everyone will recognise “Still loving you”, “Holiday”, “Rock you like a hurricane” and “Dynamite”.

Ritchie Blackmore’s Rainbow, another headliner of the festival, will only perform four concerts in 2019, and one of them being at the Rock The Coast! The founder member of Deep Purple will delight its fans with classic songs such as “Stargazer”, “All night long”, “Perfect strangers” and “Smoke on the water”.

Rock The Coast festival is also one of the last chances to see UFO performing live, as this is their last tour before retiring, after 50 years on the rock music stage.

80% of the Rock The Coast festival tickets have already been sold, so don’t wait any longer before grabbing your two-day pass to this summer’s hottest weekend! Click here to buy your ticket before they are sold out.

This week I had a chat with Juan Antonio Muñoz, the Director of Rock The Coast Festival:

TWIP: Why did you choose Fuengirola as the location for the Rock The Coast Festival?

Juan Antonio Muñoz: Fuengirola is the perfect location for a festival. Beautiful venue/surroundings, marvelous weather, beach just behind the main stages, perfect transport connections – airport is just 20 mins aprox from venue-, many accomodations available close to Marenostrum, a Castle inside the venue and a long etc… If you’re coming, you will see how many facilities you have just around the corner.

TWIP: The line-up for the festival is legendary, with bands such as Scorpions, UFO, Ritchie Blackmore’s Rainbow and Tarja attending. What special performances are going to treat the classic rock fans during the two festival days?

Juan Antonio Muñoz: UFO is doing its farewell tour, that’s truly a last chance to see them on stage. Rock the Coast is one of the only four dates Blackmore is playing in 2019, so it’s really exclusive and special too. And, although you don’t mention, Blaze Bayley show is based only in Iron Maiden classic song of his time in the band, so you can just expect a great show of Blaze too.

TWIP: Can you tell us more about the opening of the festival, the exclusive performance of the Norwegian Group Wardruna and why fans should attend this limited capacity show?

Juan Antonio Muñoz: This is gonna be the first show of Wardruna in Spain, in a marvelous location like Sohail Castle is. It’s gonna be magic, during the night, inside a real ancient castle… Fans can barely imagine how it’s gonna be for sure. Wardruna is a special band itself, their shows are beyond music, it’s ART. You can feel the culture of Norway, you can almost see their forests just listening to them. I really cannot wait to see them, and every fan should never miss a show of Wardruna if they have the chance.

TWIP: What are your expectations for the first edition of the Rock the Coast Festival?

Juan Antonio Muñoz: I wanna give the best possible experience to all fans attending Rock The Coast, see people having fun and coming back next year!! We really want to establish Rock The Coast as a new festival every year from now on.