Another early morning, another local bus to catch. This time though we had to walk with our backpacks on for quite a while, to the bus station and back, being unable to find where the bus was picking us up. We went to the bus station while the bus went to the hotel. Finally we found each other and, with Chocopie provisions, another half a day passed before we arrived in Udaipur. However, whilst until now we traveled mostly though desert, now we were crossing mountains and forests and we could see lots of monkeys jumping from tree to tree or just hanging around by the side of the road. 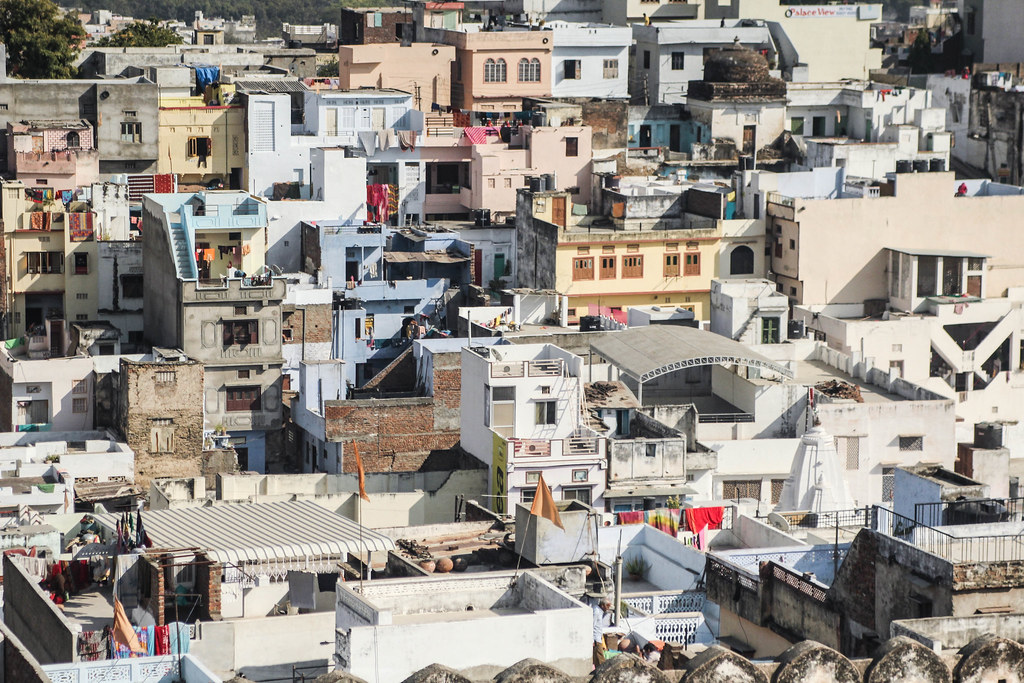 Udaipur is a beautiful city which surrounds part of Pichola Lake. It’s famous for the Taj Lake Palace, a luxurious five star hotel which covers an entire island on the lake. Udaipur is a very popular touristic destination and that’s why most of the Palaces have been converted into luxury hotels. The city centre itself is small, with narrow streets, many leather shops, and white buildings. If you wonder around the mazy streets you will encounter lots of people inviting you into their shops, to see how they paint elephants, camels and horses on silk and buy their work. The town has a certain charm, it’s different than the ones seen before.

For some reason, here things don’t seem to be that pricey for tourists and also people don’t insist that much to drag you in their shops to buy something. We spent the remaining of the afternoon having an informative tour of the city and I went through some scary moments when the ATM refused my card. I spent lunch between eating some “western food” (can’t remember what) and being on the phone with HSBC due to them making a “small” error, mistakenly my debit account with my credit one. 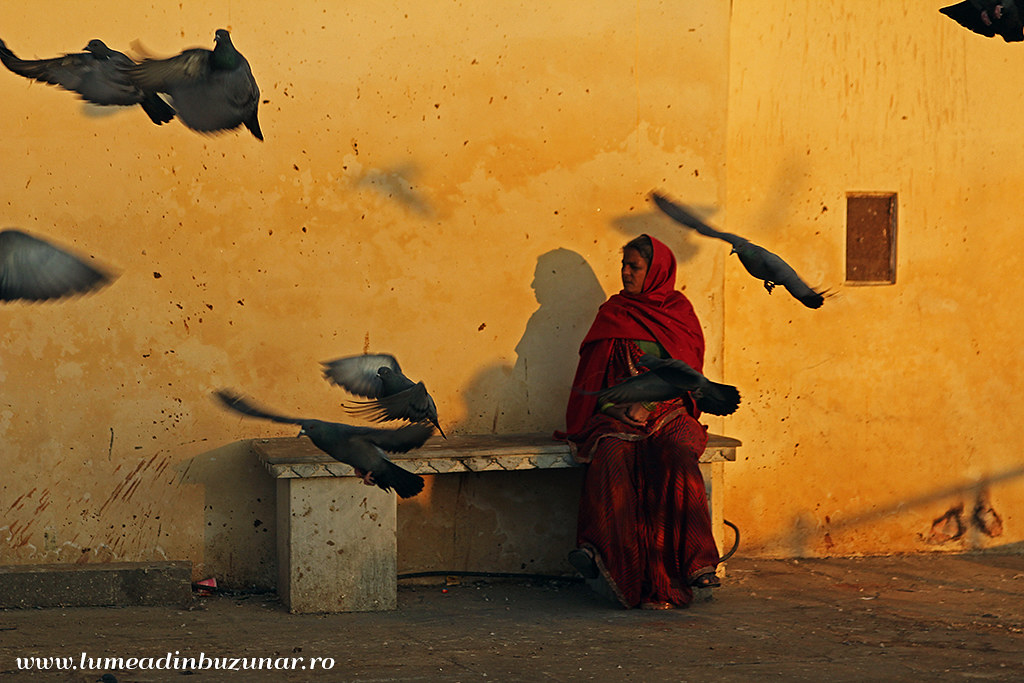 The sun was about to set when we got to the Gangaur Ghat, to watch it.

Soon after, we rushed to the Bagore Ki Haveli for a traditional Rajasthani dance show. We had special seats, above the scene, as we were a bit late. The performance was stunning, ending with a woman carrying on her head no less than 11 pots! 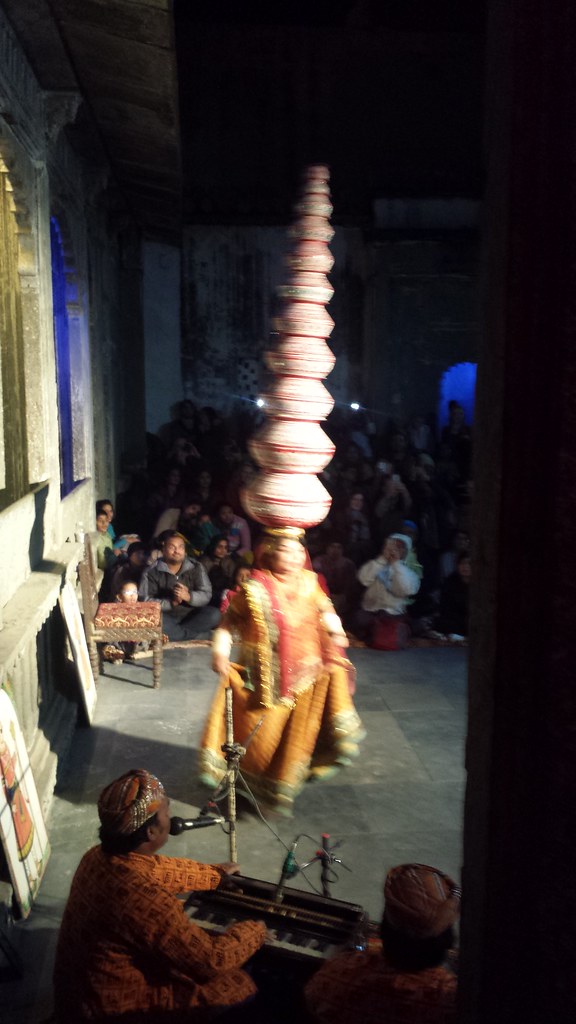 We had dinner in a rooftop restaurant with a beautiful view above the lake and after we returned at the hotel.

The next day was free for exploring. We all had breakfast at Govinda’s Cafeteria, a small cafe near the City Palace. Now let me tell you, if you didn’t have masala omelet at least once in your life, you don’t know what a good omelet is! I was hungry so I went for a masala omelet, a honey and lemon pancake, a proper coffee and a bottle of water. The price for all this? About £2. Taste? Delicious! 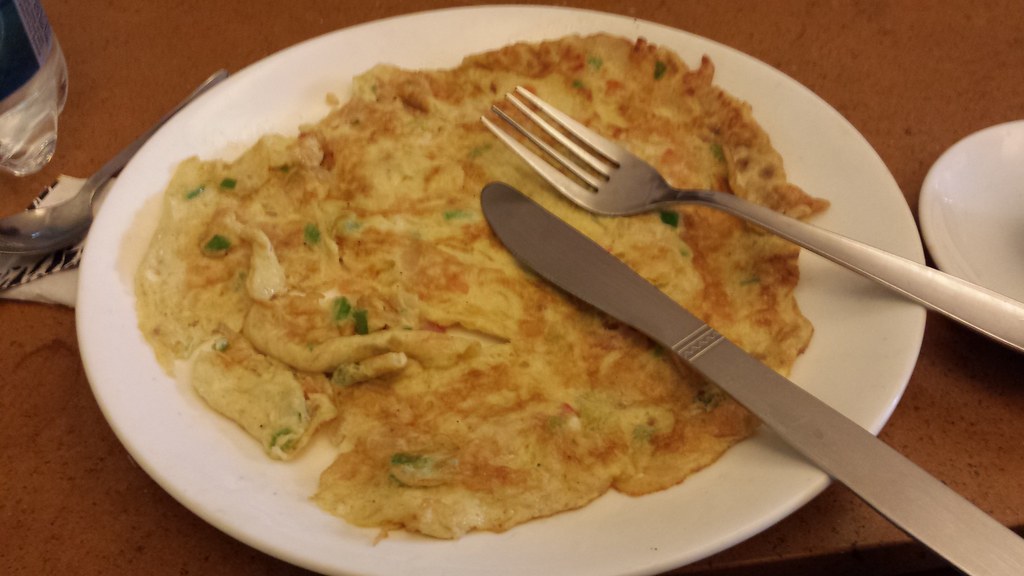 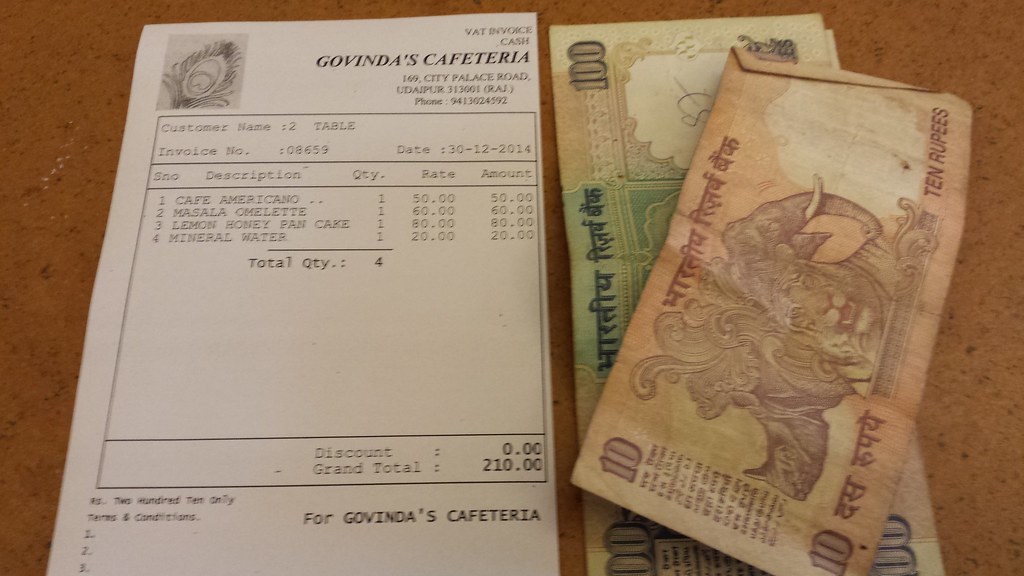 After breakfast we started our boat trip on the beautiful Pichola Lake. We passed through the impressive gates of the City Palace and heading down, through the gardens, to the boat docks. Even if it was sunny, the area was still surrounded by a thin, white mist. We have been given life vests and hopped on the tiny boat, towards the beautiful Jag Mandir. The boat was sliding slowly on the surface of the water, while daily life bits were passing before our eyes: women doing their washing up alongside tourists gazing at the lake panorama, kids bathing and playing in the water. The architecture of the town is impressive, whit white tall blocks of columns, carved windows and cupolas. 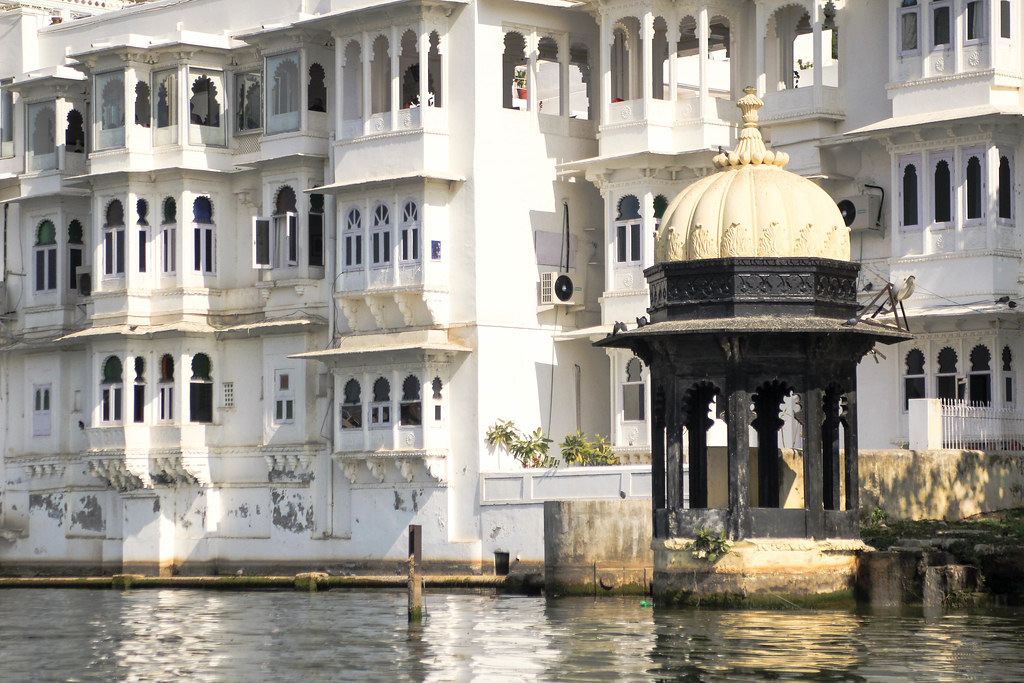 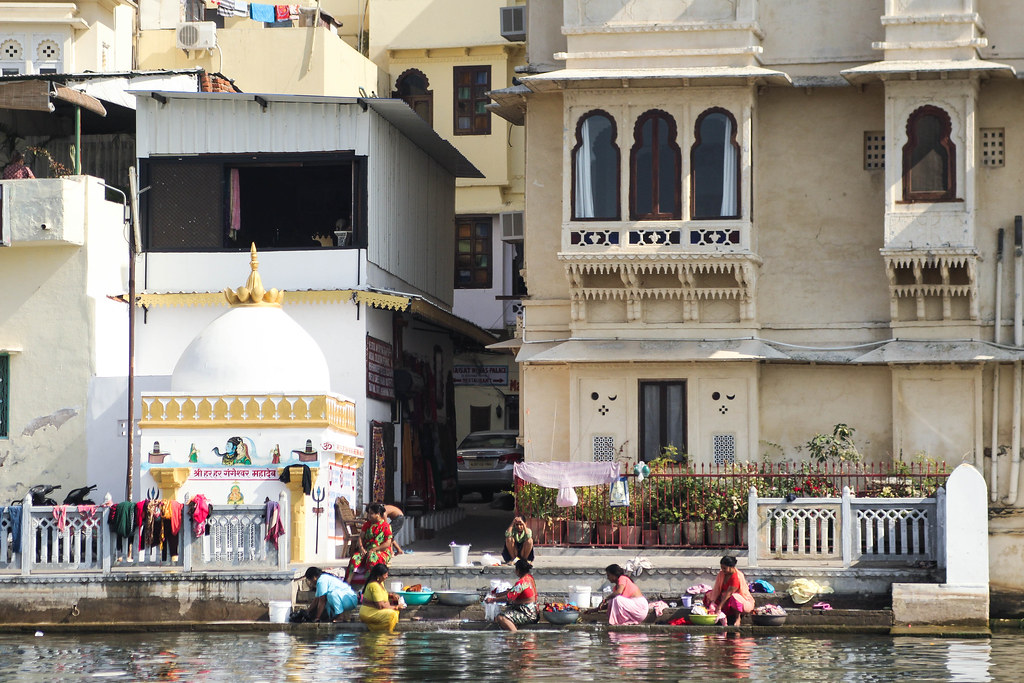 Jag Mandir is a palace built on a natural island, and it’s entrance is guarded by eight elephant sculptures. It faces the City Palace and has a landing jetty, for the boats to dock on. Tourists are allowed only in the Courtyard, the rest of the Palace being converted in another luxury hotel. But even so, the trip is not disappointing. Half of the entrance courtyard is covered by a beautiful garden where both flowers and small animals live. 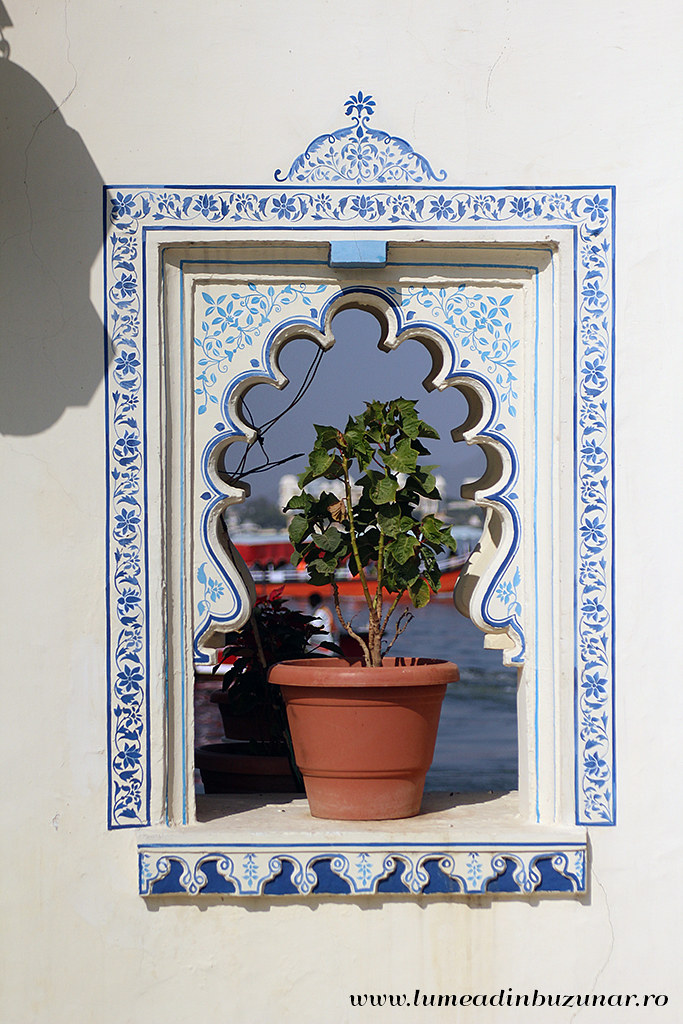 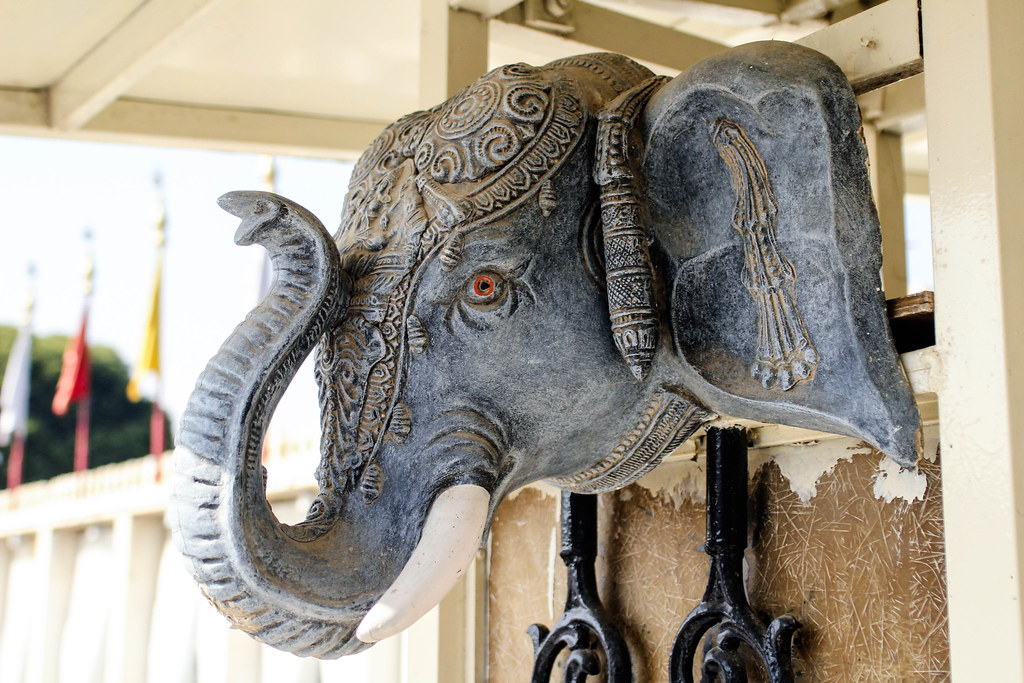 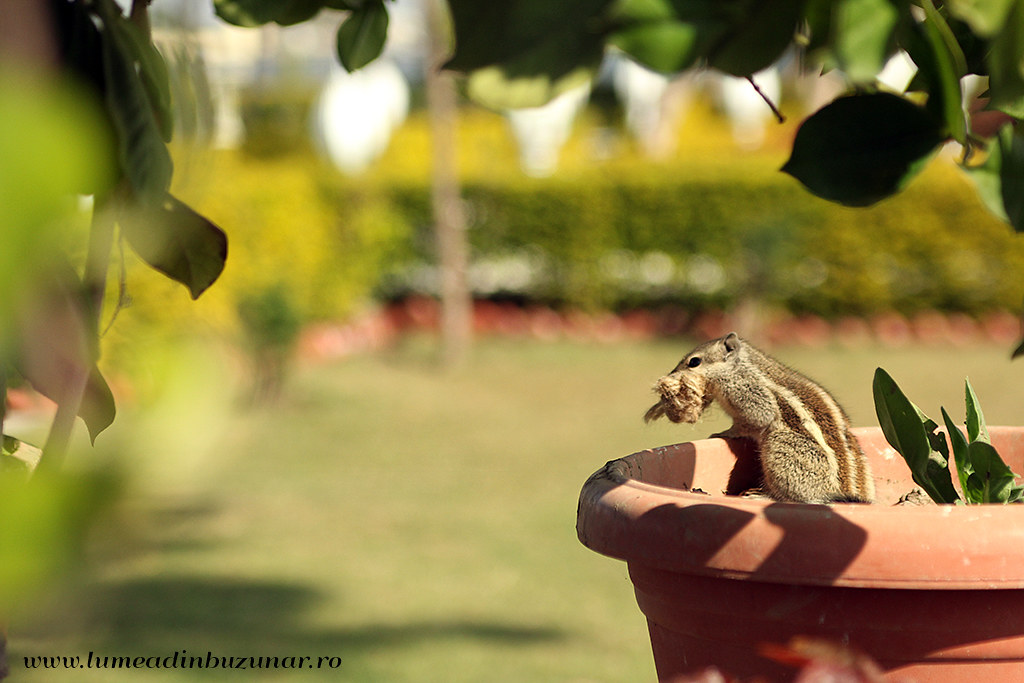 Because it was a free day, our big group split – each going towards different activities. I remained with John to go in a more in depth visit of the City Palace, followed by a relaxing cheap and very relaxing massage (250 rupees – £2.5).  A girl no older than 14 took away all the tension in my back muscles, after all those days of carrying the backpack. 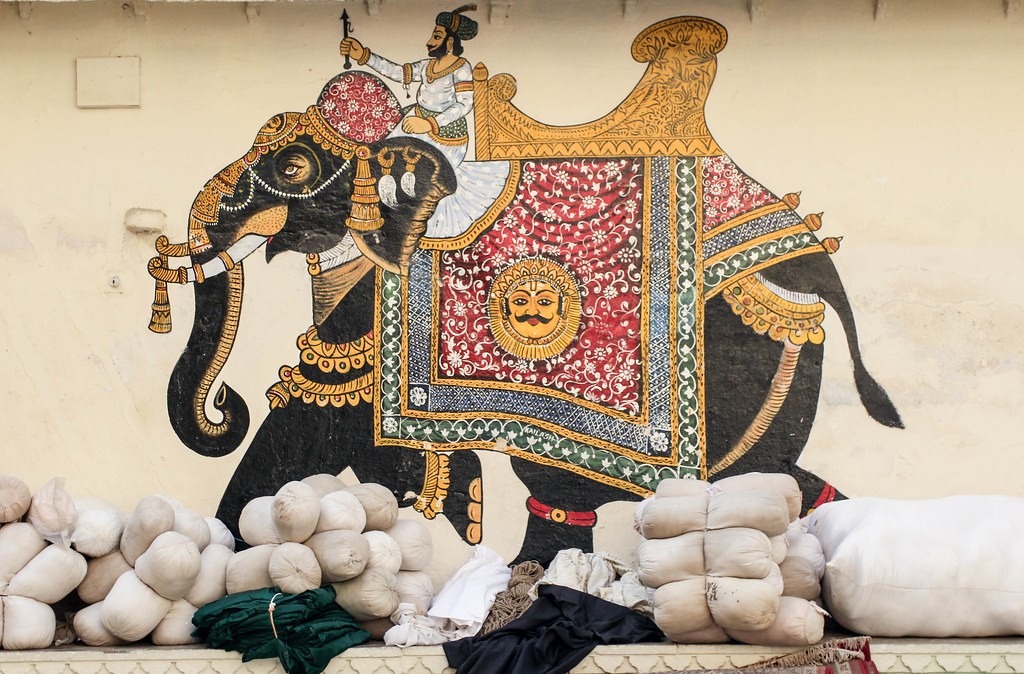 Later, I joined a yoga class, recommended by Lonely Planet. It was the first time I was doing yoga and I liked it. The instructor took time to explain how to do each pose and more important, why doing it that way. And I have to say, with this class in mind, after coming back to the UK, I started to go to Body Balance classes – which is a combination of yoga, tai chi and Pilates and I applied the knowledge I’ve learned in India. 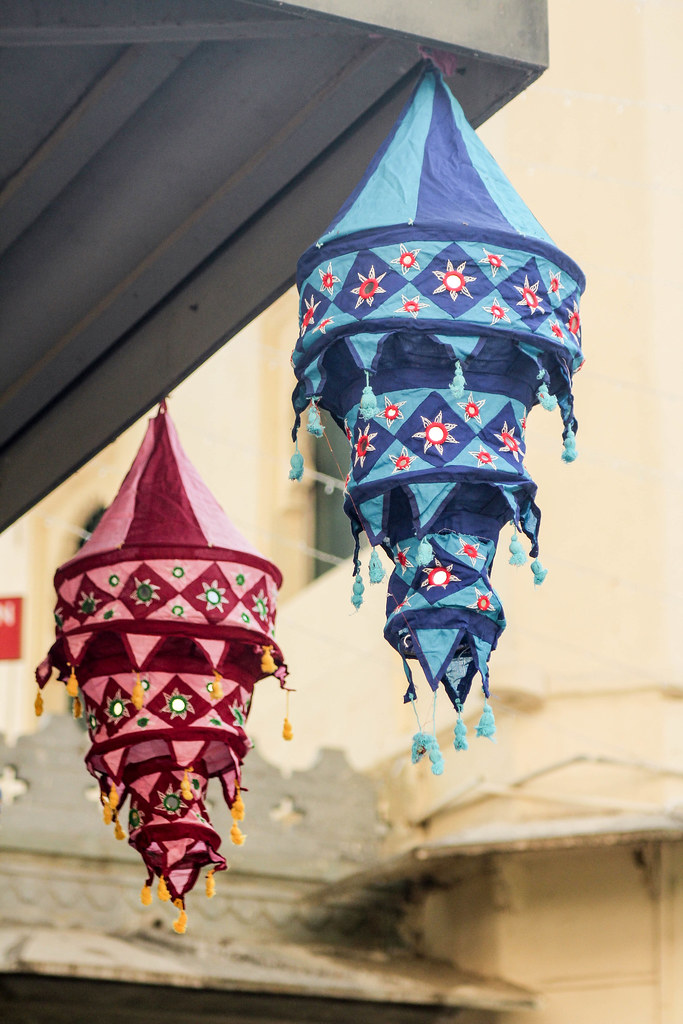 The rest of the afternoon we wondered around, stopping by Govinda’s Cafe again for dinner.