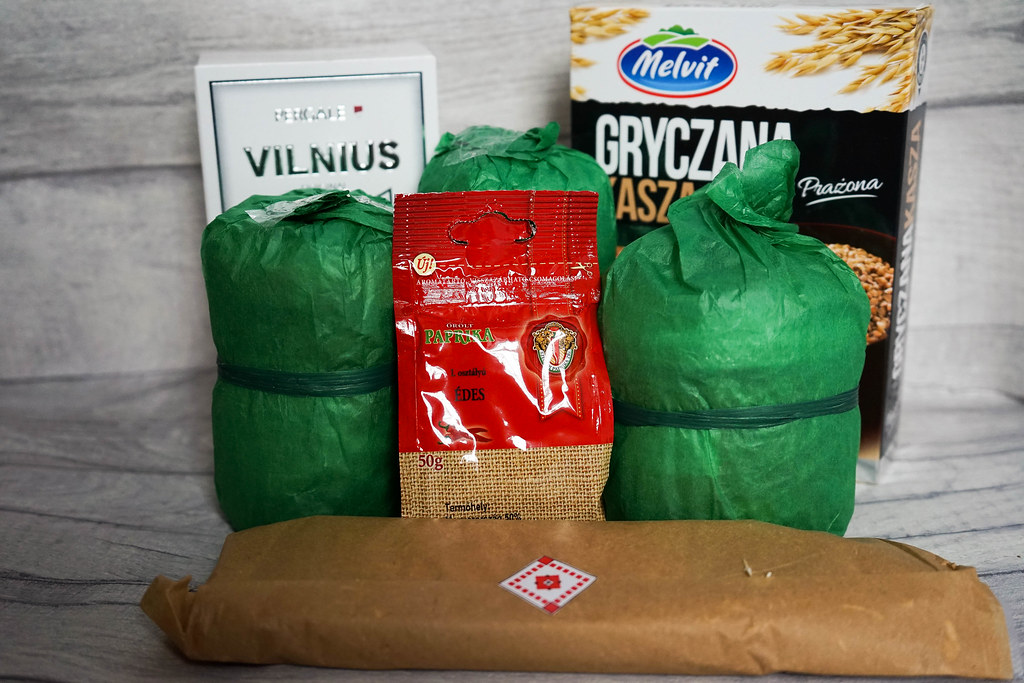 I have first heard about Zacuska months ago, when I’ve seen one of their ads on Facebook advertising a unique Eastern European food subscription box. As I am from Eastern Europe I was curious, so I subscribed to their newsletter, waiting for the big announcement date when the project would launch. Months passed through and nothing happened, I even forgot about it, until one day in November, when an email arrived in my inbox, offering me a 50% discount on the first box. I was sold, and I bought one straight away. You can choose from a classic box or a vegetarian one which I think is a nice touch. 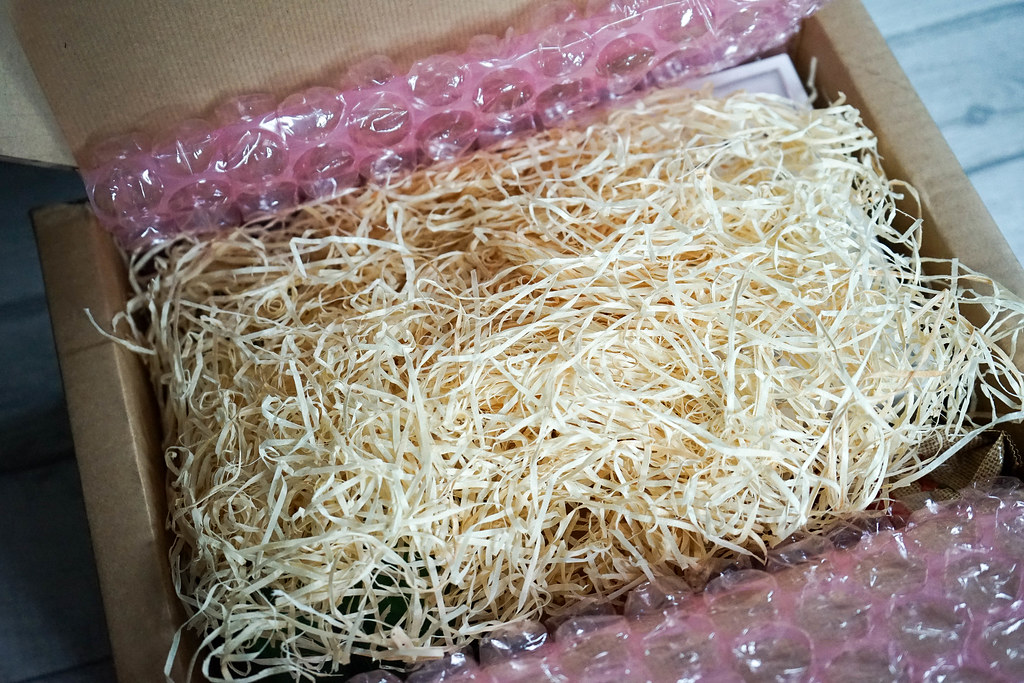 The boxes were sent at the beginning of December and arrived a couple of days later. As usual, I missed mine because I was not home that day, but I managed to rearrange the delivery. I was very excited to open it and see what goodies were hiding inside. For everyone who doesn’t know, Eastern European food is delicious and rich, based on meat and spices. I am familiar with the products from my home country and I was looking forward discovering the flavours of our neighbours.

The box was quite heavy when the courier handed it to me, which is always a good thing. It was sealed with a beautiful sticker with traditional motifs on it. As I opened it, I noticed that all the fragile items have been packed in an extra layer of bubble wrap and green packing paper, covered with a layer of fake hay. Easter Europe’s traditional food has developed in the country side and still many people are involved in agriculture, so I thought this was a really nice touch. 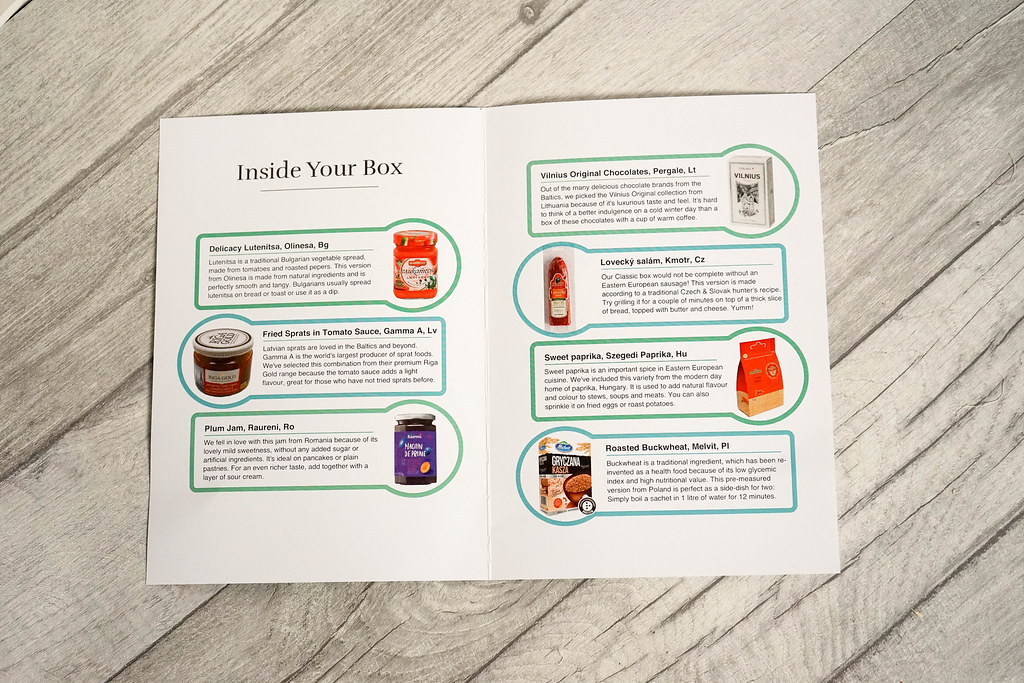 But let’s get to the products. What’s inside the December box? 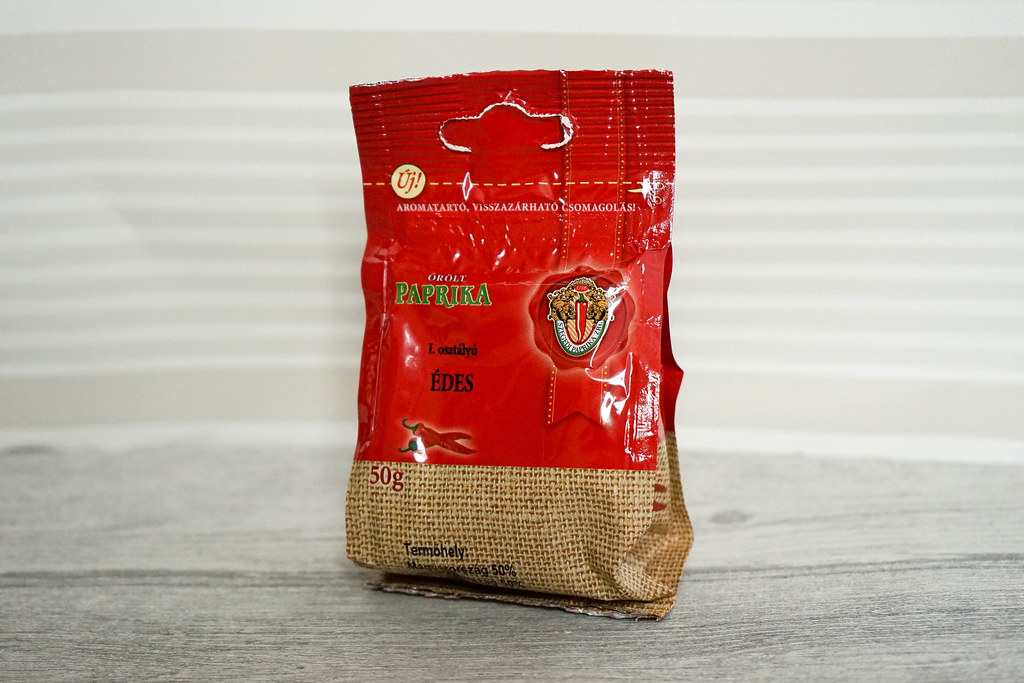 You have probably heard about paprika before and think it is some sort of chilli or spicy condiment, right? Paprika is actually made from sweet capsicum peppers and it is traditional to Hungary, who is the leading producer in the world. The peppers are grown in the South of the country, where there is more sunshine, and are harvested in September, when they are ripe. They are then added on strings and let to air dry. If you visit Hungary you will see a lot of houses and markets with strings of peppers displayed on their walls. The paprika powder is made by grinding the red paprika pods of the dried capsicum. Depending on the type of pepper, the colour of the powder will vary from bright red to orange (which is the spiciest).

The version that arrived in the Zacuska box is the Noble sweet one, bright red and slightly pungent. It is used as a spice in stews, goulash, soups and sausage mixtures. 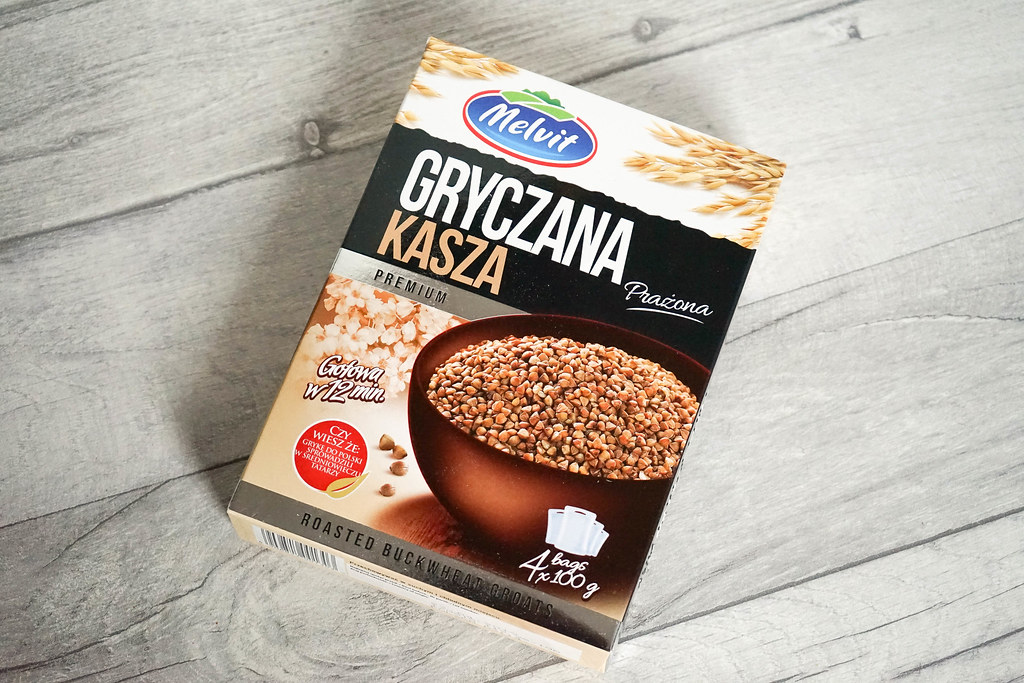 I had no idea what buckwheat was, and I didn’t know that it was a popular side dish in Poland. After doing a bit of research I discovered that actually most of the buckwheat is produced in Poland and Russia and it is very high in nutrients and antioxidants, which makes it very healthy.

I gave it a go and I did like the taste of it, slightly smoky. The Kasza Gryczana from the Zacuska box was so easy to make as it is already portioned and separated in individual bags that all I had to do to cook was boil for 10 minutes and add a bit of salt.

You can have the roasted buckwheat on its own or you can mix it with different vegetables, to add more flavours. I used it instead of rice. 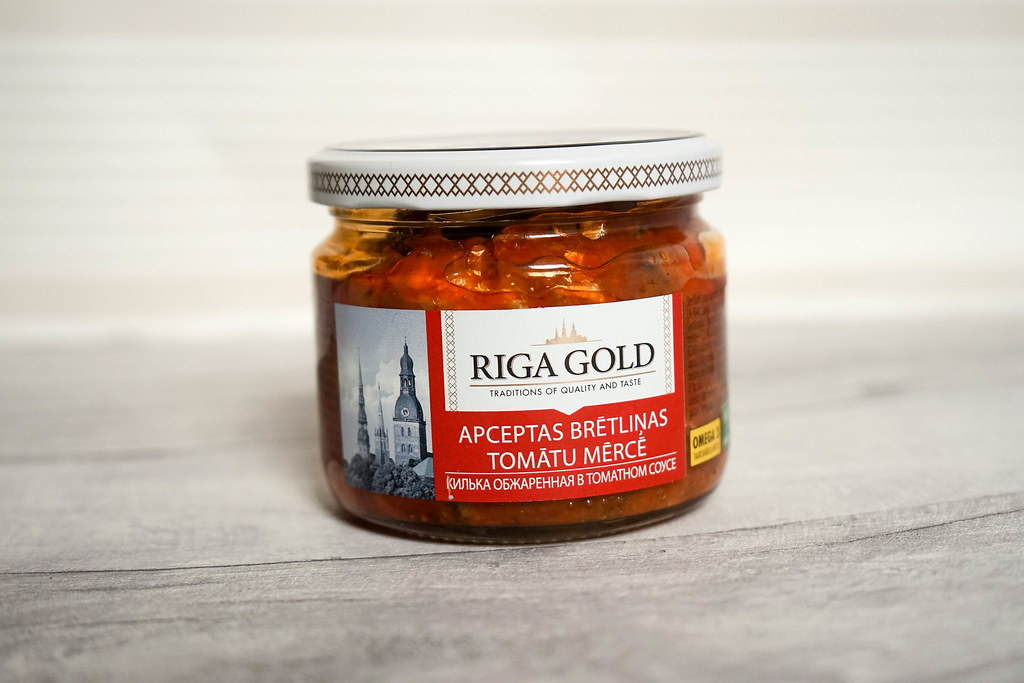 The taste of the fried sprouts reminded me of a similar product that I have tried before, in my home country. It was probably imported from one of the Baltic countries, but I did taste it before. The sprats are tiny fish from the herring family, which live in the sea.

This dish is slightly sweet, which makes it best eaten on a slice of bread, or as an appetiser. It could also be a great beer snack as it does go very well with the bitter taste of the drink. 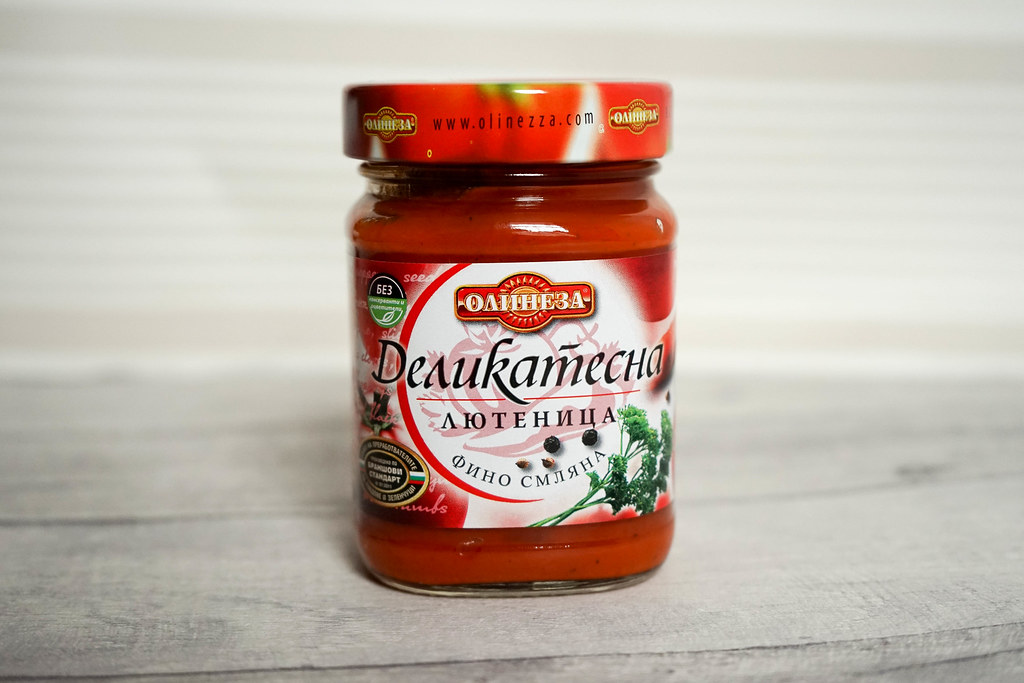 I haven’t opened this jar yet so I can’t tell you how it tastes like, but from the outside it looks like a red tomato paste. Lutenitsa is a spicy vegetable spread popular in Serbia, Bulgaria and Macedonia and made from tomatoes, peppers, onions, eggplant, and carrots. Depending on the country where is coming from, the lutenitsa can be spicy or less spicy.

This version of the Bulgarian lutenitsa is not as spicy as the one in the neighbour countries and it is very smooth, being used a spread or eaten with different meats. In Bulgaria every family has at least one jar of lutenitsa in their pantry cupboard and use it very often.

Lovecky Salam – From The Czech Republic 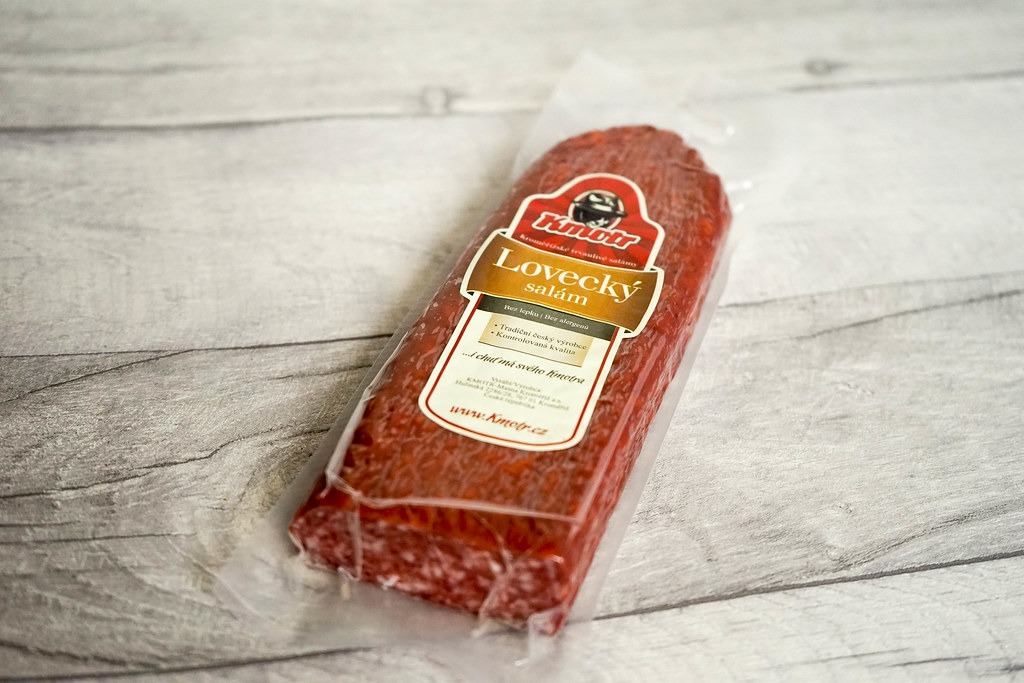 I was so happy to find this type of salami in the Zacuska box because it is one of my favourites. I have grown up with it and I think that every Eastern European country has its own version of it, with a different name but the same basic recipe. It is usually made from pork and beef meat, with plenty of spices which give it the special taste.

This type of salami is quite dry because it is produced through fermentation and then pressed to gather its rectangular shape. The taste of this salami is fantastic, smoky and full of flavour. It is best eaten as a cold cut, but you can also add it on top of a grilled butter and cheese sandwich. 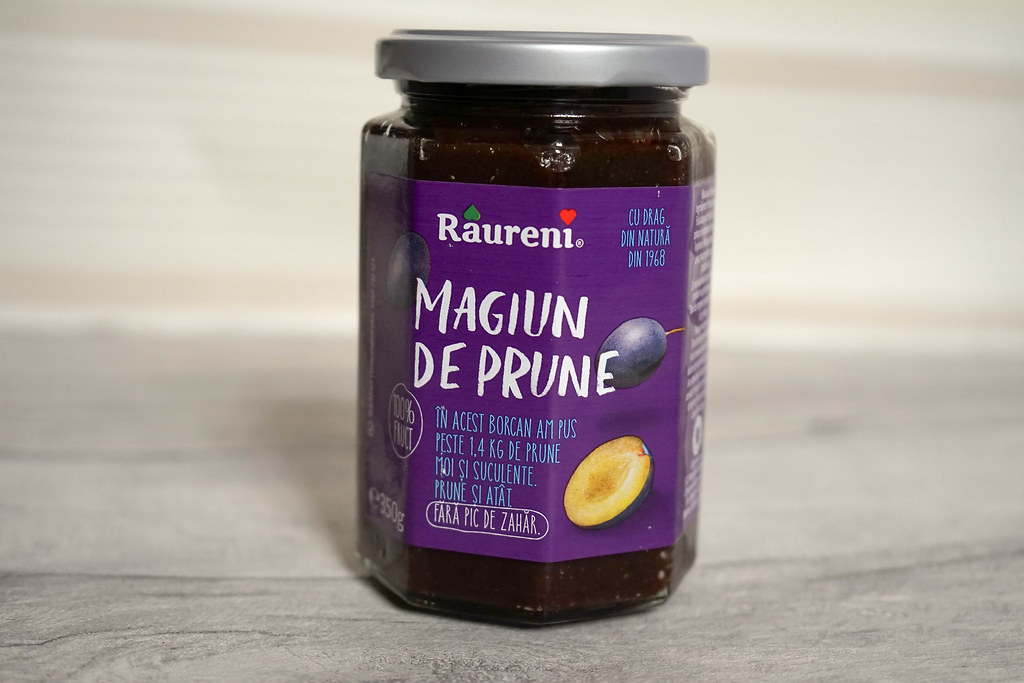 I used to actually buy this brand of jam when I was living in Romania, using it to fill up pancakes or simply as a spread on my breakfast toast.

In Romania jam is a very important part of the cuisine. Every summer and every autumn mothers and grandmothers gather in kitchens and spend a very hot weekend making strawberry and plum jam. I was often involved in this tradition as a kid, helping to cut the plumbs or cleaning the strawberries. Every Romanian household has at any time of the year at least 5 or 6 home made jars of jam.

The Magiun de Prune is a very light spread, with a natural sweetness, because of the no added sugar. Also, it is made with only natural ingredients, which means about 95% of what’s in the jar are prunes. 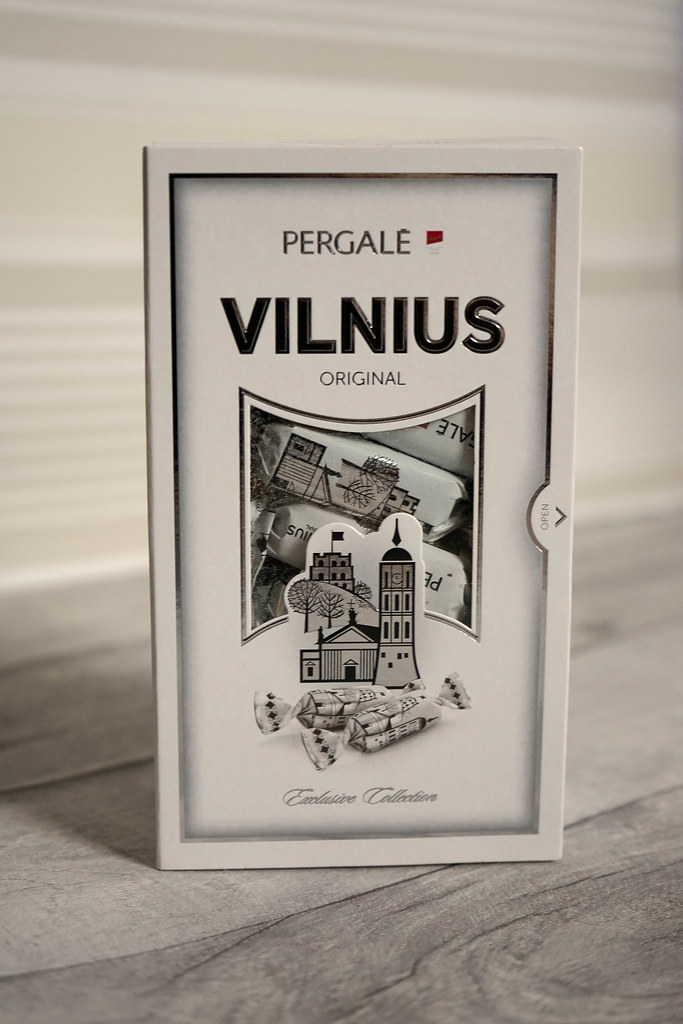 I have never tried these chocolates before and I have to admit that I fell in love with their taste. At first, I thought they would just be pieces of chocolates inside but oh no, what a surprise did I had when I opened the first individually wrapped piece! They are not just pieces of chocolates, they are proper chocolate candies filled with a chocolatey moose. I do taste a little bit of rum essence in the moose, which makes it even more delicious.

I did finish this box of chocolates quite quickly and I am so glad that the Zacuska team added a full box and not just a sample. This is actually what I love about this subscription box, all the products inside are full sized and they are all so diverse, each from a separate country.

I am looking forward to what goodies next month’s box is going to bring!