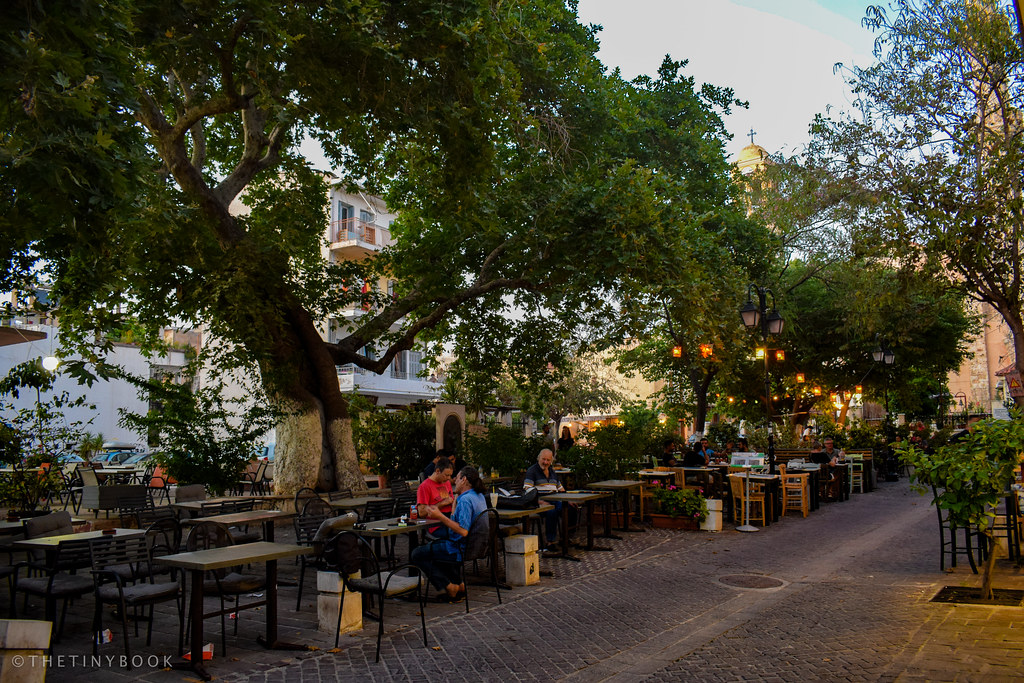 The city of Chania is a wonderful town on the Greek island of Crete, located on the North coast of the island, facing the Sea of Crete, in the heart of the Mediterranean.

The city, which is the second in population on the island, is famous for its romantic Old Town, the ancient Venetian Port, the Egyptian lighthouse, and the magnificent aristocratic buildings, the churches and the mosques dating from the years of the Ottoman ruleover Crete. There are so many things to do in Chania!

As a matter of fact, Chania is one of the most colorful and varied cities in Greece, with a character that has been influenced through the centuries by the different cultures that have dominated the area.

How to Get to Chania, Crete 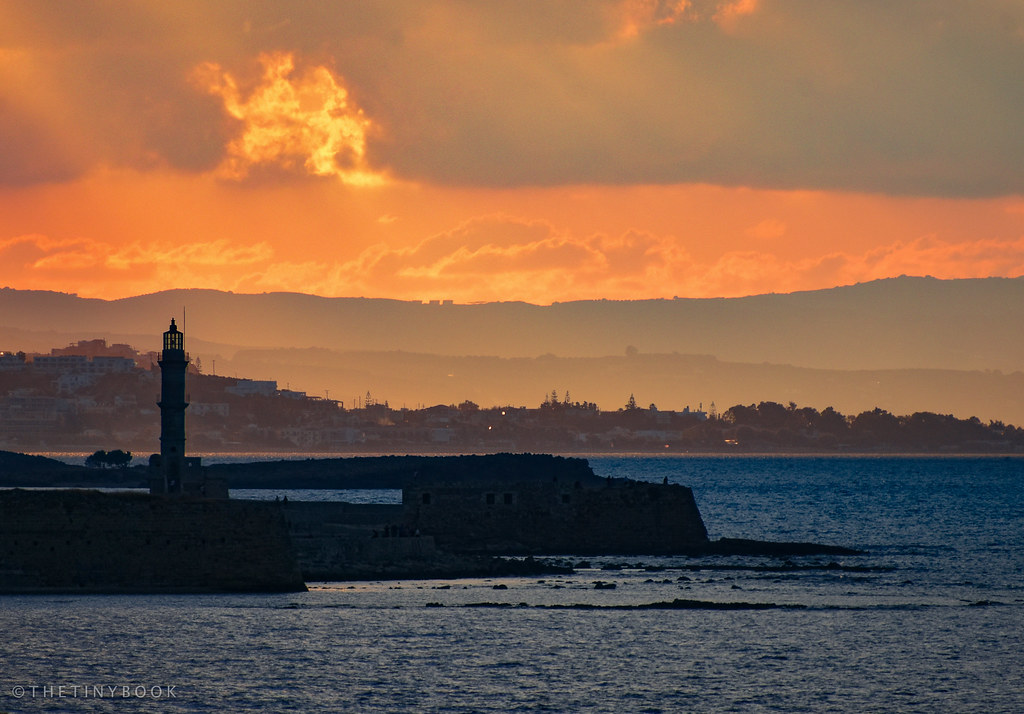 There are two ways to get to Chania from mainland Greece, either by ferry, departing at night from the port of Piraeus, and arriving at Chania on the next morning; or with a 45-minute flight from Athens’ International Airport.

Those arriving to Heraklion, the capital of Crete can take a bus and reach Chania after a 3-hour ride.

Yet, the best way to travel around on the island still remains driving on your own. Renting a car with a local company is the best way to go since they usually have quite convenient fees. There’s only one National Road on Crete and it connects the four major towns on the island, Chania included.

Where to Park in Chania, Crete

If you’ve made it to the city by car from Heraklion, you’ll be happy to read that there are a few free parking spots available.

The biggest one of them is located at the eastern doors of the old town, or Porta Sabbionara. Once you’ve parked your car there, you can walk though the remains of the entrance and make it all the way to the Arsenal, the old Venetian dockyards.

Following the coastal pedestrian road, you’ll be in the center of the old city in less than 1 minutes. This is the GPS location for that parking spot.

Another good parking area close to the city center is at the opposite end of the old town, close to the West entrance to the city, this time, the parking place is located right by the sea, in Talos Square. This is the GPS location for it.

What to Do in Chania, Crete

There are plenty of things to do in Chania, both in the modern area as well as in the old town. Since it’s the most picturesque and interesting place to discover, let’s focus on the best things you can do in Chania’s old town.

Discover the Alleys of the Venetian Quarter 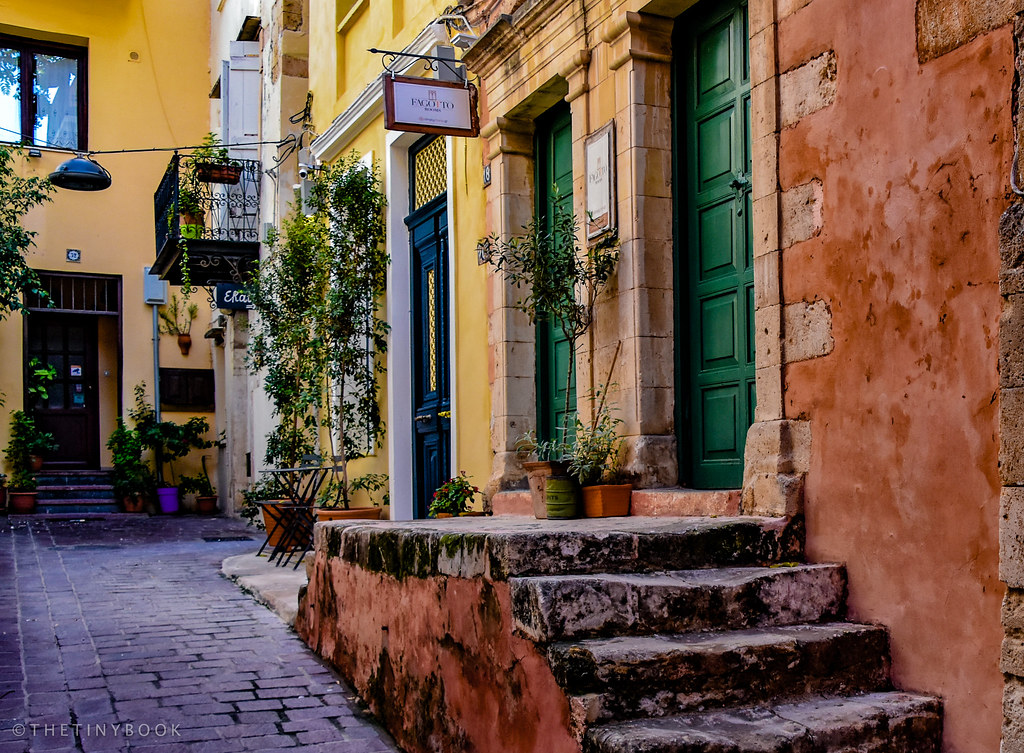 The most aristocratic part of the old town is located right behind the Venetian port, the area is known as the Venetian or the Christian quarter as this is the place where former rich Venetian rulers would build their elegant houses.

The Venetians conquered the island in 1212 giving life to what was know as the Kingdom of Candia (Candia was the name that the island had during that time). The whole of Crete was a colony of Venice and Chania was very important center in the Mediterranean for Venetian merchants, so much so that the city was usually known as the Venice of the East.

There are several unique Venetian palazzi which have been restored and transformed into spectacular boutique hotels, some of them have magnificent terraces open to the public in the late afternoon where you can sit and enjoy a drink and the wonderful view of the port at sunset.

Pay a Visit to the Gialisi Tzami Mosque 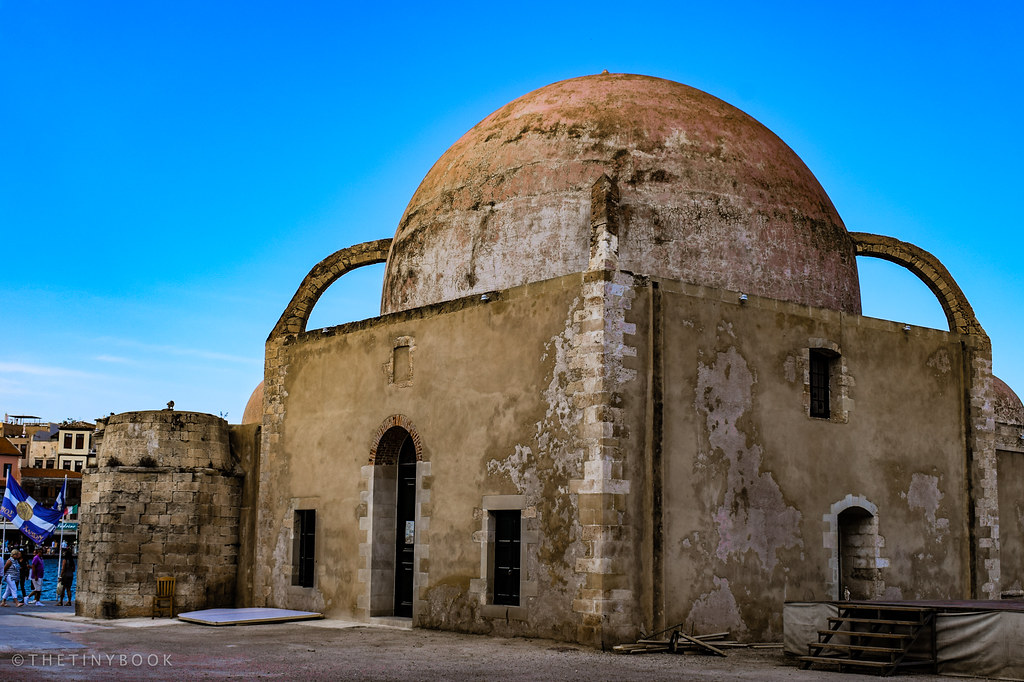 Küçük Hasan Pasha Mosque or Gialisi Tzami (which can roughly translate as the mosque by the sea) has become a traditional landmark in town and one of the most visited places in Chania.

The mosque stands on top of a former Christian church and has several characteristic pink domes. The former church was transformed into a mosque by the Ottomans who conquered Chania around 1645, and who ruled over the whole island until 1898.

On the sea side of the mosque, there’s now and information center for tourists where you can get maps and brochures of the city.

In the main hall, instead, the municipality usually hosts art and crafts exhibitions, and often the entrance is free. Once inside, pay attention to the beautiful domes, the mihrab, and the bronze chandeliers on the ceiling. 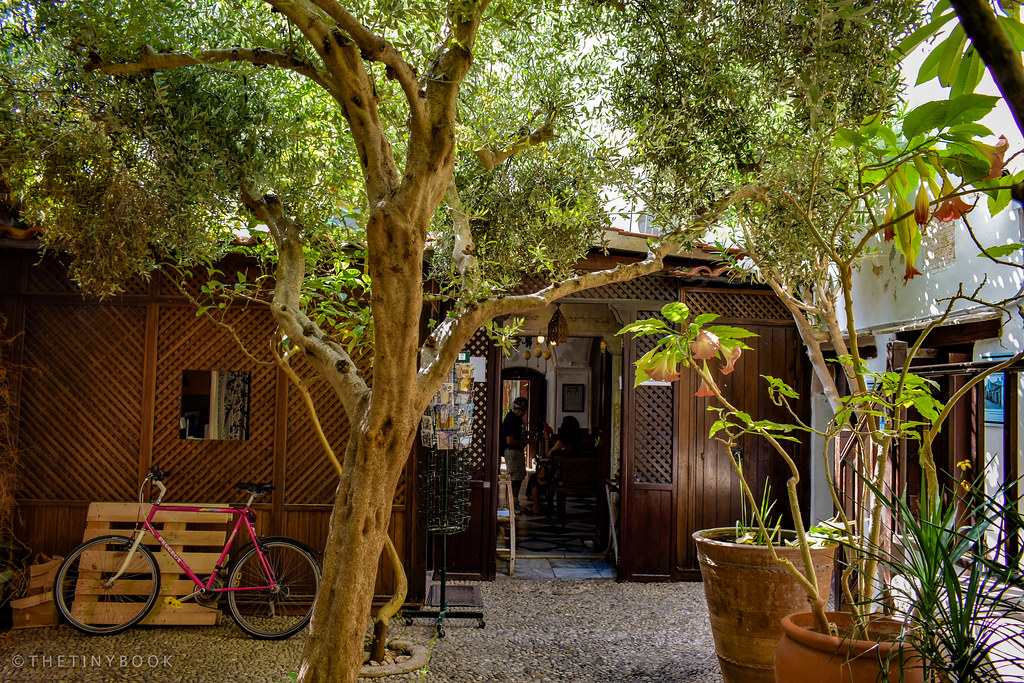 Not far from the area, on this specific point, you’ll be able to discover a lesser-known part of Chania’s past, taking a look at the last remaining synagogue and Jewish monument on the island. Etz Hayyim, or Tree of Life, is located in the heart of what once was the Jewish quarter of Chania. The building dates back from the 15th century and hosts one of the oldest mikveh (ritual Jewish bath) in the Mediterranean.

Paying a visit to the old synagogue is a great way to learn about the former Jewish community that once lived and strived in Chania, and which was sadly wiped out during the Nazi occupation of the island, back in the early forties. 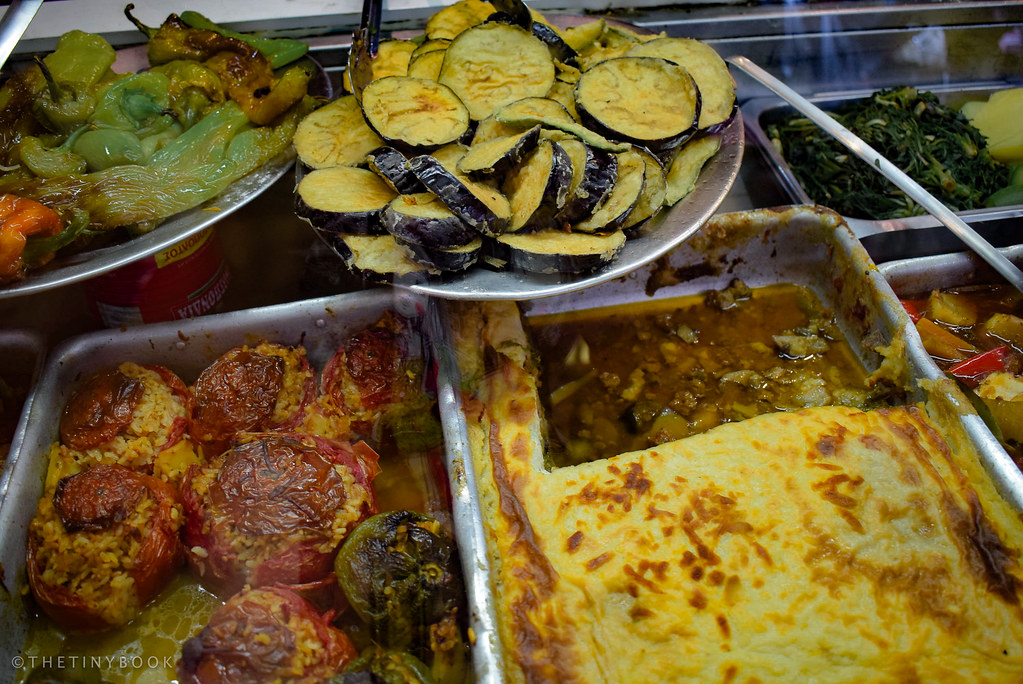 An enjoyable thing to do in Chania is to enter the Public Market, locally known as Agora, to explore the unique tastes of the island.

You can choose one of the many small food joints and enjoy authentic Greek dishes, such as the traditional pastitsio and moussaka, or go for more local flavors, such as pasta with octopus, or local pies made with wild greens and goat cheese.

The traditional local dish in Chania is boureki, a veggie pie made with courgette, potatoes, cheese, fresh mint and lots of local olive oil. It’s a perfect dish usually served cold during the hot summer days of Crete.

After your lunch, don’t refuse a shot of tsikoudia, a local spirit with a high alcoholic volume that locals usually serve together with fresh fruit such as grapes or watermelon. 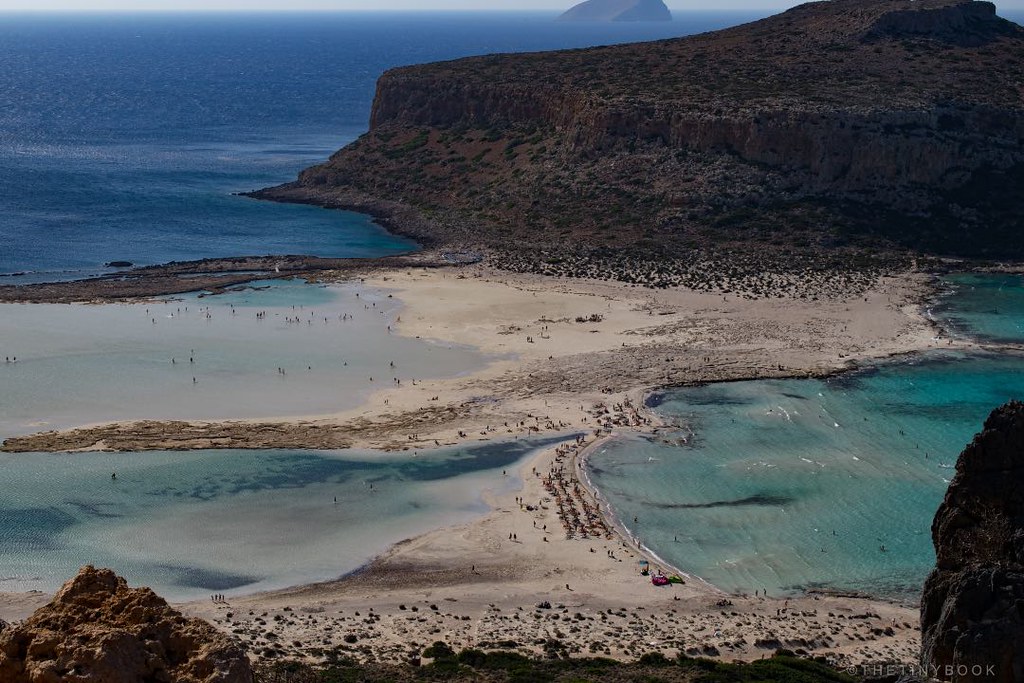 The city of Chania is the capital of the broader region of the same name. The area is worldwide known for hosting some of the most beautiful beaches in Crete.

Just about one hour west of Chania you’ll be able to reach one of the most spectacular beaches in the Mediterranean, often included among the best beaches in the world for its exotic landscape and unique turquoise waters.

The magnificent Beach of Balos can be reached by car from Chania, driving along the National Highway and then taking a small off-road track that takes you the closest you can get to the beach. Once there, you will need to leave your car and hike for about 20 minutes until you get to the actual lagoon of Balos.

If you’re a more lazy type of traveler, check the daily cruises to Balos that depart from the small port of Kissamos, about 50 minutes from Chania.

The beach has some organization, but it’s never a bad idea to pack at least some cold drinks that will be certainly a blessing when hiking down to the beach.

Where to Eat in Chania 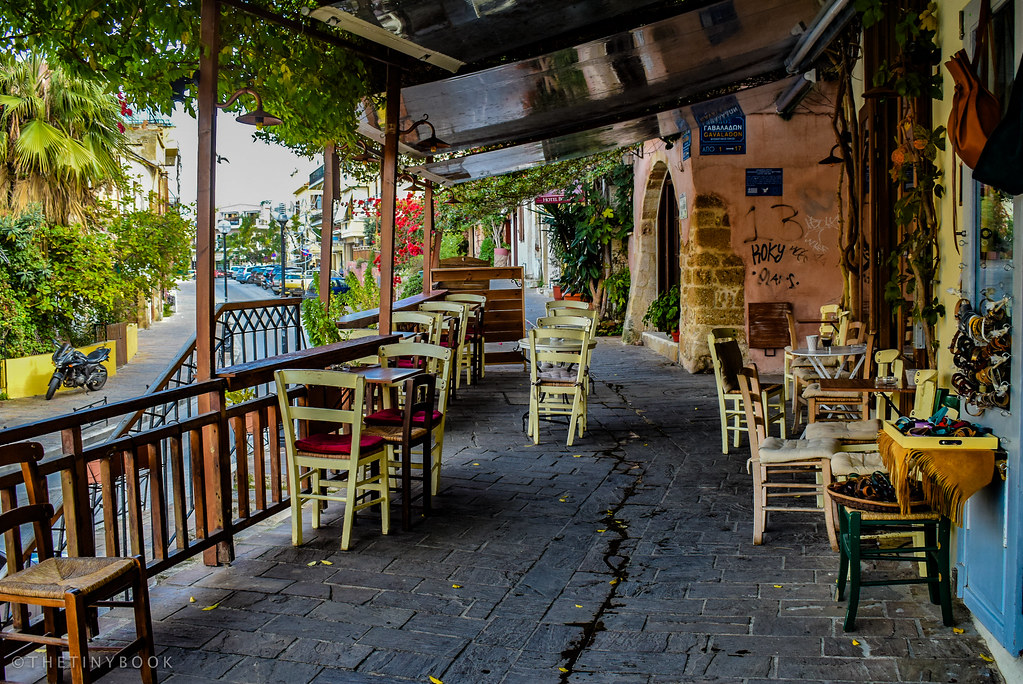 One of my favorite places to eat in Chania is in the gorgeous quarter of Splantzia, also known as the Turkish district of Chania.

You can go for an informal round of mezedes (or Greek tapas) in the unique Plateia Splantzia, at the Kafenio. The place is really informal and has very affordable prices. Sit under the shade of the plane trees and enjoy some small dishes with olives, cold cuts, barley rusks, cheese, and tzatziki and pair everything with a Cretan beer. The price for such a treat for 2 people is 7.50 euros.

If you’re really hungry, order the xtapodi krassato (octopus cooked in red wine), for less than 10 euros, one of the most delicious dishes I’ve ever tried.

If, instead, you think that’s you cannot visit Greece without trying the trademark street food of the country, just across the street from square, you’ll find O Kostas, where they grill gyro and souvlaki.

For a more a more sophisticated experience, check The Well of the Turk, just a few meters away.

The restaurant opens only for dinner, and serves dishes from the Middle Easter Cuisine, prices are about 15 euros per person without wine.

Where to Stay in Chania 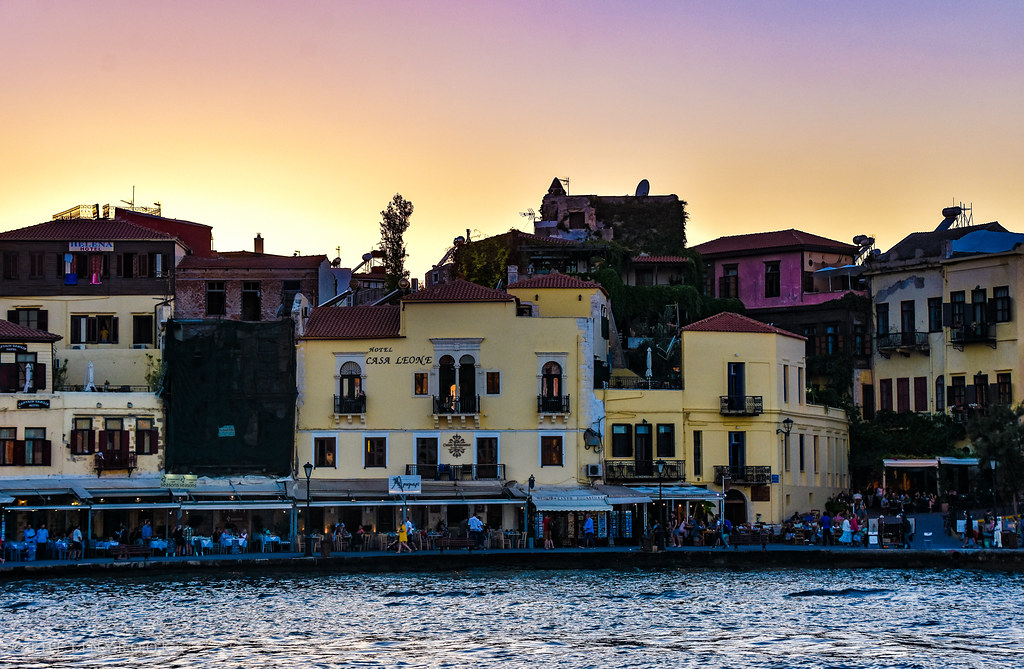 There are places to stay for any budget, you can splurge in one of the several boutique hotels in the Old Town, many of them have their own Turkish baths, spas, and fitness centers.

If you’re traveling in Crete on a budget, don’t worry… there’s also a great deal of opportunities to stay in a centrally located place without spending a fortune.

You can find great studios, apartments, rooms to rent, and even a couple of hostels in town.

Gabi is the founder of The Tiny Book, a blog about the Greek island of Crete, with useful inside tips about Crete, travel guides and itineraries to discover Crete. You can also join her Crete Travel Facebook Group, follow her on Pinterest or walk with her in a gastronomic tour of Chania Disclaimer:  Some of the links on this website are “affiliate links.” This means that if you click on the link and do a purchase, I will receive an affiliate commission at no extra cost for you. This helps me keep my website running and continue to share my traveling knowledge with you. I thank you for booking your flights or hotels using the links on my website. Regardless, I only recommend products or services I use personally and believe will add value to my readers.

25 thoughts on “Best Things to Do in Chania, Crete (Greece)”