A couple of weeks ago I joined a walking tour organised by the Korean Tourism Organisation and the Korean Culture Centre to learn about all the Korean places in London that I had no idea about. I love discovering new things about my city, and let me tell you London has so many secrets. I knew beforehand about the large Korean community in New Malden, to where I have been planning a big foodie & shopping trip, but I wasn’t aware that London had so many connections with Seoul and the Korean culture. 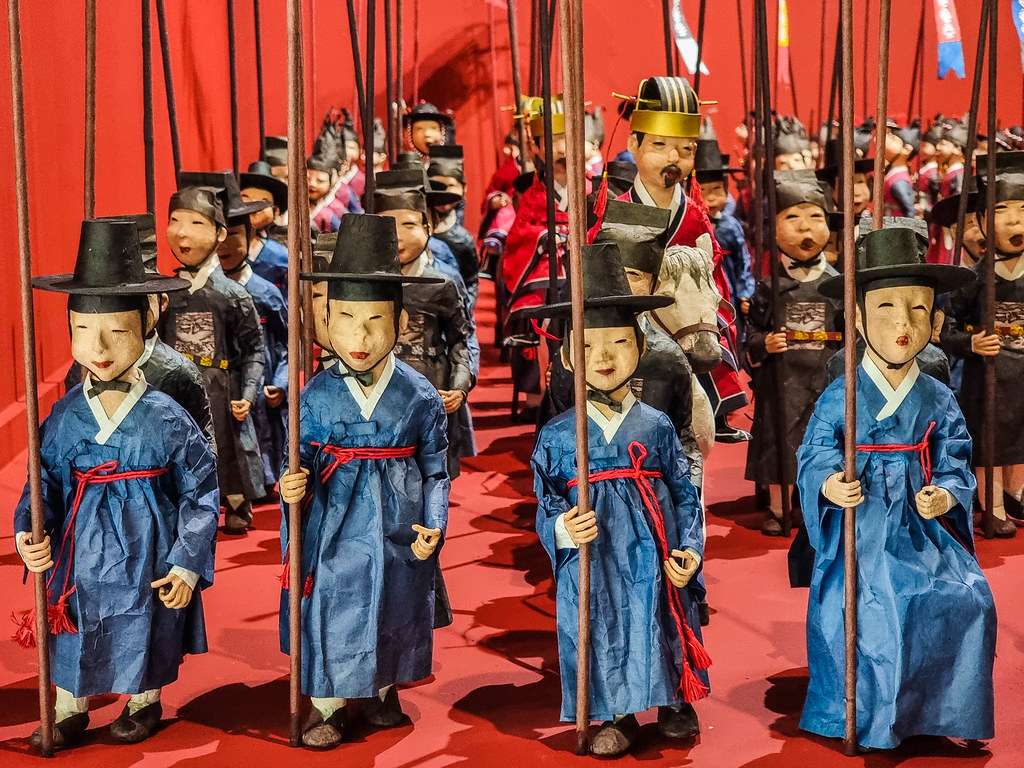 The current exhibition at the Korean Cultural Centre is about the Royal Palaces of Joseon. It’s a fascinating collection of photographs, video and artwork by famous Korean artists. The highlight of the exhibition, the re-creation of the Royal family’s wedding in 1759, is made entirely from Hanji paper, by Yang Mi-young. 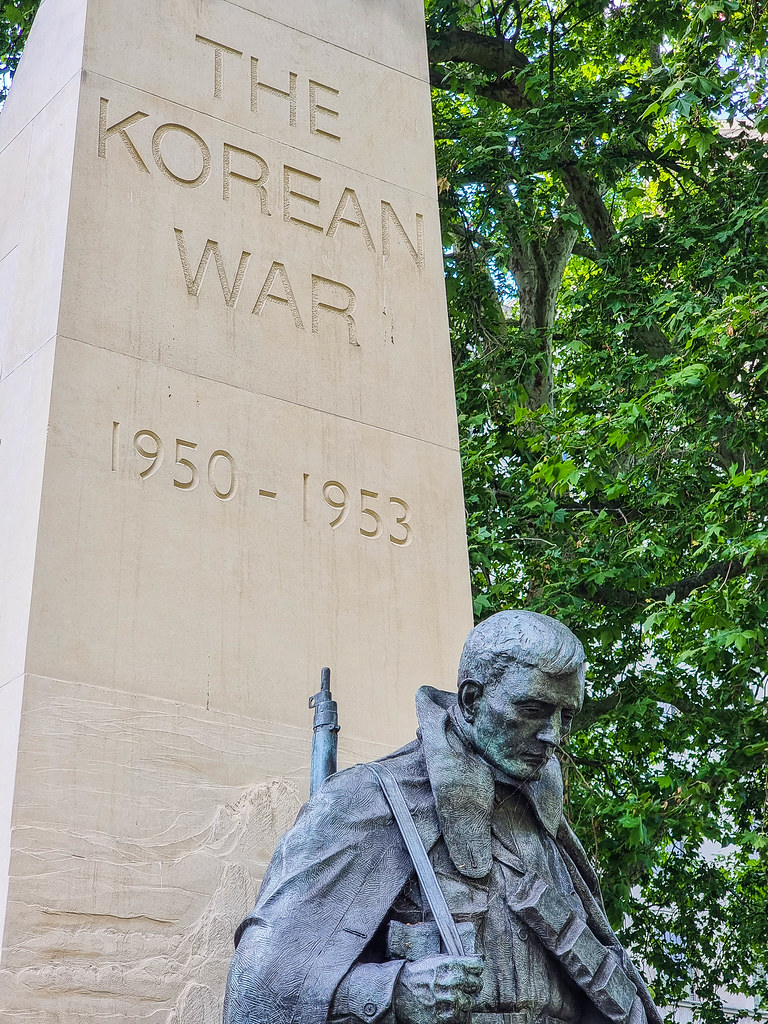 The Korean War Memorial honours the British troops who fought in the Korean War between 1950 and 1953, where more than1000 soldiers lost their lives. They are buried in the UN Memorial Cemetery outside Busan.

The memorial depicts a bronze statue of a British soldier, positioned in front of a Portland stone obelisk on a Welsh base. It was inaugurated in 2014 by the Duke of Gloucester and was gifted by Korean Government. 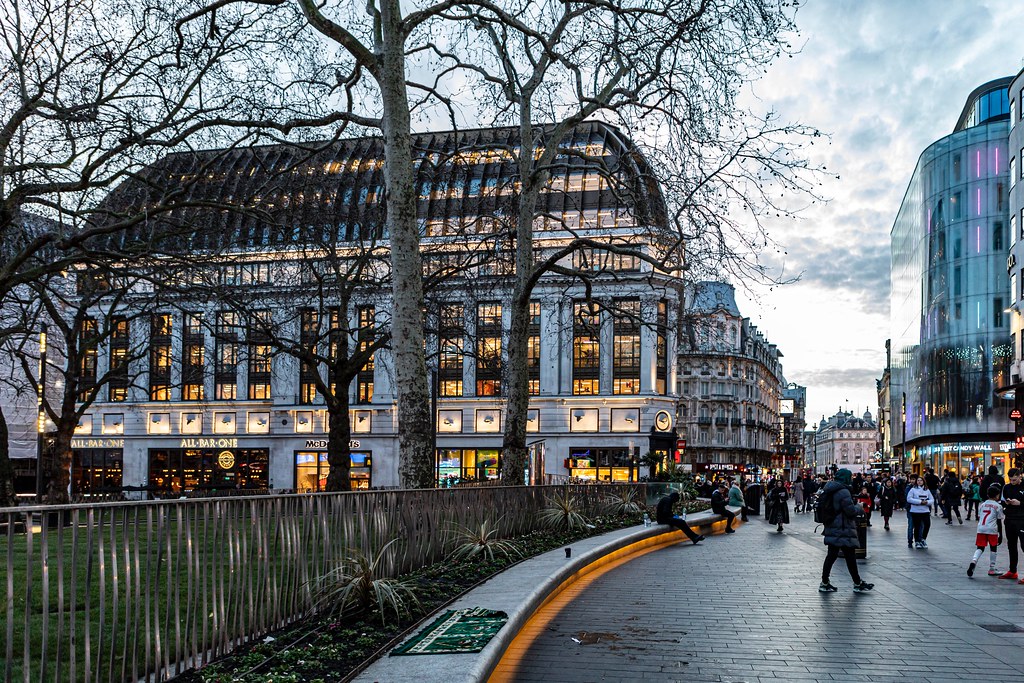 Leicester Square is the prime spot for cinema in London. There are three cinemas situated around the square, the Odeon, Vue and Cineworld, all of which have seen so many movie premieres and red-carpet events attended by famous actors. Among these are many Korean movies.

The Korean movie industry has shone over the past two years, with fantastic productions such as Parasite and Minari.  Both have been played at the cinemas in Leicester Square. 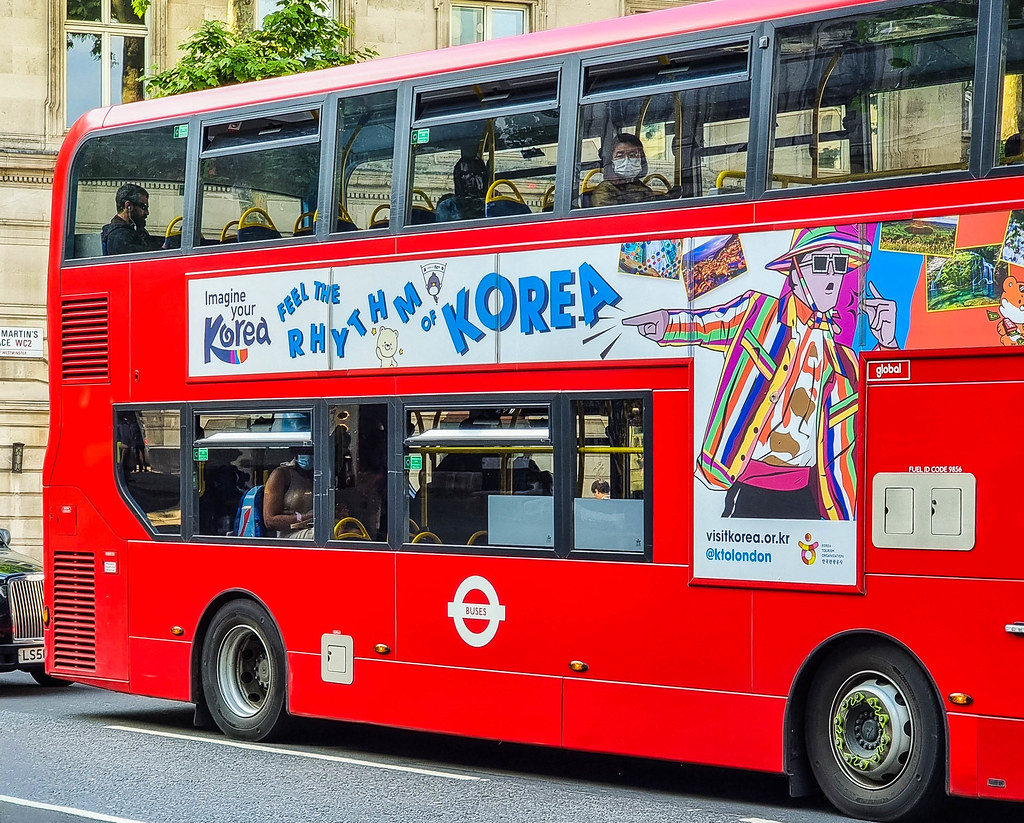 What connects Tottenham Court Road and Korea, you might wonder? Son Heung-min, the new hero of the Korean community in England is a professional footballer, captain of the South Korean team, and a forward for the Premiere League Club, Tottenham Hotspur.

Son has created history as the first Asian player in the history of football to score more than 50 goals in the Premiere League. He was nominated for the Ballon d’Or in 2019 and is considered an icon in Korea. 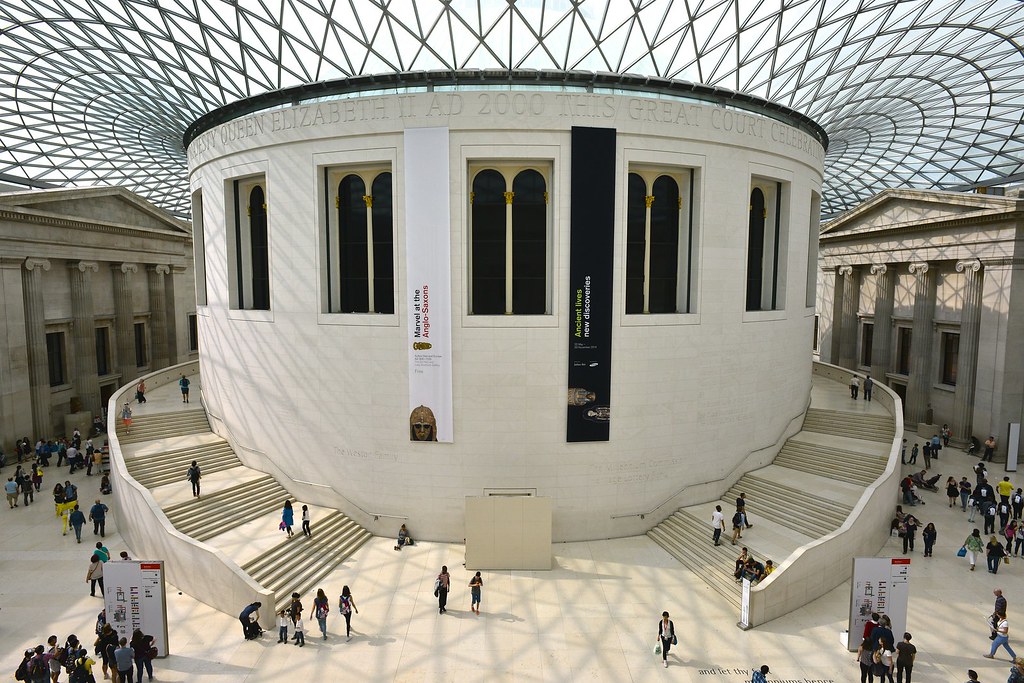 The British Museum was inaugurated in 2000 as a permanent exhibition dedicated to the history, art and culture of Korea. The collection includes objects dating from around 300AD, and also features a beautiful reconstruction of a saranbang built by a Korean master craftsman. A saranbang is a room in a traditional Korean hanok (house) used by the men of the family for studying, writing poetry, or inviting visitors for tea. 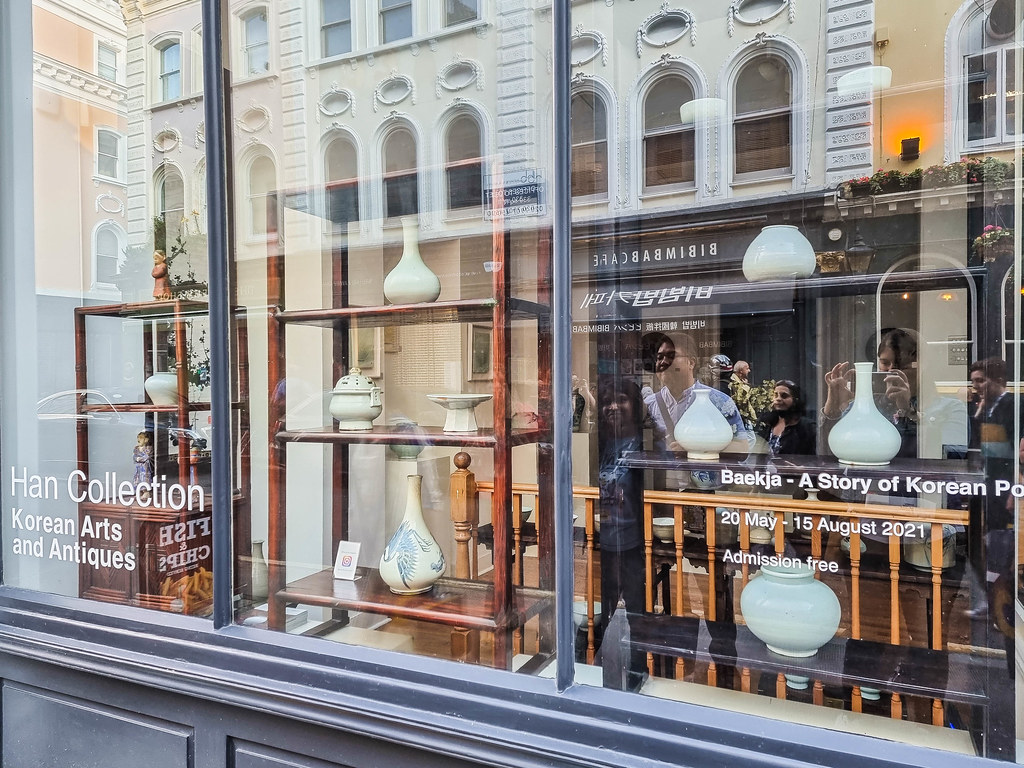 Just outside the British Museum you will find the Han Collection, a gallery and antique dealer specialising in Korean art. They organise regular exhibitions of ceramics and porcelain items, and are free to visit.

Oseyo is a fantastic Korean supermarket located in the heart of Soho, near Leicester Square. It has a large range of products, from food and drinks to K-pop merchandise. It is my place to go every time I crave treats such as bulgogi marinade, kimchi, chili oil, Choco Pie or mochi. It might be a small shop, but they have pretty much everything you need to make some amazing Korean dishes. And, let me tell you a secret, it’s not expensive at all.

Nature Republic is a Korean skincare shop just across the street from Oseyo. They sell a large range of sheet masks made with natural ingredients and an assortment of moisturising creams. They also have a small make-up section, where you can find mascara and lipsticks. 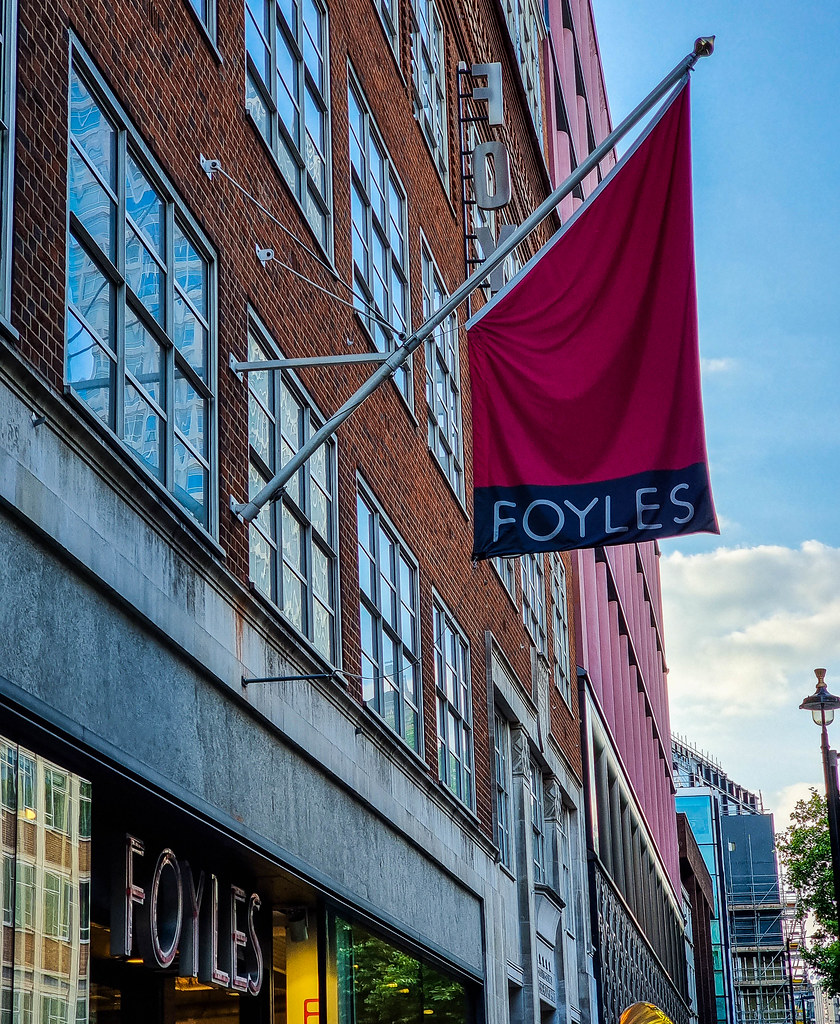 Foyles is one of the most famous English bookstores, and it was even in the Guinness Book of Records for a 30 mile long shelf, and for the number of titles on display. Their flagship store is in Charing Cross, a stone’s throw away from most of the other Korean shops mentioned in this article.

If you want to learn more about the Korean culture, the language, or just to buy a Korean fiction book, this is the place to go. Here you will find a large section on Korean themes titles.

Wing Wing is a newly opened Korean restaurant that focuses on Chimaek – the pairing of fried chicken and beer. Besides the delicious fried chicken wings and drumsticks, they also serve a variety of katsu dishes, crispy battered seafood and chicken burgers. I highly recommend the signature wings with soy sauce and garlic, alongside a side of kimchi slaw and seaweed fries. And of course, a pint of draught beer. 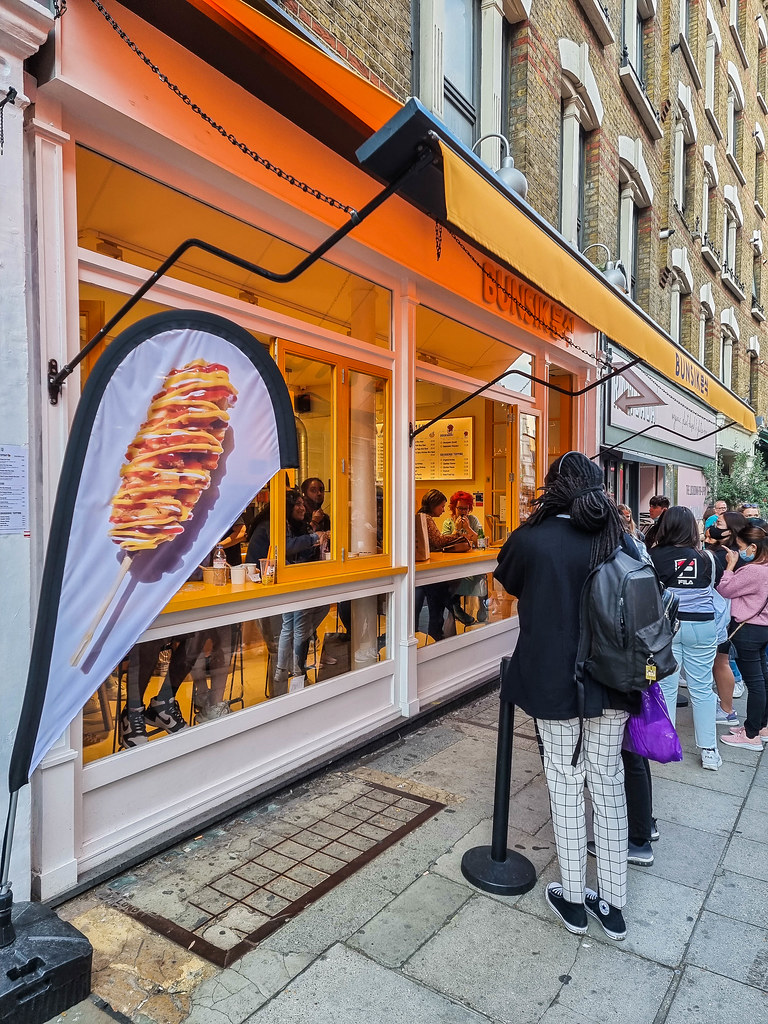 Another newly opened Korean takeaway in Charing Cross, is Bunsik.  They sell delicious Korean street food staples such as corndogs, cupbap (rice bowls topped with bulgogi, spicy pork or chicken teriyaki), and Ddukbokki (Korean rice cakes). There is always a queue in front of Bunsik, which says a lot about how delicious their Korean food is. 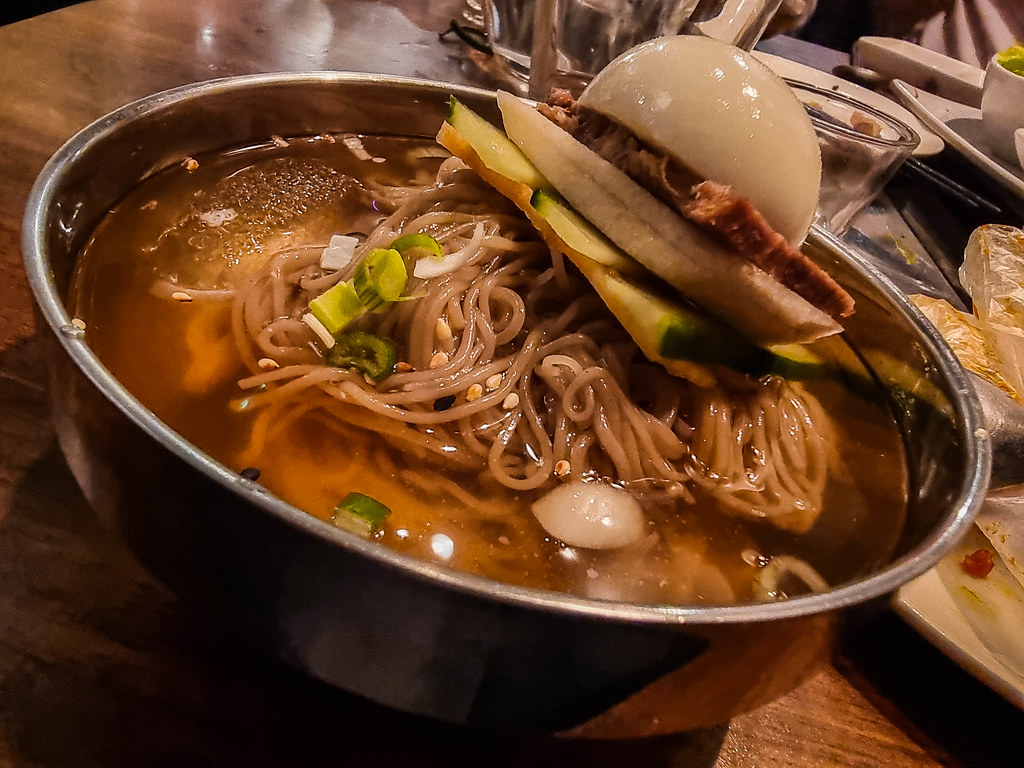 This small restaurant just off Tottenham Court Road tube station, serves authentic Korean food including Korean barbecue cooked at the table. I had a feast at Han Kang, sampling some of their most popular dishes on the menu: kimchi assortment, Mul Naengmyeon (Korean cold soup), Buchimgae (Korean pancake), Japchae (the most famous Korean noodles), the famous barbecue and the delicious sweet and spicy chicken wings.

13 thoughts on “Discover Korea in London: Where to Find Korean Places in London”