Mdina is without a doubt one of the must see places in Malta. Known also as the Silent City of Malta, Mdina was formerly the island’s capital, from antiquity until the medieval period. Due to its privileged location on the highest point of the island, it was easy to protect from enemies approaching from the sea. There are plenty of things to do in Mdina, and it will easily fill at least half a day of your Malta itinerary.

The best time to experience the silence Malta’s Silent City is in the evening, at sunset, after most of the tourists have already left.

How to Get to Mdina from Valetta

Getting to Madina from Valetta is pretty straight forward, with plenty of buses connecting the two. I stayed in St Julian and the stop for the 202 bus was only a short walk from the hotel. However, I think you should know that whilst the public transport in Malta is very reliable, the experience of riding a public bus is not the most enjoyable. The buses are mostly old and crowded, and because the traffic in Malta is chaotic, it will be quite a while before you reach your destination. It can take between half an hour to an hour to reach Mdina from Valetta, and even longer if you start your journey in Sliema or St Julian, where most of the hotels are located.

I could spot Mdina from the road, a limestone town on top of a hill.  You should be aware that Mdina is a citadel inside Rabat Town and often you will find that the buses stop in Rabat, not Mdina. That’s because most of its streets are very narrow, and a very limited number of cars are allowed to enter the city.  Only about 300 people still live in Mdina, hence the name “The Silent City”.  When walking through its streets, most of the time you won’t hear a single sound.

There are quite a few attractions in Mdina that you really should visit, starting with the Mdina Gate, which is near the bus stop. 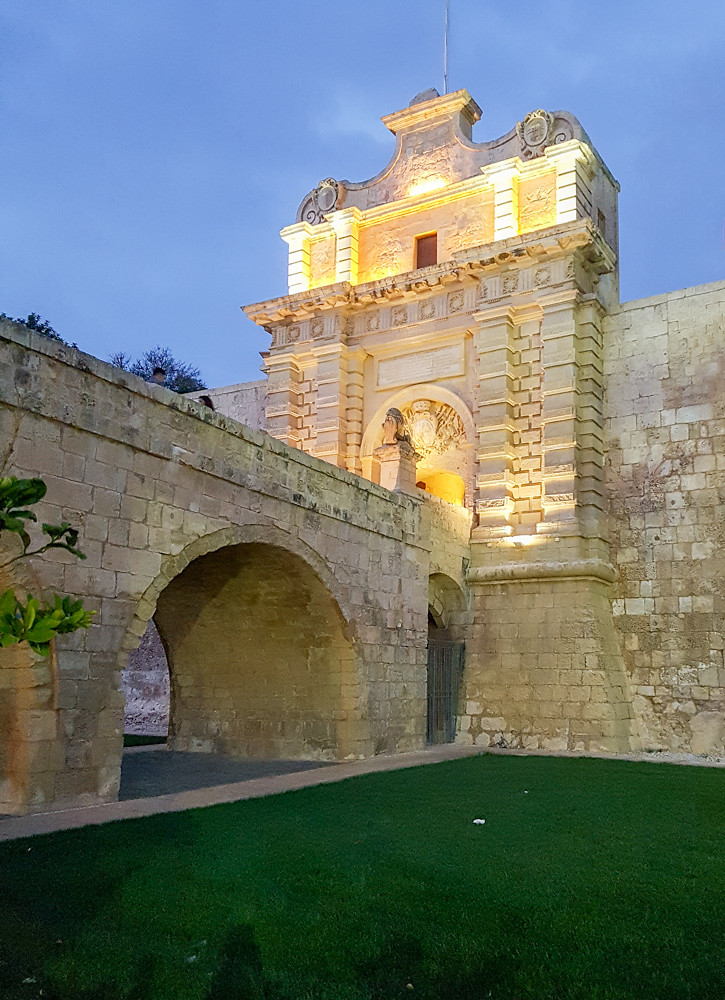 I entered the “Silent City” through Mdina Gate, passing over an arched stone bridge, decorated with statues of lions holding the Coat of Arms of Rabat. In the medieval times, the entrance to the city consisted of three gates, separated by courtyards. However, in the 17th century the city was completely rebuilt and the gates were demolished to make space for Palazzo Vilhena. That’s when the medieval fortifications were reconstructed and a new Baroque gate was built, a few meters away from the original one: Mdina Gate.

Mdina Ditch, situated below the Citadel,  is a lovely, landscaped garden to stroll around. This area used to be an orchard, with orange, lemon, and cypress trees. As Mdina is built on the highest point of the island, the views from here are stunning. At the end of the garden is a terrace from where you can see all the way to the Mediterranean Sea. 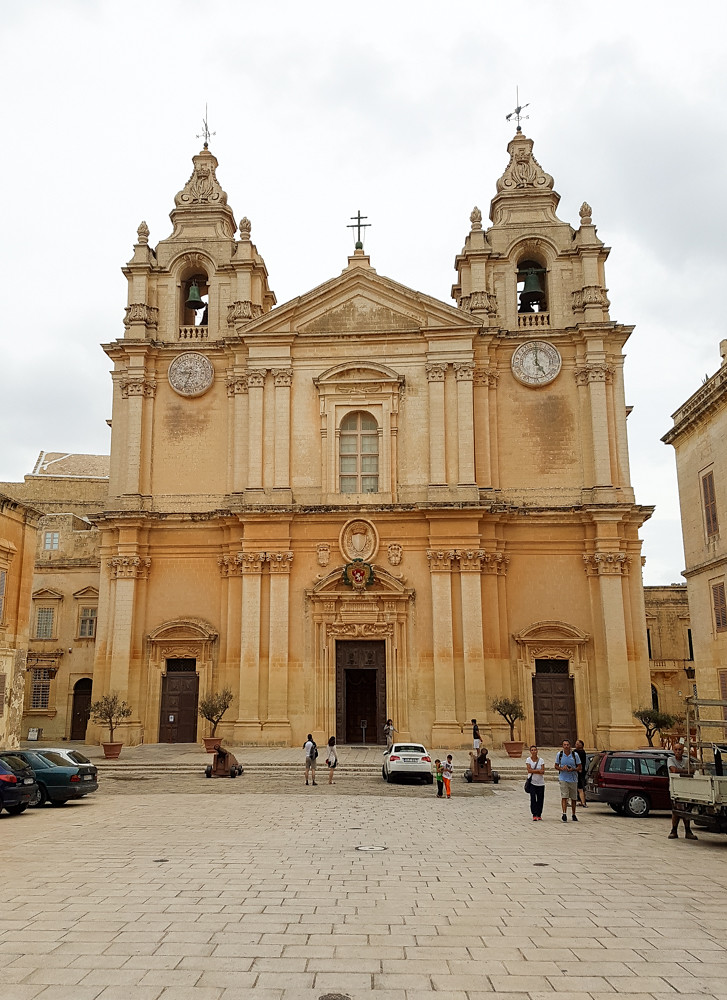 As soon as you step through the city gate and walk straight ahead for a few meters, you will be welcomed by a beautiful square, where the majestic St Paul’s cathedral is guarding it. The legend says that the cathedral was built on the same spot where the Roman governor Publius met Paul the Apostle, after his shipwreck in Malta. However, the cathedral we see today was rebuilt in the 17th century, following an earthquake which destroyed the ancient one. The new Cathedral was reconstructed in a Baroque style as well, with only a few original elements from the old cathedral (items that survived the earthquake, like the door for example). The floor of the cathedral is covered in marble tombstones, commemorating bishops and members of the noble families of Mdina who are buried there.

Palazzo Falson is a medieval townhouse in Mdina, built in the 15th century as the home for a Maltese noble family. Now a museum, the house hosts a collection of items belonging to its various owners over the years, stretched over 17 rooms. Its aim is to recreate a home-like décor, with a kitchen in which you can see earthenware pots used to cook rabbit stew, and a study in which you can see paintings belonging to famous artists such as Nicolas Poussin, Salvator Rosa or Edward Lear.

There is even a chastity belt which is believed to be as old as the Middle Ages, as well as a watch from the 14th century manufactured by Robert Robin, King Louis XVI’s favourite watch maker. Palazzo Falson is without a doubt one of the must see attractions in Mdina.

Things to Do in Mdina, the Silent City of Malta:

I highly recommend visiting Mdina in the afternoon, after the buses have picked up the tourists and the city has regained its quietness once more. I arrived in Mdina at around 4:30 pm and enjoyed a quiet town with empty narrow streets, and almost no one else in sight.

Explore the Narrow Streets and Admire the Architecture 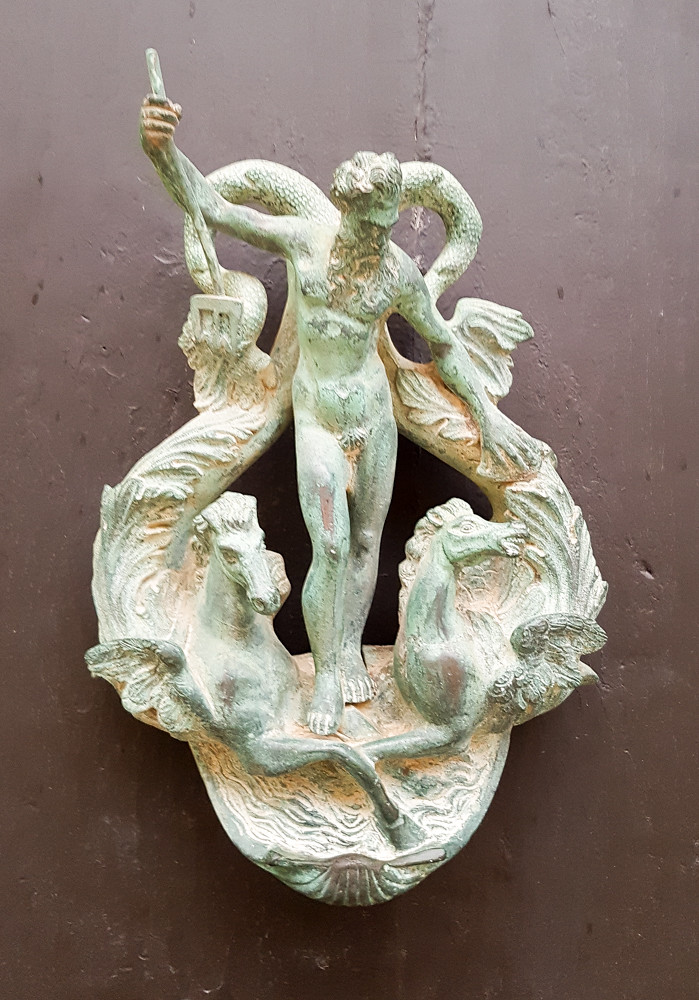 The best way to experience the silence of Malta’s Silent City is by letting yourself get lost in its cobbled streets. The beautiful limestone houses have gorgeous massive doors, decorated with the most intricate ironwork. 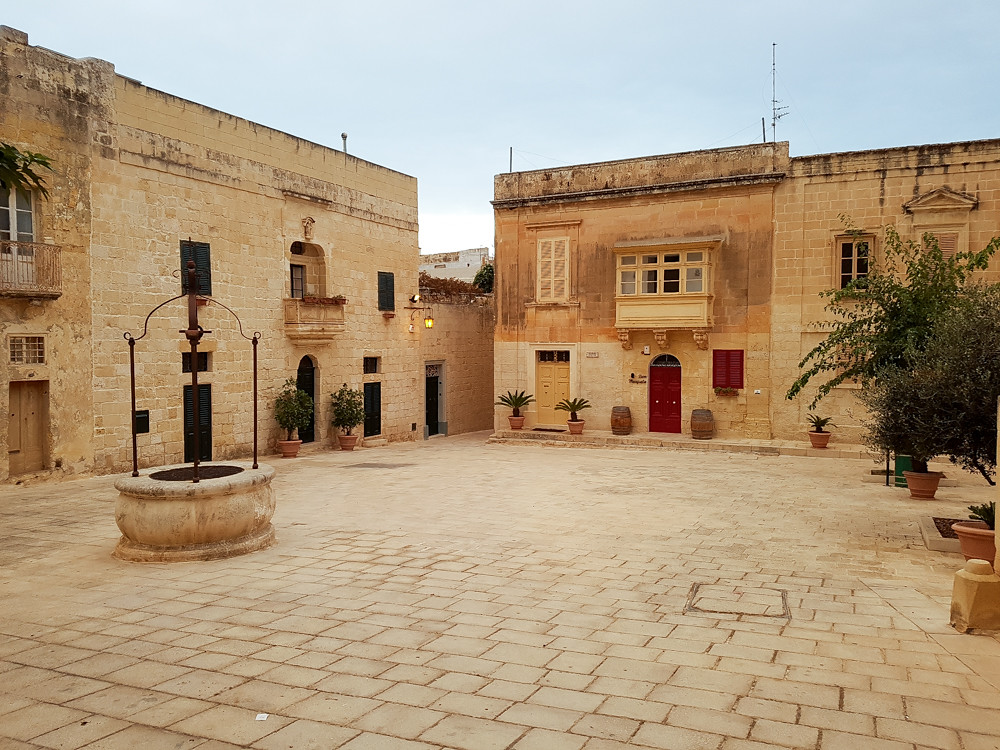 If you are a fan of Game of Thrones, then finding some of the places where scenes were filmed is one of the best things to do in Mdina.

Besides Northern Ireland, Mdina was the filming set for the first season of the famous Game of Thrones series. Most of the scenes from the King’s Landing and Pentos were filmed in Malta, in and around Mdina, and on Gozo. You will recognise the Mdina Gate in episode 3, where Catelyn and Rodrik enter King’s Landing. The Mesquita Square is the location of Littlefinger’s brothel, in front of which Ned Stark and Jaime Lannister fought in episode 5.

Have Lunch/Dinner With a View 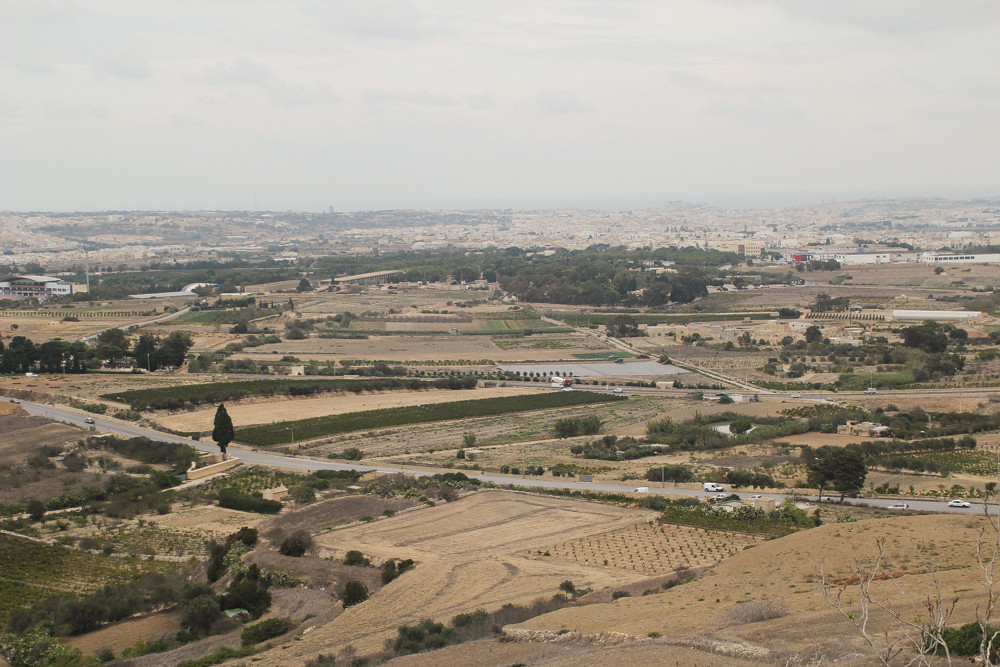 If you get hungry while visiting Mdina, you must know that there are just a restaurants inside the city walls. I would recommend stopping even for a coffee at Fontanella Garden, which has an amazing location right on the city walls. You can almost see the entire east side of the island from here. Despite the prime position of this cafe, the prices are actually very decent. They have a great selection of cakes and light bites which come in huge portions. I ordered the ftira, a traditional Maltese tuna ciabatta,and in the end I couldn’t finish it, or have any dinner that evening.

One of the best places to take in the views over the island to the Mediterranean Sea, is Bastion Triq is-Sur. It is located in the East of the town in a cute square, with buildings covered in pink Bougainvillea flowers.

Mdina Experience is a great place to visit and learn more about the history of the town in an interactive 30-minute video show. The experience highlights Mdina’s journey though time, starting 7,000 years ago when the first inhabitants sailed here, from Sicily.

A ticket to the Mdina Experience costs 6 euros for adults and 3 euros for children.

Other Things to Do in Mdina/Rabat 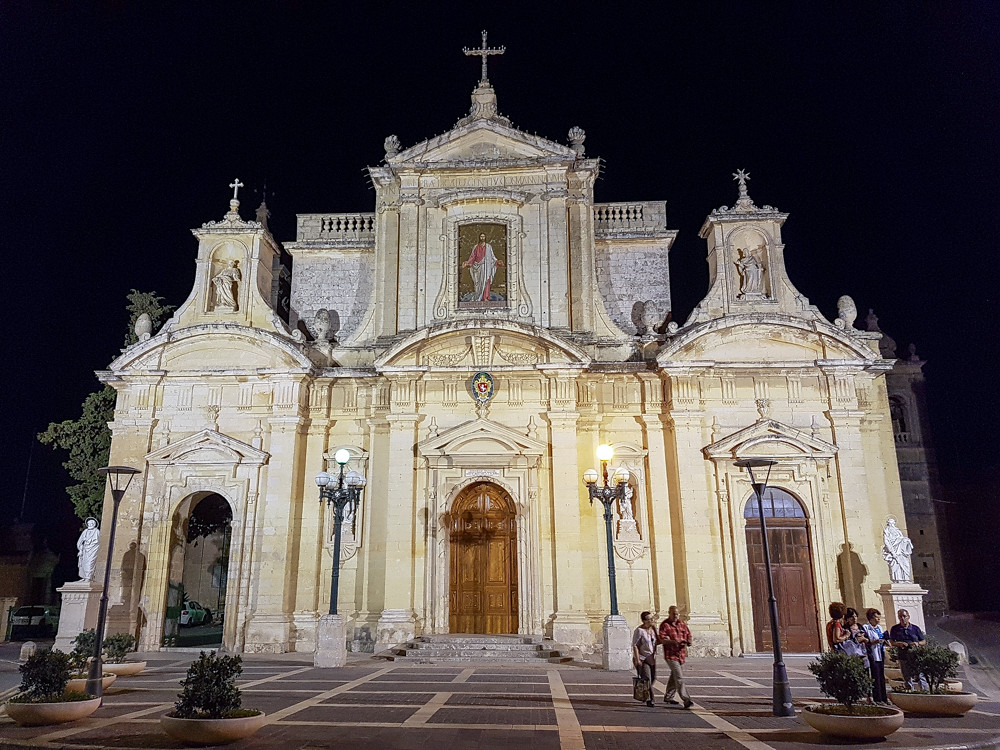 Rabat is as beautiful as Mdina, with the same narrow streets and beautiful buildings, but without the silence. In fact, the name of the city, Rabat, comes from Arabic and it used to mean “a suburb” of Mdina.  Before Mdina was rebuilt in the 17th century, there was only one city. Today, Rabat is mostly known for the catacombs of St. Paul and St. Agatha, underground cemeteries where the Romans used the bury their dead. 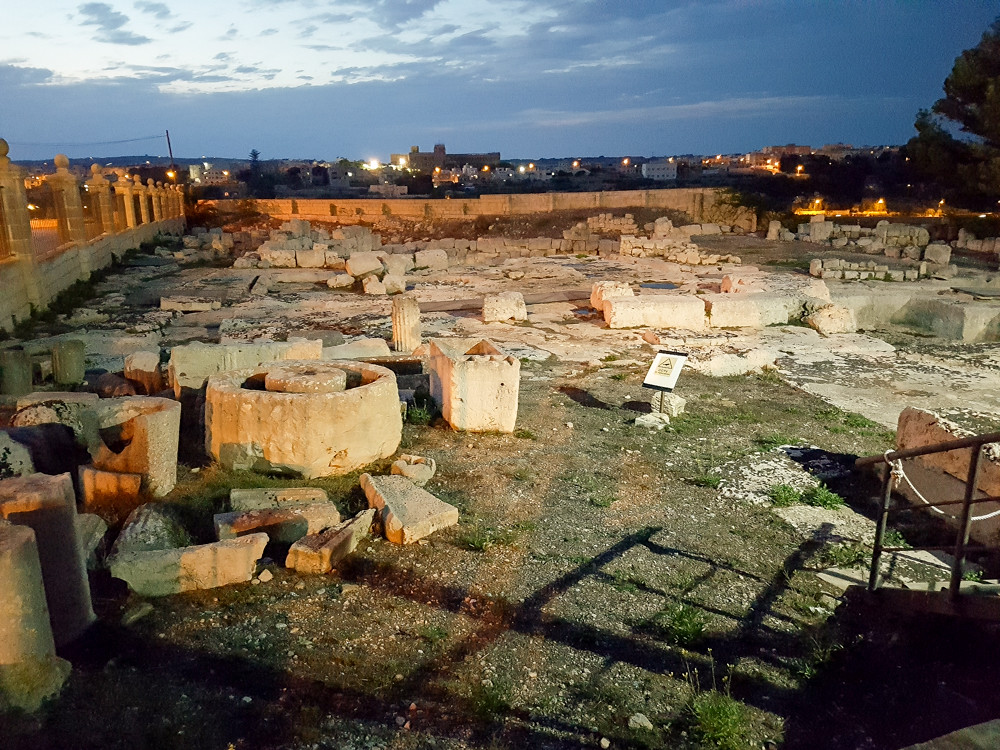 Domus Romana is a museum housing the ruins of a 1st century aristocratic Roman House, which was used until sometime during the 2nd century. The museum is fascinating to visit because in the 11th century a Muslim cemetery was established on top of the ruins. The site wasn’t actually discovered until 1881, when excavations in the area revealed mosaics, statues and tombstones.

The mosaics found here are pretty much intact and have the same style as the ones found in Pompeii and around Sicily. The house was built in an ancient Greek architectural style, with columns surrounding the interior courtyard and mythological scenes painted on the walls.

The museum was the first one in Malta to be built specifically to display the mosaics and the artefacts found during the archaeological excavations.

A ticket to the Domus Romana alone costs 6 euros, but it can be combined with the Rabat Cultural Experience which includes entry to the catacombs and the National Natural History Museum, and a tour on the Sightseeing train, for 14 euros.

Check Out the Catacombs of St. Paul and St. Agatha

The catacombs of St Paul and St Agatha are a system of underground galleries and tombs, once a large cemetery, dating from the Phoenician times. The main complex of catacombs covers an area of over 2,000 square meters and shows evidence of Christian, Jewish and Pagan burial sites next to each other. There are different decorations carved in the stone walls as well as messages written in red paint.

The catacombs were probably used until around the 8th century. A ticket to visit the catacombs costs 6 euros for adults and 3.50 euros for children.

Pastizzi is a traditional Maltese dish that you must try at least once during your trip. It’s the perfect street food, delicious and inexpensive. You will find the best pastizzi in Rabat at Crystal Palace. This hole in the wall across the street from Domus Romana is so popular with locals, that it bakes pastizzi pretty much all the time, being closed for only two hours each night. There will always be groups of locals gathered around the small tables both inside and outside, chatting over a drink and enjoying freshly bakes pastizzi.

The pastizzi come in two flavours: ricotta and mushy peas. They are flaky and so yummy that your tastes buds will thank you after eating them.

Casa Bernard is a 16th century palazzo, one of Malta’s hidden gems. The house has been fully restored by the owners and daily tours of its premises and gardens are offered to visitors. The owners of the house are passionate about its history and conduct tours, whilst still using it as their residence. Visiting Casa Bernard feels more like coming to a friend’s house rather than seeing a museum.

The entrance fee to Casa Bernard is 12 euros per person.

For more information, read this helpful guide on what you should know about Malta before you arrive.

Have you ever visited a Silent City before?