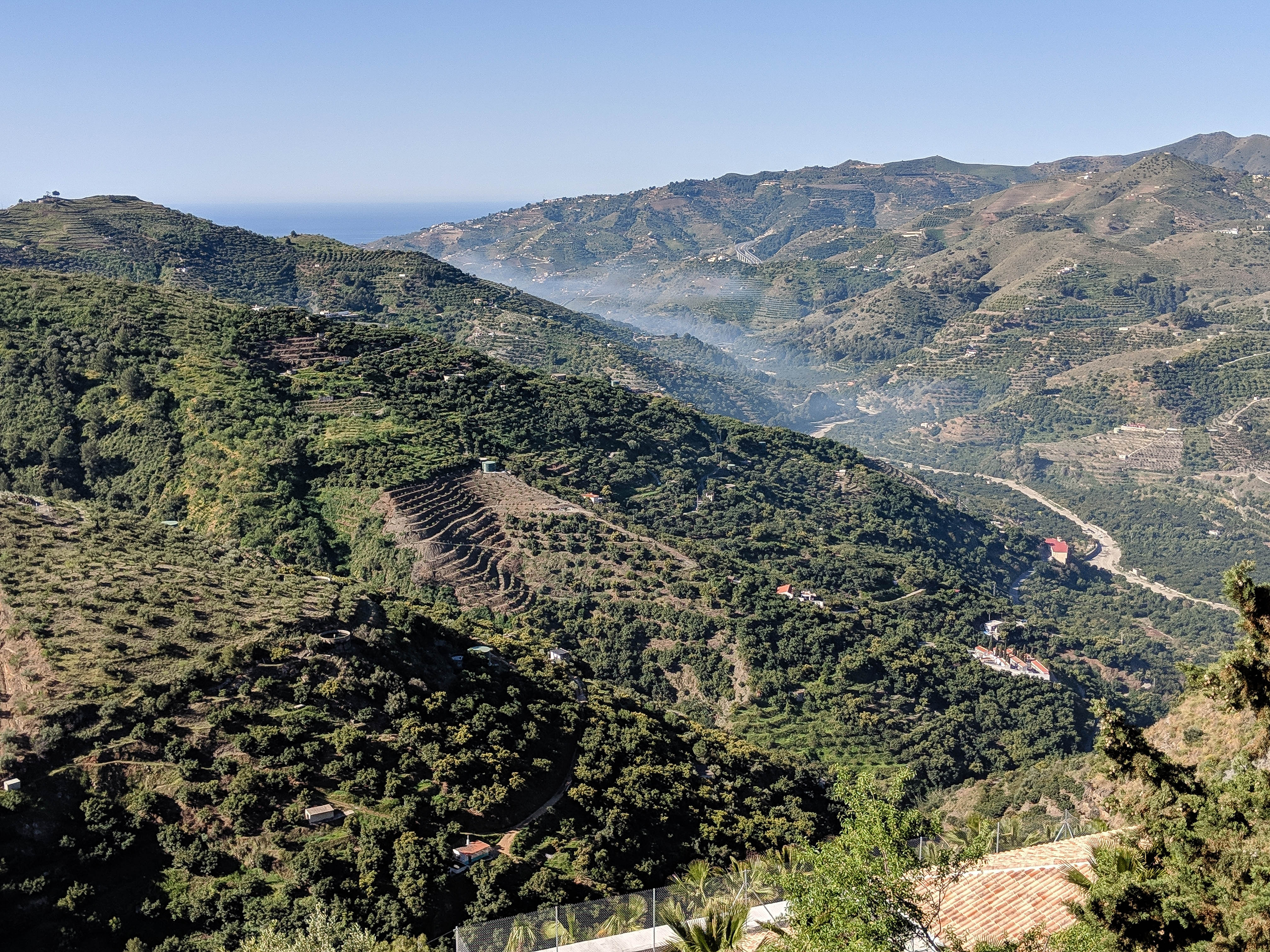 This is a land where the mountains bend over to kiss the sea. The sun is harsh over here, and the little vegetation left looks tough and scruffy. The eagles roam high over your head as you park your car to the side of the empty road. This must be the 100th viewpoint you stop by but you never tire. Under your feet, the slopes lead to secluded villages scattered across the rocky land; and, so near you could touch them, the myriad sparks of the Mediterranean Sea. On a clear day, you can see the shores of Africa; on days of strong winds, your face gets covered with the sand of the Sahara. This is Andalucia, a dreamland between two worlds and the perfect setting for some majestic road trips: today, let me be your guide in the Alpujarras.

This road trip will take you from Trevélez to Lanjarón through typical villages in the Alpujarras mountains. It’s meant as a day trip, but of course you can split it up if you want to spend more time exploring, and particularly if you want to do some hiking – see our section at the bottom for hiking inspiration. 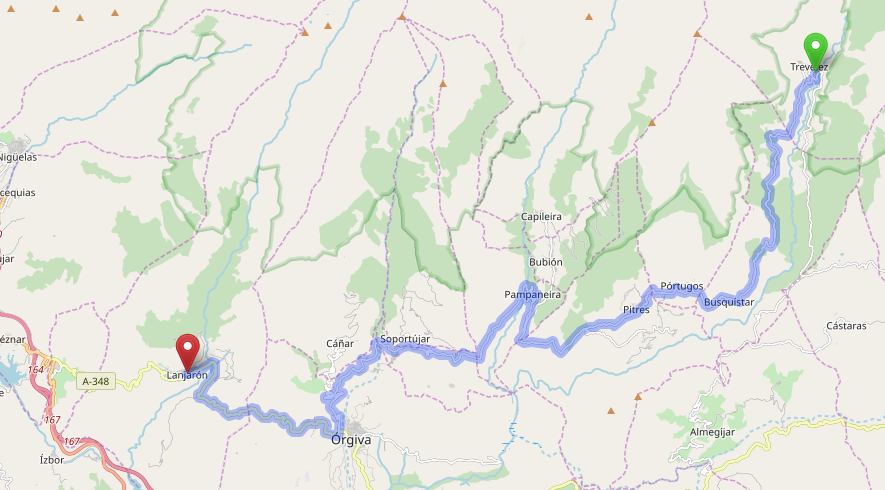 It’s important that you take your time and also enjoy whatever may pop up around you on the way. I cannot tell you “there’s a viewpoint on a right curve at km 42,6”. You make your own road trip in the Alpujarras. Even though we take the same road, it can turn out differently for everyone.

One tip I can give you is not to spend too much time on your first stopovers. A road trip is a bit like an all-you-can-eat buffet; if you stuff yourself right from the start, you’ll quickly have no space left for more.

How to get there

The Alpujarras Mountains National Park attracts tourists all year round, mainly national visitors who come skiing in winter and hiking in the warmer months. It’s part of the famous Sierra Nevada on Costa Tropical, tucked between Almería to the East, Guadix to the north, and the highway connecting Granada to the sea on its Western flank.

Let’s start our road trip in the Alpujarras mountains!

Like many landmarks in Andalucia, the Alpujarras have an Arabic name; you see it by the start of the name in Al-. This is not surprising. The Arabs arrived in Spain in 711 and established themselves until they were booted by the Christian Kings in 1492. They stayed longer in Andalucia than anywhere else in the peninsula, and this is still very visible nowadays. In names indeed, but also in the architecture (the Alhambra in Granada is only one example) and in some customs, eg. the cuisine (fried aubergines with honey are finger-licking good!).

This is one of the highest regions in Spain, and the eternal snow of the well-named Sierra Nevada procures constant water to a wide variety of fruit trees. The architecture is typical of regions were the sun can be an adamant friend; whitewashed and with many corners to create shade. In summer, everything is conscientiously closed so the heat doesn’t come in. 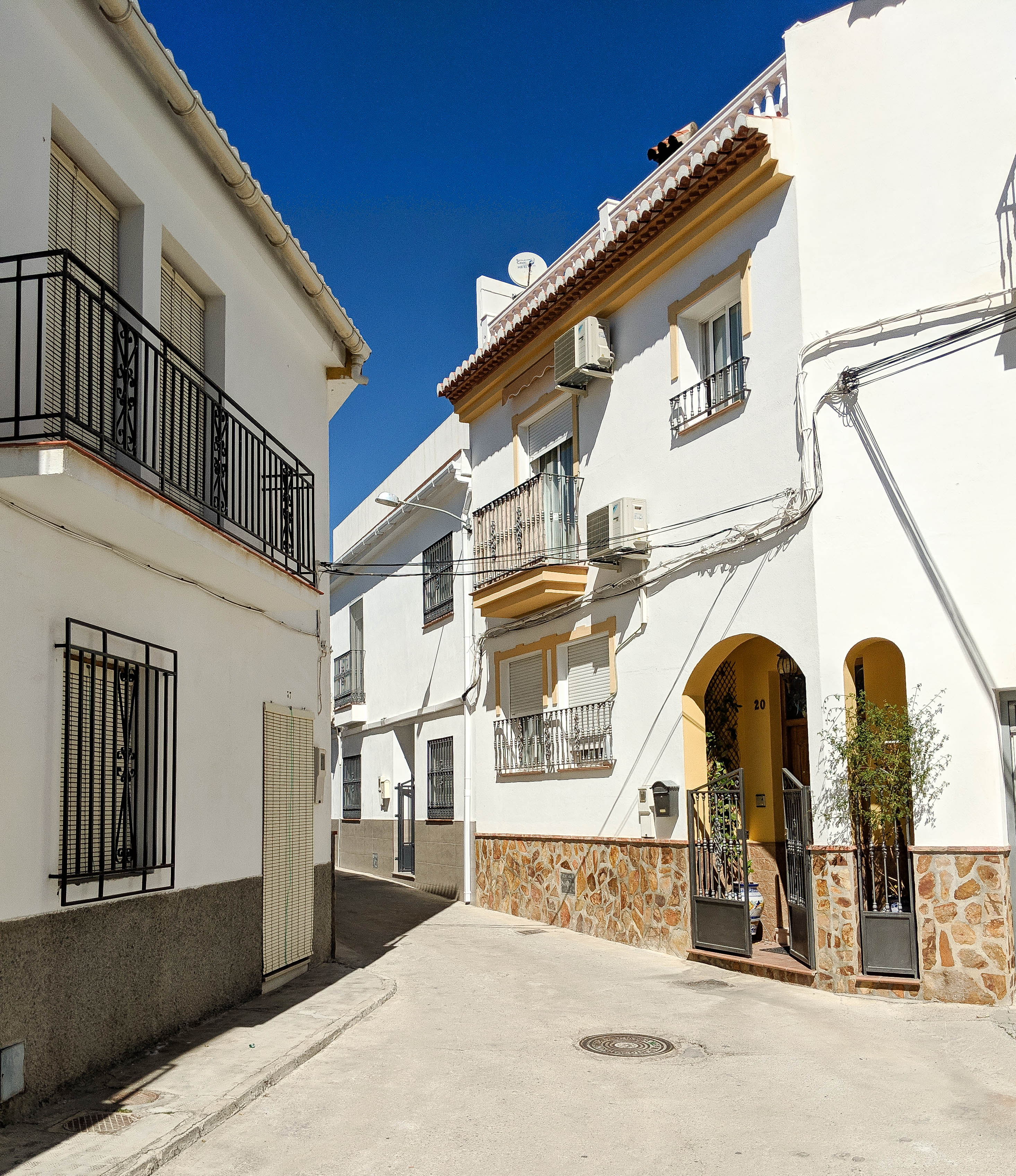 Our journey starts here, in the heart of the National Park. This is the highest village in Sierra Nevada and a die-hard myth declares it’s the highest in all of Spain. This is not the case though; but right now you don’t mind, because the view is as breathtaking as if it were. Breathtaking are also its steep narrow streets – a good appetiser for the villages we’ll walk today.

From the village itself there are no really great views. You’ll need to climb its narrow winding streets and stairs, up until where the village ends and the mountain begins. There, where the hiking path to the Mulhacén mountain starts up, is a first viewpoint. But keep some breath to go further up along the Mulhacén trail and you’ll find some real jewels.

The specialty of Trevélez is ham and some Spaniards come a long way to buy this typical Spanish jamón.

The journey from Trevélez to Capileira takes around 40 minutes for a local, probably more than one hour for a tourist gawking at the landscapes.

On the way, you can stop at a little church and its backyard spring in Pórtugos, shortly after Busquístar; at a modest flower garden for a drink and cake, on a byway a few kilometres before Pitres; or at the majestic Poqueira viewpoint, which is right where the road turns north.

The village of Capileira is without a doubt one of the prettiest in the area. Its white houses, so typical of the Alpujarras region, clung onto one another like the old people adorning its benches. Many covered passageways link the narrow streets together, creating, along with several stairs, a small labyrinth of sorts. 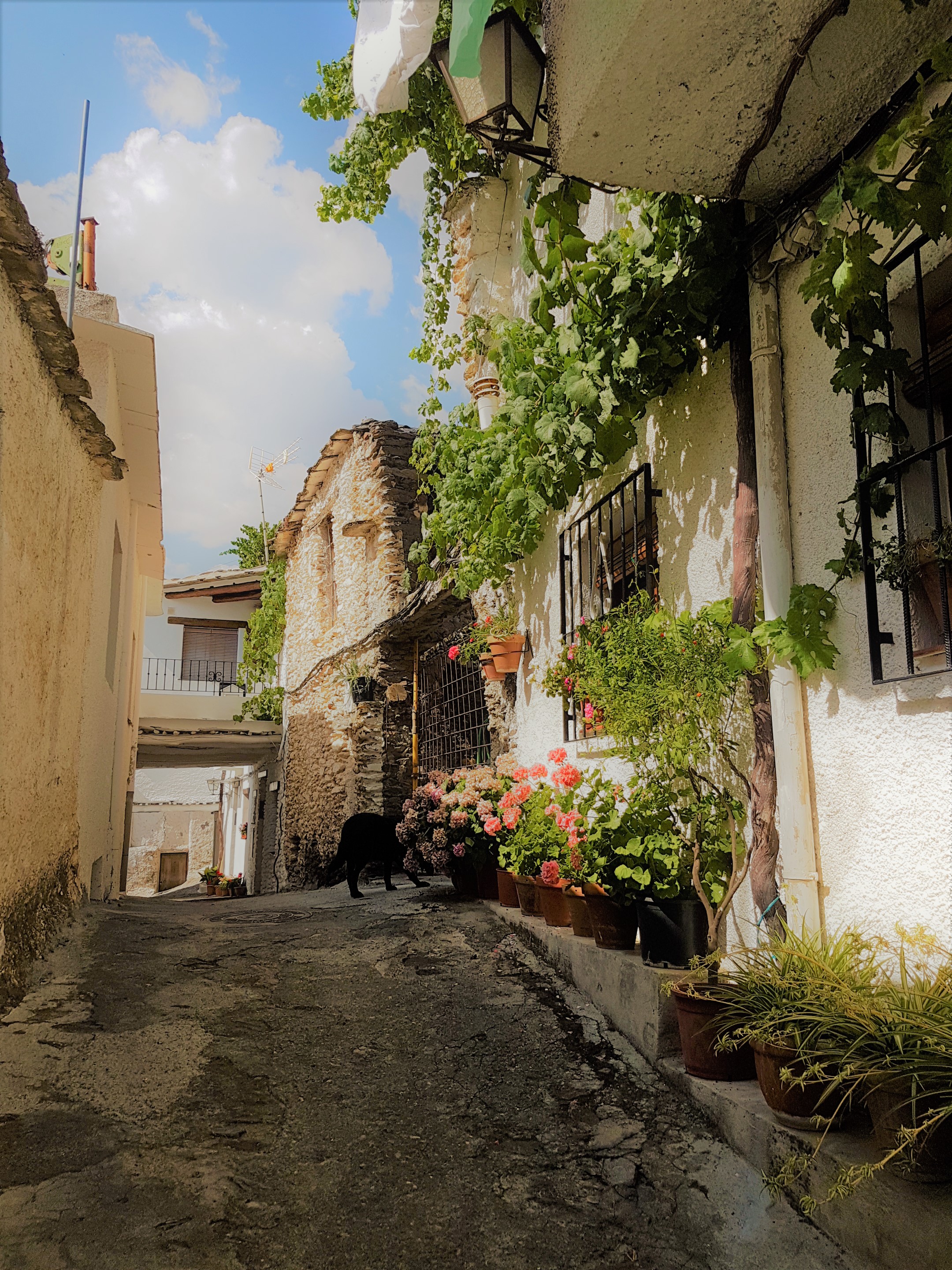 Taking the road back to the south towards Pampaneira, the village of Bubión is very similar and also very pretty.

Pampaneira is substantially smaller but more famed, so expect to see more life there. It offers many options for a lunch break if you haven’t brought a picnic with you. It’s also ideal for a coffee stop or to get water or anything you need for the day out.

There is no chance you miss the main square, Plaza de la Libertad, with its square church. It’s the heart of the village and it pulsates well for such a small place! There are shops specialised in traditional fabrics, in case you want to bring back a souvenir. The village is also famous for its chocolate candies – but that’s a souvenir that doesn’t last long, unfortunately.

On the way out of Pampaneira, you will see the old sturdy building of the hydroelectric plant on your right. It counts with a refuge for bats, with the aim to study them and protect them. 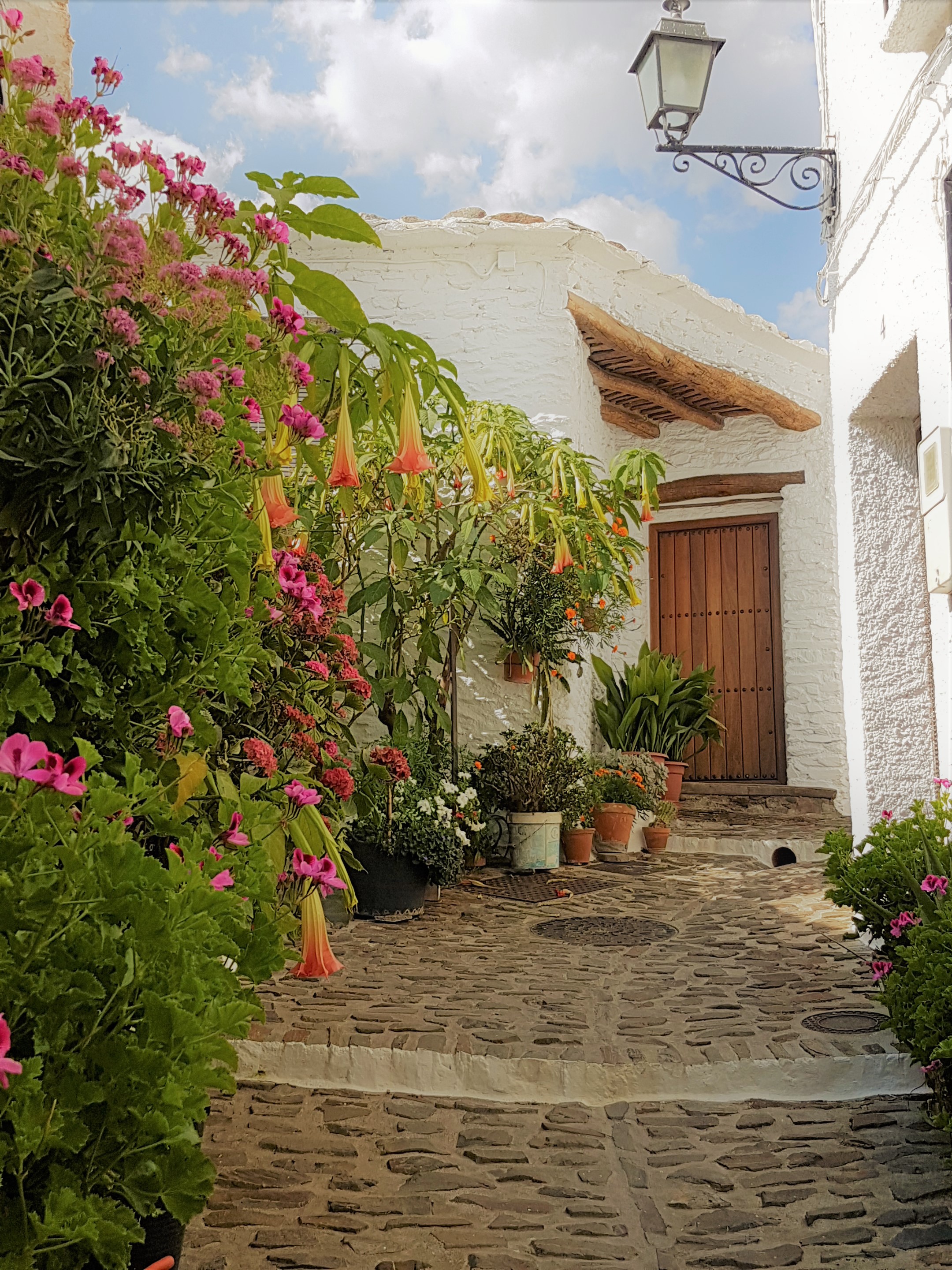 On your way to Soportújar, I recommend a stop at a cute little whitewashed church called “Ermita del Padre Eterno“. It offers stunning views on the valley and breathes a refreshing air of peacefulness.

Soportújar is famous for being a village of witches. You will see it straight away with the Cave of the Witch’s Eye, only a stone’s throw before the entrance to the village. It’s a rather lame reconstruction of what a witch’s cave might have been, right next to the cemetery.

Whatever happened here to make the village earn this reputation has been lost in time. Fact is, Soportújar has created a whole folklore around it, starting with the “Festival of the Enchantment” (Feria del Embrujo), which lasts one week every year in August.

Wander around the village to see the statues of witches cooking a potion or a dragon fountain. Enjoy the enchanting view from the viewpoint in the centre. 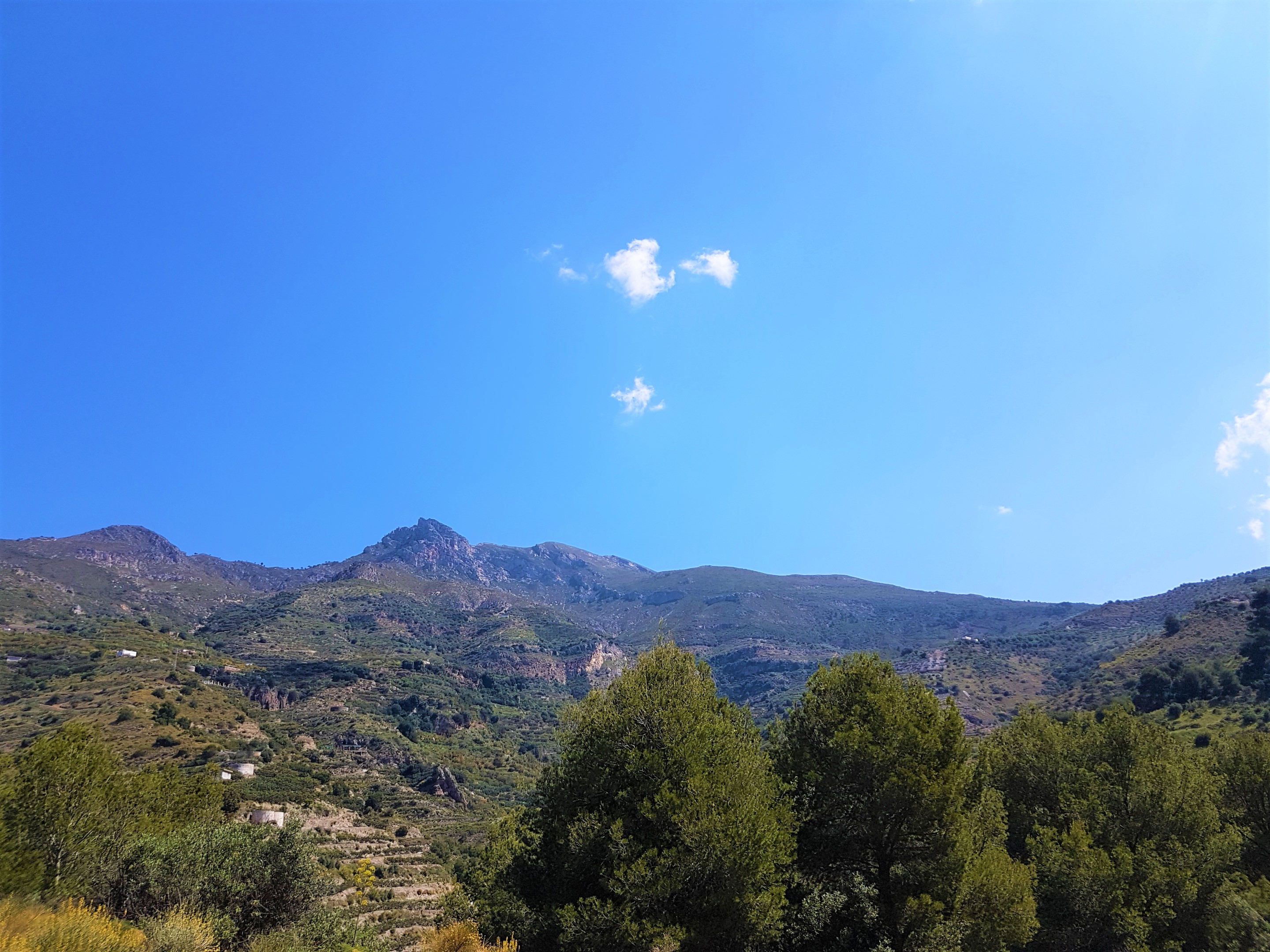 The journey from Soportújar to Lanjarón takes about 30 minutes on a winding road. On the way, there are of course many occasions for jaw-dropping viewpoints. But I can’t think of any exceptional landmark apart from a spacious cave and its appending viewpoint, shortly before the road turns right towards Cáñar. Órgiva is a real town, without the small-village feeling I’ve promised you for this road trip in the Alpujarras.

The thermal town of Lanjarón is probably the most touristy on this list. The fact that it’s the most accessible from either Granada or the coast certainly has a role to play. But it’s always been a thermal destination, ever since the first settlement in the XIIIth century.

One characteristic of Lanjarón is the many public fountains of drinking water that are sprinkled around town. Many people living in the region come here to fill up their bottles, so if you have any, bring them! This is pure fresh water that comes directly from the mountains. The Lanjarón water is even industrialised as one of the most famous bottled waters in Spain. The other speciality of the area is honey and there’s a honey museum slightly outside of the village.

My favourite view is the one on the castle and the valley surrounding it, visible from the southern part of town.

From Lanjarón, you’re only a few kilometres from the A-44 highway that will bring you either north to Granada, or south to the coast (40 km/25 mi in either direction).

Hiking Opportunities in the Alpujarras

Right where we start this road trip in the Alpujarras, from the top of the village of Trévelez, there is a long 8-hour hike that goes up to the Mulhacén peak. With 3,478.6 metres (11,413 ft), it’s the second highest mountain in Spain after Mount Teide, in the Canary Islands.

If you don’t feel like going as far up as that, you can stop at the “Mirador de Trevélez“. It’s not a demanding walk and it doesn’t require hiking boots; proper trainers should be enough. You’ll already get a bucketful of stunning views on both the sea and the mountain range.

There is a short 1-hour (one way) easy hike from the village to La Cebadilla. It’s fairly accessible to anyone who can walk without difficulties, but it’s not crowded either; nothing is really crowded in this part of the world. It’s a circular hike around the river. For your effort, you get nice views and you can visit an abandoned hamlet. A perfect hike for Halloween! 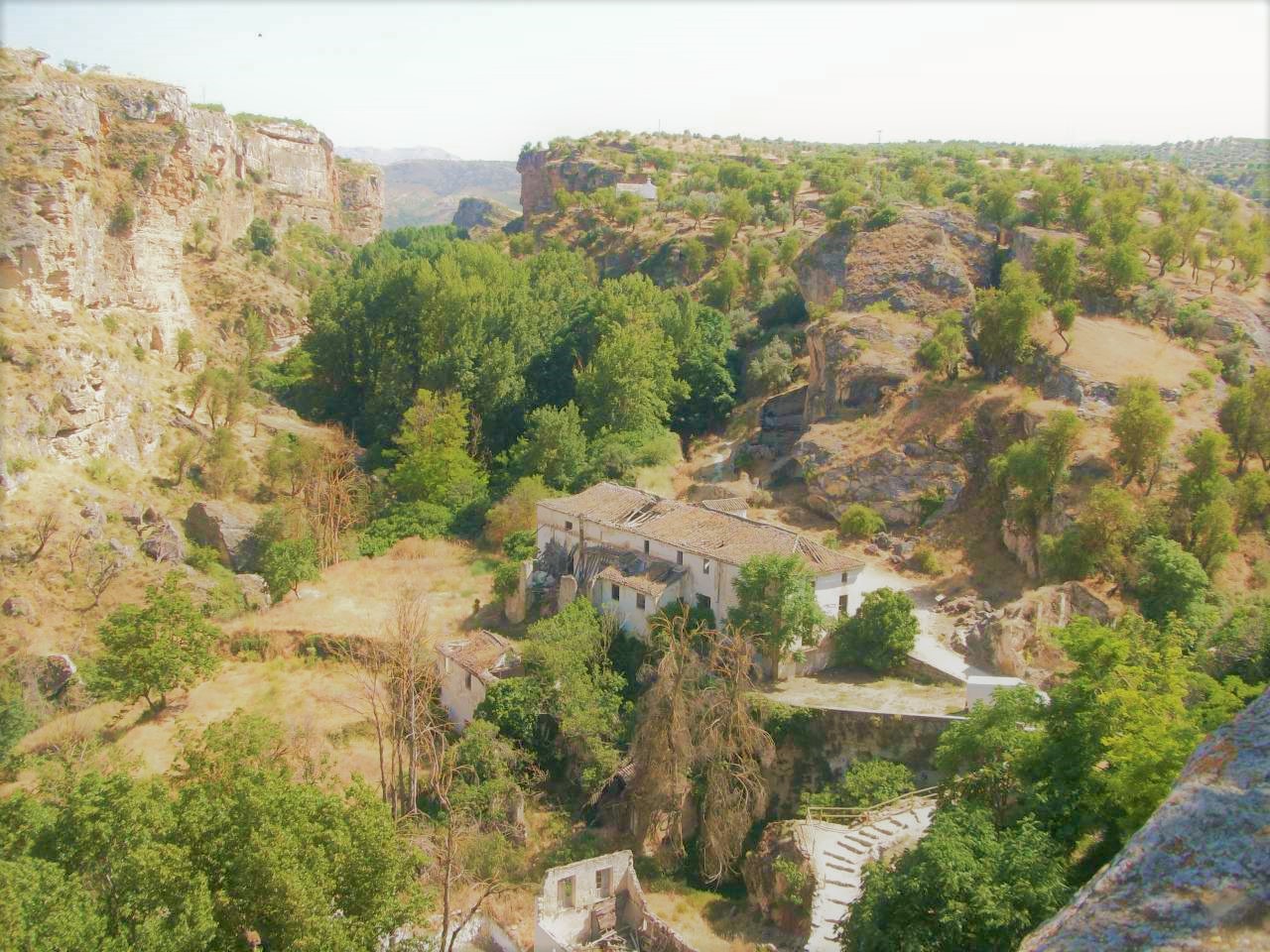 Another walk starting from the same village will bring you to Tajo Cortés (I had to look up the name, I didn’t know it had one). It’s a 3-hour walk one way which climbs decisively to some stunning views on the surroundings. There is a stream, a small waterfall and pools that look like they came straight from the Caribbean. In fact, it reminded me of some of the most beautiful beaches in Colombia.

If you can’t make it until there, there is another viewpoint on the way. But honestly it’s not half as good!

I haven’t done this hike myself but I’m planning to after seeing some tempting pictures. The goal is a large pond formed in the course of the river Almiar. I was told it’s a 2-hour walk from the village but I can’t say any more about it as yet. Please go and tell me how it was in the comments below!

The day is over, and if you planned it well, you’re admiring the sunset from one of the viewpoints along the way. This road trip took you to the villages of the Alpujarras mountain, where time seems to have stopped long ago. If you are still staying a while in the region, I warmly recommend you visit Frigiliana and Mijas Pueblo. And if you enjoyed my company, I can take you to another road trip nearby, this time in the Almijara.

Anthony is a long-time traveller, a polyglot and an all-kinds-of-art-lover. He writes with Anna about eco travels, nature hikes and cultural discoveries in South America on their budget travel blog Green Mochila. You can find them on social media as well: Twitter, Facebook,  Pinterest,  Instagram: 17 thoughts on “A Road Trip in the Alpujarras, Andalucia”