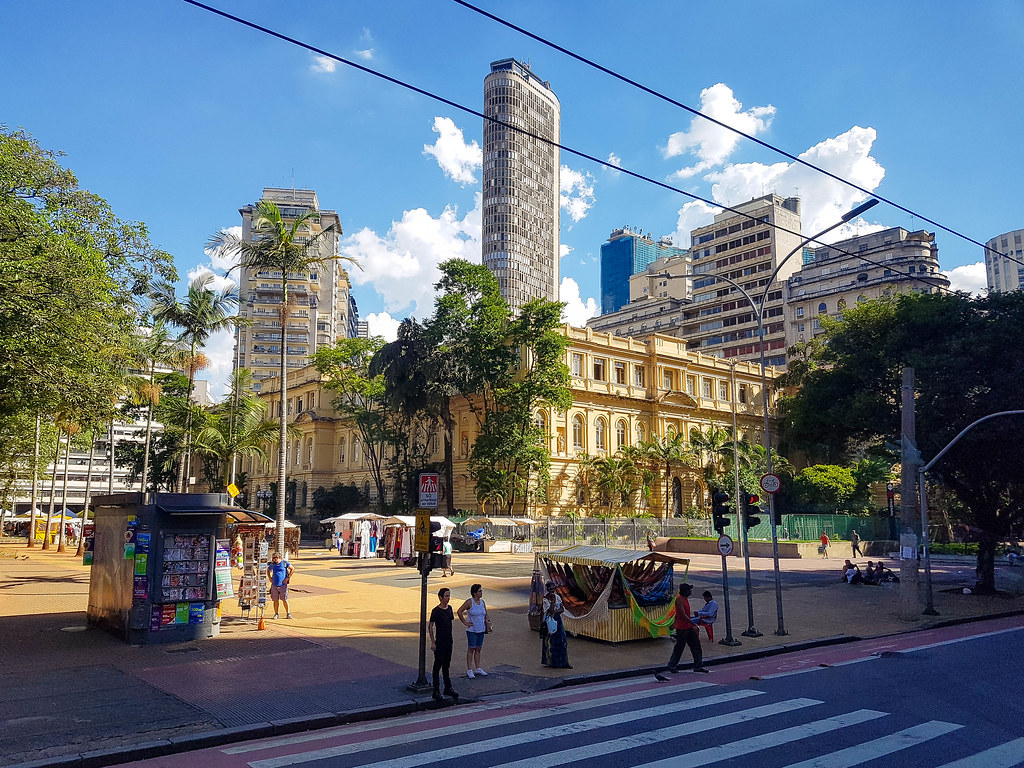 I have to be honest with you: even if I am an avid traveller, even if I have visited over 35 countries in the past 10 years, even if I have an open mind and not many things scare me, I got a lump in my throat when the only option to fly to South America had a 12 hours layover in Sao Paulo. Sure, I have been to Sao Paulo before but just for 4 hours and just to change flights.

I tried to do as much research as I could because I didn’t want to stay inside the airport for 12 hours in the middle of the day. I went online and tried to find forums and Facebook groups where other travellers would talk about their experiences in the city. And that scared me even more. I asked a friend who lived in Sao Paulo for a while and she told me to hire a driver for the day, lock the doors and see the main attractions from the safety of the vehicle. There were so many opinions about how unsafe and how dangerous Sao Paulo is that by the time I finished my research I was sure I would get robbed at gunpoint the moment I steped out of the airport.

How did I prepare for the trip?

A few weeks before my flight I posted a trip plan on Couchsurfing and I’ve ordered anti-theft underwear from Amazon. Yes, as funny as that might sound, they are actually a thing. I even considered buying a cheap phone, just in case, when the robber would demand I hand over my mobile and my wallet. 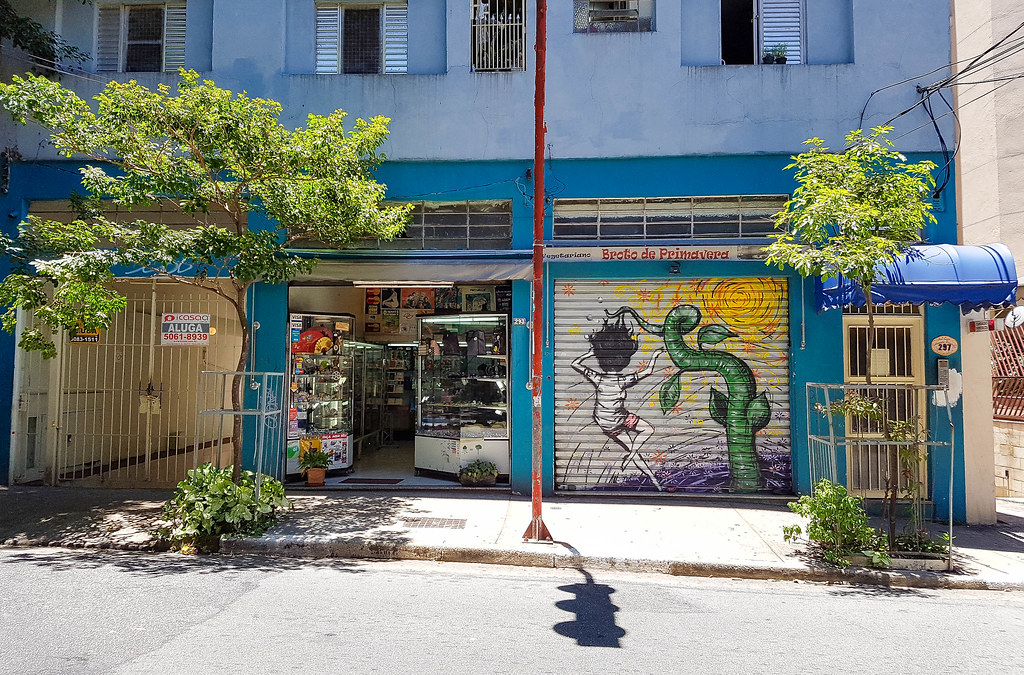 I have had quite a few replies on my trip request from Couchsurfing but none of them looked like it would concretise. However, I did meet another traveller who was visiting Sao Paulo the same day so we exchanged numbers. We exchanged a few messages and he seemed like a nice person. We chatted mostly about our flights to Sao Paulo, as we were both in transit. He was coming all the way from India while I was bored waiting for my flight in Heathrow. Note to self, don’t book again a flight on Christmas Day as there is no public transport, not even to the airport. I guess I thought that it might be better to be robbed in two, for moral support. I know, I keep going on with this but I was convinced that this will happen to me, I had the same feeling as when I said the airline will lose my bag on my way to Cuba. And it did. 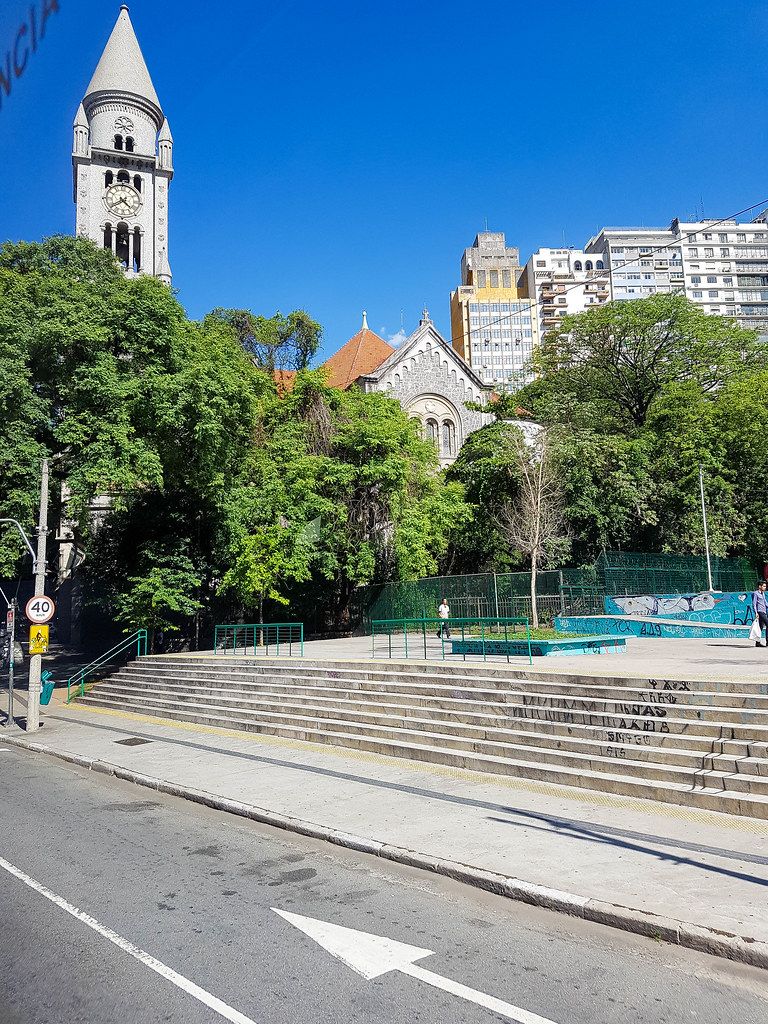 Even at the airport, as I arrived 7 hours before my flight, I had a chat with the checking in agent to see if I can change my itinerary. Unfortunately, there was only one flight to Lima from Sao Paulo, and that was the one I was taking anyway.

Prepare your trip to Brazil with the Lonely Planet guidebooks:

How did Sao Paulo welcome me?

I landed in Sao Paulo at 6am. The immigration process was fast and easy, I think our plane was the first one landing that day as there weren’t many people waiting in the queue. What took ages though was me running around the 3 terminals, trying to find an ATM that wouldn’t charge a fortune in fees.

Then I tried buying a bus ticket into town, but the lady didn’t really speak any English so I had to improvise. In the end I managed to buy a return ticket. Valid for the day before. As I’ve easily made friends with one of the stewards in the bus station, he didn’t check my ticket so I’ve only realised I had an invalid ticket on my way back to the airport. But we’ll get to that story in a bit.

I was meeting Ankur at his hotel so I figured out that I need to get off the bus and then take the underground for a few stations. Rome2Rio app was so useful in helping me getting around this massive city. Cause yes, Sao Paulo is giant, with 12 million people living here! That’s more than half of the entire population of my home country!

As soon as I got off the airport bus I panicked. I looked for the underground sign and rushed towards it, passing through the middle of a beautiful square surrounded by trees. As I was climbing down the stairs to the metro, I looked up for a second and I caught a glimpse of the local life: a newspaper seller was arranging his pile, a man was sweeping the street in front of his building, another woman was checking out the dresses from a street vendor; everyone was minding their own business.

The tube was quite busy. I have expected it though. Through the crowd, I noticed a young boy, no older than 10 probably, making space and leading his blind father (I assumed) towards an empty seat. They were talking and laughing together, with the child acting like a proper carer. They got off at the same stop as me and I’ve noticed how careful and protective the child was with his father.

With the help of Google Maps I’ve made my way down the hill, on a winding street, towards Ankur’s hotel.  It was really hot and I couldn’t wait to take my backpack off. There weren’t many people on the street. When I arrived at the hotel I passed by reception and headed towards Ankur’s room where he welcomed me with a smile and let me use his shower. After flying for 12.5 hours I so needed it. He also let me leave my heavy backpack in his room while we went out.

So what actually did happen in Sao Paulo?

As my time in Sao Paulo was limited we decided to head out straight away and explore the city. Ankur needed a SIM card so we went inside the first mall in our way, after the free hotel shuttle dropped us off at the corner of Avenida Paulista, the city’s main avenue. With skyscrapers on both sides of the road, Avenida Paulista is the financial centre of the city and home to South America’s most complete fine-art museum, the MASP. Being quite the metropolis, there are plenty of things to do in Sao Paulo.

But first things first. We were both very hungry and as it was lunchtime by now, we stepped on an adjacent street searching for a restaurant. Without internet, we ended up at Adoun, where we each had a wrap as part of a meal deal. Nothing special, nothing Brazilian, but the staff was nice and the food was good. 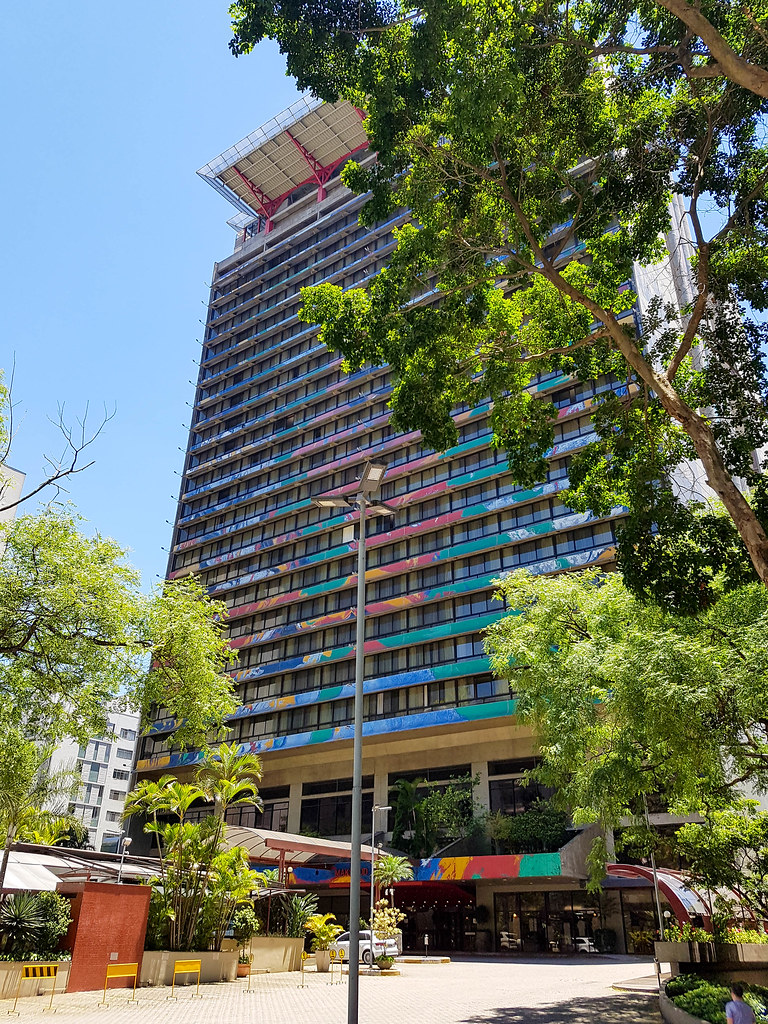 After lunch, Ankur suggested to go to the Liberdade neighbourhood, which was recommended as a must-see. We walked there, passing through some interesting places, with buildings covered in fascinating street art and poorly looking houses rising behind them. Because we were in Brazil we had to have a local coffee so we stopped mid-way, at a tiny local establishment. There were only three tables inside, each of them covered with coffee beans. The lady at the counter didn’t speak English but she was so nice to us, happy to welcome two tourists in her little coffee shop. 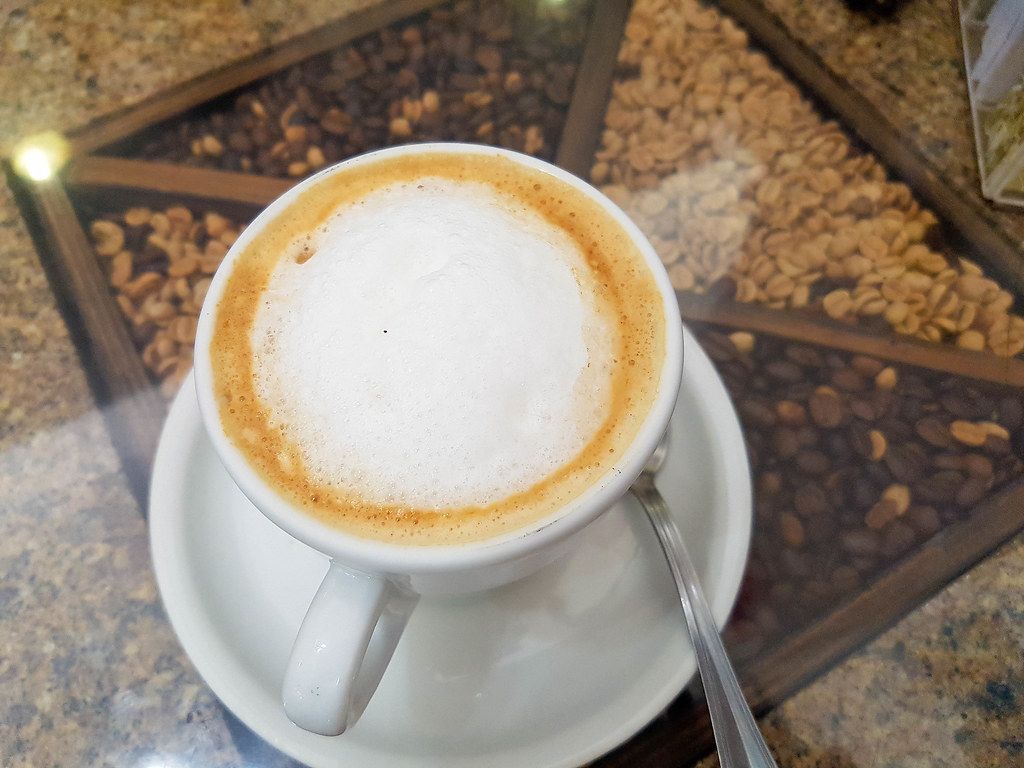 We knew we reached Liberdade when we stepped through the tall red torii arch, its entrance. Liberdade is also called the Japantown because it is the home of the largest Japanese community in the world outside Japan. In the past, this area was called Campo da Forca (Field of the Gallows) and until the late 19th century this was the place where slaves and convicts would be executed. In the early 20th century, the Japanese immigrants started to move in due to the cheap apartments and the proximity to the city centre and implicit to their work places. 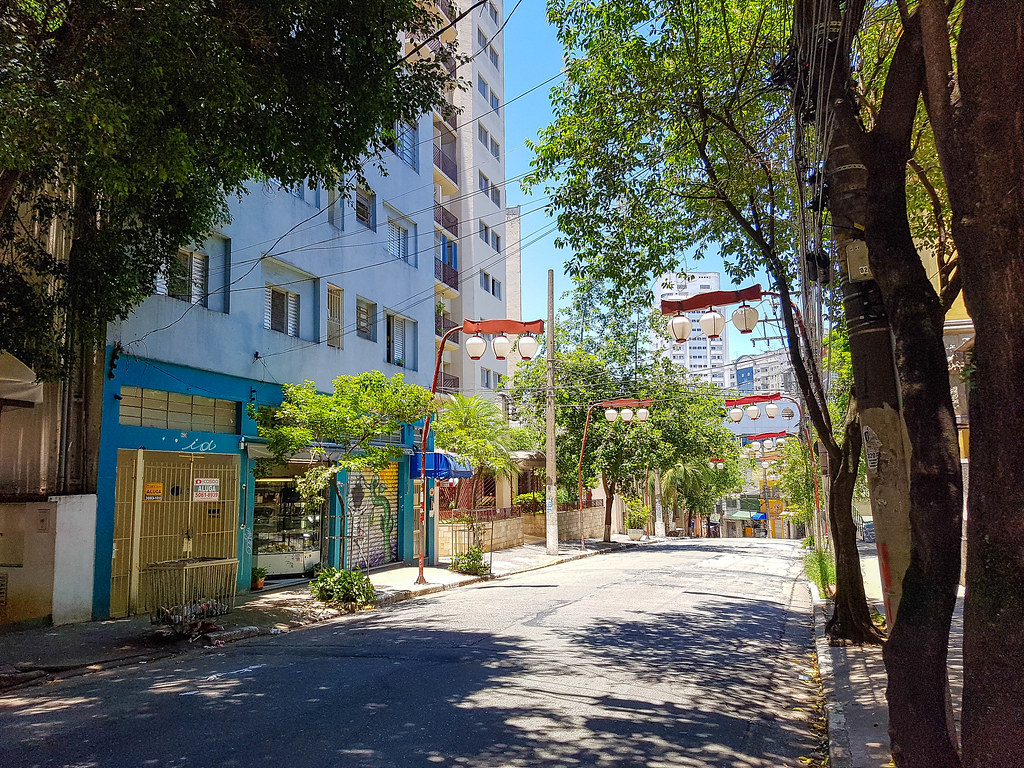 Today the neighbourhood is peaceful, with red lamps every few meters and plenty of places to eat. We stopped at one of them to have a refreshing beer, as the temperature was easily stepping over 30 degrees. Again, we were the only tourists and we had to point at what we wanted, but even so, we were still treated the same as any other local customer.

I was actually loving my time in Sao Paulo! Unfortunately though, I had to catch an evening flight so we called an Uber to take us back to the hotel. The price of the journey was the equivalent of around 5 dollars and we wondered how do the drivers make money with fares so low… I got my backpack, said goodbye to Ankur and he called another Uber for me to take me back to the bus station, as it was already too late to take the underground. The driver was very nice again, he tried to communicate with me using Google Translate and was excited to have a tourist in his car. At the end of the journey, as neither of us knew where the airport bus station was, he even went inside a nearby hotel to ask for me, to make sure I am in the right spot.

Remember how I told you that I managed to buy a bus ticket for the 25th of December instead of the 26th? This was the moment I found out, when I handed it to the bus driver. He kept pointing at the date, I kept smiling and shruging my shoulders as a sign that I have no idea what the problem was. Searching hard through my memory I managed to say a “manha”, “retorna bilhete” in Portuguese and managed to make myself understood that I bought the return ticket that morning from the airport. We all laughed and he invited me to take a sit inside the bus, offering me a bottle of water as well.

Now, what was the point of this story? What happened in Sao Paulo? Nothing! I left home being afraid of this city, fearing everything I have read online. I arrived here only to discover a beautiful metropolis with very friendly and helpful people. Sure, things can happen and you should be prepared for any situation that may arise, but you shouldn’t let your fears ruin your trip or else you won’t be able to enjoy it. I would love to return to Sao Paulo and spend more time discovering the city, going to Ibirapuera Park, visiting the museums, trying out the local food and experiencing the night life. I’ve heard is really good! 54 thoughts on “About Traveling Misconceptions: My Experience of Sao Paulo”