In the last day spent in Varanasi we visited Sarnath (also known under the name of The Deer Park), 13 kilometers from the city, the place where Buddha delivered his first sermon after his enlightenment. There are  lot of different temples in Sarnath, including an 128 feet high stupa, that marks the spot where Buddha gave his first sermon to five disciples.  A stupa is a Buddhist shrine shaped like a dome, containing relics of the Buddhist monks, often buried in a seating position.  It is also a place of meditation and a very peaceful place, similar with Sikkim, in the North of the country.

The legend says that Buddha has spent the following rainy season in Sarnath, and from five monks grew to 60, that left to teach the Dharma to others. By the third century, in Sarnath were living more than 3000 monks and the town became a very important center for culture and arts. At the end of the 12th century, the town was destroyed by the Turks and it remained like that until the British began the restoration, in 1836.

Sarnath is a very peaceful and quite place to walk around. Different Muslim nations have build temples here, among them being Thailand, Japan, Tibet, Sri Lanka and Myanmar. We headed first to the Chinese Temple. We entered to big red gate, decorated with paper lanterns and stepped on the alley that split the garden in two equal parts.  It was a very small temple, too small for us to get inside. In the middle of it there was a big statue of Buddha, on top of which a rainbow shaped form was painted on the wall. The room was filled with flowers and smaller statues of Buddha in different parts of his life.

If you are interested in visiting another Buddhist Pilgrimage Centre, check out these Sikkim Tour Packages to the place also known as the land of monasteries. 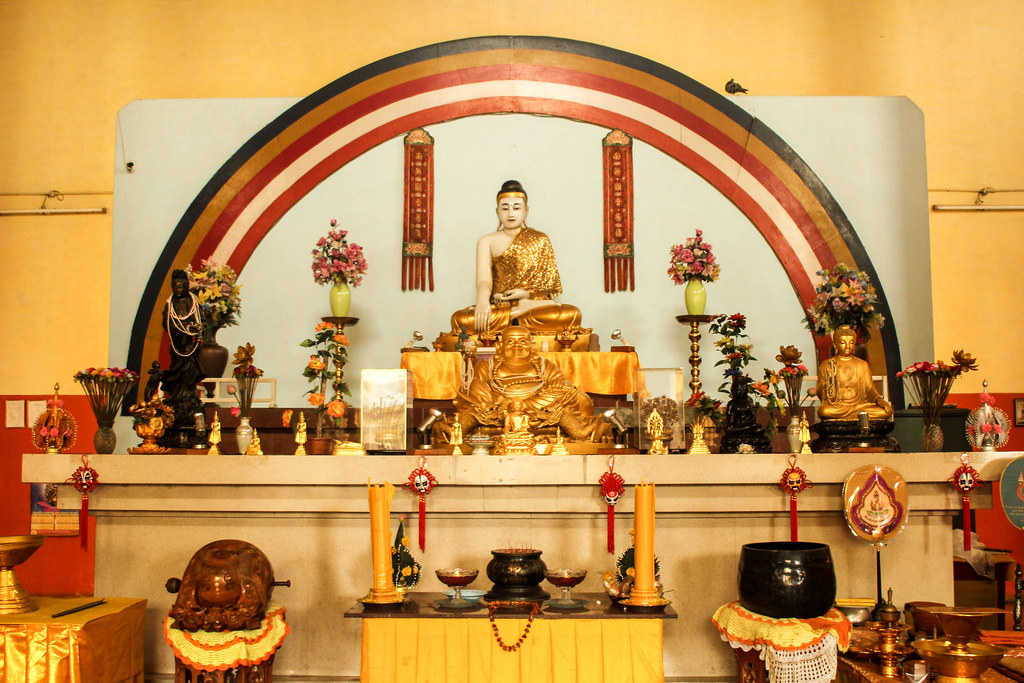 From the Chinese Temple we headed forwards towards the Sri Lankan Temple, passing by the Sarnath Museum and the Japanese Temple, stopping at the Stupa, which we admired from behind a fence (that’s why the lack of pictures). We took our shoes off and went inside. The Sri Lankan Temple is probably the most famous out of all, here in Sarnath. It was built in 1931 and it’s the home of Buddha’s relics found in Taxila. The walls of the temple are decorated with scenes from Buddha’s life, which were made by Kosetsu Nosu, a Japanese artist. Near the Sri Lankan Temple, there is the Bodhivriksha (The Bodhi Tree), which is considered the most sacred free for Buddhists because when Buddha attained  enlightenment, it was under this tree only. The Bodhi Tree is surrounded by a lot of prayer wheels and a wall of Tibetan prayer flags. 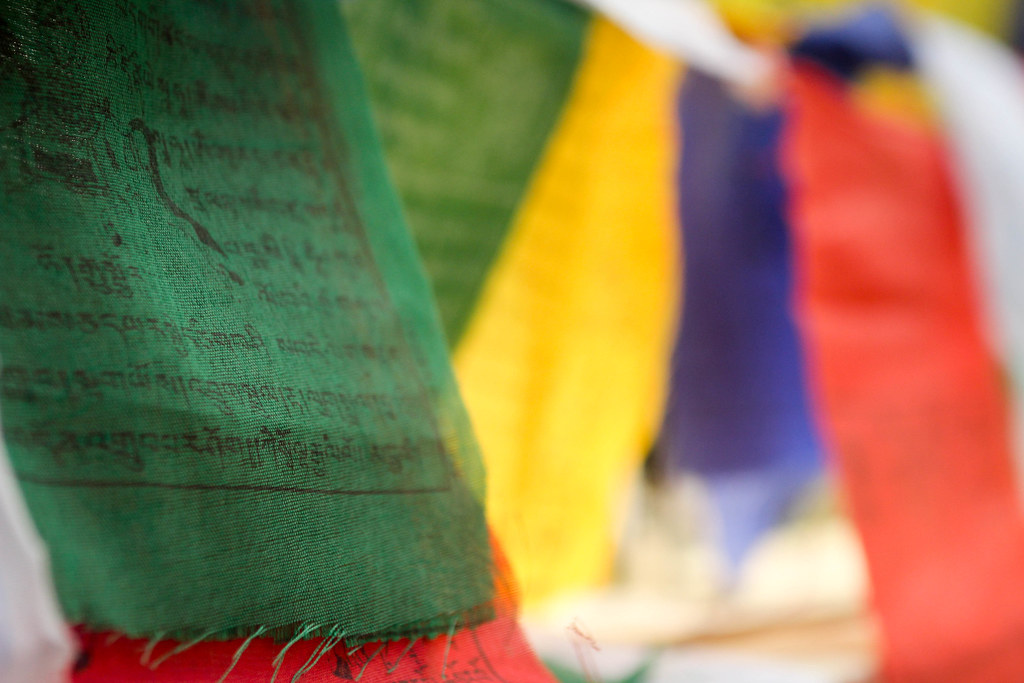 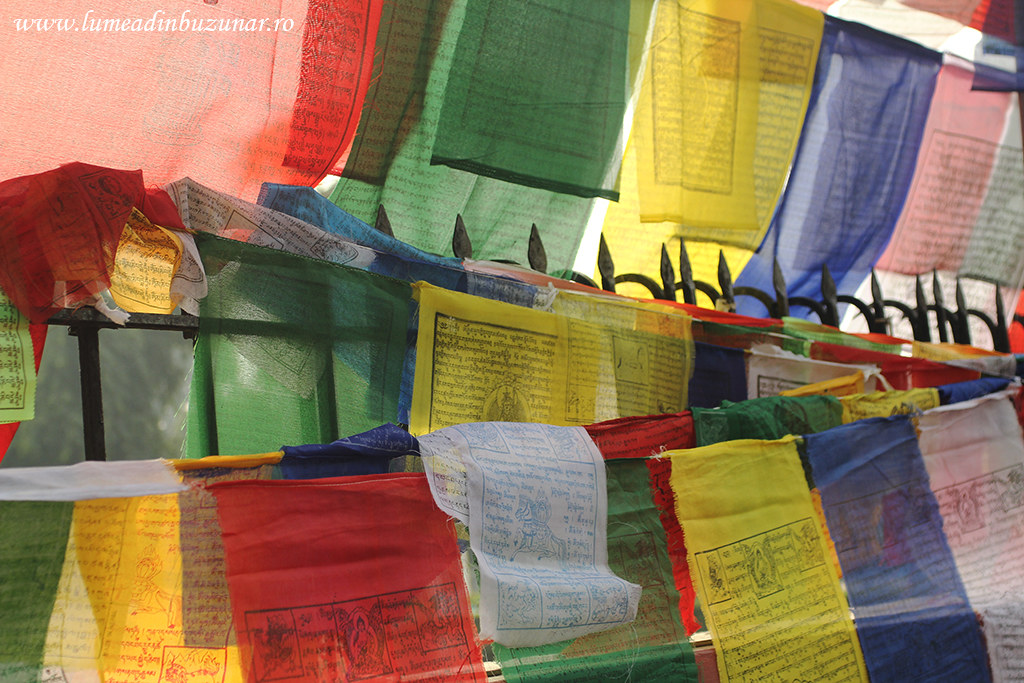 At the end of our trip to Sarnath we visited the giant statue of Buddha. Back in Varanasi, we had a late lunch at a street food joint. We sat down on plastic chairs, at plastic tables, and ordered our food using the images that decorated the walls. The people running the place didn’t speak English and we didn’t speak Hindi, but in the end we had a delicious meal. What we ate… no idea! After lunch we went back to the hotel to take our bags, and we headed towards the train station. Our adventure was ending and we were heading back to Delhi. The train journey was very long, it took over 16 hours.

Back in Delhi, we split into groups again and we went exploring the Paharganj bazaar. This is the backpacker area of New Delhi, with hotels at every step. It is a very lively area, going on for miles, all the way to the train station. I bought myself a nice scarf as a souvenir and an Elephant embroiled pillow case for my couch. Here, in at the corner of Main Bazar Rd with Rajguru Marg, there is one of the best lassi shops in the whole area. Even now, when I think about it, I can remember it’s sweet sugary taste. Don’t miss it!

We spend the evening by having dinner on the rooftop of our hotel, saying good-bye to each other. Some of us had their flights that night. Our guide was very sweet, he bought two bottles of wine (wine is very expensive in India) and he gave each of us a hand painted postcard, together with a magnet and a few words about how great the tour was. It was so thoughtful!

For dinner I finally had butter chicken, one of my favorite dishes in the UK. And to be honest, it was a bit disappointing compared with all the other amazing curries I had during the past three weeks. 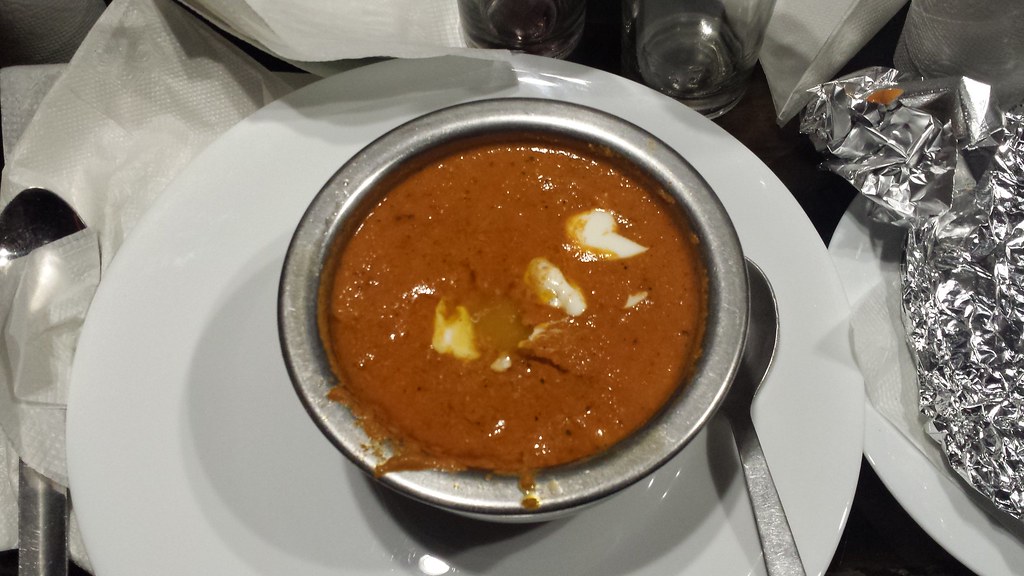 The last day in Delhi I’ve spent it with my friend Sandeep. We visited Akshardham, a new temple complex opened in 2005, which is massive and attracts 70% of the tourists from Delhi. The whole complex is dedicated to Swaminarayan,  the central figure of a modern sect of Hinduism known as the Swaminarayan Hinduism. The security at the temple is very strict, and photography is forbidden. You have to leave all your belonging to a deposit area, where you are filmed so that you can be identified later when you pick them up.

The complex is huge, and it consists of the Akshardham Mandir (the main temple), the The Hall of Values (a journey through Swaminarayan’s life where robotic puppets are used), the IMAX theater (where they show a movie about Swaminarayan to which I slept through) and a boat ride (through the history of the culture and heritage of India). These are the main exhibitions.

It is an impressive place to visit and you cans spend the whole day there if you want to see it all. Unfortunately the sun set and we had to go back to the hotel. It was time to say good bye to India!

32 thoughts on “Encounter with Buddhism, back to Delhi and goodbye India!”