Surrounded by forests and at the confluence of the Sambre and the Meuse rivers, overlooked by the Citadel, Namur is a charming old town. Off-the-beaten-tourist-track, traditional and with a beautiful architecture, Namur will sweep you off your feet and make you fall in love with it through the kindness of its people.In this post I would like to tell you which are the best things to see in Namur. If you want to read more about the city, check out my guide on unique things to do around Namur and the best places to eat in Namur.

Check out my review of Les Auberge de Jeunesse, my choice of accommodation in Namur. 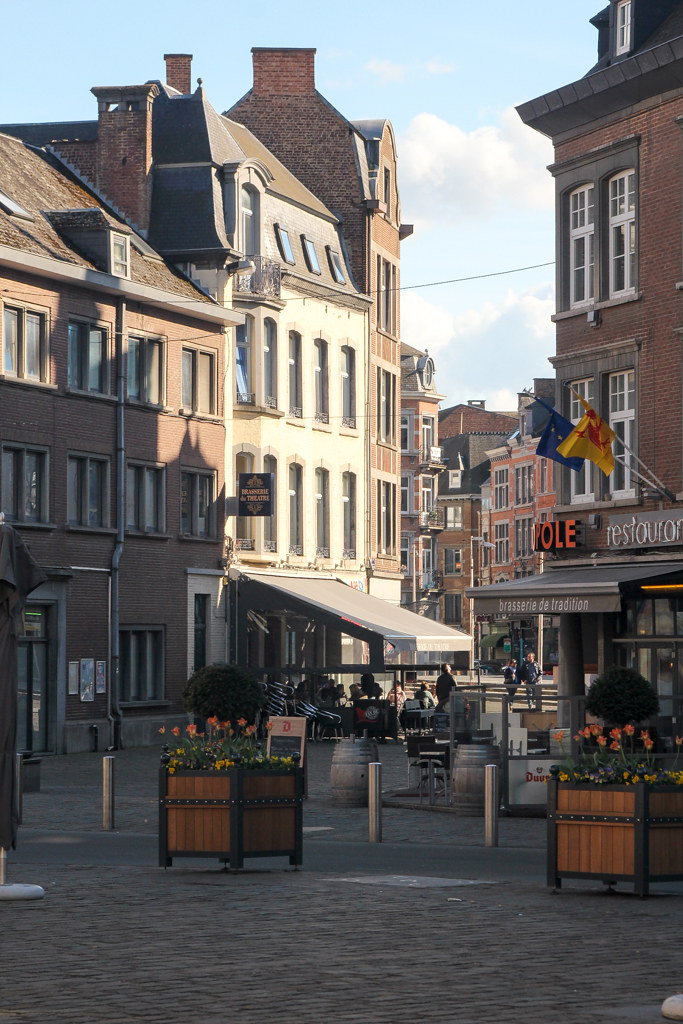 I must confess that I didn’t hear about Namur before last year’s World Travel Market in London, when I met the wonderful team from the Touristic Office and the Citadel, who invited me to visit their city. Namur is the capital of Wallonia, the French part of Belgium, hosting the Walloon Parliament, its Government and administration. It is about 1 hour and 20 minutes away by train from Brussels and only 40 minutes from Charleroi. If you are arriving by plane, this is the closest airport. Charleroi is also the Belgian airport for low cost flights. 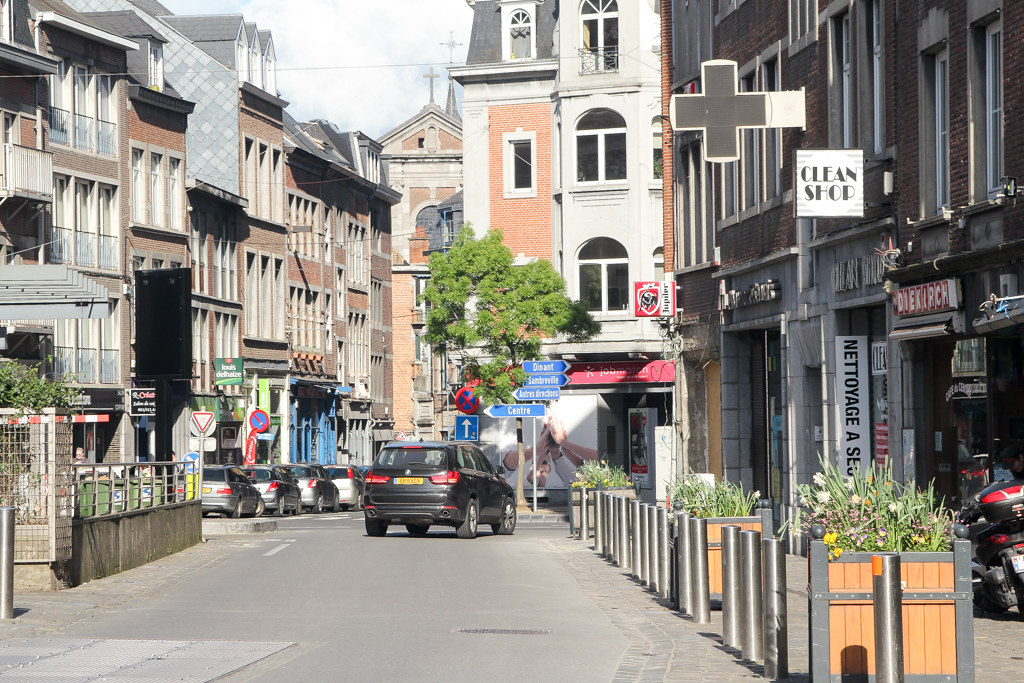 One of the first things you notice when you look up towards the Citadel of Namur is the giant golden turtle overlooking the town. Involuntarily ask end up asking yourselves: “what’s with the turtle?”.

“Searching of Utopia”, the official name of the statue, is a work of art created by the Belgian contemporary artist Jan Fabre. The statue is made from bronze and covered with a thin layer of gold, to be protected by the weather conditions. It depicts a giant sea turtle carrying a representation of the artist on its back. 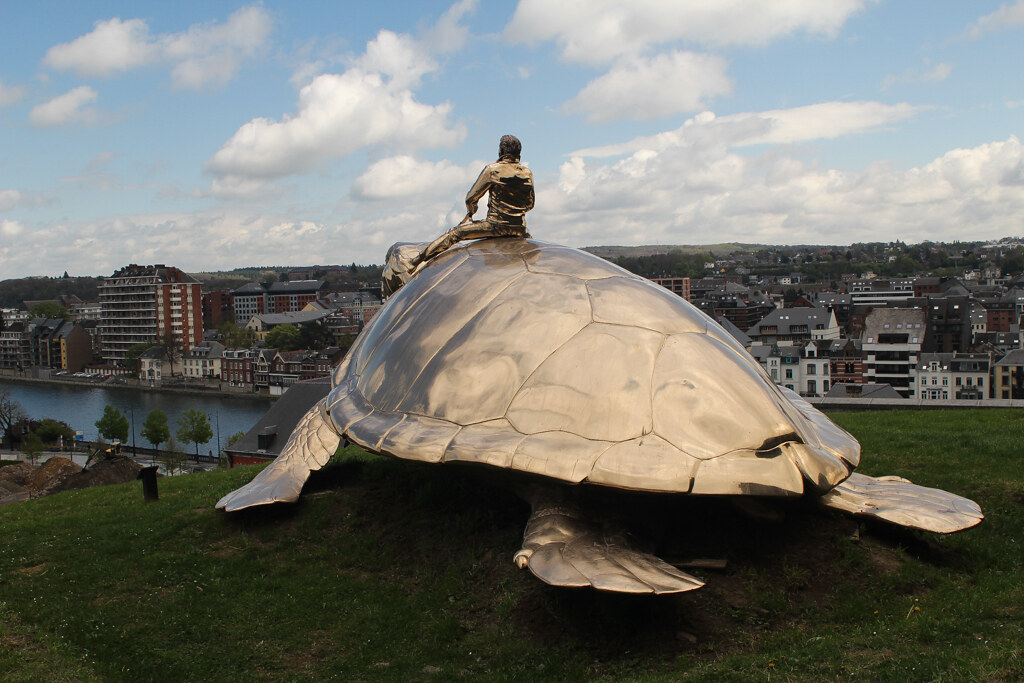 The statue arrived in Namur in 2015, with the “Facing time. Rops/Fabre” exhibition. The people of Namur loved is so much that the town ended up buying the statue and make it a symbol of the city.

The exhibition, “Facing time”, created an itinerary through the city, sharing the connection between the two artists. Jan Fabre was inspired by Felicien Rops, both artists having a very bold approach towards the human taboos and the society’s decadence. Most of Rops’ work was found unacceptable by the time’s society due to the eroticism and satire in it. 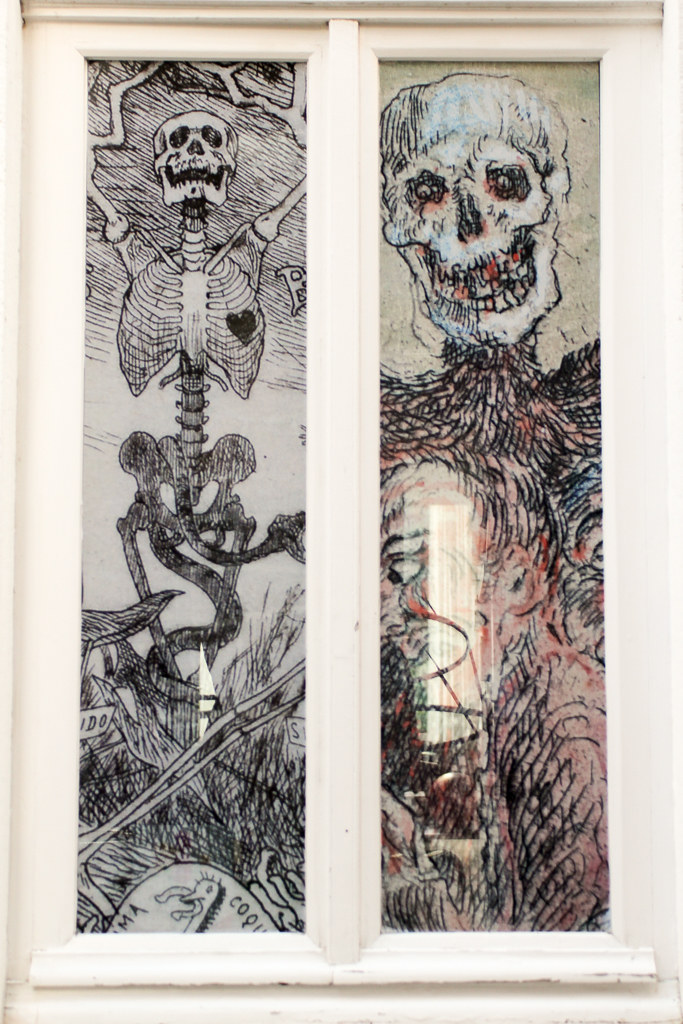 Today you can admire his work at the Felicien Rops Museum, in the old town of Namur. Situated on a quiet street, the museum displays all aspects of the artist’s work and the important stages of his life in Namur, Brussels and Paris. The combined ticket for the museum and the temporary exhibitions is 10 euros for adults and 5 euros for students and seniors (as per 2017).

The biggest touristic attraction of Namur is the Citadel, the oldest permanent settlement in the Benelux and one of the largest fortresses in Europe.  The view from the top of the Citadel towards the town is spectacular, especially from the observation point situated at the tip which looks like a ship’s bow. From here you can admire the panorama of the entire city and look far away, over the river and the stone bridges crossing it, towards the town of Jambes. 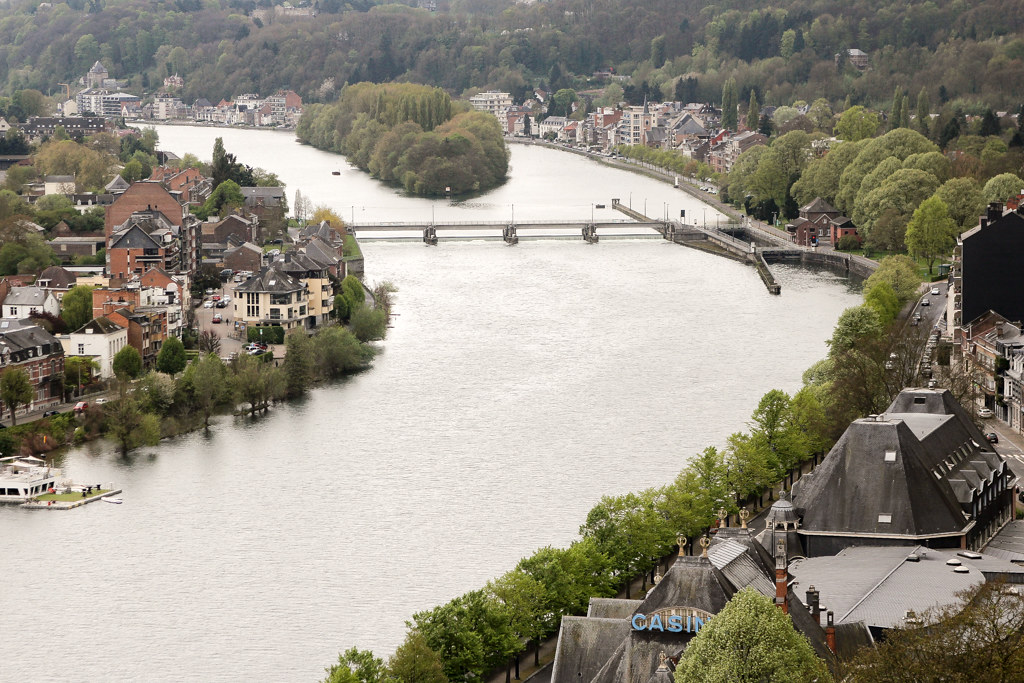 To visit the Citadel you can either take the bus or hike on one of the different routes going up, through the woods or on the road.

The Citadel dates all the way back from 937 when the first references state the existence of a wooden castle belonging to the nobility of the period. Over the years the construction kept evolving so that in the 14th century a mighty stone castle was built, on three levels. Today, the only remains that challenge our imagination to think of how the Castle of the Counts used to look like are three medieval towers: the Oven Tower, the Treasury Tower and the Cistern Tower. 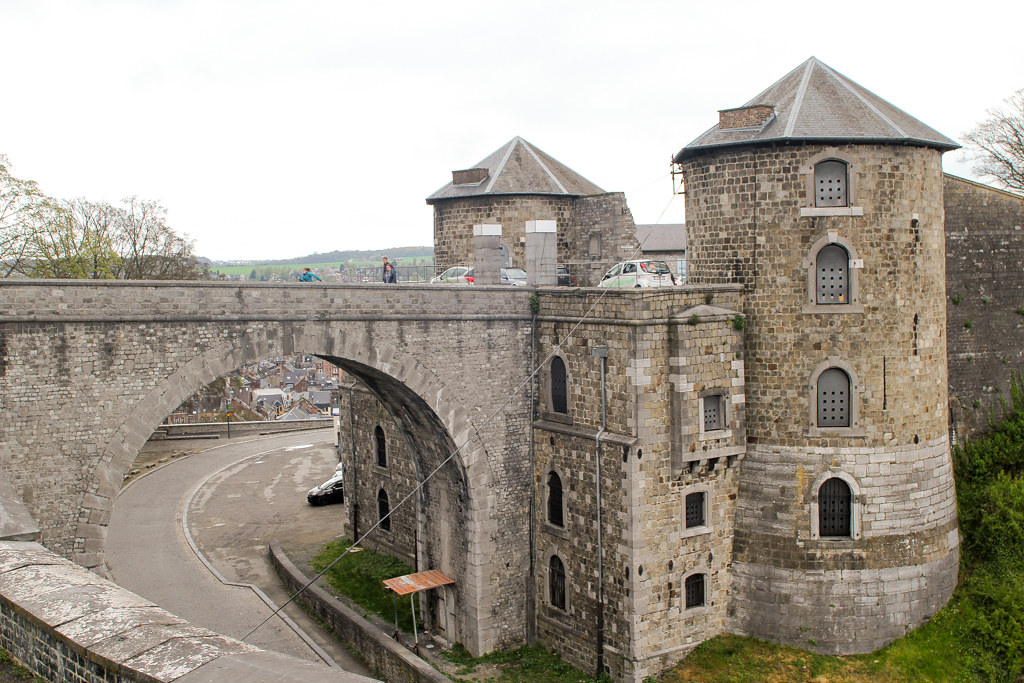 During the years, with the strategic position of Namur on the trading routes, the fortress has been fortified over and over, with the development of new cannons and military equipment. A large network of underground galleries has been built as well, because the enemies started to dig into the rocks to conquer the fortress. In the 18th century the defence built protection forts up to 1000 meters away from the old medieval castle.

Many military architects have contributed to the fortification of the citadel, the most famous of them being the French Sebastien Vauban, the most celebrated representative of the profession. After the siege from 1692, when the city of Namur was conquered by the French because of Vauban’s engineering knowledge, he improved the fortifications by adding armouries, barracks and underground warehouses.

In history, the citadel has been under many different occupancies (The French, the Dutch, the Spanish), and all of them have added their own fortifications and defence to it. 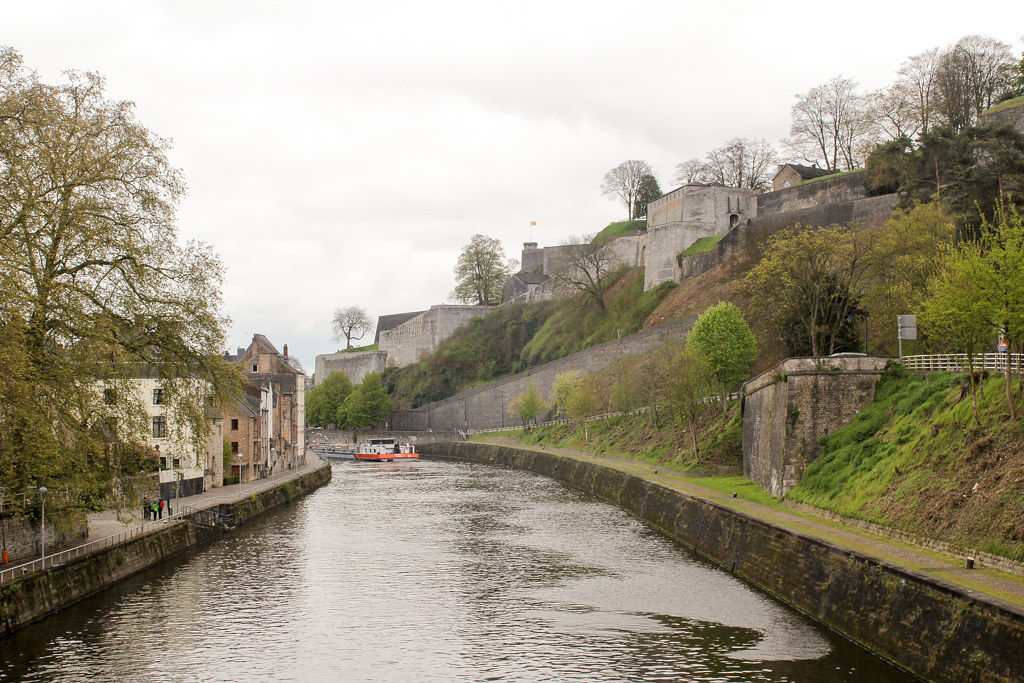 In 1975 the Citadel has been demilitarized and in 1978 it has been completely opened to the public. Today you can spend an entire day on the grounds. You can visit the underground tunnels, see the fantastic exhibition in the brand new Terra Nova visitor centre, take the mini train for a ride back in history, take a peek inside Guy Delforge’s perfumery or just enjoy the beautiful views and the natural environment.

The price of a guided tour at the Citadel is 6 euros and the admission to the visitors centre is 4 euros (as per 2017).

The Belfry is the only monument in Namur on the Unesco list of protected sights, built in 1388 as part of the city wall. During the history, the belfry had both a military role, by protecting one of the city gates but also civilian, by indicating the time, signalling the opening and closing of the gate and announcing events. 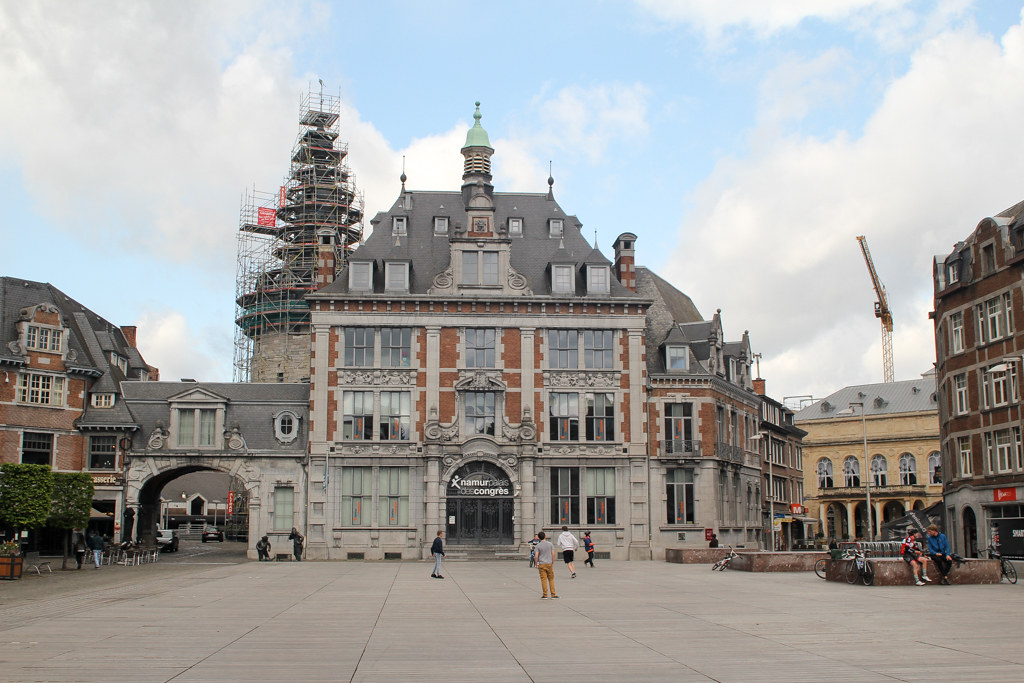 Unfortunately when I visited it was under reconstruction and I wasn’t able to take a good photo of it.

St Aubin’s Cathedral was built in 1559 following the plans of an Italian architect, Gaetano Matteo Pisoni who designed it having Vatican’s San Pietro Cathedral in mind. This is why St Aubin’s is the only cathedral in Belgium built in academic Late Baroque style. The wide windows around the dome allow a lot of light to come into the Cathedral, making it look very spacious. 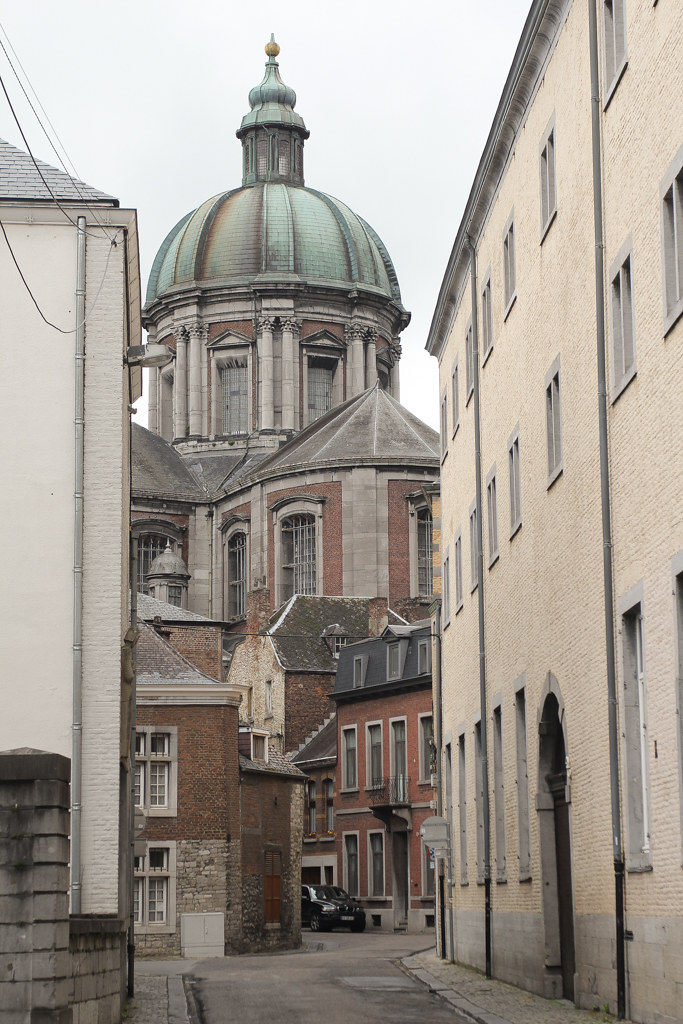 The interesting thing about St Aubin’s Cathedral is that inside, the altar includes a casket containing the heart of Don Juan of Austria.  He died of typhus at only 31 years old, on a battlefield near Namur.

Every time I passed by Saint Loup church it was closed so I could only admire its beautiful Baroque architecture from the outside. The church is located on a narrow street, making it impossible to look at the higher details. To catch a good look of the church you have to go to the citadel, from where you can admire it from above. 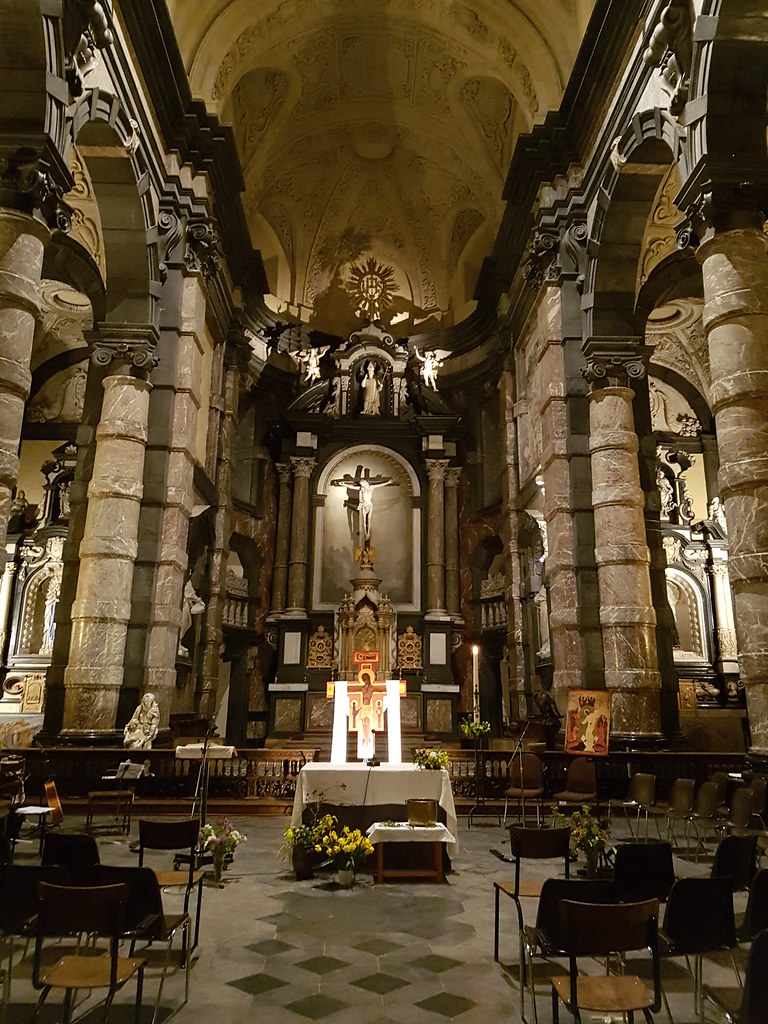 However, one evening, as I was passing by, the doors were open and some sort of event was taking place inside. As soon as I stepped in I was blown away by the décor: high pink marble columns, wooden round stairs, detailed carvings on the ceiling, black marble arches… I don’t think I have ever seen a more beautiful church in all my travels!

Even Charles Baudelaire was impressed by this church: “Saint Loup is different from anything I have ever seen by the Jesuits. The interior of a catafalque decorated in black, pink and silver. Confessionals, each different in style, fine, subtle and baroque, a new antiquity.”

Namur and its folklore

Namur’s folklore is very much alive, with events happening each month. Probably the most popular one is the Fetes de Wallonie, a 5 days event full of music, traditional games, dishes and drinks from the region. 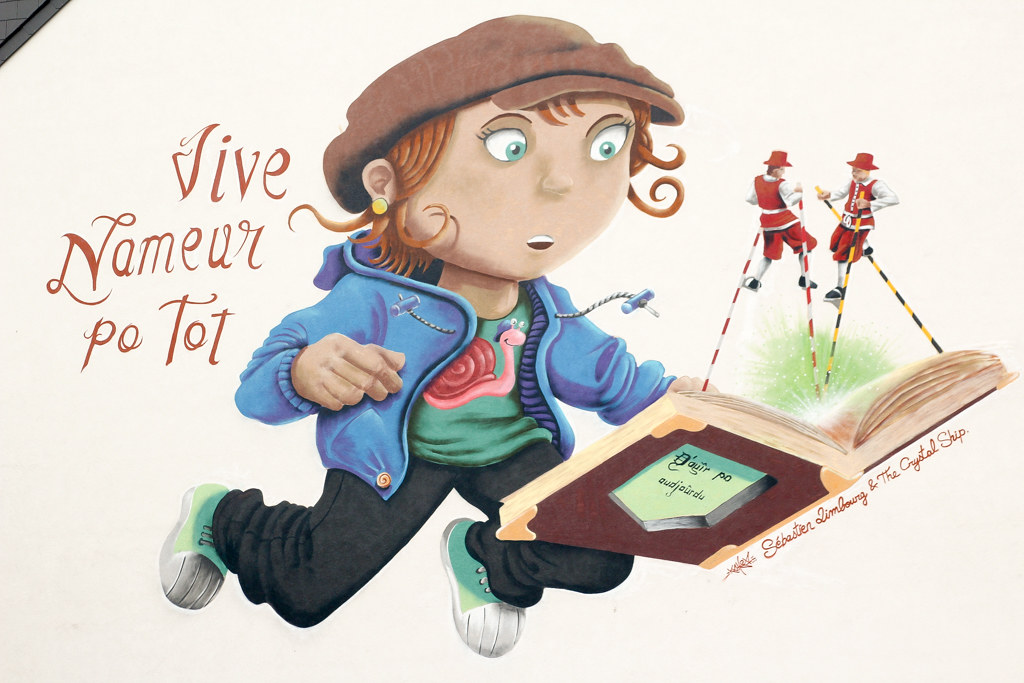 A long tradition in Namur is the Combat d’Eschasseurs, a game in which men on stilts fight each other and try to knock their opponent down. Initially, in the 15th century, the stilts probably were used during the flood times to cross the river Meuse. Today the tradition is taken very seriously, and during the Wallonia days, the different teams from the city fight for the golden stilt trophy. You can recognise the old town’s team, Melans by their colors, black and yellow.

While I visited Namur I had the chance to attend the Folknam, a day dedicated to the folklore, with a market, a folk ball and a traditions parade. 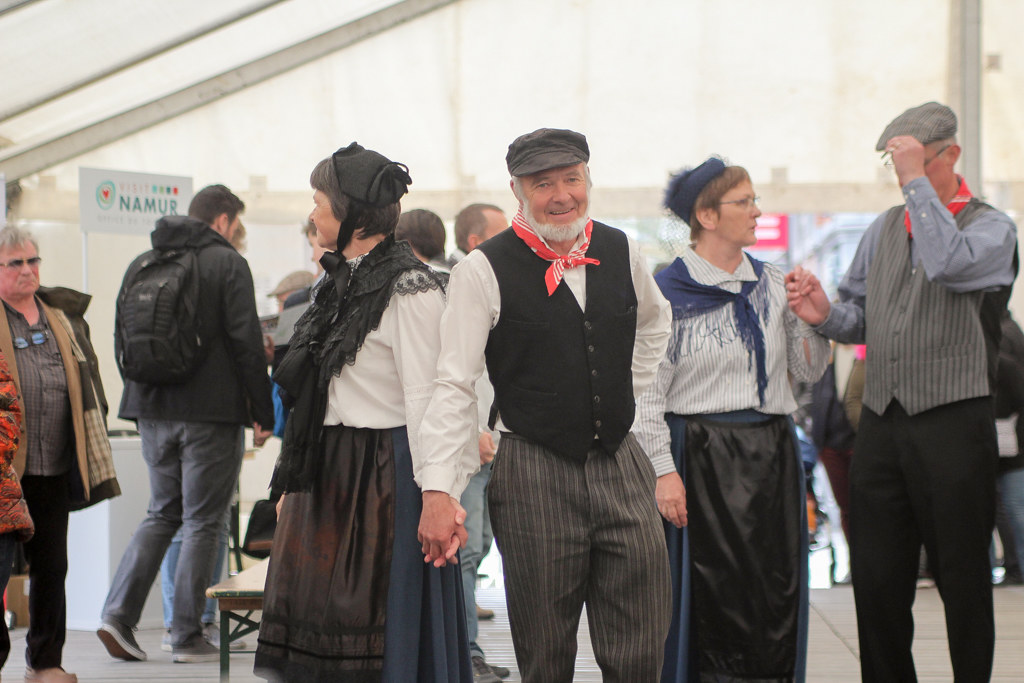 The symbol of Namur is the snail and it refers to the slow pace of life in this city. If you take a stroll to Place d’Armes you will not see a statue of a historical character or of famous people. No, you will see the statue of Joseph and Francois, with their two snails, one of a lead and one caged. 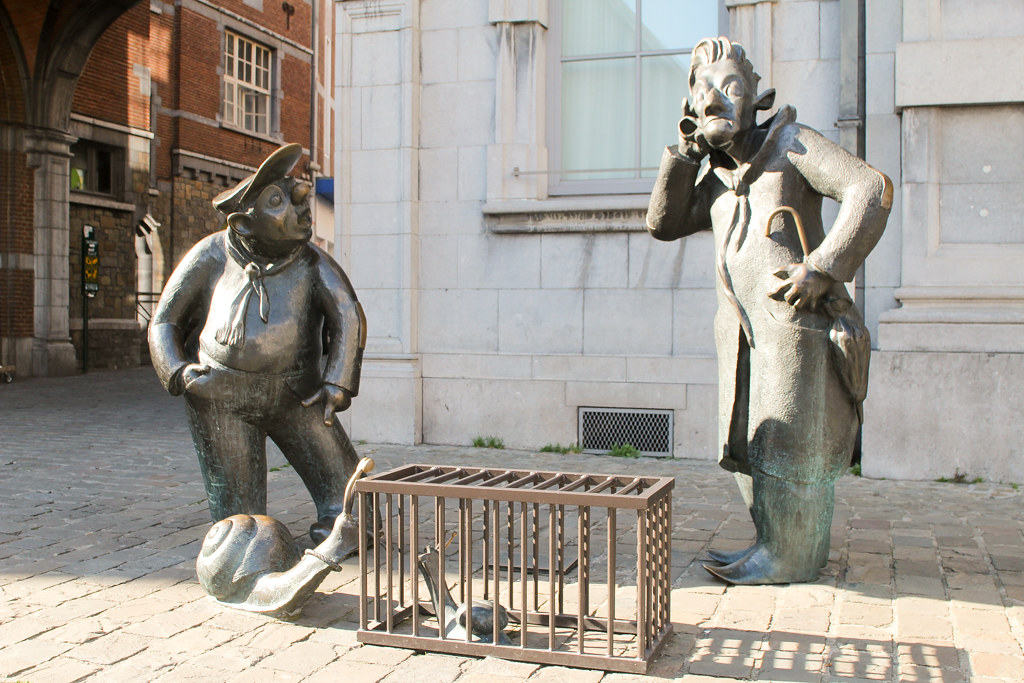 Namur is the perfect place to visit if you want to go slow. Time in Namur seems to pass slowly and I noticed that here I was able to take a break from the fast pace of my own life and just breath.

Disclaimer: This post has been written with the support of the Namur Touristic Office and the Citadel of Namur.

64 thoughts on “Best things to see in Namur”