I don’t know about you, but food is a very important part of my life. And if I think about it, that’s probably the reason why I can’t seem to be able to lose any weight and prepare my “beach body” for summer, no matter how much time I spend at the gym.

I love food! In one word, I am a declared foodie and I can never say no to an invitation of trying out new restaurants and new cuisines. During my trips around the world I have joined many cooking classes but I never actually taken a food tour. I have however noticed how these kind of tours have recently grow a lot in popularity and the idea of experiencing a food tour of London has been on my mind for quite some time.

Last month, during the Traverse17 conference I was invited to take part in the Twilight Soho Food and Cocktail Tour organised by Eating London Food Tour, in which I got a chance to experience the amazing restaurant scene of London’s most eclectic and vibrant neighborhood.

Soho is the centre of London’s entertainment scene: a multicultural hub with fantastic nightlife, high quality theatre plays and historic music venues (like the Marquee Club or the Trident Studios), upmarket restaurants, British fashion boutiques (on Carnaby Street) but also the heart of the city’s sex industry.

Soho is where the international food scene emerged in London, back in the 19th century, as a result of the Greek and Italian immigration. Today you will find in Soho a mix of exciting cuisines among local foodie spots that are kept secret and that you won’t know about unless someone tells you about them.

With the map on my phone and with plenty of time on my side I still managed to get lost and be late at the meeting point with Ashleigh, our fascinating guide for the evening. We met in front of the Palace Theatre, where currently Harry Potter and the Cursed Child is playing.

In my opinion, a very important part of a tour is the guide and I must confess that I fell in love with Ashleigh’s bubbly personality as soon as I’ve met her. She was brilliant and she kept us entertained for the entire duration of the tour (over 4 hours!). I could easily tell that she had a background in acting by the way she was telling the stories of the places we were passing by, full of enthusiasm and gestures.

The first location of the evening we stopped at was La Bodega Negra, a traditional authentic Mexican street food tavern, with a very questionable but intriguing entrance. The place is divided into a café and a restaurant, one around the corner from the other. The café has an open kitchen and a beautiful large open plan for the tables, with the walls covered in posters and the bar decorated with tequila bottles. 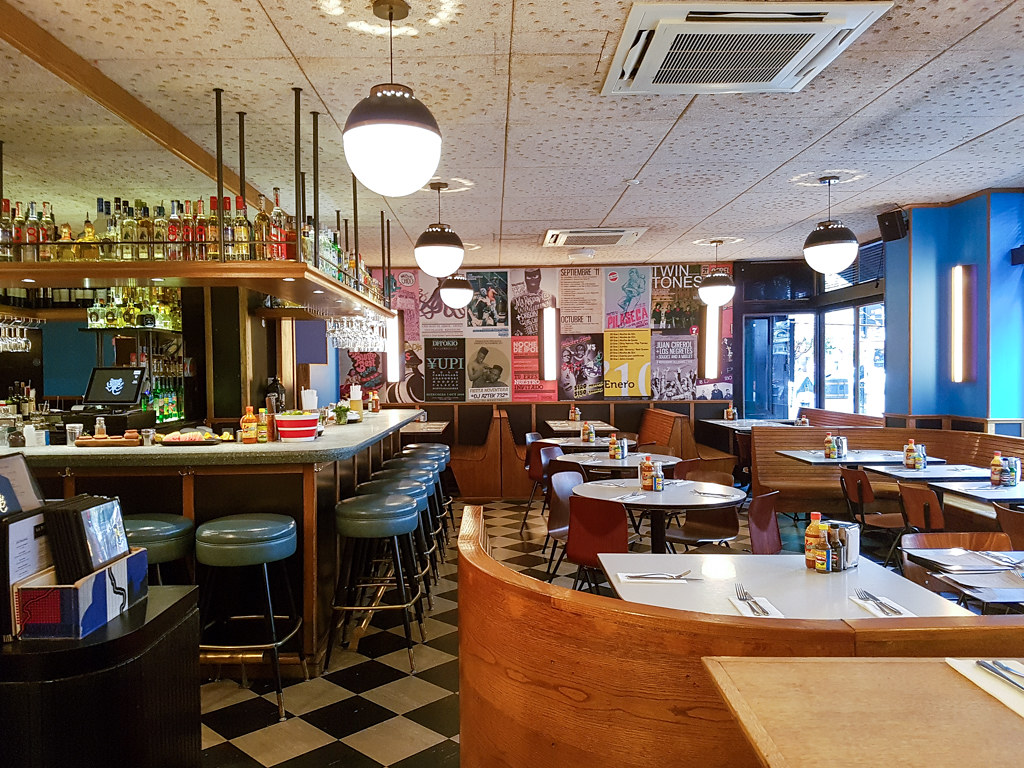 As soon as we sat down at the bar and we were immediately brought a glass of mango frozen margarita and a plate of tacos to taste. I kept looking and admiring the colours and the arrangement on my plate that I missed the description of what I was about to eat. I can tell you that the flavours combined so well from the first bite. I could feel spicy and sweet, with hints of lemon sourness. I could have easily just stay there and eat tacos for the entire night but our next surprise location was waiting for us. 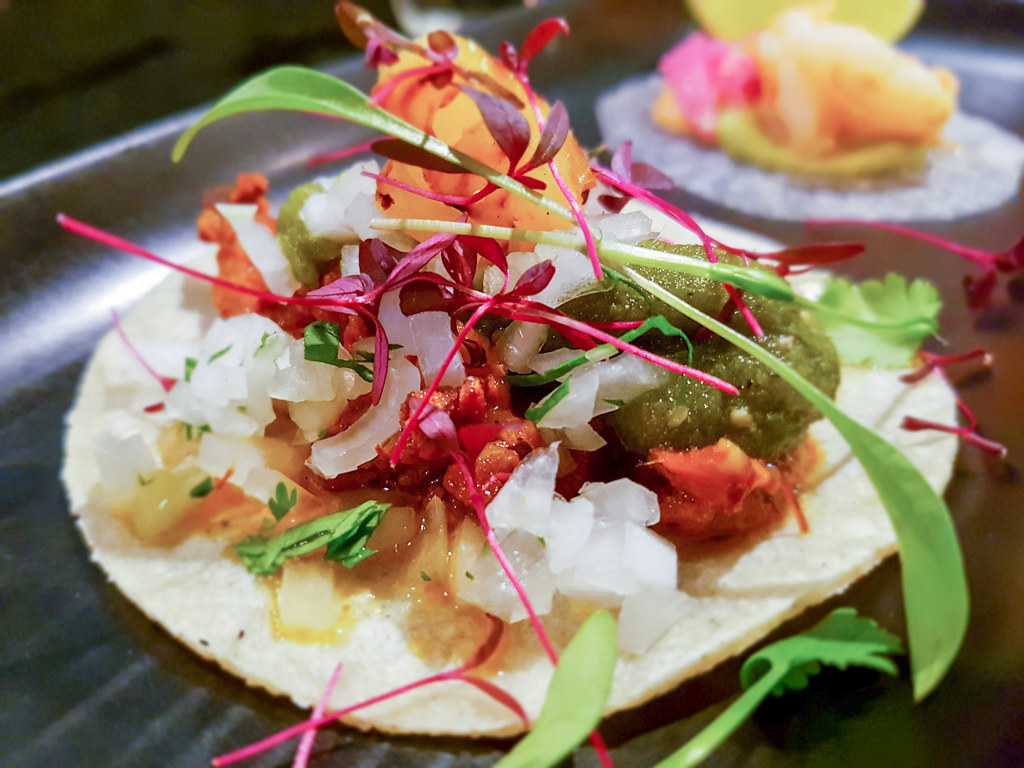 Now if you know me you will know that since I have visited the Bombay Sapphire Distillery last December, where I also attended a lesson into gin tasting, I have started to enjoy drinking and preparing G&Ts. So you can imagine my excitement when I’ve seen the “Gin, No Gin sign” in front of a restaurant and found out that we were going inside. 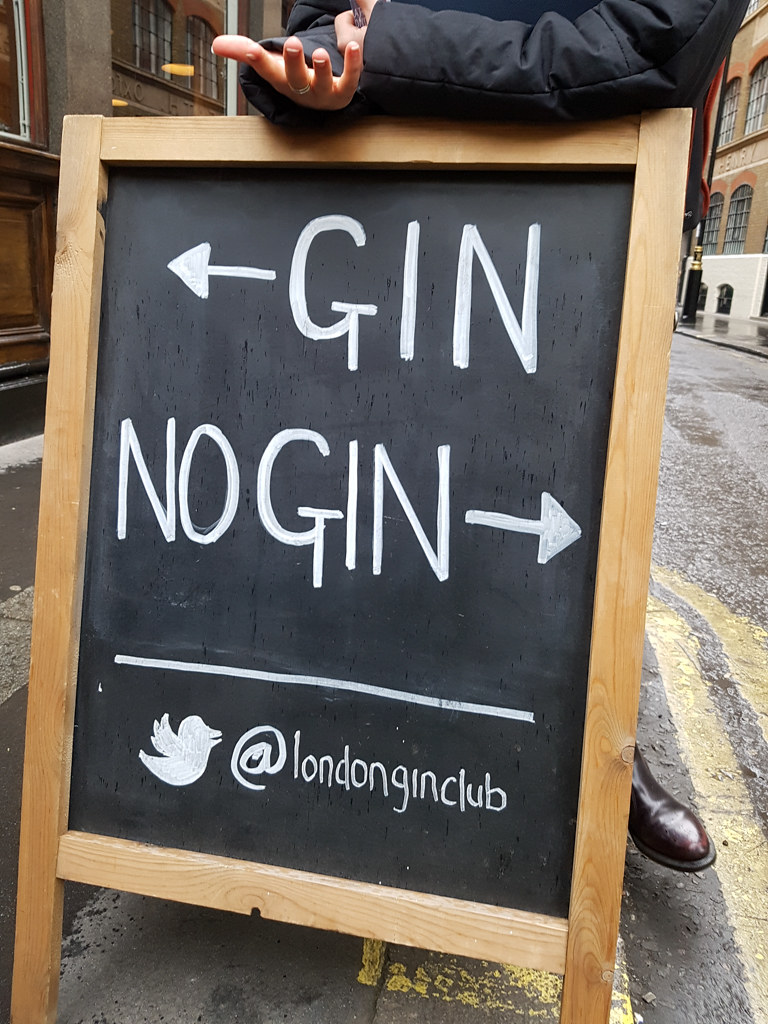 The Gin Club offers over 210 different types of gin and no other type of alcohol. It is a friendly relaxed place, with wooden tables and an impressive bar full of gin bottles. The gin we tasted was the own creation of Julia, the owner of the Gin Club. The gin came in tiny bottles that we poured on top of cracked ice and garnish with an olive. As the waiter explained to us, we only had to pour a little bit of the tonic on top and not the entire bottle, in order to taste the full aroma of the gin. 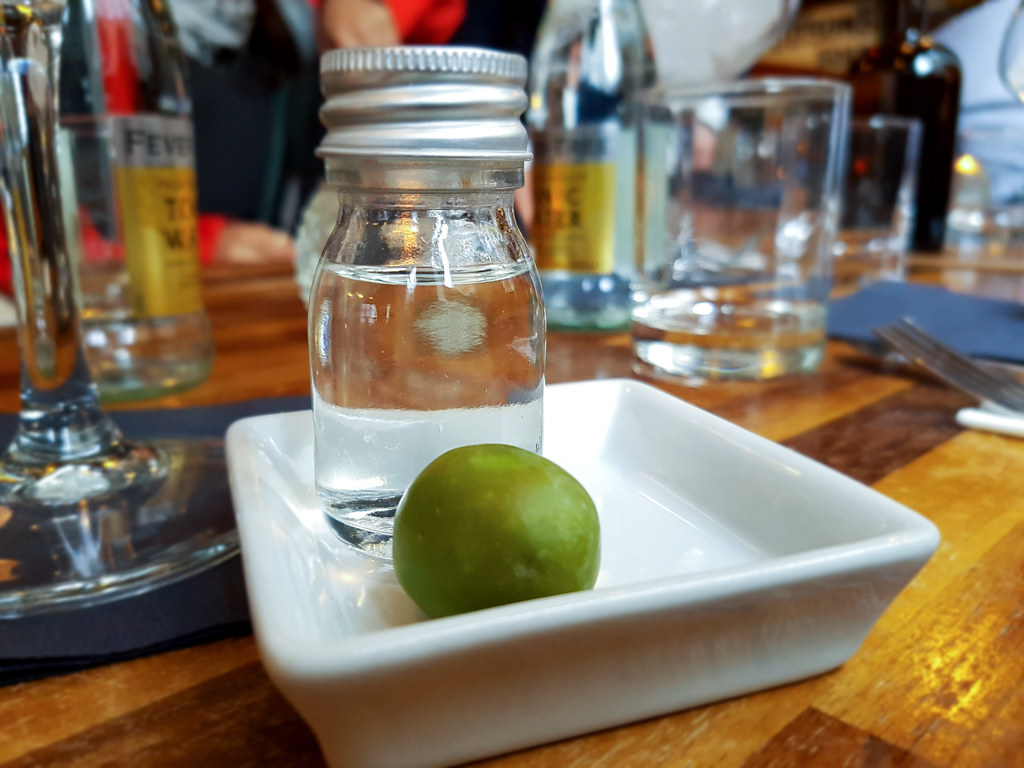 The G&T was paired (it’s usually the other way around but here the gin is the main character) with what else than a gin-infused pie? 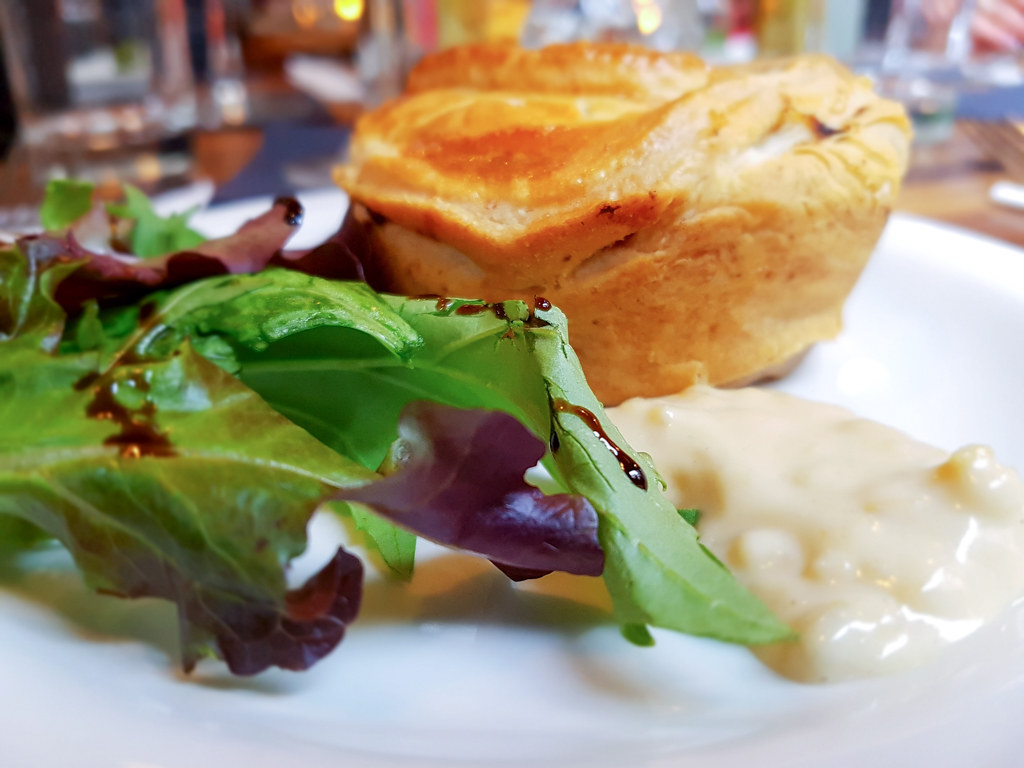 Next time I will be in London I will definitely go back and try some of their personalised gin and tonics.

When we arrived at our third stop of this fantastic London food tour I thought we entered a meat shop. The aged jamon legs on the walls, the little cones filled with chorizo and manchego cheese, the fresh baguettes on the counter, they all made me believe it.  But as we made our way through the shelves full of meat, I spotted a couple of tables in the back. One of them was arranged for us, with plates of jamon and cheese, and glasses of rioja wine, waiting to be tasted. 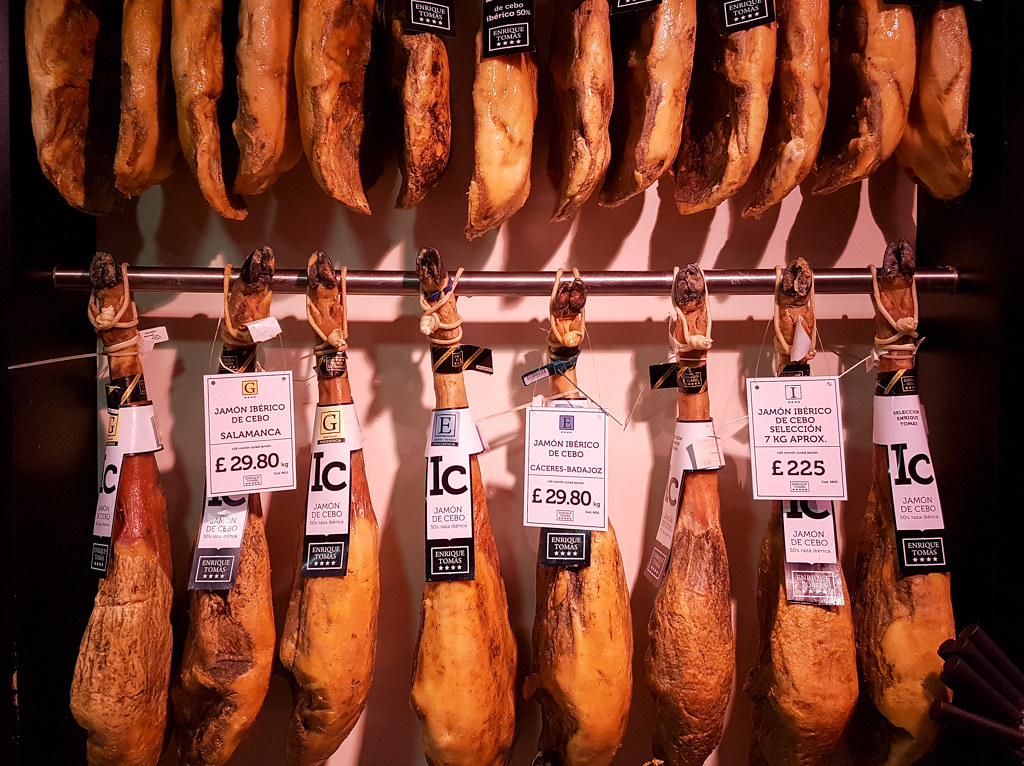 Before attending this jamon tasting experience I had no idea that there is a difference between this typical Spanish type of ham and I could not explain the gap between the prices. Now I know that there are three types of jamon: Iberico, Iberico Cebo de Campo and Iberico de Bellota. The last one is the highest quality one, coming from free range black pigs fed with acorns. 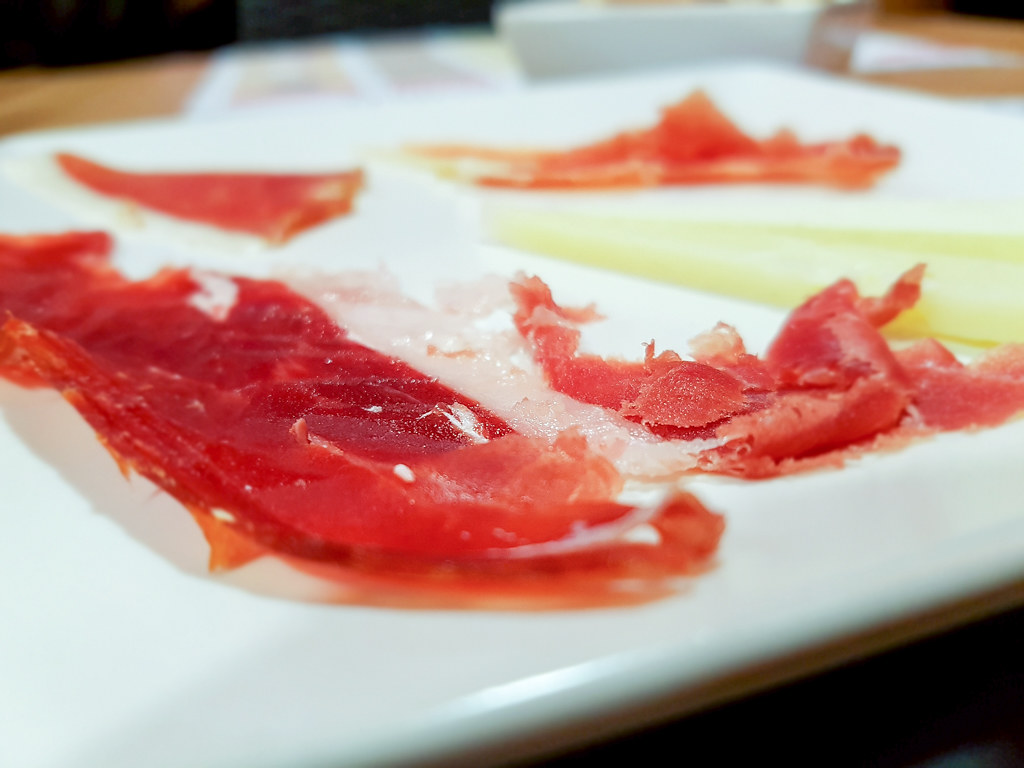 If you want to learn more about jamon you can actually buy here a tasting book which includes information about the Spanish ham but also a selection of about 500 grams of knife carved meat. Now that’s what I call a gift for a foodie! 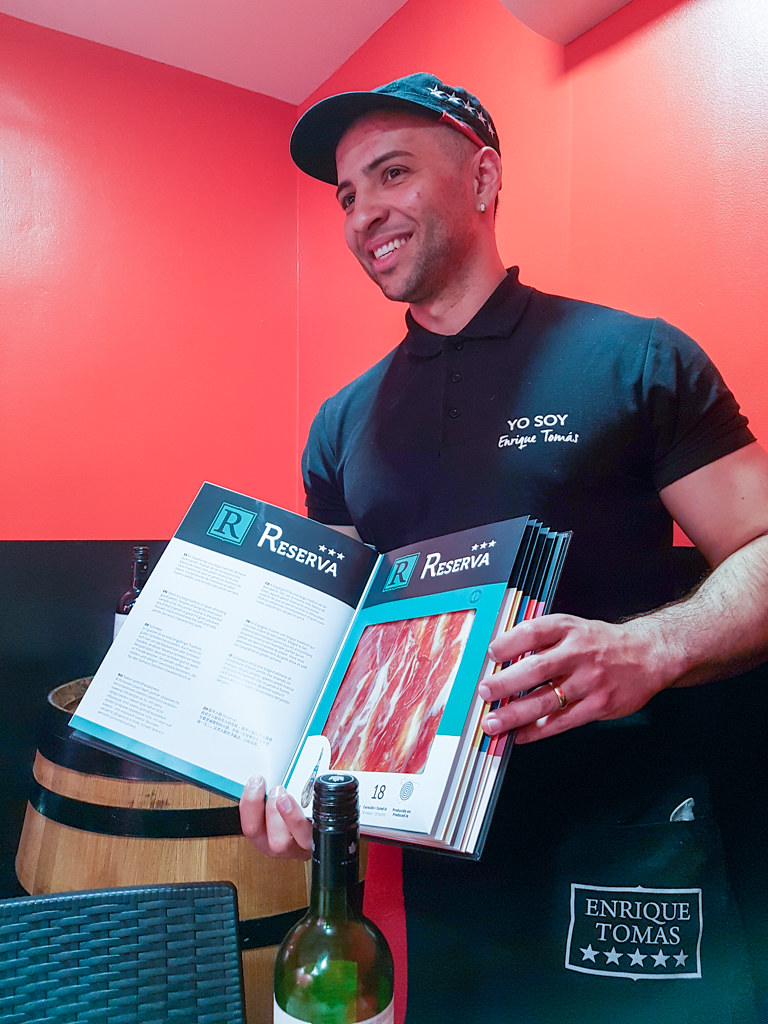 After tasting an outstanding selection of jamon, where else could the tour continue but to a tapas bar? Pintxos are a typical bar snacks from the Basque country in Spain hold together with toothpicks and served with a typical dry white wine called “Txakoli”. 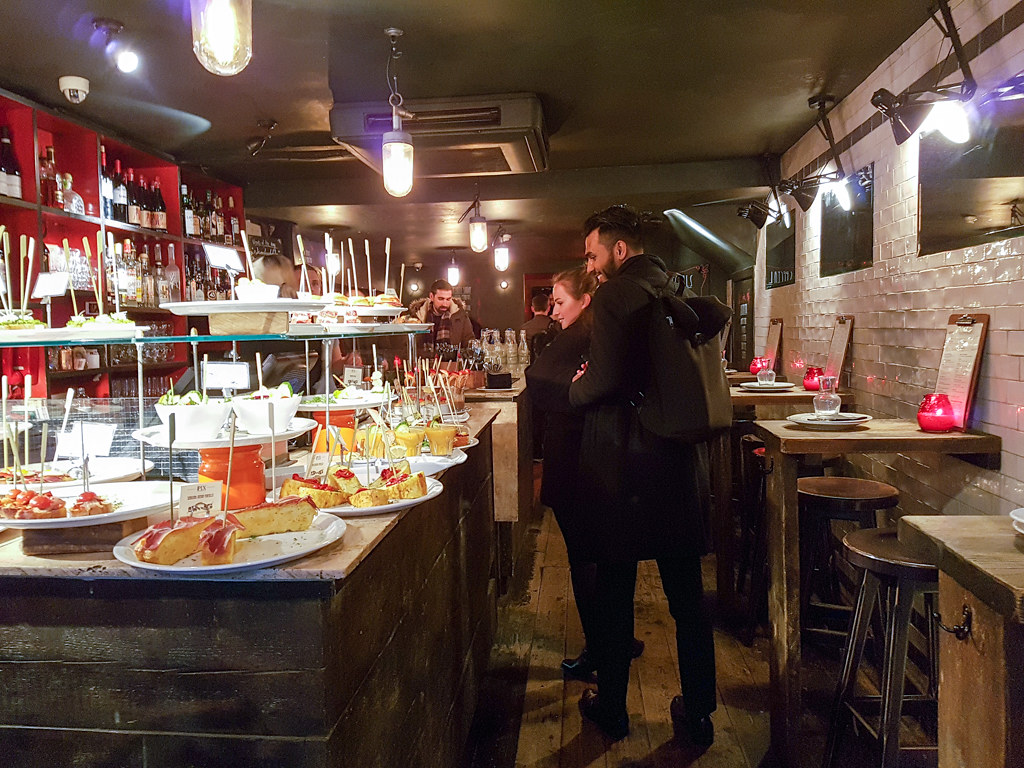 The restaurant was small but full of character, with a bar stocked with plenty of different types of pintxos, both savoury and sweet. We simply picked up a plate and filled it with what we liked best from the counter. Meanwhile, at our table, a waiter was demonstrating how Txakoli is poured into glasses, from a very high distance. 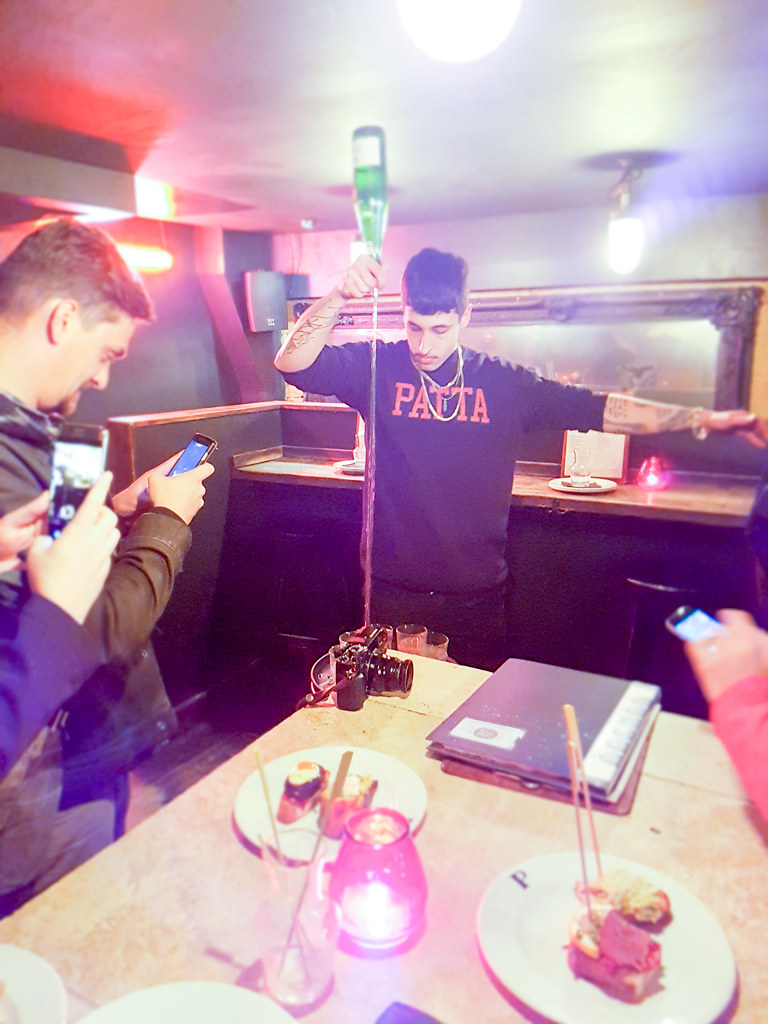 The food was delicious and I imagined how this bar would be the perfect place to come for a drink and a snack after work because of its relaxed atmosphere. I would have loved to try some more items from the menu but we still had two places to go. I had no idea what cuisines would follow, which to me, was very intriguing. 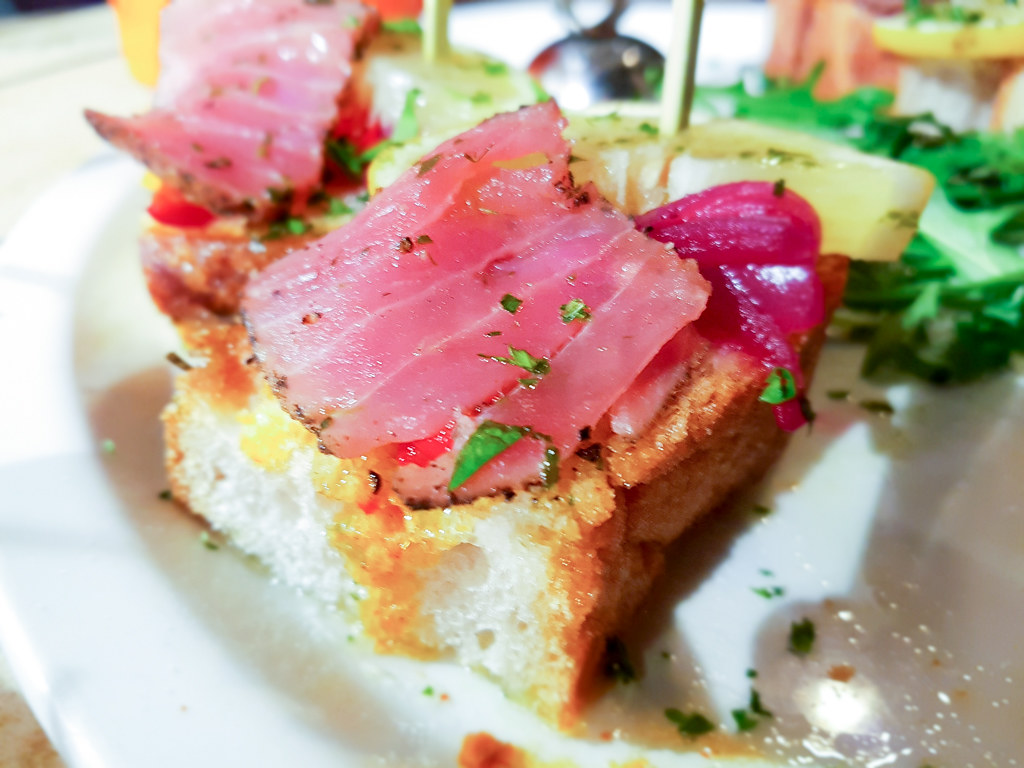 Before I start telling you about the fascinating experience at Opium, I have a question for you: have you ever tried… no, have you ever imagined a tea cocktail, poured from a traditional Chinese tea pot by your table neighbour, as tradition says you can’t do it yourself? 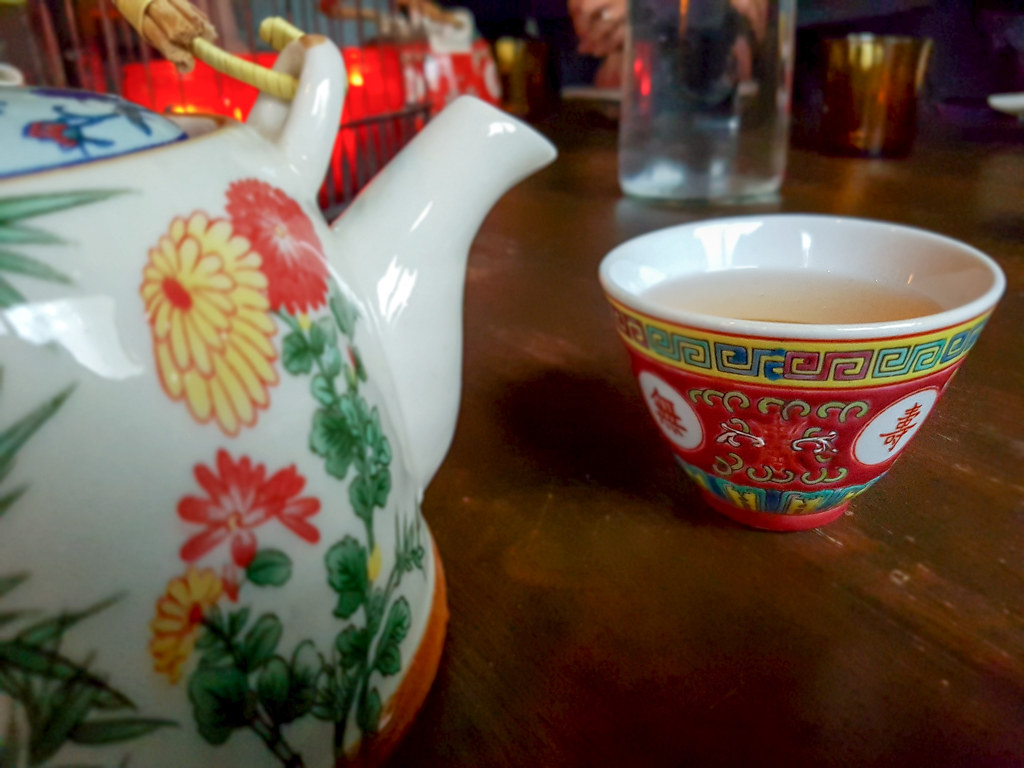 Soho is also the home of London’s Chinatown and of course that our food tour wouldn’t have missed the opportunity to take us to a traditional dim sum restaurant. But not any dim sum restaurant! Opium is sign posted with a very small plaque next to a simple door to which you need to knock to get in. A friendly “giant” porter greeted us with a smile on his face and welcomed us inside. After climbing four flights of stairs we entered this beautiful decorated room, with red leather armchairs, candles on the tables and green walls with family photos hanged on them. Were we in a restaurant or in someone’s house? 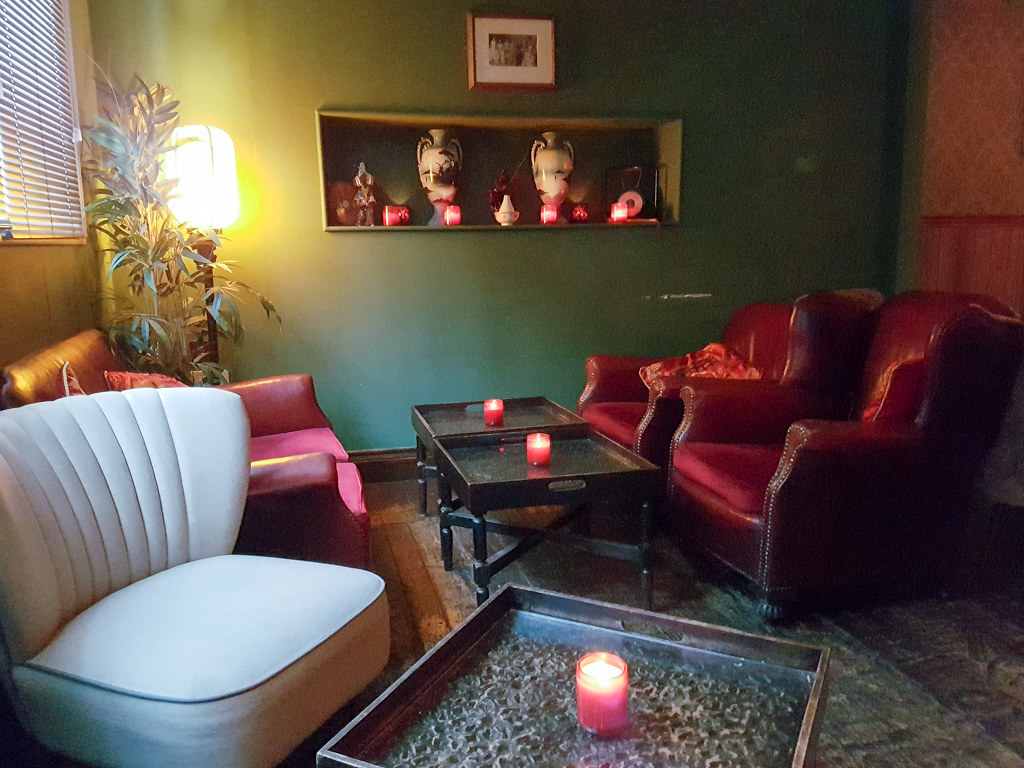 As soon as we sat down we were immediately brought tea pots filled with tea based cocktails, a signature drink of the restaurant. For good luck, you should always ask the person next to you to pour the drink in your cup and never do it yourself. 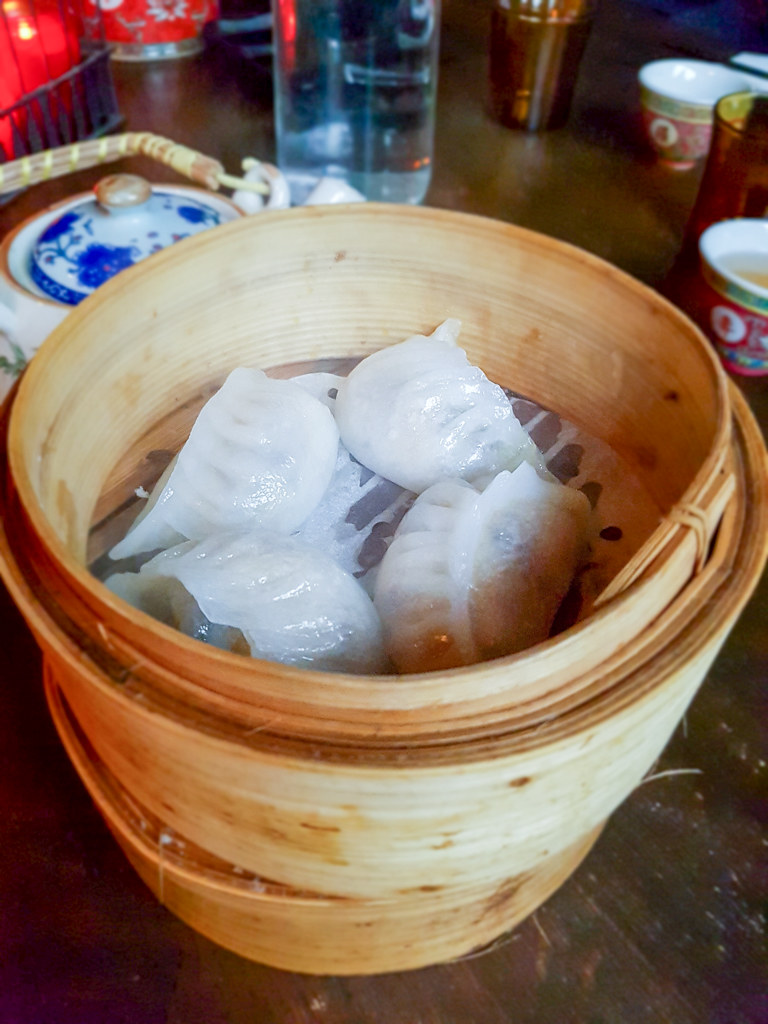 Soon the food arrived as well, in little bamboo baskets which reminded me of the dim sum I used to have for breakfast when I visited China, from the old woman at the corner of the street in Yangshuo. I was so excited to taste the dumplings, and dip them in the three soy based sauces. We had a selection or pork & prawn and mushroom & truffle dumplings and I can’t choose a favourite out of the two.

We arrived at the last location of the evening after taking a shortcut through Soho’s “dark alleys”, where the sex shops and massage parlours are advertised as legit businesses. We passed by the legendary Madame Jojo’s nightclub, an icon of Soho which was forced closed by the authorities a few years ago. If you want to know more about the history of this famous club I suggest you watching“ The Look of Love”, a movie made in 2013 picturing the life of Paul Raymond, the 60’s baron of Soho and owner of Madame Jojo’s.

But to continue our culinary journey, we found ourselves in front of a red door which could have easily be the entrance to someone’s private home. But behind the door, downstairs, a new world of sweets and cocktails opened to us. The bar was very lively, dark – which gave it a mysterious vibe, with exposed brick walls, private booths dressed in dark wood and comfy leather couches. Basement State is London’s first dessert bar which brings to the town a little bit of the Parisian chic through the focus on the details on each plate. 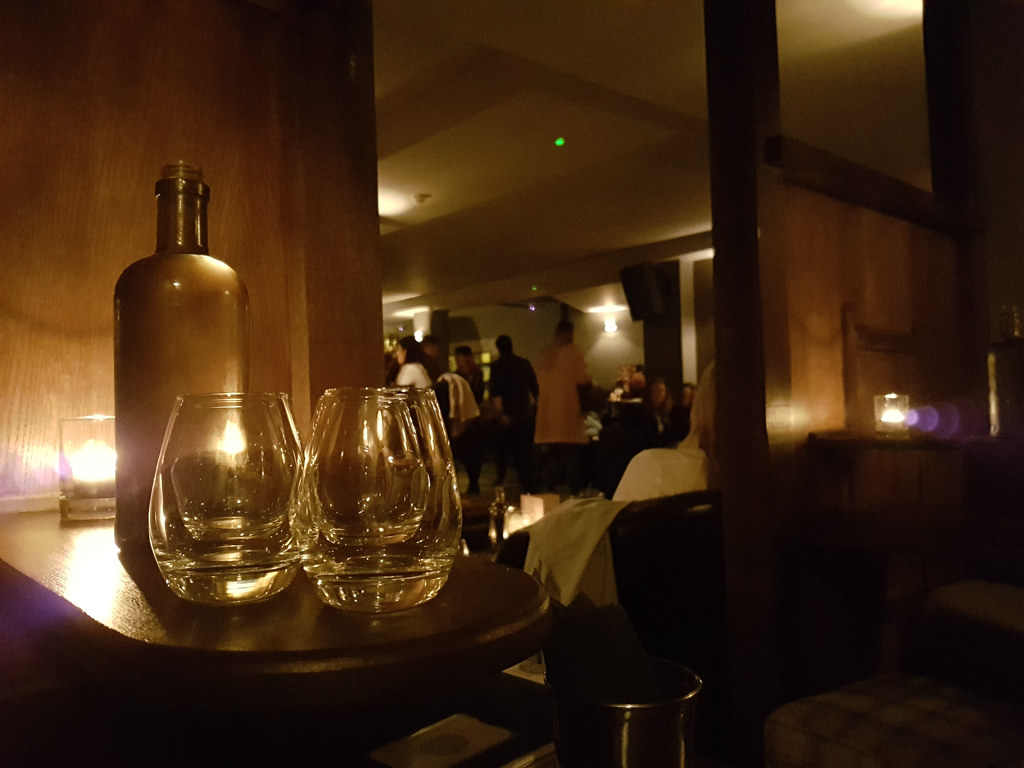 I do not know what kind of cocktail we were served but I do remember how delicious it was. To me, it tasted a bit like a combination between pisco sour and passion fruit. The dessert followed soon: a chocolate sphere sat on a piece of brownie, filled with decadent chocolate mouse and decorated with edible gold foil – just a broad description. There was a lot going on the plate, with tiny details that combined created the perfect rich chocolate experience. The presentation of the dessert was so beautiful and it looked like so much effort has been put into creating it that I felt sorry destroying it with my tablespoon.

With our stomachs full and after an evening full of fun and entertainment the moment came to say thank you and good bye to lovely Ashleigh. It was an amazing food tour of London, much longer than I expected and because the group was very small we got to know each other quite quick and socialise much better.

If you want to book the Twilight Soho Food and Cocktail Tour (£94) or check out the other three foodie tours Eating London Food Tour offers in London, check out their website. I would love to try next their Brick Lane Flavours of India food tour (£46), knowing that Shoreditch is the home of some of the best curry houses in town.

Disclaimer: Please note that I was invited to take part in this tour as part of Traverse17 and it was included in the ticket I bought for the conference.