As my new year’s resolution was to spend more time walking outdoors, I spent the first day of January discovering Rottingdean, a charming historical village on the southern coast of England. Little did I know that there are so many interesting things to do in Rottingdean as well as enjoying long strolls on the coastal path.

Nestled between the cliffs and without access to the inland until the 19th century, when the coast roads from Brighton improved, Rottingdean has been an isolated farming community for centuries. The village was developed around a small pond in Saxon times when the Lord of Lewes, William de Warenne was given a piece of land as a reward for his support during the battle of the Hastings.

Many well-known artists and writers chose to settle down in Rottingdean because it was so peaceful.  One of its most famous residents was Rudyard Kipling, who lived here between 1897 and 1902.

Because of its isolated location and easy access to the sea, Rottingdean flourished in the 19th century as the perfect place for smugglers to bring in contraband goods such as alcohol, tea and lace, which were hidden all over the village, including the church. Rudyard Kipling romanticized this era in his poem “A smuggler’s song”, which you can read here. It is said that the most notorious smuggler in the village was the butcher himself.

How to Get to Rottingdean

Rottingdean is easily accessible from both London and Brighton, either by car or public transport. By car from Central London, it takes around one and a half hours to reach Rottingdean. From Brighton, it’s only a 12-minute car ride.

There are regular trains that leave Victoria Station towards Brighton, with a total travelling time of around one hour. From Brighton station there are frequent buses (12, 12A, 12X, 13X, 14, 14A, 27) to Rottingdean, that reach the village in less than half an hour.

Where to Park in Rottingdean 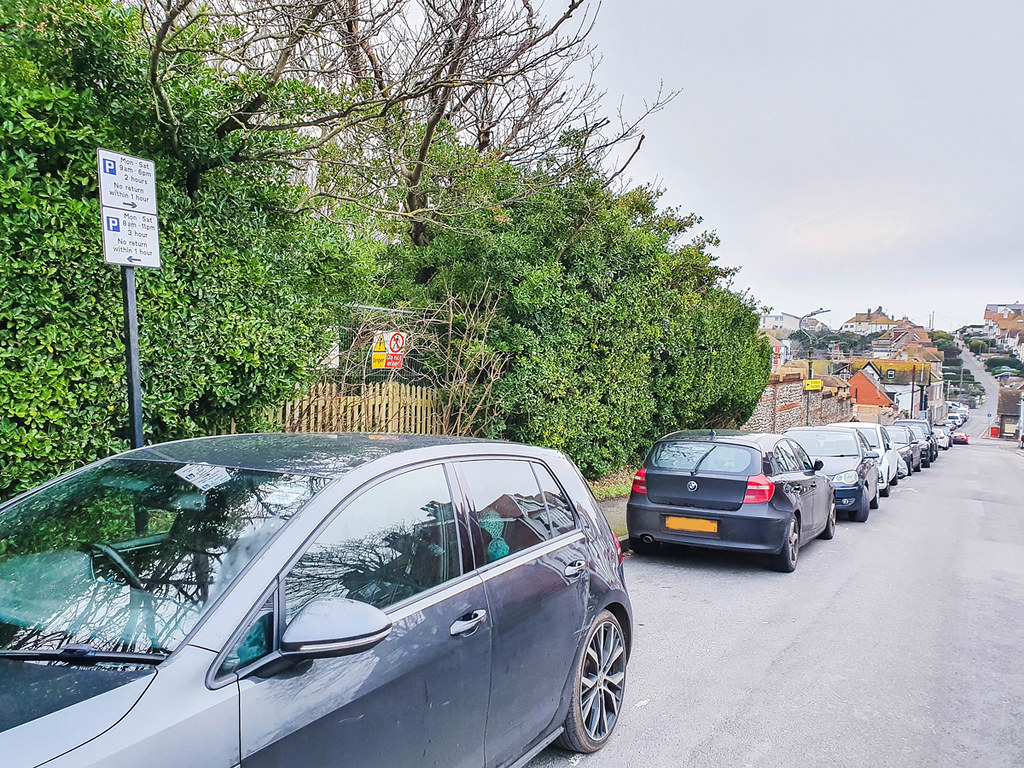 The Best Things to do in Rottingdean 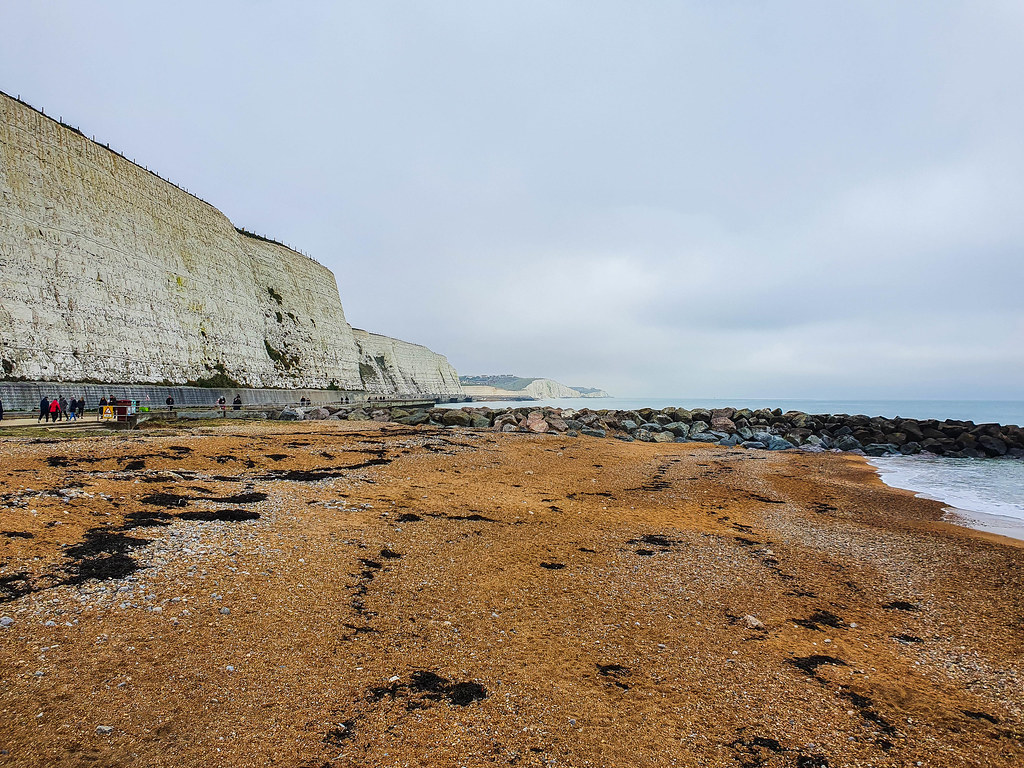 The beach in Rottingdean is pebbled, backed by high white cliffs. When the tide is low, there are quite a few rock pools where children like to explore and look for crabs or sea anemones.

The Rottingdean beach is not suitable for sunbathing due to the large size of the pebbles, unless you bring your own deck chair. During the summer months, lifeguards patrol Rottingdean beach.

The Undercliff Path, which runs along the cliffs, also features a sports area where visitors can enjoy ball sports. 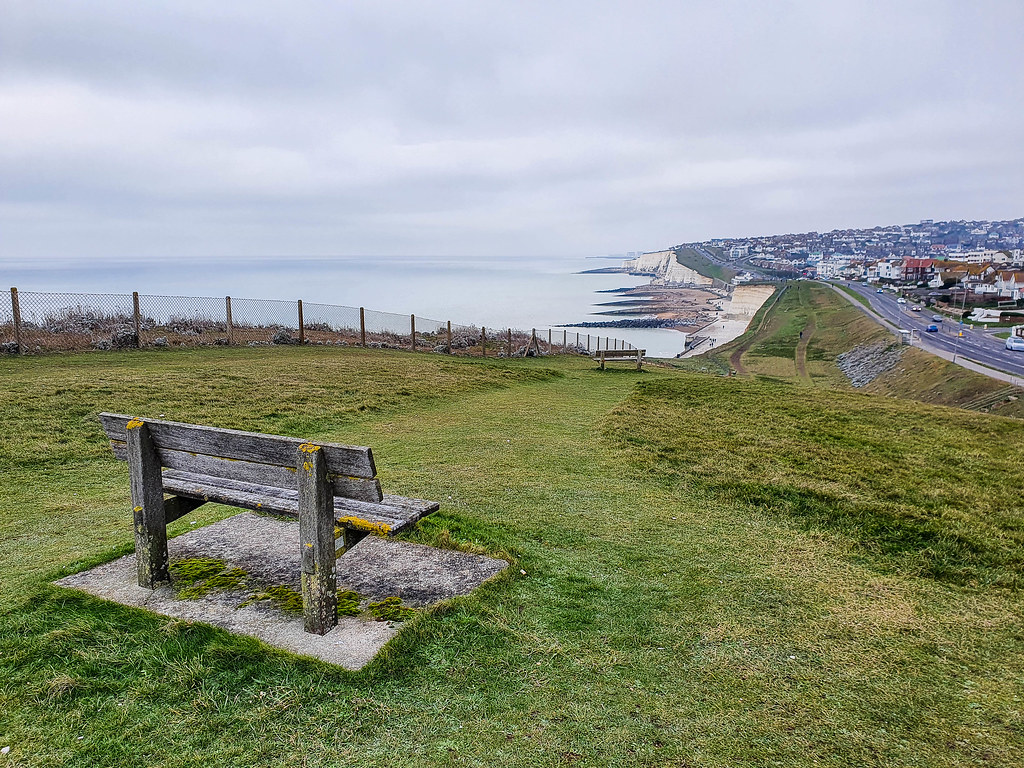 There are two ways to Saltdean: the Undercliff Path and the Overcliff Trail. I recommend following one of them to Saltdean, and the other one on the way back, so that you don’t miss any of the stunning views from both below and above the cliffs.

Once in Saltdean, continue to walk up the first cliff, which is the highest in this area. From the top you will be able to see all the way into Brighton, and on a clear day, even spot its famous attraction, the i360 Observation Tower.

The over cliff trail is a very peaceful walk, with fewer people than the flat Undercliff Path. However, it is a bit more challenging, as the terrain is uneven and the gradient is quite steep. However, there is a nearby pathway, as the trail runs parallel to the main road, but it’s not as tranquil due to the traffic noises.

Enjoy Brunch on the Beach 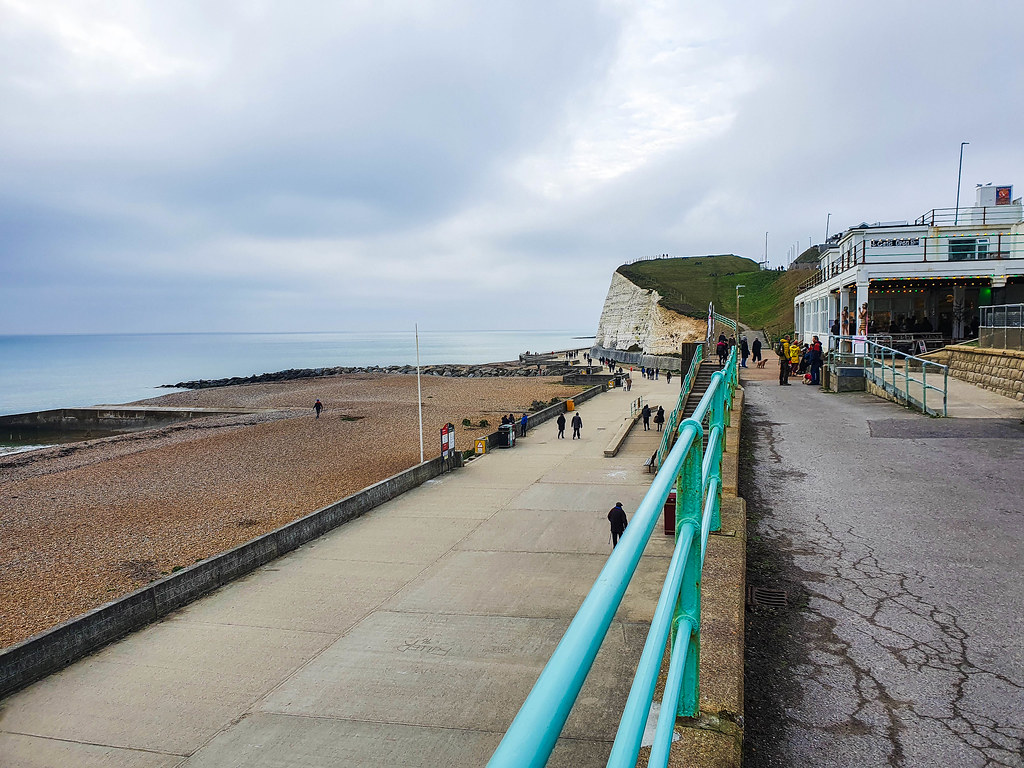 There are a few places around Rottingdean seafront from where you can buy a takeaway meal to enjoy on the beach.

Molly’s at the beach is a café located on the Undercliff Path which sells hot and cold beverages, sandwiches, small bites and cakes. Seaspray, on High Street, offers hot breakfasts, salads, quiches, and soups. Nearby, Smugglers is the best choice for cheeky fish and chips.

Remember though, after you’ve finished eating, if you can’t find a bin, please take any rubbish away with you, don’t leave it behind. 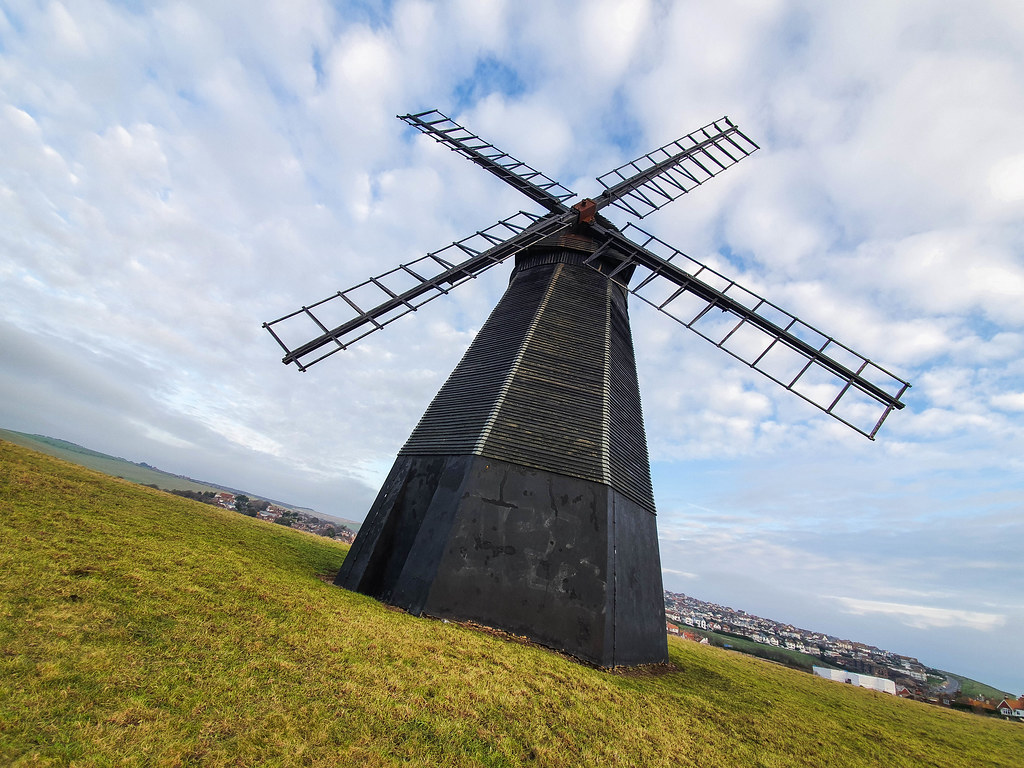 Rottingdean Windmill is one of the most popular attractions in the village. Its existence started with a peculiar story before it was even built in 1802. On its current site, the workmen who were digging the foundation for the future mill found the remains of an ancient warrior, along with his sword. When they returned from their break, both the remains and the sword had disappeared, and haven’t been seen since.

The windmill supplied the village with ground corn and flour until 1881.  It fell into disrepair and was damaged by fire. The grounds near it were used for cricket matches until the First World War.

By 1922, the village realised that they were going to lose the mill, so they had a plan to save it. Different repairs continued over the years, when the mill passed from one council to another, after Rottingdean was absorbed by the Brighton Borough. The years weren’t kind to the mill, which suffered further damage in 1969 by gales and a lightning strike, and agan in 1987 by the Great Storm, which hit with hurricane-force winds.

Today, the Rottingdean Windmill is a Grade 2 listed landmark under continuous maintenance, so that people can still enjoy it. The mill is open to the public on National Mills Day, which is held every year on the second Saturday in May, and on various dates over the summer months. 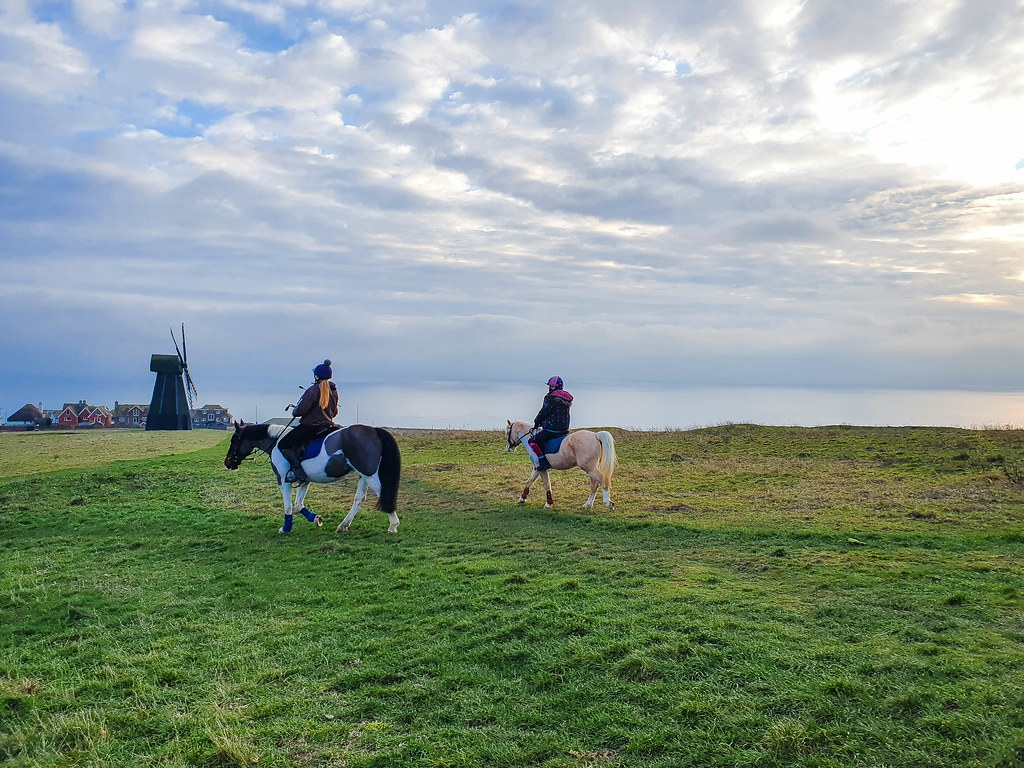 The Rottingdean Mill is located inside the Beacon Hill Local Nature Reserve, a floral rich chalk grassland covering 45 acres. The nature reserve is home to many different species of birds, butterflies, and wild flowers. The soil of Beacon Hill has been grazed by sheep for centuries and, when this stopped, rabbits and hares helped to keep the grass short.

The best time to stroll around the Beacon Hill Local Nature Reserve is the beginning of summer, when the flowers have started to bloom. This is the season when around 18 different species of butterflies come to life and can be seen flying around the flowers and grass.

The resident bird, which can be seen all year round in the reserve, is the skylark. During the year you will also find Goldfinches, Greenfinches, Jays, Magpies and Collard Doves.  Seasonal visitors, including House Martins, Warblers, Swallows and Swifts can be also seen mostly during the summer.

Gaze at the Kipling Gardens 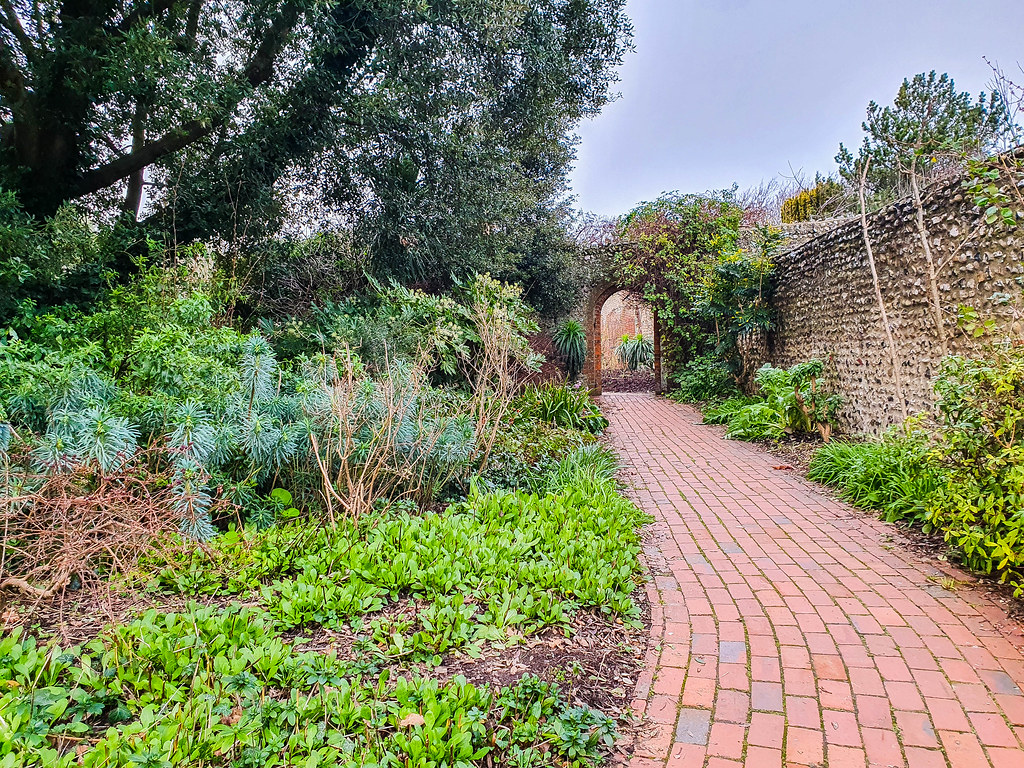 Kipling Gardens is a small, landscaped park which used to be part of the Elms – the house in which Rudyard Kipling lived during his years in Rottingdean. The style of the garden is Victorian, with stone walls separating different areas, such as the Rose Garden or the Herb Garden.

Stepping through the small round arched gate into the Kipling Garden, somehow I felt like I was entering Alice in Wonderland. It is such a pretty sight, small with walls covered in ivy, and arched walkways on top of where you would kind of expect to see Humpty Dumpty, about to sing.

One of the insects that migrates from Southern Europe to Kipling Gardens in summer, is the hummingbird hawk-moth, which can be often seen hoovering above flowers and drinking nectar through their long proboscis.

A resident bird in Kipling Gardens is the wren, a quite vocal little fellow who loves to sing complex notes, often in pairs.

Admire the Architecture of St. Margaret of Antioch Church 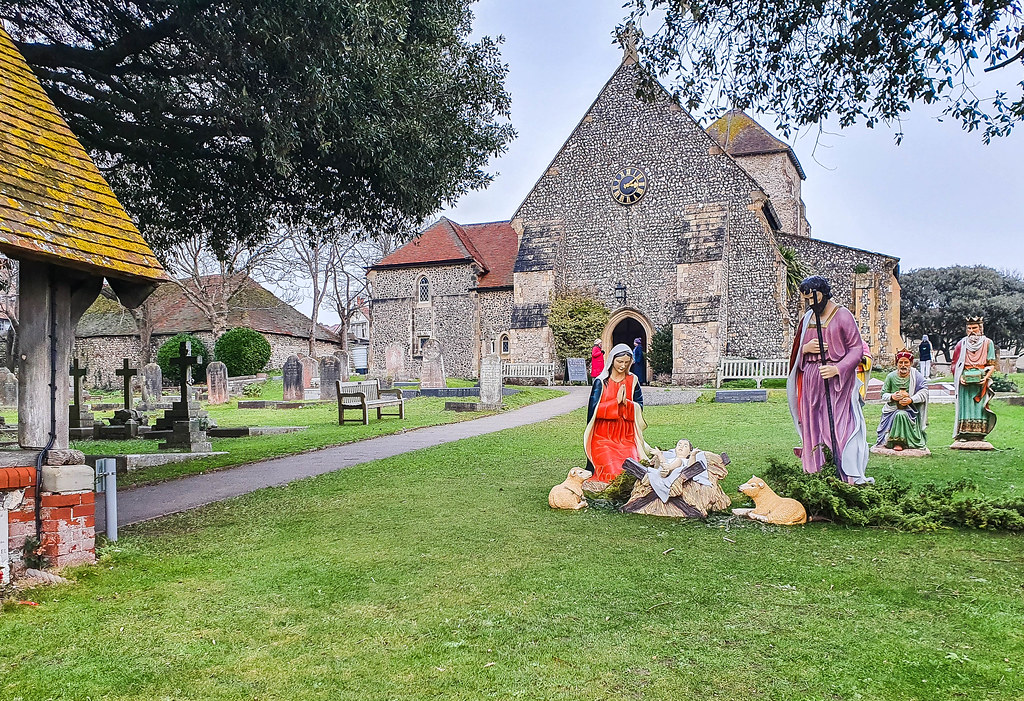 Across the street from Kipling Gardens is St Margaret’s Church, a beautiful architectural structure, built on Saxon foundations in a Normal and Early English style, with added Victorian elements. Its seven stained glass windows were designed by Sir Edward Coley Burne-Jones and built by William Morris.

The church, which is believed to be more than 1000 years old, has been through quite a lot during the years. When its tower collapsed during high winds, somewhere around the 1200s, the villagers rebuilt it with four feet thick walls flanked by strong buttresses, and they are still standing tall to this day. In 1377 the church was set on fire by pirates who invaded the village. The pink and grey colour of the stonework in the arches and the frames in the windows are witnesses to those atrocities, and the people who died there while seeking refuge from the invaders.

Some of the famous people buried in the St Margaret’s church graveyard are novelist William Black and guitarist Gary Moore.

Find the Ducks at the Green and Pond 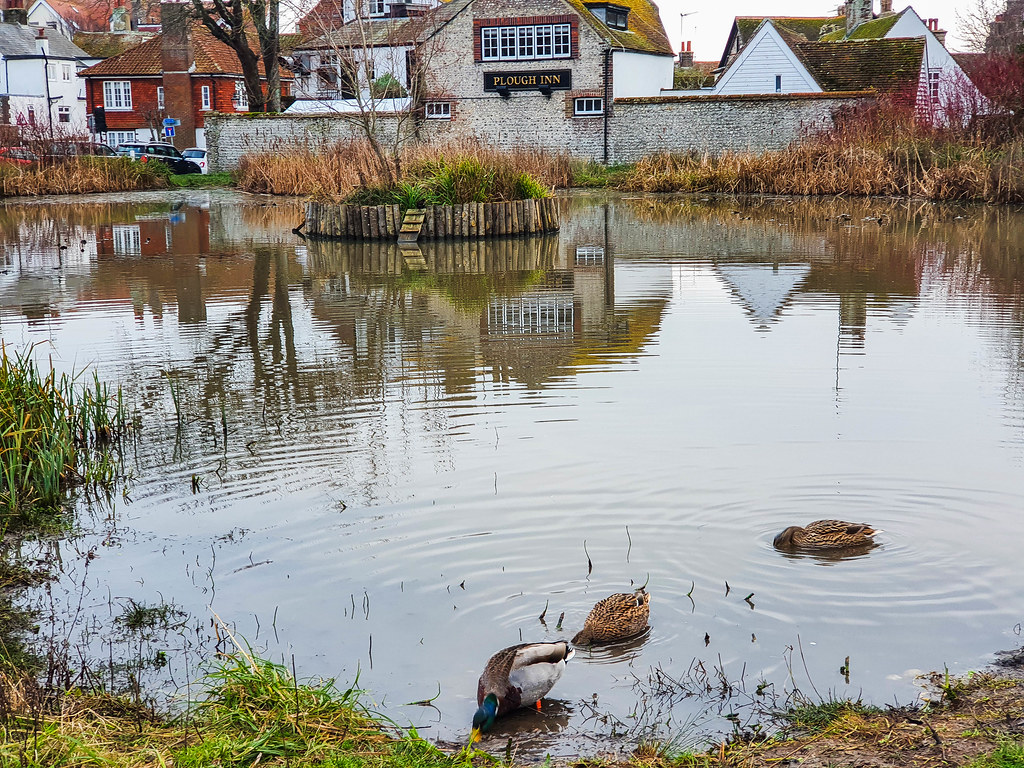 The Green and Pond has been an important place in Rottingdean since the the village was established. Surrounding it is where the first community settled, to later form “the village of Rota’s people” – the meaning of the name Rottingdean.

Now the Green is a small pond, home to ducks and other water loving birds. In the past though, the pond used to be the main source of water for the village, as well as a watering hole for livestock.

Have Lunch or Dinner at the Ye Olde Black Horse 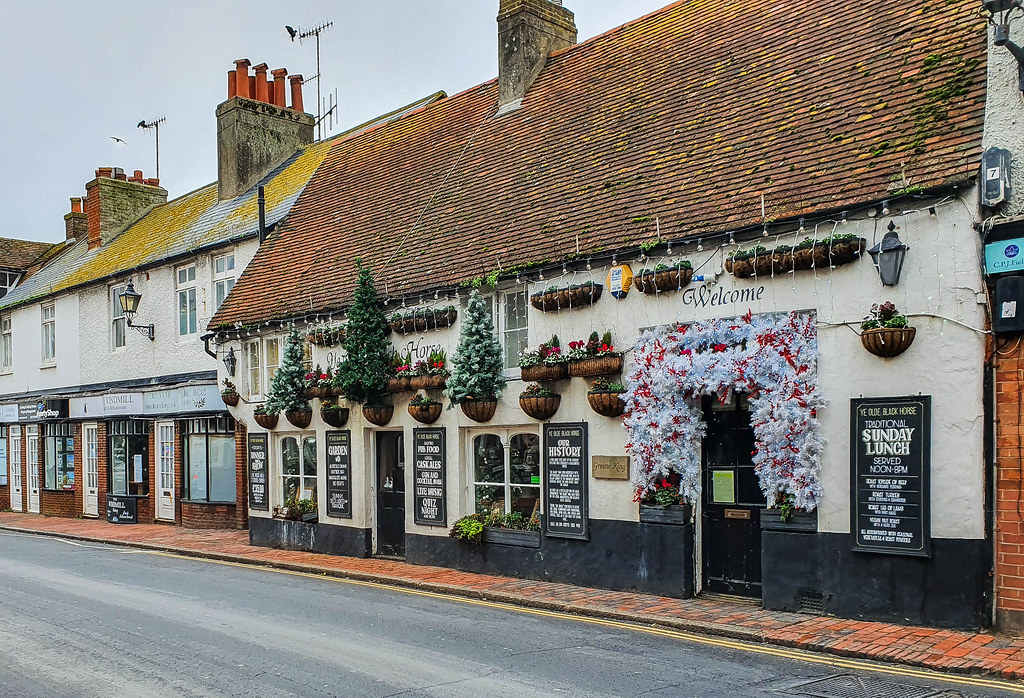 Ye Olde Black Horse has made history in Rottingdean. Known locally as “The Black”, it is the oldest pub in the village, dating back to 1513. It’s where the smugglers used to gather, and this part of its history is well engraved in the pub’s décor, and the network of tunnels which run underneath the high street.

The pub serves home cooked classics such as pies, burgers and fish and chips, as well as fusion dishes such as Asian infused sea bass, tiger prawn masala or lamb tagine, all made using locally sourced ingredients. 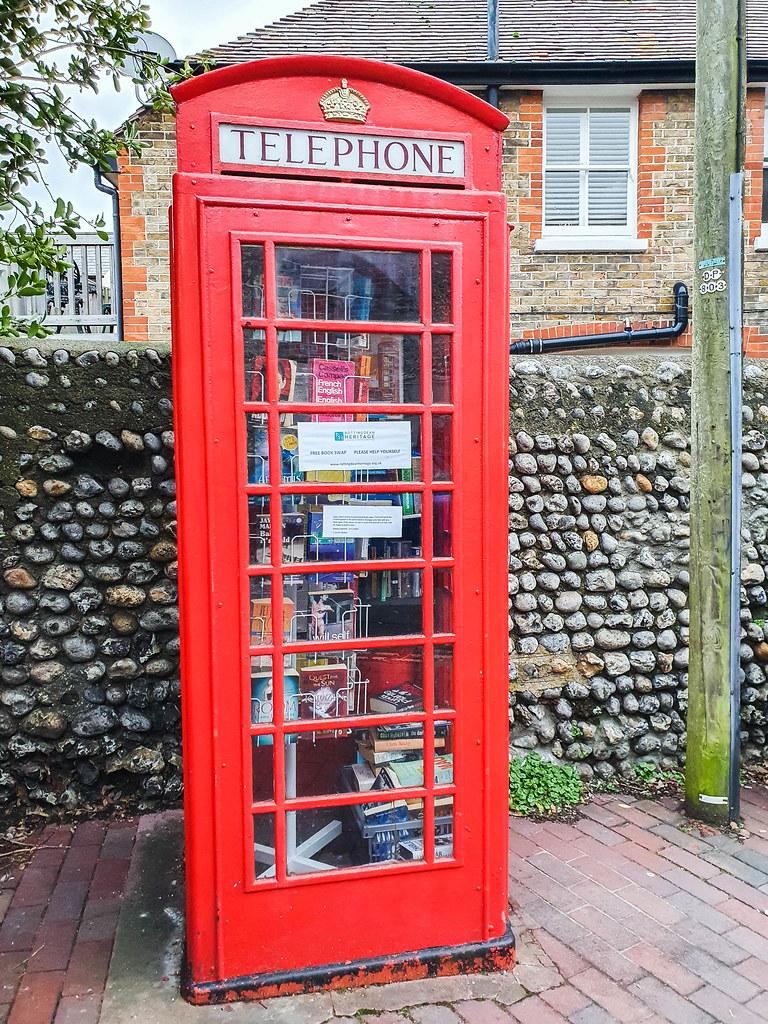 Close to the Plough Inn there is an old red telephone box which has been transformed into a book exchange. This is probably the smallest ever “library” I have ever seen. It’s a great initiative to encourage people to read more.

For such a small village, there are so many amazing things to do in Rottingdean. I will surely return to try and find more of the village’s secrets – as it still has many tales to tell.

13 thoughts on “Things to do in Rottingdean, the charming old smuggler’s village near Brighton”