I fell in love with Trinidad at the first glance, from the moment our bus tuned left at the entrance of the city and continued slowly onto the cobbled streets alongside small colored houses. It didn’t take long until we stopped and get off the bus. A group of locals were waiting for us with big smiles on their faces. Our guide called our names and each of us was assigned to one of the locals. They were our hosts for the next three days. I was assigned in the same casa as the American family: Iris, Steve and Emma, and I was happy that I will have a chance to get to know them better. 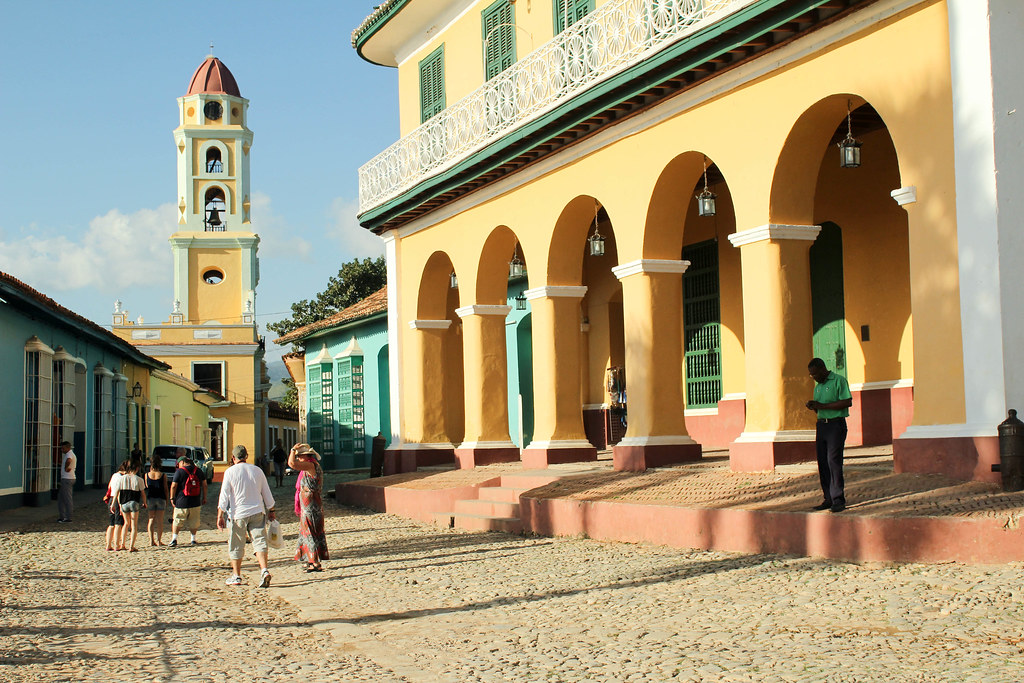 The casa was beautiful. My room was small but clean and arranged with a lot of care. On my bed there were two swans made out of towels. The owner of the casa only spoke basic English but he was very friendly and hospitable. He showed us the small interior terrace on the first floor and then he took us on the rooftop, from where we could see the whole town. 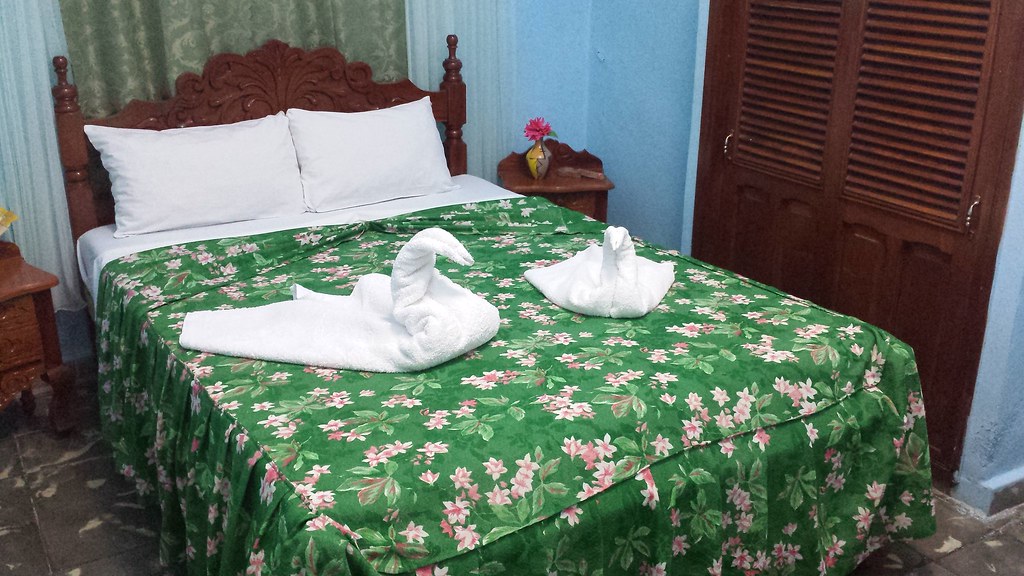 We left our luggage in the casa (well, I can’t say that took too much time for me) and then met Danny, our guide, for a short orientation tour of the city. While we were waiting, in front of one of the houses, the door opened and someone welcomed us in and onto their terrace, which they said it was the highest in the town. We later found out that they were friends with Danny. It was sunset time and the view was lovely, the warm colors of the sky were blending with the orange of the rooftops, over the city surrounded by mountains. I could stay there all evening. 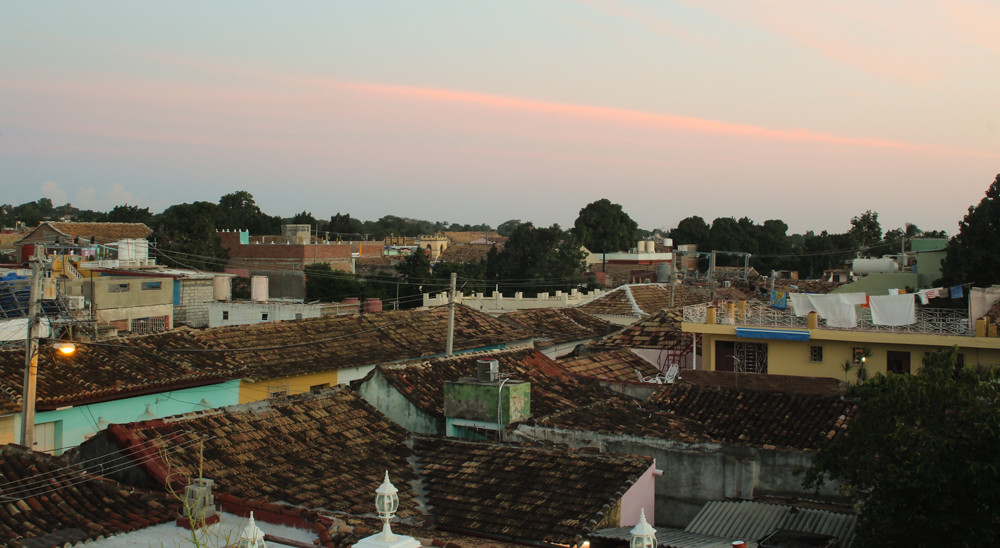 The whole town of Trinidad is on the protected list of Unesco World Heritage since 1988 and if you will visit, you will see why. The colored colonial houses, the cobbled streets, the beautiful churches and piazzas. The atmosphere of the town is very different during the day to the one by night. 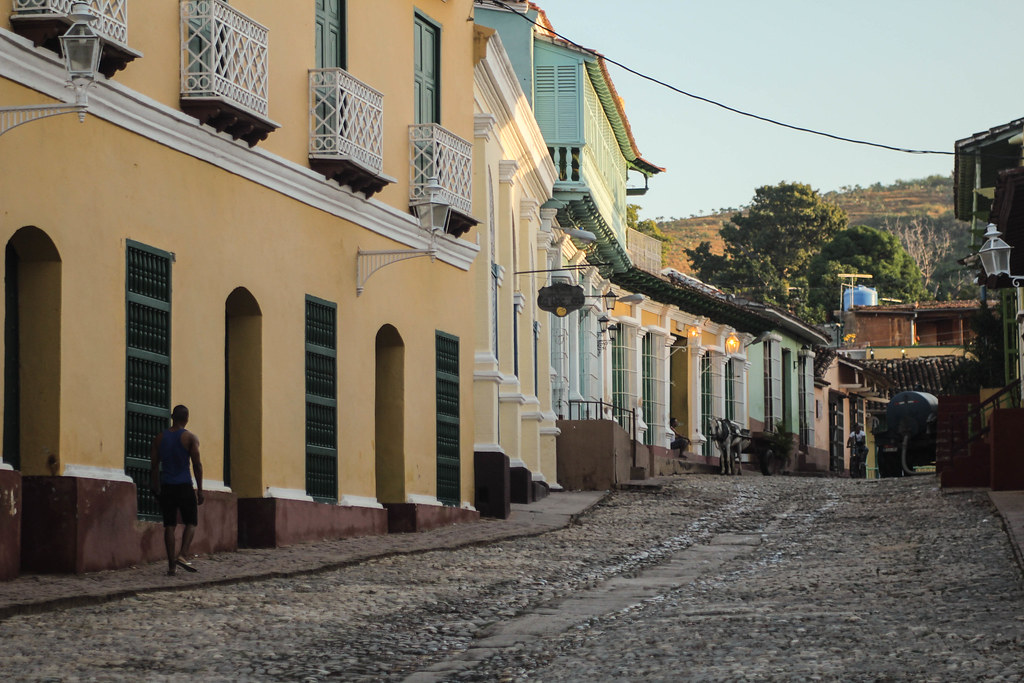 We walked with Danny to Plaza Mayor and then he suggested to go and have dinner a bit early, as we might find seats at a very good restaurant, San Jose. We were lucky and managed to get a table for 10. I chose the chicken in garlic sauce, that came with friend plantains, and which was delicious. 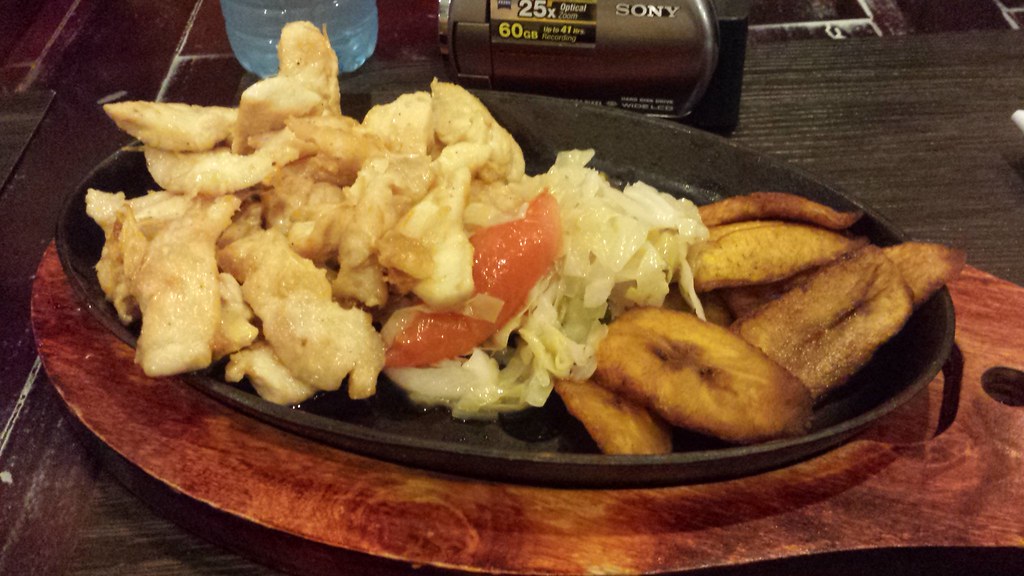 After dinner we went back to Piaza Mayor, to Casa de la Musica. And oh my, what an experience! We paid 1 CUC to enter the steps and then made our way up, very close to the stage. Everybody was sitting down on the steps, enjoying rum cocktails, while on the stage a band was singing. In front of the stage, among Cubans, a few courageous tourists were trying their salsa moves. A whole movie was rewinding in front of my eyes and it was amazing. I have never seen moves like that before, men moving their hips in such a coordinated way, dancing like the world was ending. They were sweating and smiling, dancing so natural, joyful, like they had the music in their veins. I was staring at them (yes, they are also good looking and almost all of them seem like they are hitting the gym every day, with six packs and muscles under their beautiful tanned skin).

The next morning I woke up early again, too early, so I decided to take a stroll before breakfast. The sun was raising and the streets were mostly empty. I firstly strolled to Plaza Carillo, with its green gardens and the imposing Iberostar Hotel occupying an entire side of the square. An old man was watering the plants while a couple of women were sweeping the pavement. Besides them, a stray dog was sleeping under a bench. 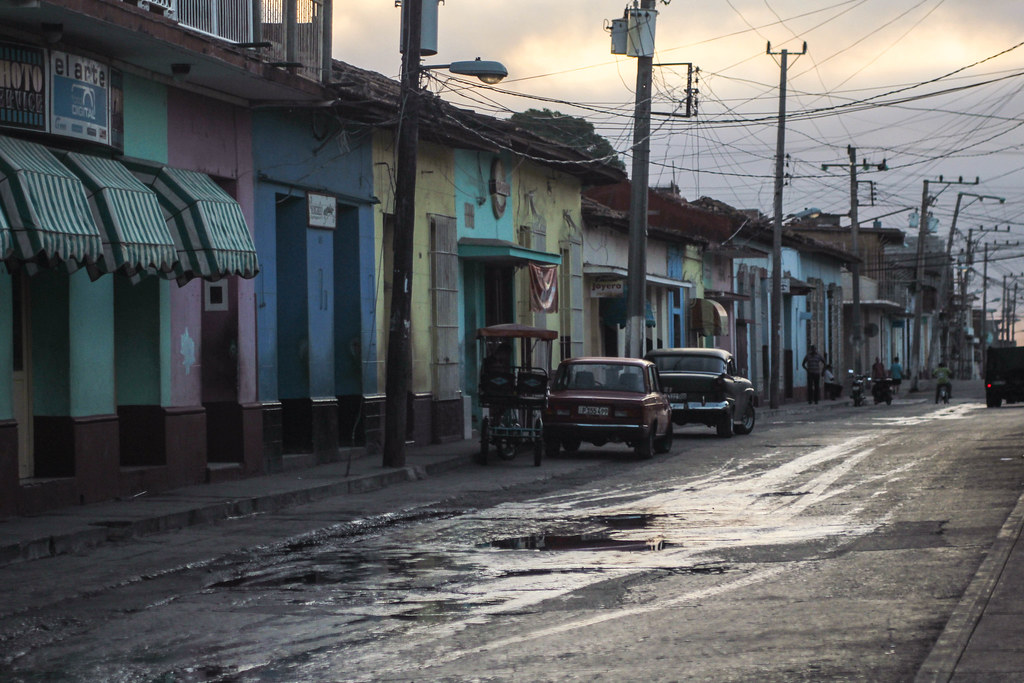 On my way towards Plaza Mayor I met the first children going to school. They were all wearing the same dark red uniform, with their hair hold in a ponytail. This image reminded me of my own school years, after the Romanian revolution, where I was also obliged to wear a blue uniform every day to school. And it also reminded me of my grandmother stories, about how important the school uniform and the hair due were back in the communist regime. 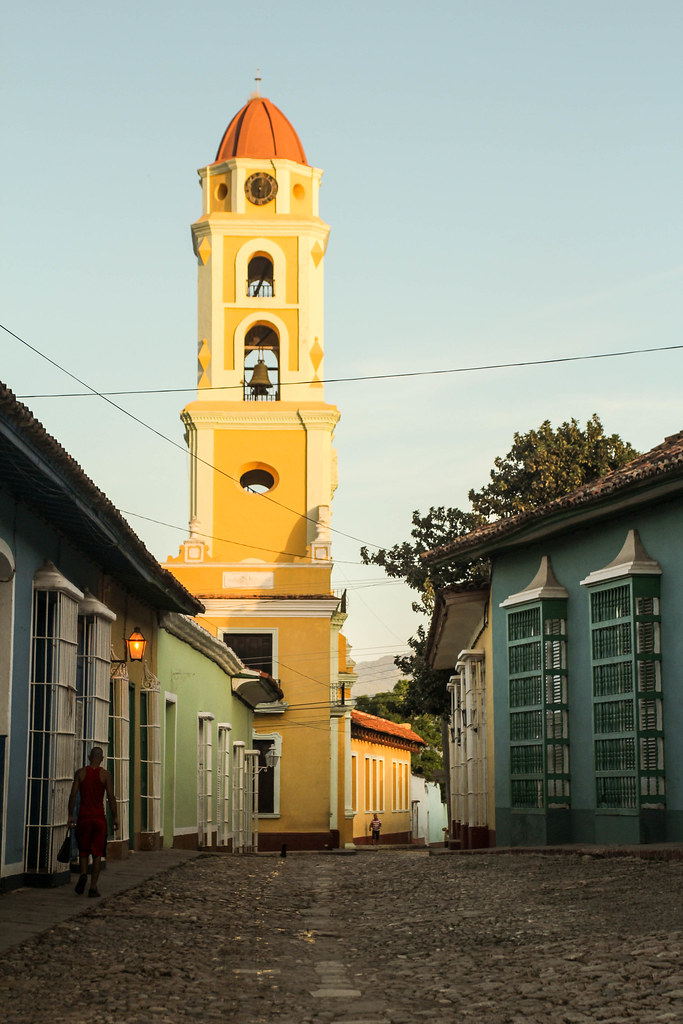 I stopped halfway up the hill, seeing a bicycle shining in the warm light of the morning. It was there, left alone, in the middle of the street, not a soul nearby. “What a safe place”, I told to myself. And indeed, Cuba is one of the safest countries that I have ever visited in my life. 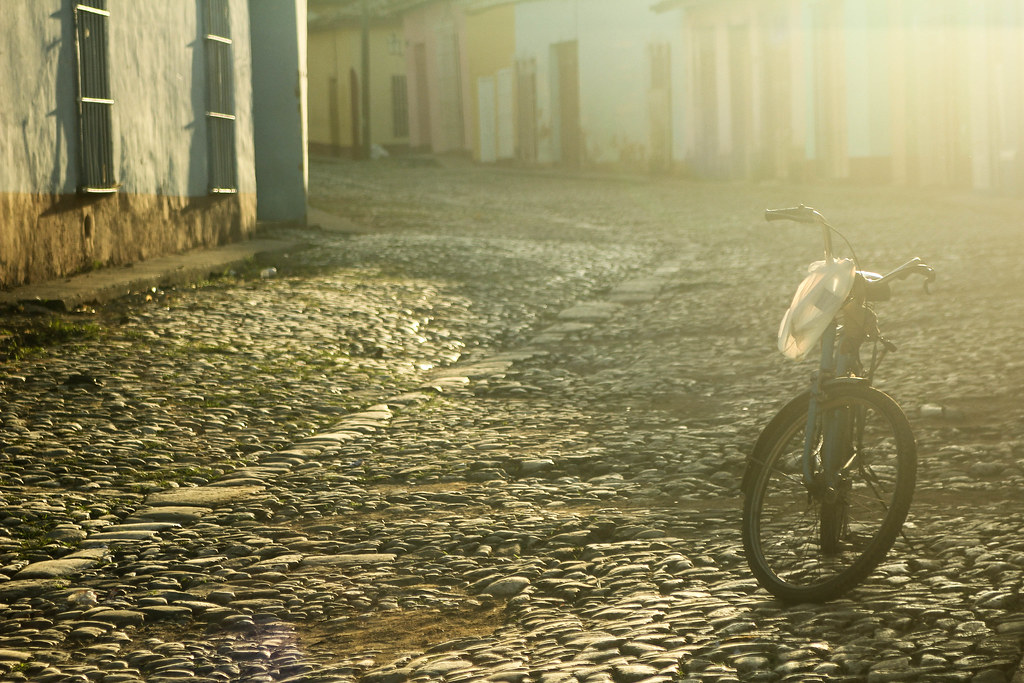 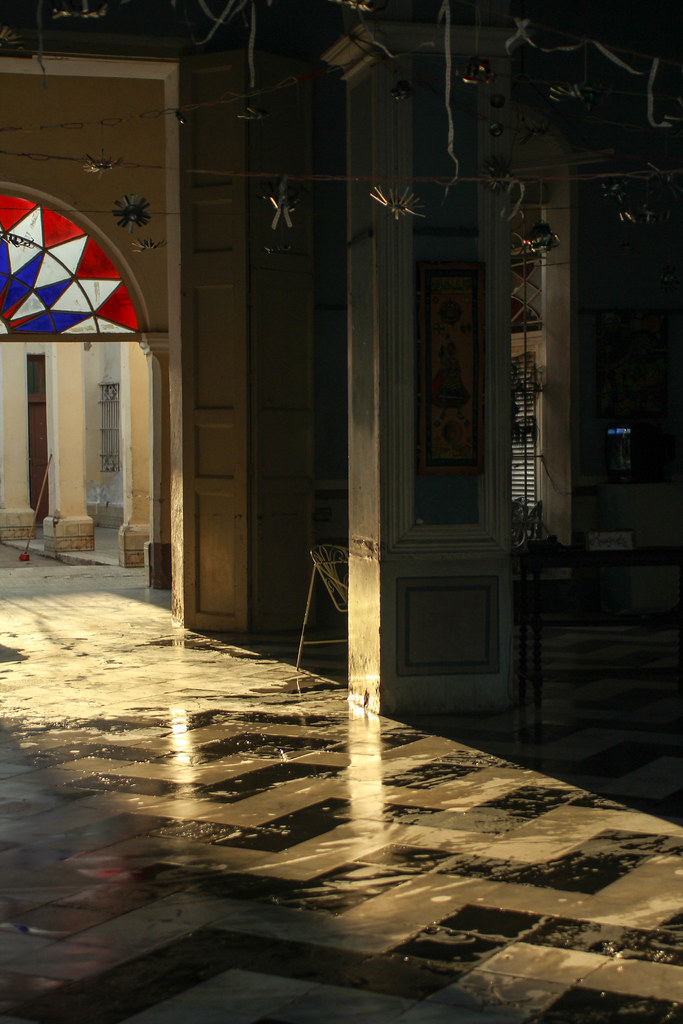 As I continued my walk, I observed the local morning habits.

They were friendly people, passing by, going to work probably. They were saluting me as I was one of theirs. I can’t describe the feeling of overwhelming that took over my heart. They were simple people, thought by their families to be polite. A habit that almost disappeared back in our countries. I was so impressed and I kept walking and smiling, I felt like I belonged there. 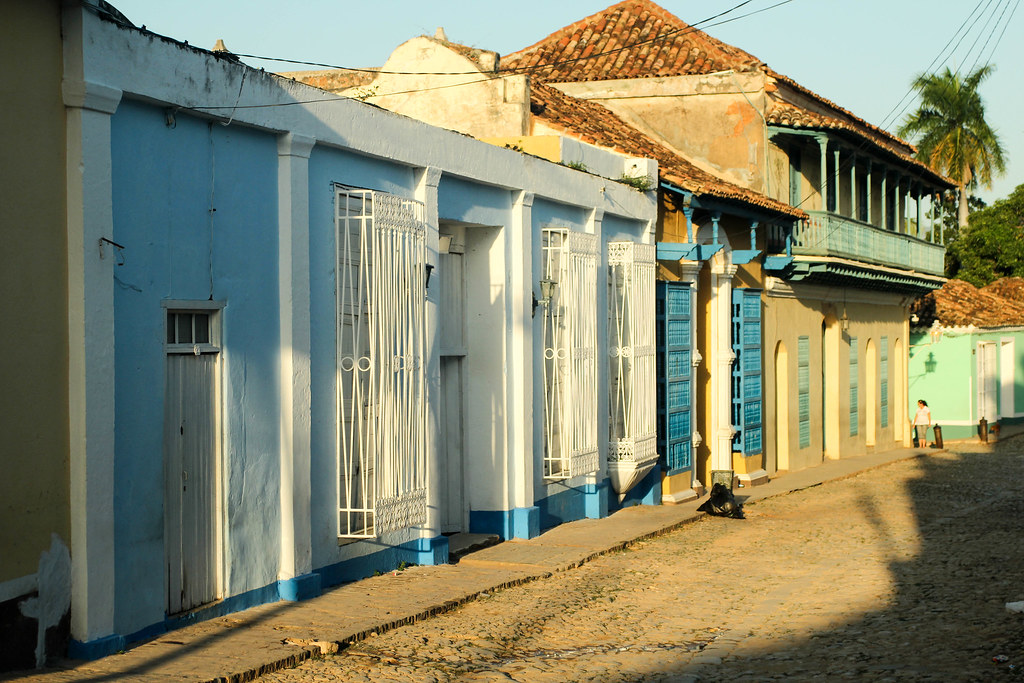 By the time I reached Plaza Mayor the sun was up. That’s when I noticed a man with a long stick in his hands. His job was to turn off the street lights. 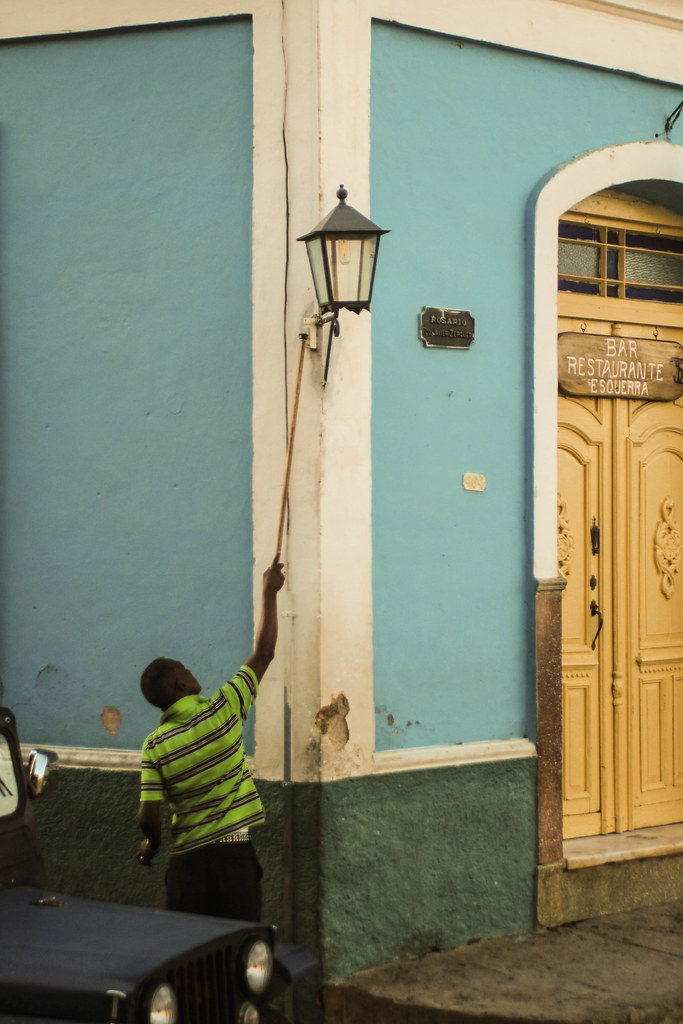 I have also peeked inside one of the Government stores, the places where the Cubans are buying the products from their ration cards. An almost empty space, with a big stack of eggs on one side of the counter and an old fashioned scale on the other. Behind, shelves holding a few bags of flour, a few of sugar and a bottle of oil. And then it hit me… this used to be my country 26 years ago. Stores were empty and people were queuing in front of them since 5am in the morning, hoping to be able to still catch a loaf of bread or a bottle of milk. And suddenly I got a lump in my throat. This is how my grandma grew up… I was back in time, back when she was little and she was forced to break into the trains stopped in the train station from her small village, to steal molasses so that her family had what to eat. 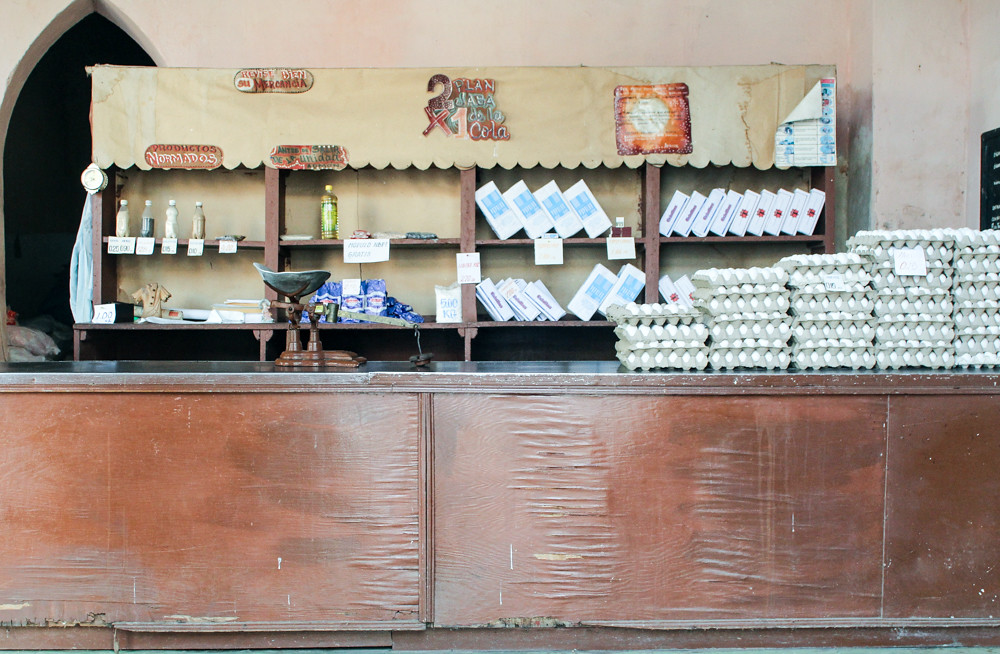 Back to the casa, I went on the rooftop to take some more pictures, and that’s where Emma found me. Breakfast was a blast, our host even made cakes for us. When I came back from my stroll, I found him in the kitchen making fresh pineapple juice for us. 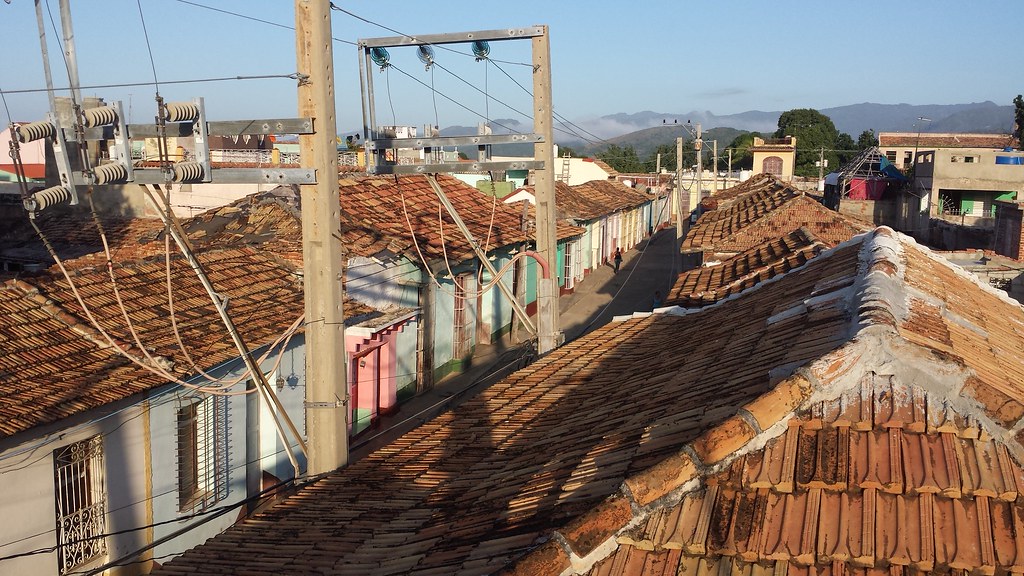 We had the day free and we unanimously decided that we want to go to the beach, as Trinidad is just a few miles away from the Caribbean coast. We booked Hector, our driver, for the day, and after getting lost a few times, we made it to Playa Ancon. Unfortunately, because of a storm during the night we were unable to go snorkeling, as there was no visibility under the water. However, the sun was shining, the temperature was high and the beach was empty. We saw a hobby cat and an idea arose in our minds. What if… so we approached it and soon enough a muscly man, very tanned, with dark eyes and long hair showed up. It was extremely cheap to rent the boat for an hour so me, Emma, Steve and Kris decided to go for it. It was my first time on a hobby cat (a sailing boat without an engine) and I had no idea how to sit on, so I just laid down. Every time the boat was going over a wave, the water would splash me, cooling my body off from the heat. It was a wonderful experience. 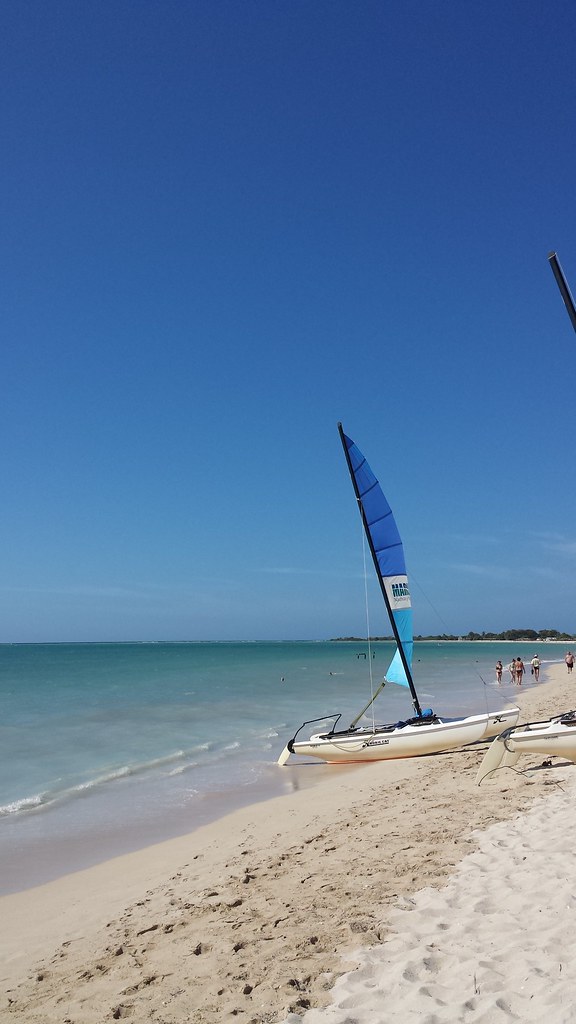 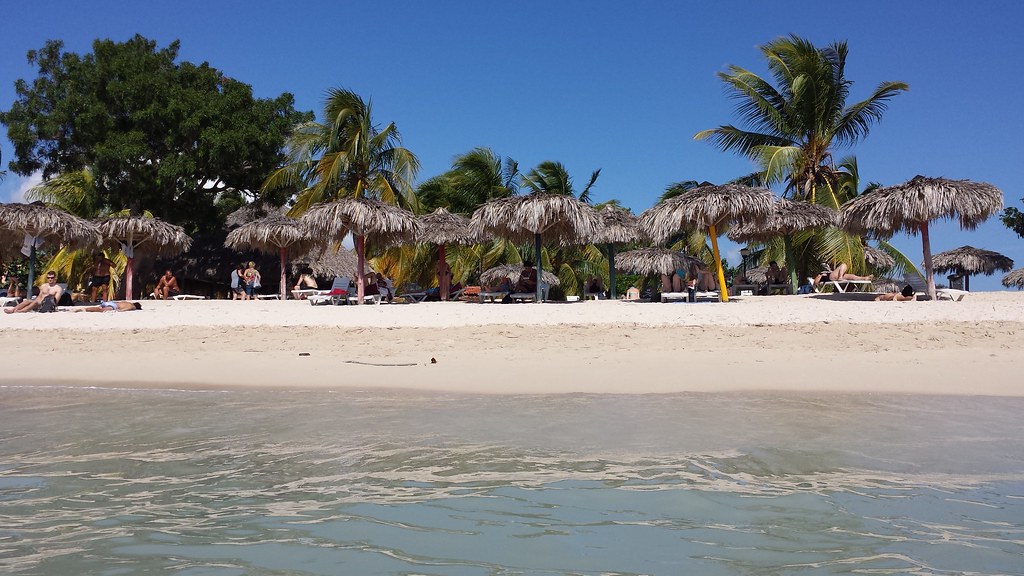 We returned from the beach in the afternoon and me and Emma went to explore the local market, searching for some original souvenirs. The people in the market were lovely, each of them was trying to make conversation with us and trying to sell some of their work for just a few dollars. I ended up buying two beautiful wooden statues of a Cuban couple, a man playing his guitar and a woman playing the maracas. Both of them have painted on them the Cuban flag. I have only paid 6 CUCs for both of them, and the seller gave me a beautiful bracelet as a sign of appreciation that I bought from her. Besides the market we also met with the local taxi, with one horse power. 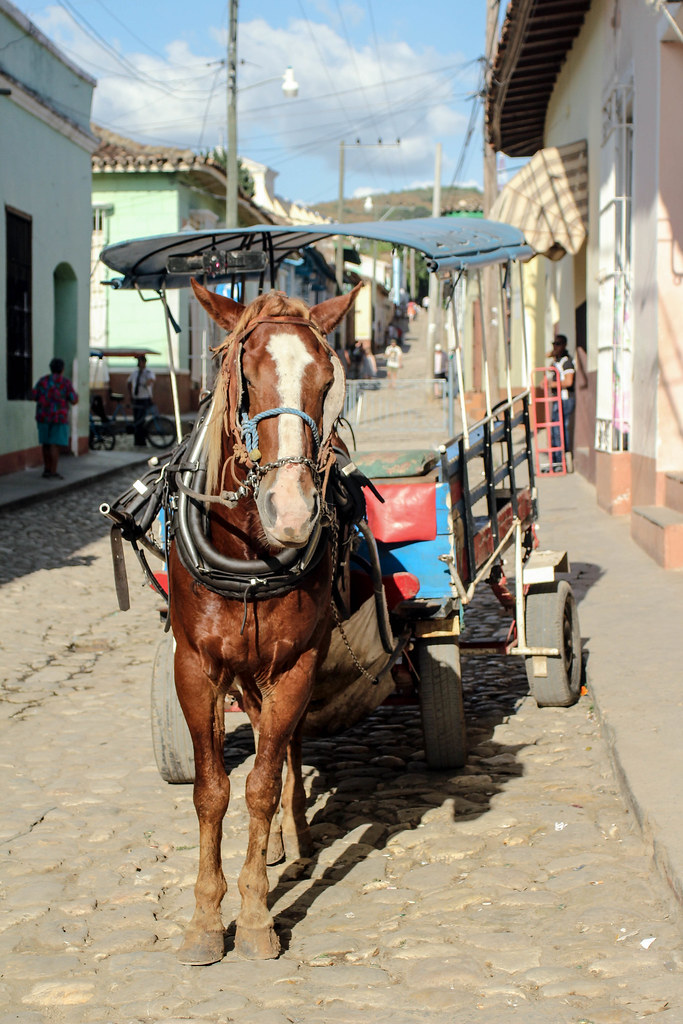 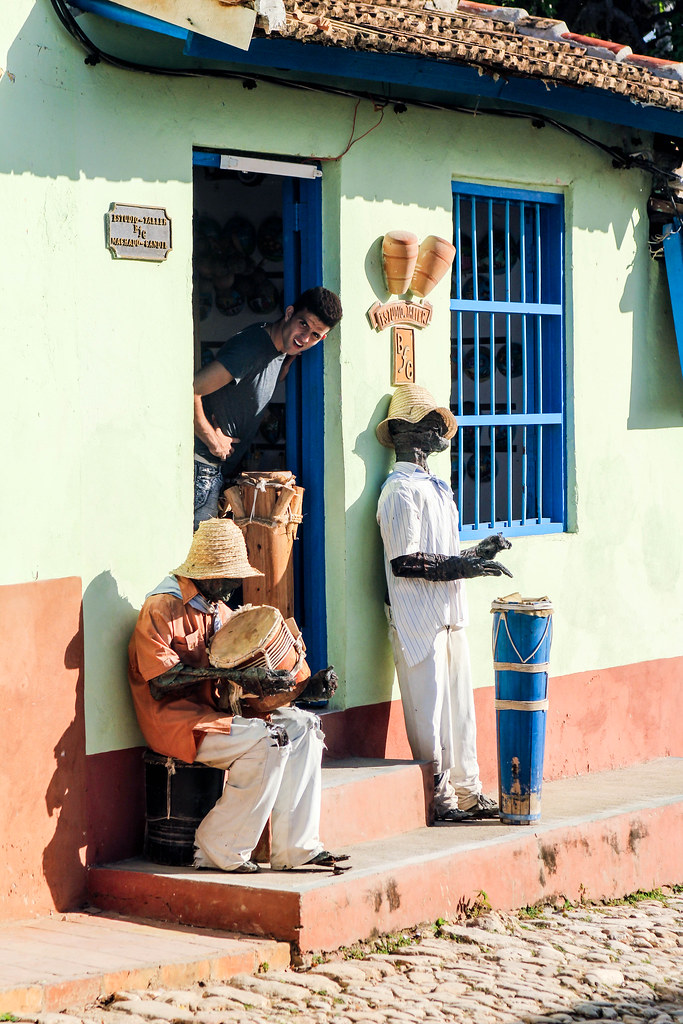 We returned from the market and, we found ourselves meeting each other at the restaurant of the Iberostar Hotel. Some of us just wanted a coffee, some wanted to go online and some were just curious. It was funny how we met there without talking to each other about it. It was interesting to see how a state run hotel looked like, again, because I come from an ex-communist country and this trip was also a personal history lesson for me. 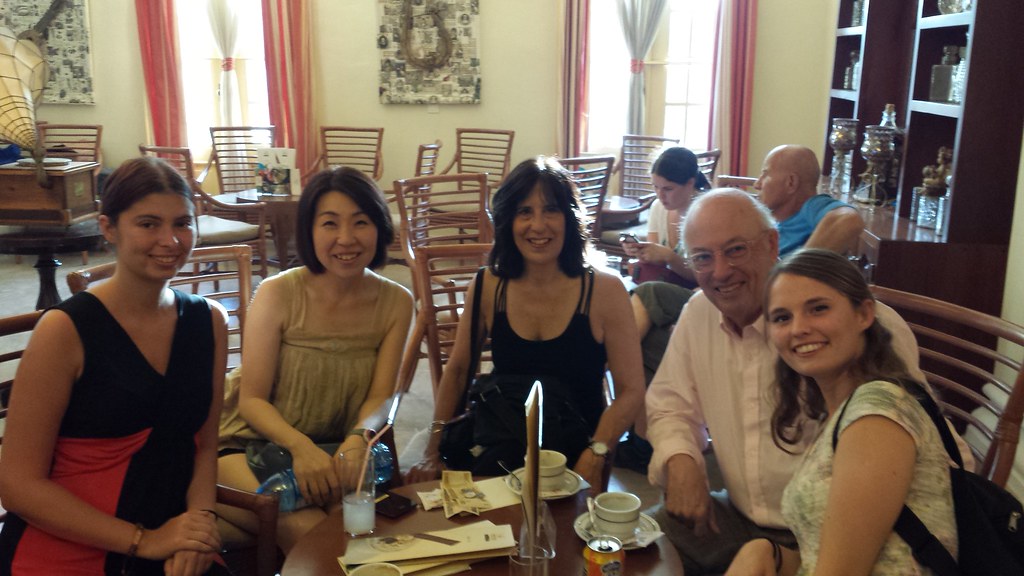 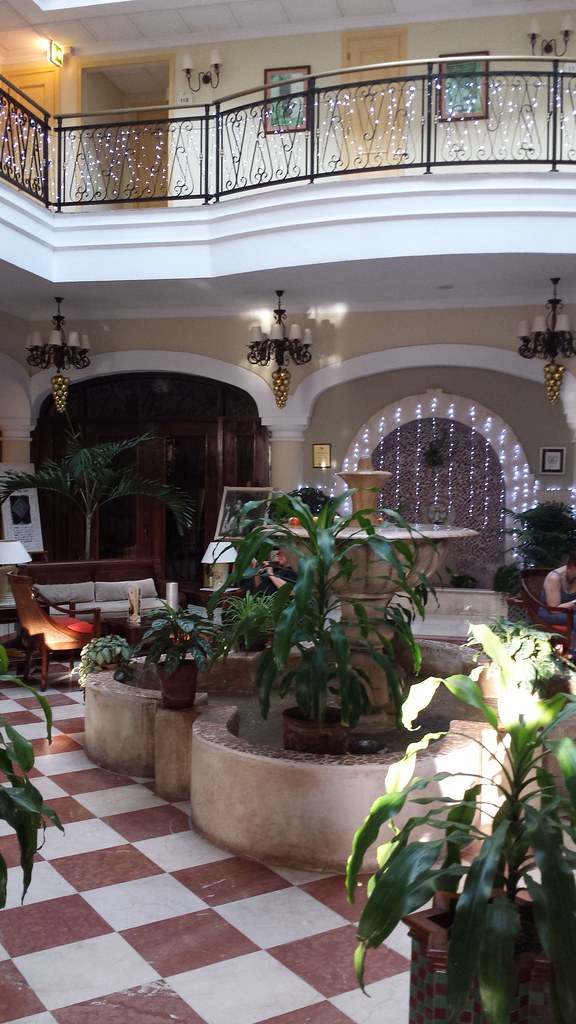 It was time for our salsa lesson, which, as someone that can’t move her feet, I wasn’t really looking forward. It was a lot of fun though, and I did manage to do the basic steps. And, the most important, I can still remember them. I was happy when the instruction danced with me and told me I’m doing great, no mistakes. 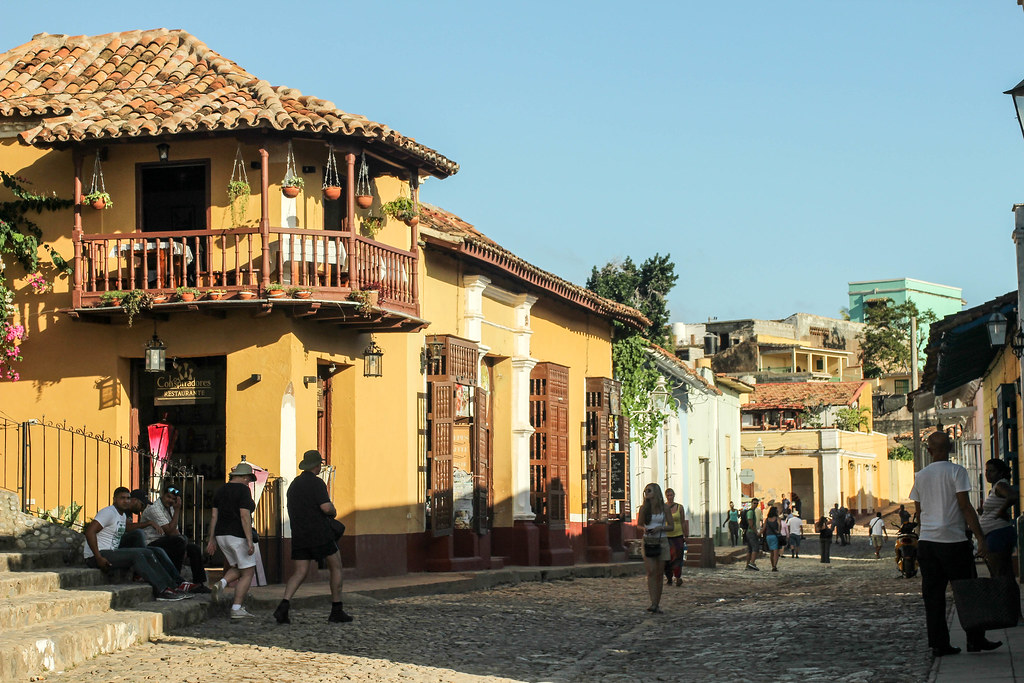 We had our dinner at another amazing restaurant, Las Gitaras (The Guitars). As the name suggests, the restaurant is guitar themed and even the food comes on plates with musical notes drawn in sauce on them. The atmosphere was very beautiful, a young man playing classic Cuban songs on… a guitar, of course. As for the food, I have ordered the pork in coffee sauce which was amazing, the flavours were really strong. Lakshmi wanted to try the dessert but nobody else felt like they can eat a whole cake by themselves so, a funny thing happened. She asked for “a cheesecake and 10 cucharitas por favor” (10 teaspoons, please). We are still laughing when we remember this moment and we did replicate the the moment a couple of times after that. 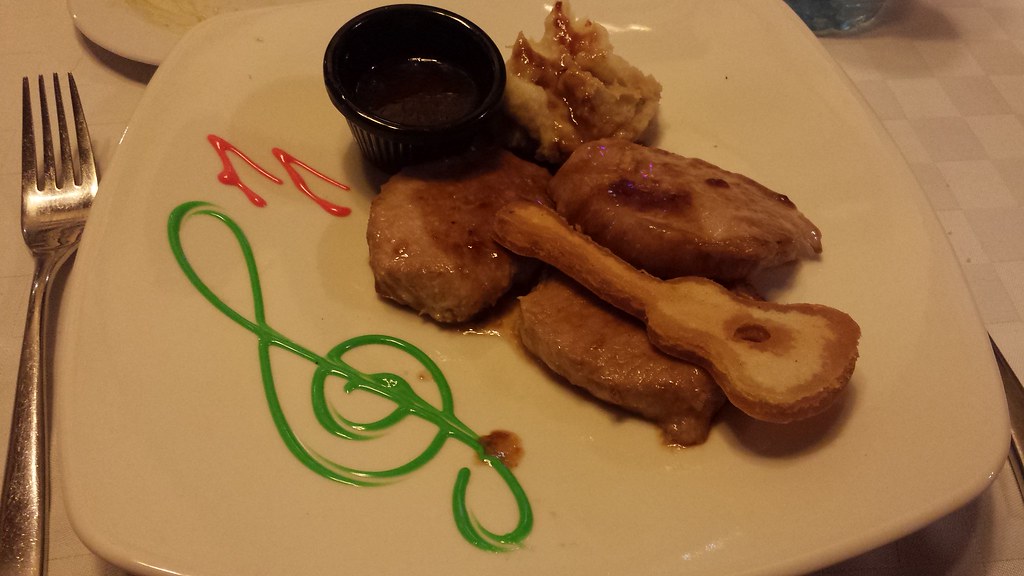 At the end of the meal we received a cigar as a souvenir, which I thought it was a very nice touch.

96 thoughts on “Trinidad – Where I left my heart in Cuba”