It was still dark when we climbed down the stairs of the ghat, leading to the Gange river. The air was cold and we couldn’t see anything beyond the steps ahead, just a white cold haze, surrounding us. When we stopped, on the gray concrete lane leading from one ghat to the other, we suddenly heard a choir of laughter. We looked at each others confused… what was it, where did that laughter was coming from? We took a few steps to our right and we discovered the source: a group of maybe 7 people, including a child, all following a yoga teacher, laughing after each move.

“Laughter yoga” – an old Indian told us, seeing the confusion on our faces.

Laughter yoga, or Hasyayoga, is a type of yoga that involves voluntary laughing. It is believed that voluntary laughter has the same psychological and physiological benefits as spontaneous laughter and, the forced laughter will anyway soon transform into real laughter. It is a technique developed by the Indian physician Madan Kataria and it combines relaxation exercises with breathing techniques that prepare the lungs for laughter.

The laughter was contagious and before we knew it, we were also laughing.

However, we couldn’t stay too long, as our boat was waiting for us. The ambient was very heavy. Our boat was floating on the calm water of the river Ganga, while we were surrounded by a white mist, unable to see almost anything in front of us. It was very quiet, nobody was talking. All we could hear was the sound of wood burning on the shore, and sometimes, glimpses of smoke were breaking up the haze, allowing us to believe that we are not lost. 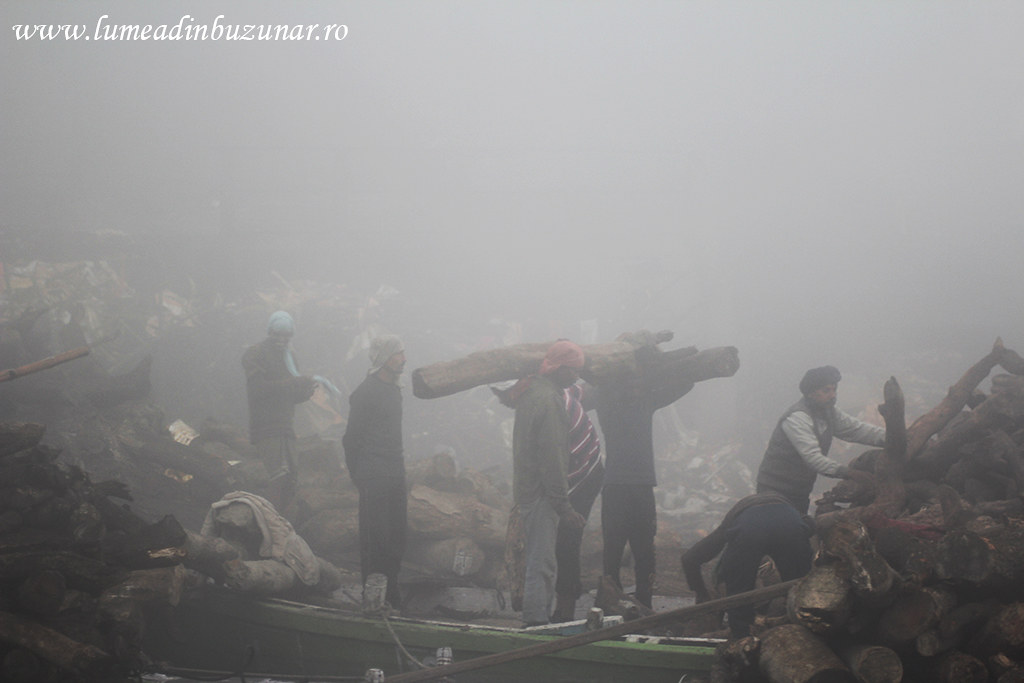 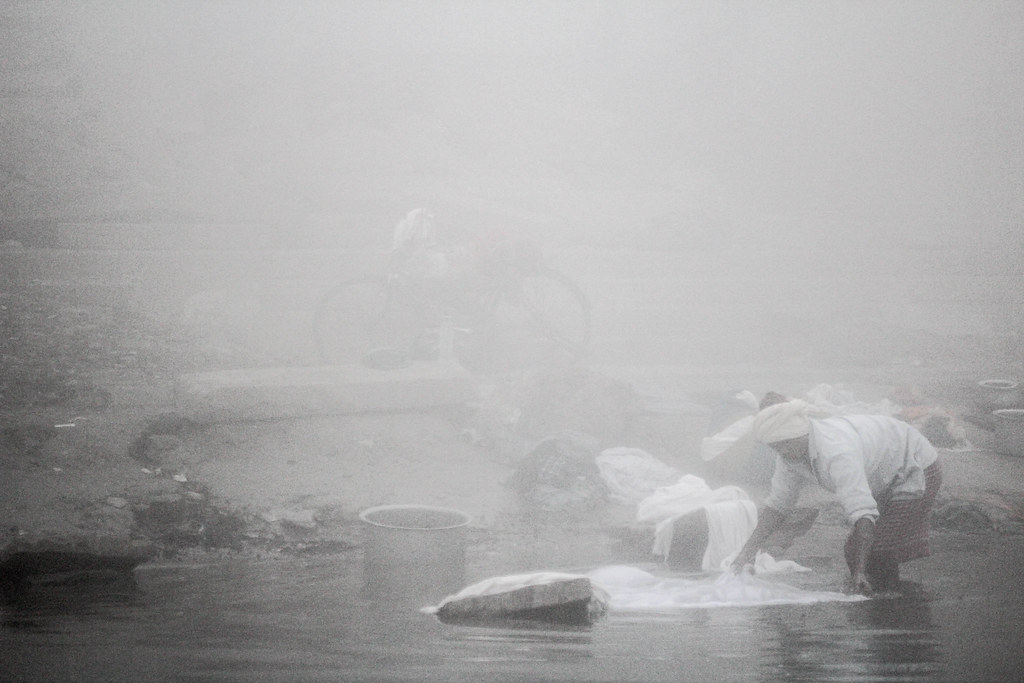 On the shore however, life was going on as usual: some people were taking their morning bath in the river, others were doing the washing up a few meters higher, a few others were praying. In front of us, two lovers were kissing in a boat. 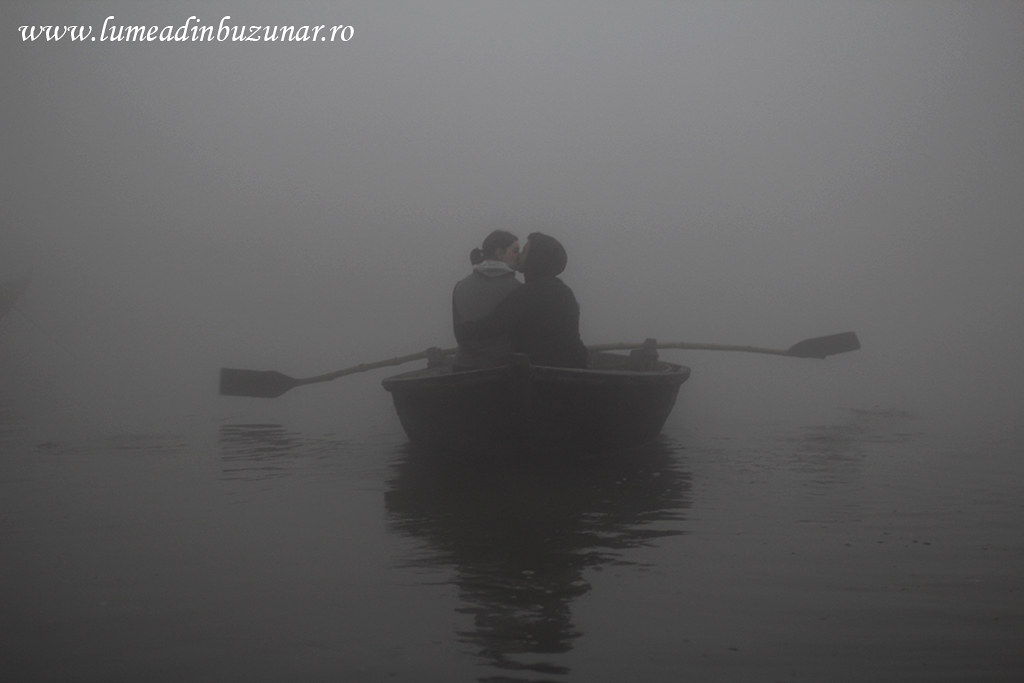 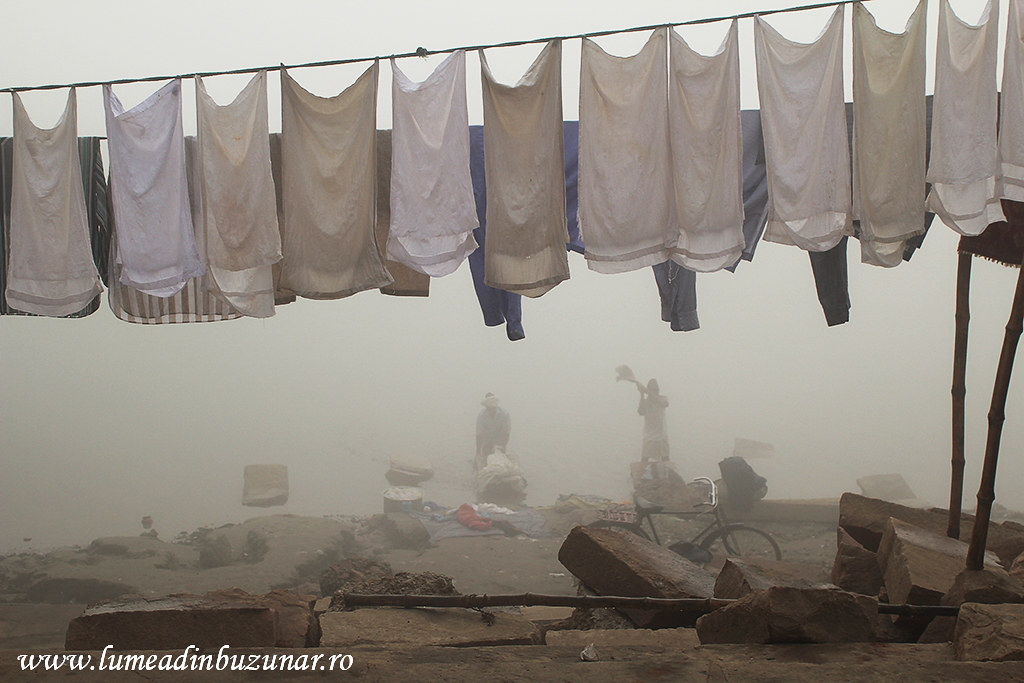 After about an hour, another flour ceremony and a warming cup of chai, we headed back to the ghat where we started. Our tuk tuks were waiting for us to take us to the bakery where we would have breakfast. The cafe was small and cosy and the menu looked fantastic: hash brows, Marsala omelet, walnut bread, real coffee – what a treat! I even bought few of that bread to go, for a later snack.

Do you want to try a unique experience in Varanasi? Try the bhang lassi! 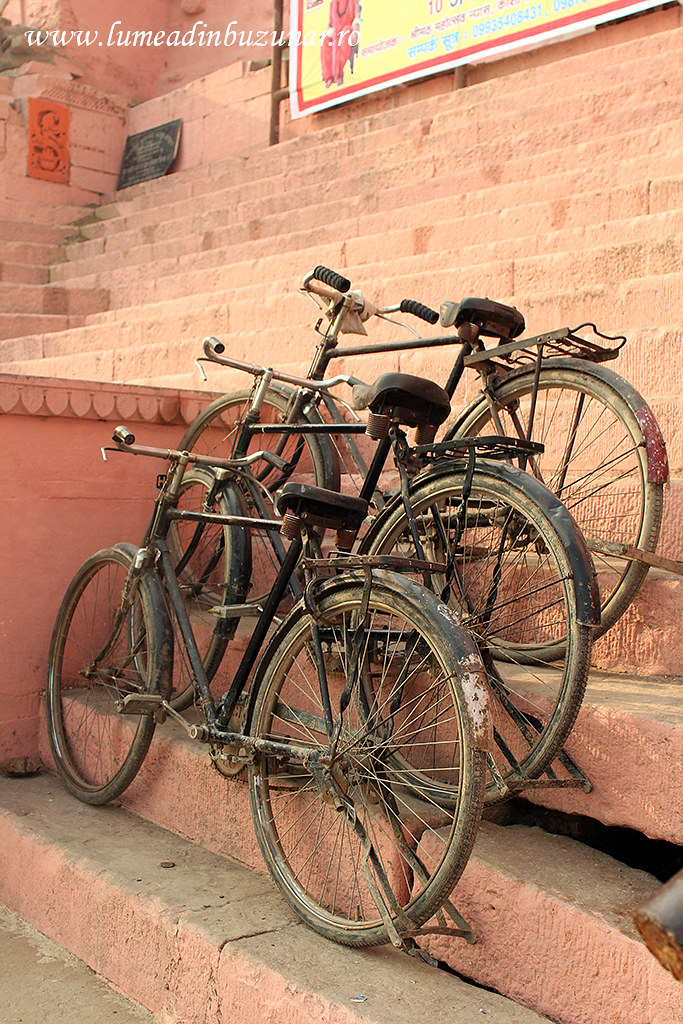 After breakfast we were taken to a “textile neighborhood”, were and old man showed us the process of making fabric, from the early stages of selecting and dying the silk, through the process of manual embroider of the saris, until the finished product in the shop. 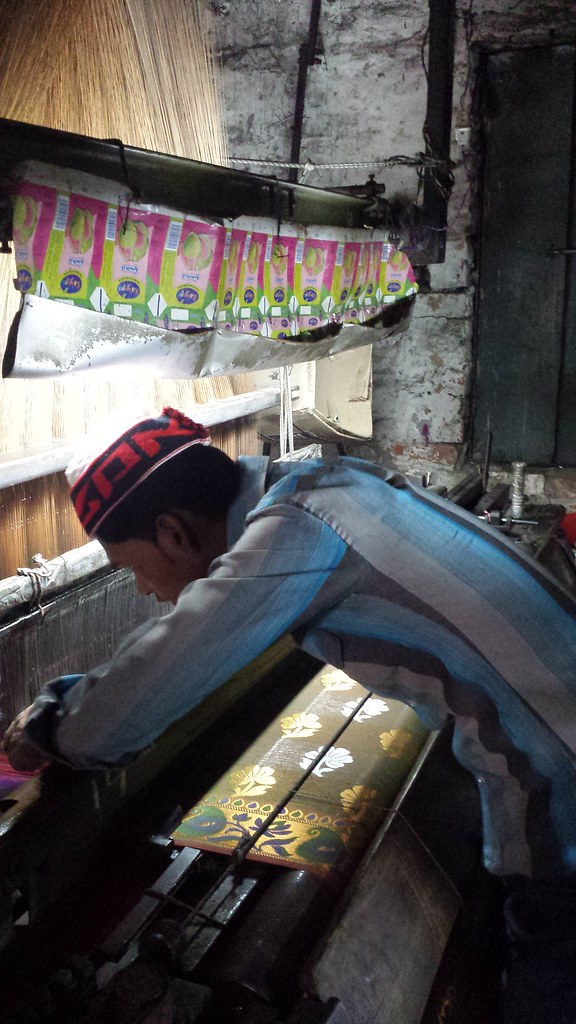 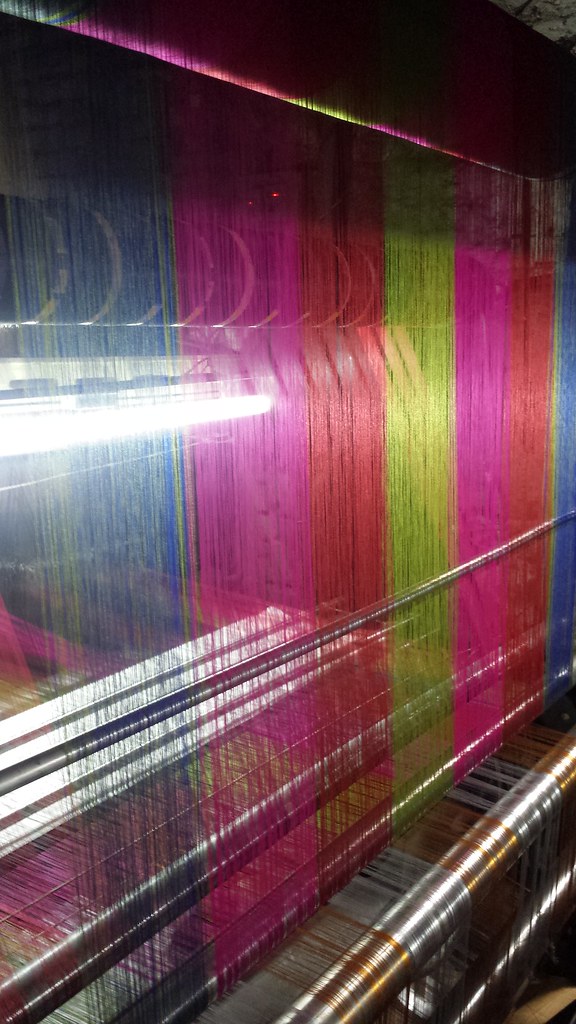 Varanasi is famous for the production of Banarasi saris, one of the finest sarees of India, worn on special occasions, like weddings. It takes between 15 days to 6 months to finish a Banarasi saree and they are always hand made. 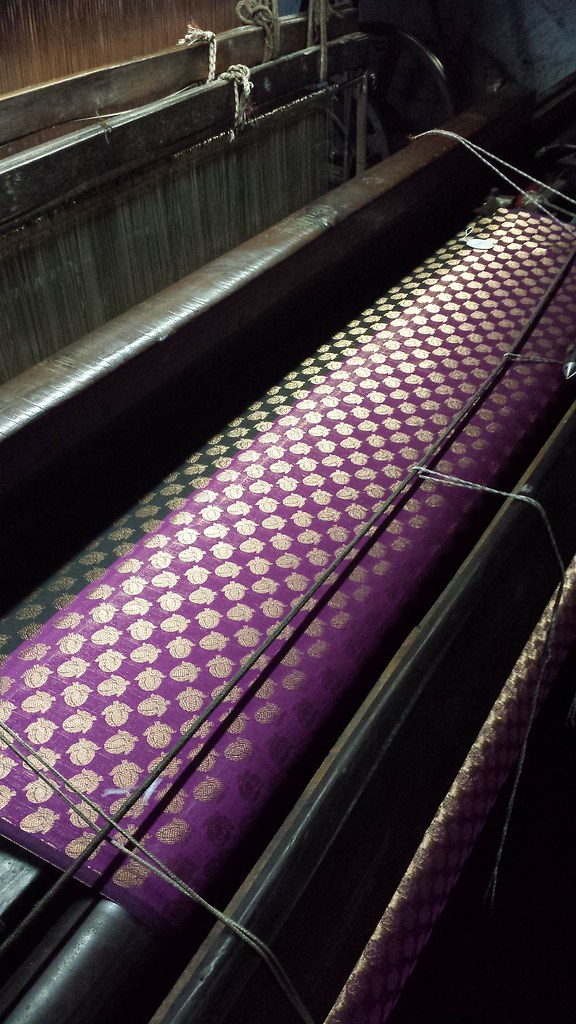 We had the afternoon free, so we decided to find our way from the hotel to the ghats and walk along the river. This proved to be a very difficult task, as the streets of Varanasi are a true maze. We got lost many times and the map didn’t seem to help us. Every time we would ask someone which is the way to the river we would get a different reply. When we finally saw the water, we felt relieved. We strolled along the concrete promenade, passing by people sleeping, women washing their hair, children paying. 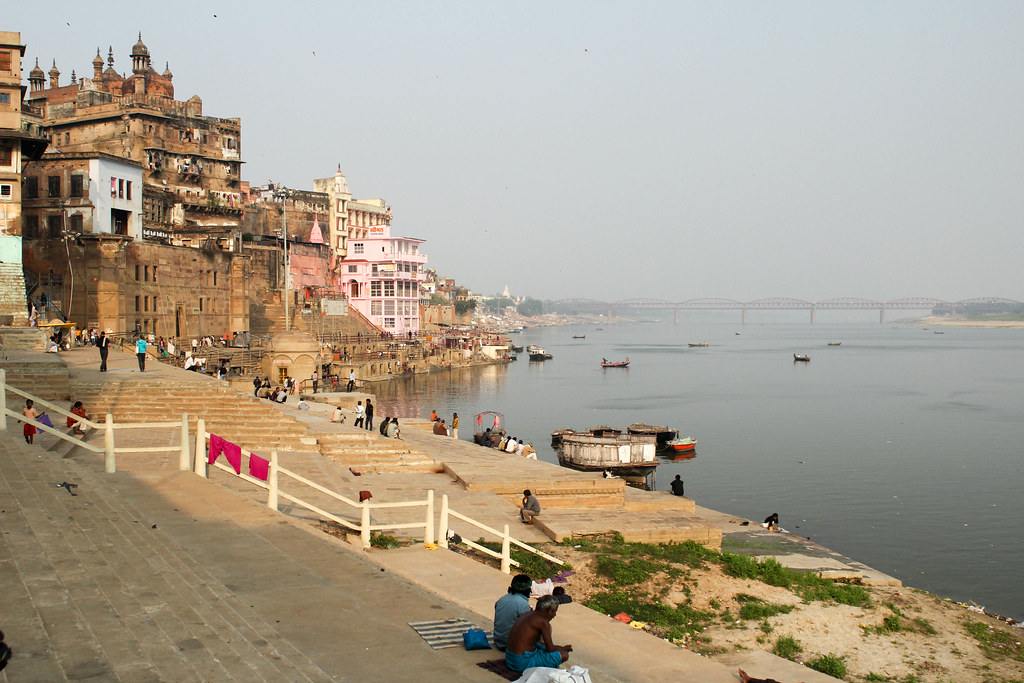 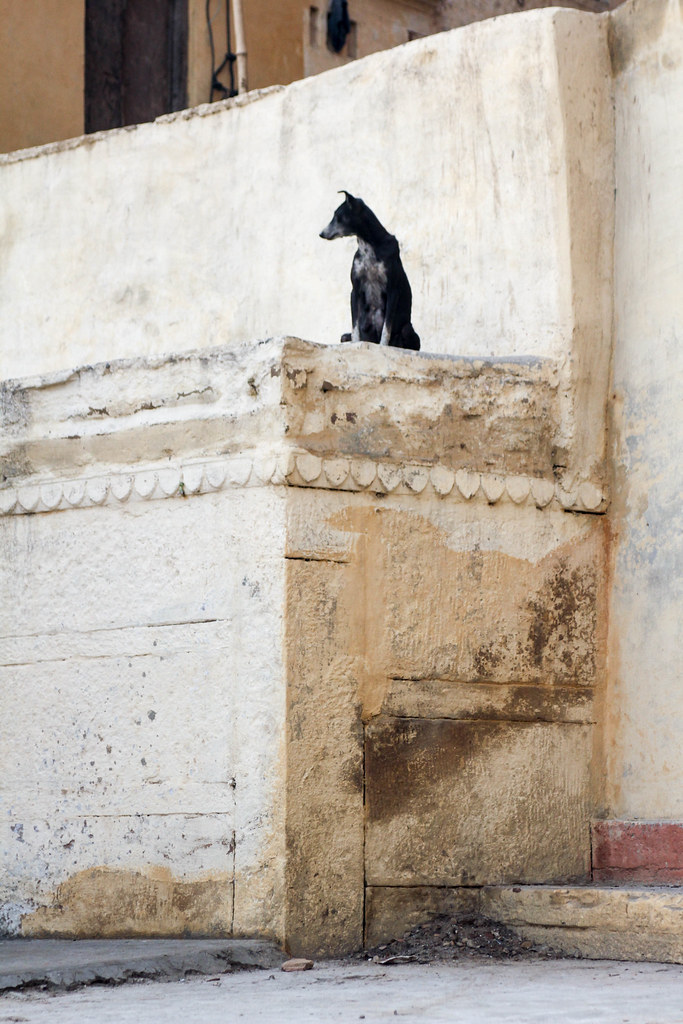 By the end of the walk it was just 3 of us left. We tried to see the sunset but again, the fog didn’t really let the sky put on a show. It was still very nice to just sit down and enjoy the view of the daily local life. It was pretty difficult to find a tuk tuk back to the hotel but we managed to negotiate and after 10 unsuccessful attempts, we were on our way back.

See more photos of the ghats of Varanasi taken by Lakshmi here. 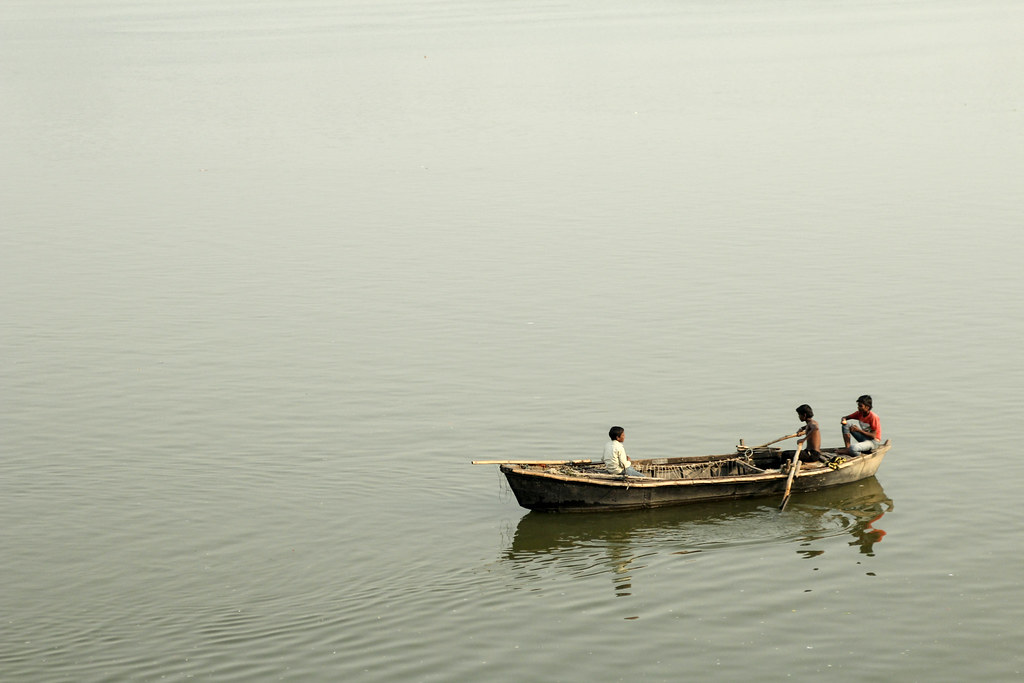 We had dinner in the hotel’s restaurant. I didn’t expected much when I ordered Mushroom Methi Malai. But oh I was so wrong. It was delicious! The creamy sauce and the fresh taste of the fenugreek put this curry into top 3 the best meals I had in India. 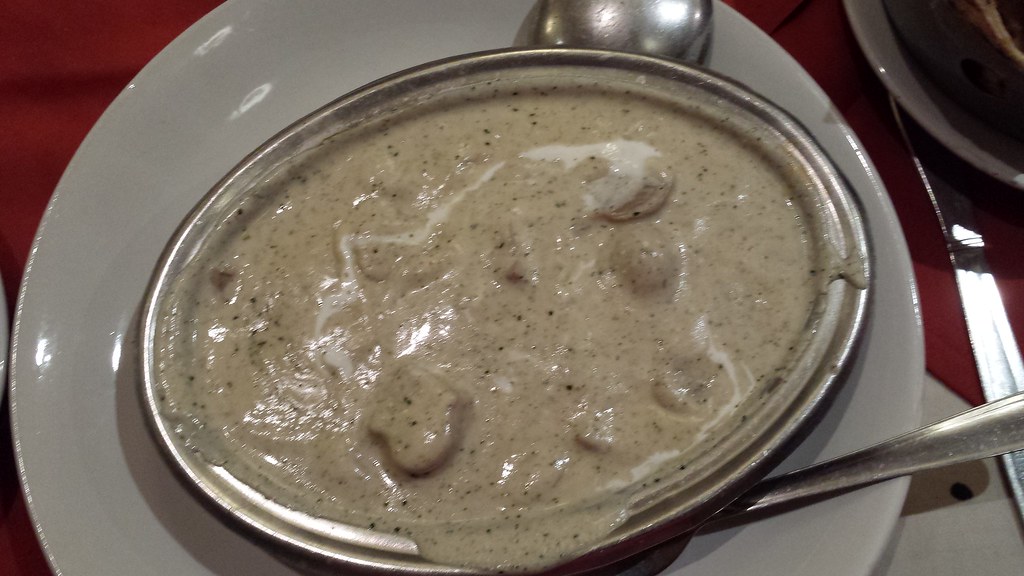