I first found out about Halnaker Windmill and the old Roman Road connecting London to Chichester when my country’s local magazine arrived in the post. The cover was dedicated to the Halnaker Tree Tunnel and wow, it did make an impression on me. I opened the magazine straight away to check where this stunning tree tunnel was and, to my delight, I found out that it was just a mere 30 minute drive away from my home.

Whilst the trail can be walked all year-round, I would say that the best time to go to the Halnaker Windmill is in autumn, when the trees have started to change colour from green to beautiful shades or yellow, orange and red.

When I visited, the warm autumn light was pushing delicately through the tree branches, creating a beautiful sparkling effect.  As I went on a weekday, there were very few people around,  and at times I had the entire tunnel just to myself. And that felt so special!

How to Get to Halnaker Windmill 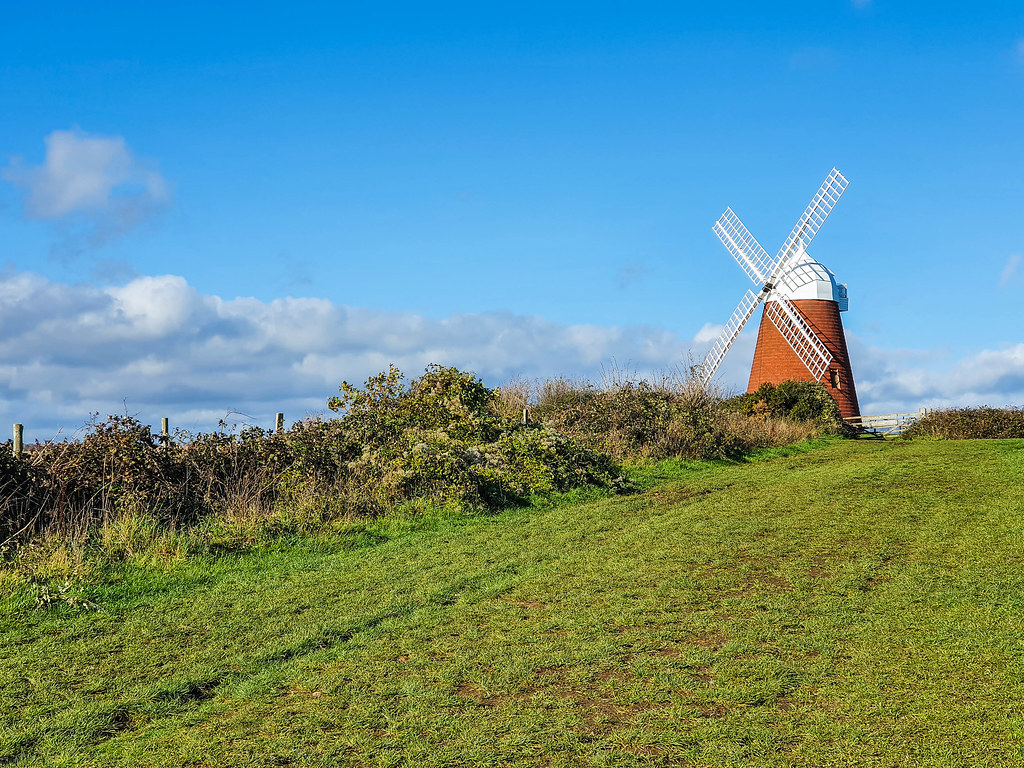 Getting to Boxgrove, the closest village to Halnaker Windmill, is fairy easy. From Chichester, take the A27 and turn left onto the A285. If you are coming from London, it takes just under two hours to get here. You can either come via the M25 and M23 or drive the scenic route through the Surrey Hills AONB and the South Downs National Park. I would choose the latter. Other places I would recommend you to visit if you are in this area are Arundel and Littlehampton.

If you choose to come by public transport, the number 55 bus connects Chichester train station with Halnaker and Boxgrove. You can check the schedule here. 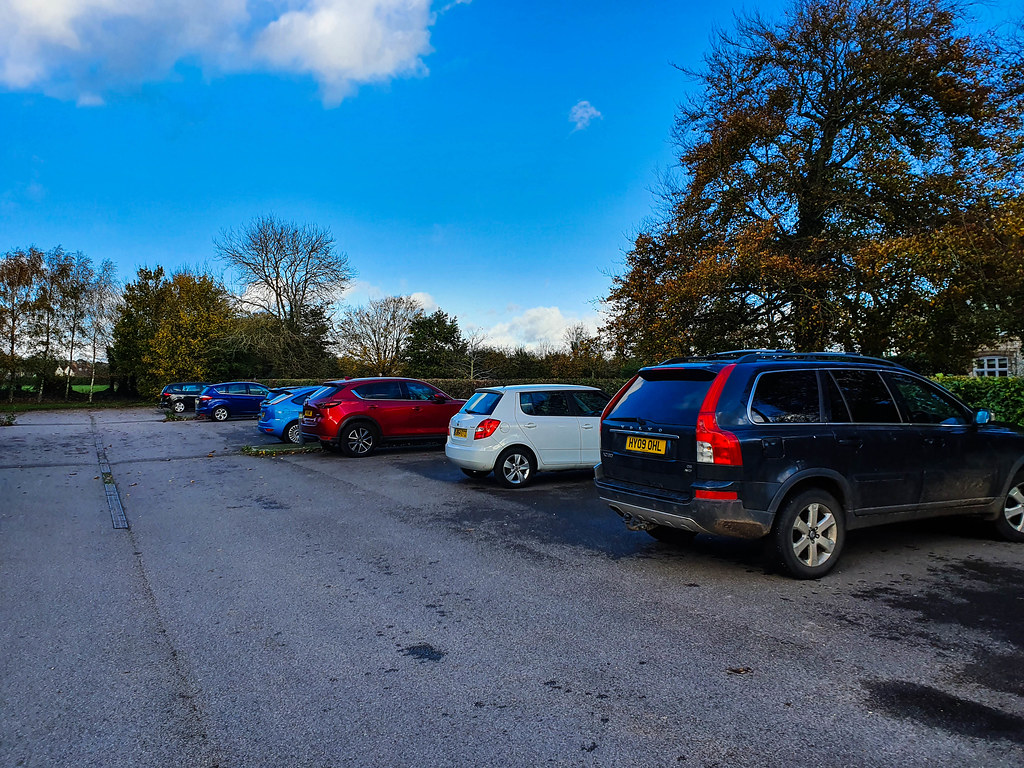 Whilst there is a small lay-by at the beginning of the lane leading to the Halnaker Windmill and Tree Tunnel, I wouldn’t recommend parking there. There are only a few spots and, unless you arrive really early, they will all be taken. Also, the lay-by is adjacent to a working farm with big agricultural vehicles going in an out all the time.

The best place to park if you want to walk to Halnaker Windmill trail is in Boxgrove Village. The village hall has a large, free of charge car park which also has a charging point for electric cars. Click here for the GPS location of the parking. 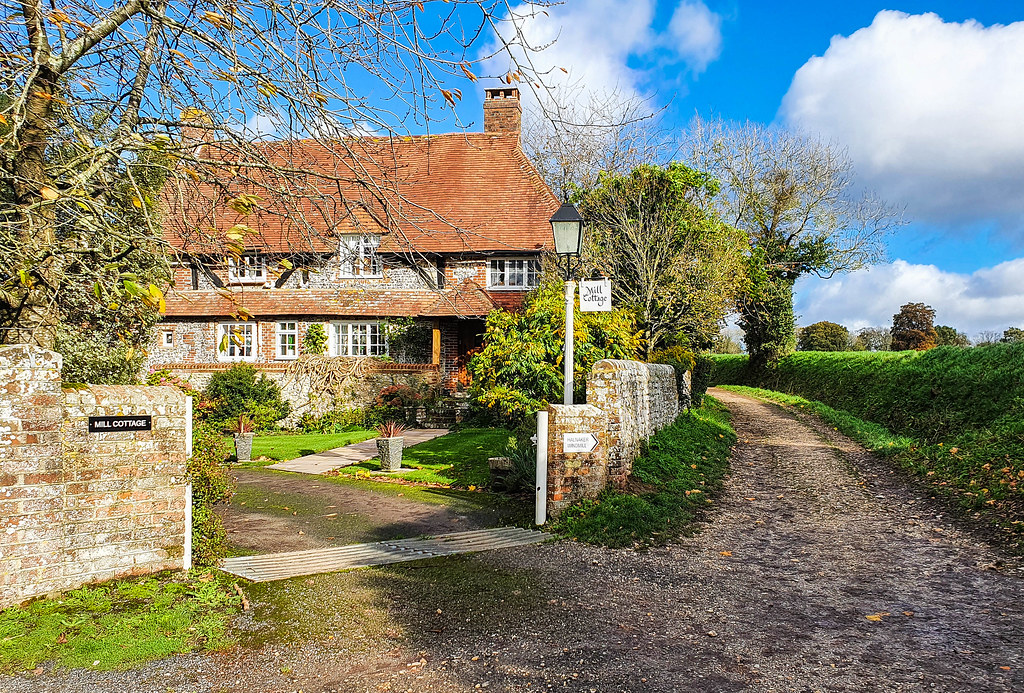 Whilst the trail is very well signposted as “Windmill Trail”, I know that some people, including me, prefer to have a proper map with instructions to follow. Visit Chichester and the Great Sussex Way have a great map which you can save on your phone and follow on the day. You can download it from here.

As I was changing my shoes near my car in preparation for the hike, a couple approached me and asked if I knew how to get to the tree tunnel. As it was my first time there, I didn’t know the way but, because I had the map saved on my phone, I was able to email it to them on the spot.

Halnaker Windmill Trail is marked as moderate, with kissing gates and stiles. However, I found it quite easy. The only part which I thought was moderate, was the hike up to the windmill, which is quite steep. But that didn’t take longer than 10 minutes. The total ascent of the trail is 300 feet.

The Halnaker Windmill Trail starts in the Boxgrove car park and continues on the other side of the road through the beautiful vineyard of Tinwood Estate. For detailed directions, please refer to the downloaded map. 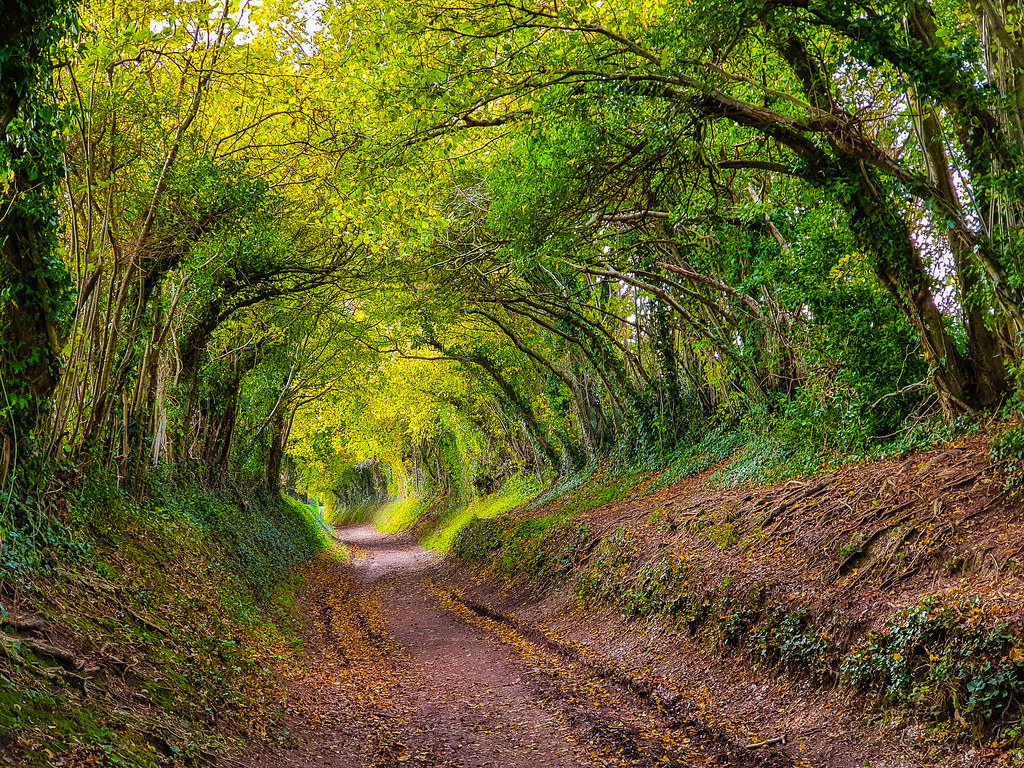 The name of the Halnaker Tree Tunnel is actually Mill Lane. Centuries ago, this was the 57 mile long Roman road connecting London to Chichester. It may have been built sometime around the first century AD, during the first decade of the Roman occupation of Britain, but nobody knows for sure. Many people have walked along this road, and that is so hard to imagine, seeing how quiet and undisturbed the path is. 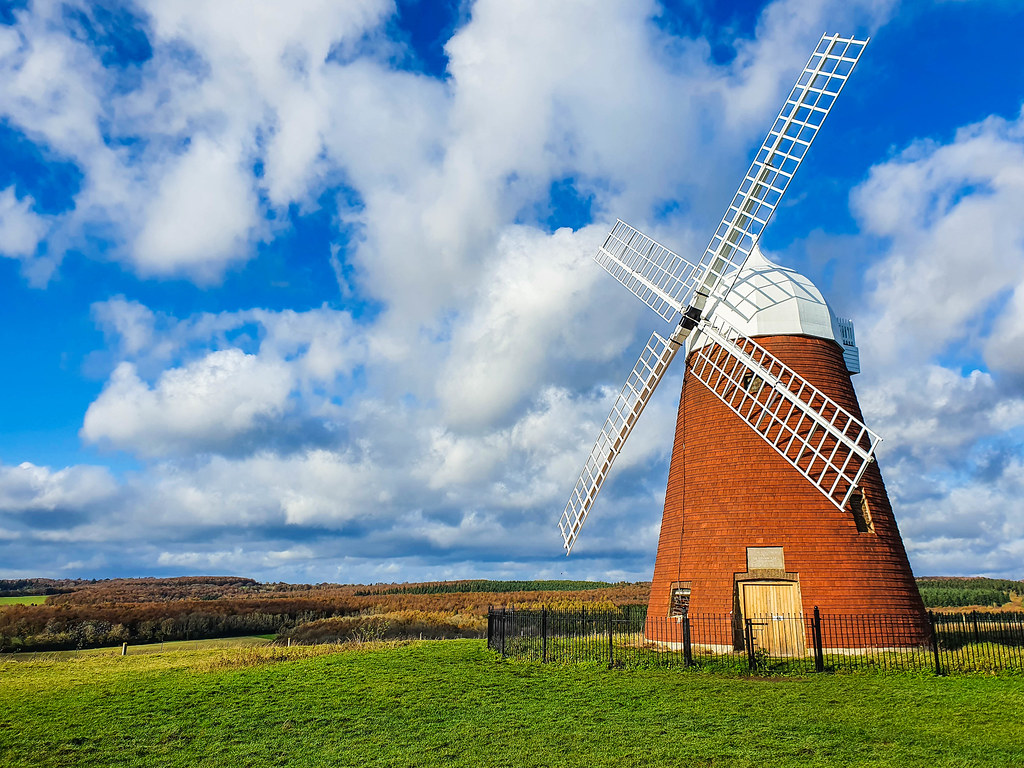 Once you step out of the tree tunnel, continue up the hill, and you will soon reach Halnaker Windmill, from where you can admire stunning views over the coast and countryside. Halnaker Windmill has been recently renovated, and is now a popular touristic attraction.

The first mention of the mill was in 1540, but it was only registered as an official building in 1850. Therefore, nobody really knows how old the windmill actually is. It is believed that Halnaker Windmill was built for the Duke of Richmond, as the feudal mill of the Goodwill Estate, belonging to the manor of “Halfnaked”.

Initially, all the parts of the mill were made out of wood. The sails worked two pairs of overdrift millstones to grind wheat or grains.  Halnaker Windmill was functional until 1905, when it was struck by lightning which damaged its sails and windshaft. It was first repaired by the craftsmen of Heathfield village, as a memorial to the wife of Sir William Bird.

If you are interested in other windmills around the UK, check out my article about Rottingdean and its windmill.

Other Attractions along the Halnaker Windmill Hike: 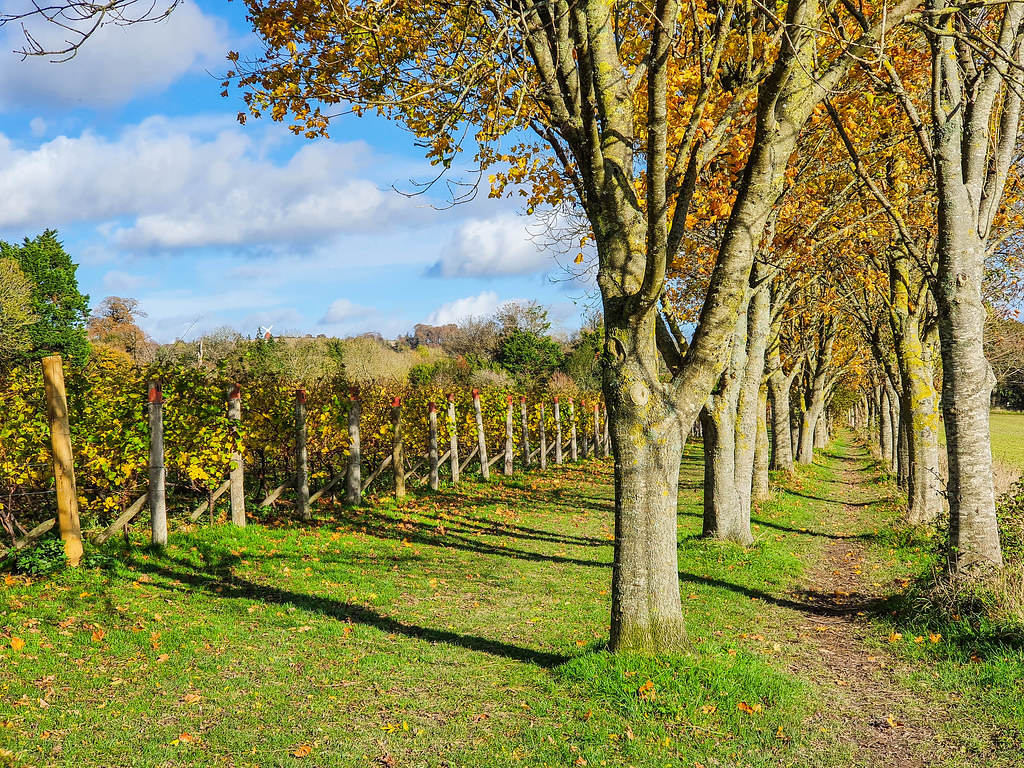 Tinwood Estate is a relatively young vineyard, where you can stop by for a tour and a local wine tasting. They produce only sparkling wine from three different types of grapes: Chardonnay, Pinot Meunier and Pinot Noir.

If you are looking for other great vineyards in Sussex, click here to check out my review of Rathfinny Estate. 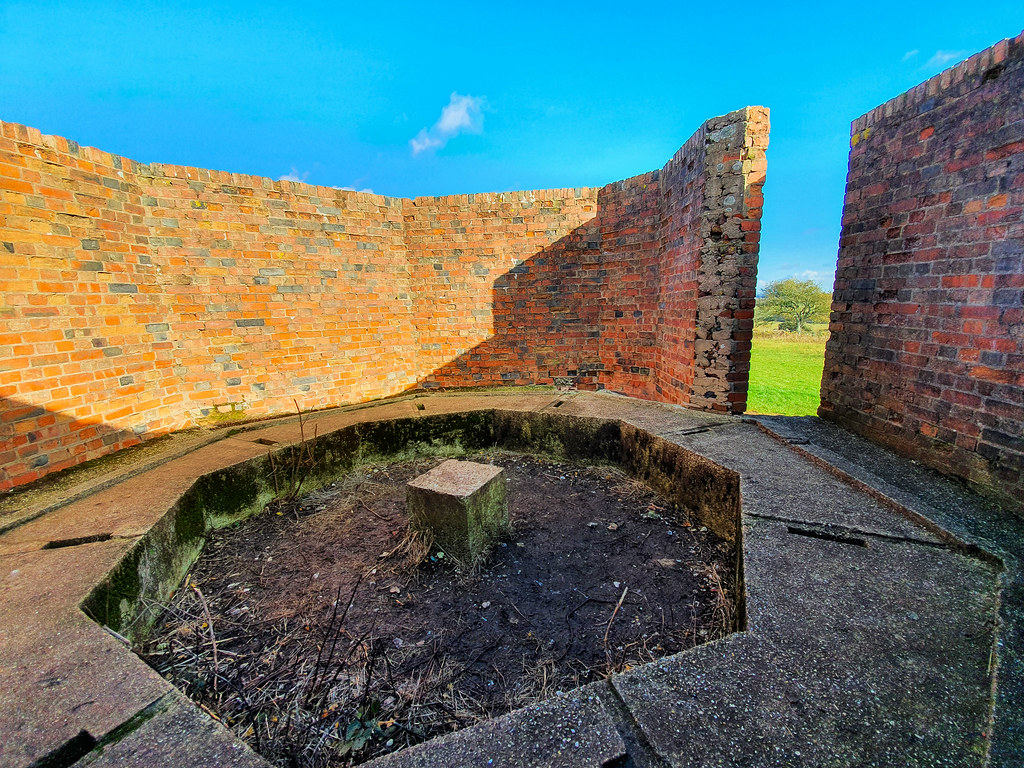 About 50 meters away from the Halnaker Windmill are the remains of a bunker used in the Second World War. This was used to monitor radio transmissions from aircraft travelling to and from the South Coast. There are a few more structures around, but only this one is accessible to the public. 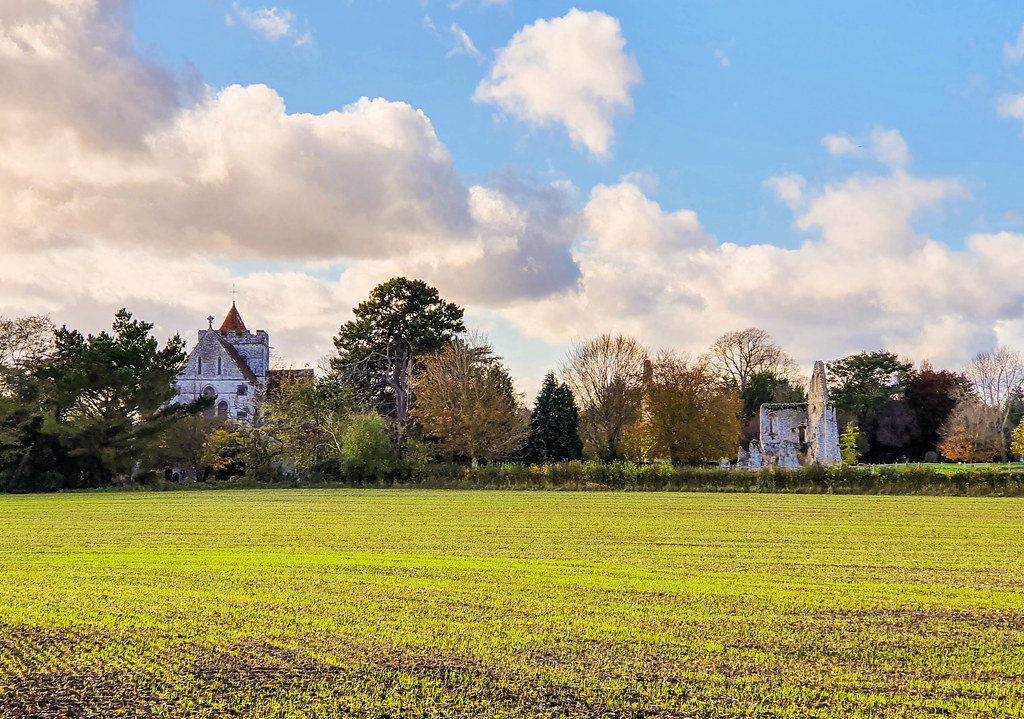 At the end of the trail, just before getting back to Boxgrove, you will stumble upon the ruins of the Benedictine Priory of St Mary the Virgin and St Blaise. It was built in 1117 by the Lord of Halnaker, Robert de la Haye as a cell of the abbey of Lessay, in Normandy. Initially only three monks lived here.

In 1536, Henry VIII signed the Dissolution of the Monasteries Act, which saw the Priory being sold to Sir Thomas West, who invested in building a new chapel and painting the nave. After being passed from private ownership to the Crown and back, the priory was converted into the Parish church of the village.

Today, all that is remaining of the old priory is the lodging house, parts of the church and the chapter house. The beautiful nave, chancel, central tower and transepts survived and are now part of the present-day church.

Whilst the quarry can’t be visited, it is worth mentioning because it is a very important archaeological site.  The oldest human remains in Britain have been found here, dating from around half a million years ago. The remains of Homo heidelbergensis can be seen at the Natural History Museum, whilst the flint artefacts are at the British Museum.

At the end of the walk, you will probably want to relax with a drink, or some lunch. I know I did! The Anglesey Arms Public House is a 200-year-old country pub with a beautiful garden and a traditional rustic interior. It is believed that the pub was named after the Marquis of Anglesey, whose daughter married into the Richmond family, who live nearby in the Goodwood House.

If you plan to spend the night in the area, check out the luxury vineyard lodges at Tinwood Estate. Otherwise, there are quite a few B&Bs around. Check out the current availability on Booking.com below: