Jaipur is known in India under the name of “The Pink city”, even if it’s not really pink but more of a light orange. History says that when Queen Victoria and the Prince of Wales visited the city in 1876, the Maharajah painted the city in pink because that is the color of hospitality. Since then, the tradition became law and all the citizens of Jaipur are obliged to paint and maintain the color of their houses pink.

Jaipur is also one one the largest cities in India and also the gateway to Rajasthan, one of the most beautiful states of the country. It is a vibrant city, full of life and both people and animals roaming around on narrow streets. It is also the “spices city”, where you can find hundreds of shops selling garam masala, red chilli, cumin seeds, turmeric, cardamon and the famous saffron. The whole city centre is a bazaar, where whole sections of streets sell the same things: the clothes bazaar, the jewellery bazaar, the shoes bazaar, even the souvenir bazaar. And all the prices are negotiable. 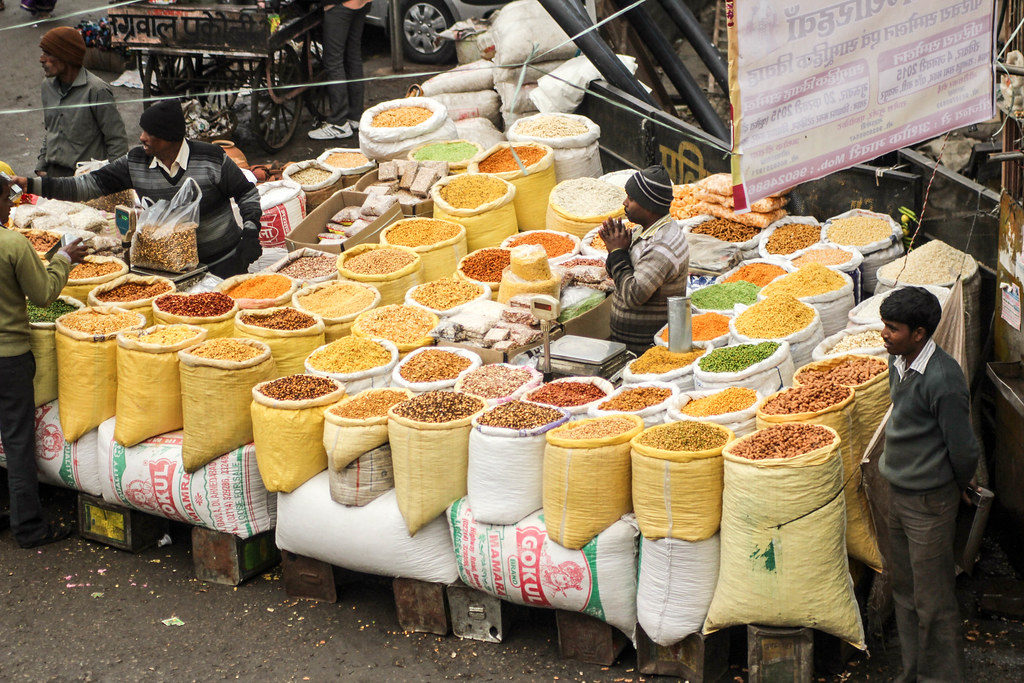 We arrived in Jaipur in the afternoon and we checked in at Jaipur Inn, a family run small hotel. We have been greeted by the owner, a very nice man that straight away invited us to join him for his morning hike in the hills nearby. I was impressed on how friendly the hotel was, with lots of board games and a great kitchen that made heavenly lemon and honey pancakes. We didn’t spent much time in the hotel, even if we were tired. We jumped in tuk tuks and went to an orientation tour of Jaipur. To be honest we didn’t see much, just an empty temple from where you could see a nice view above the pink houses. Then we went spice hunting. We firstly when to an “official” seller that presented us each spice but he had tourist prices. So we left and went towards the spice street, where we found the same spices but for a quarter of the price. I bought a lot of spices, gifts for friends who cook Indian curries, and a nice masala blend for me – to make chai at home, in England. 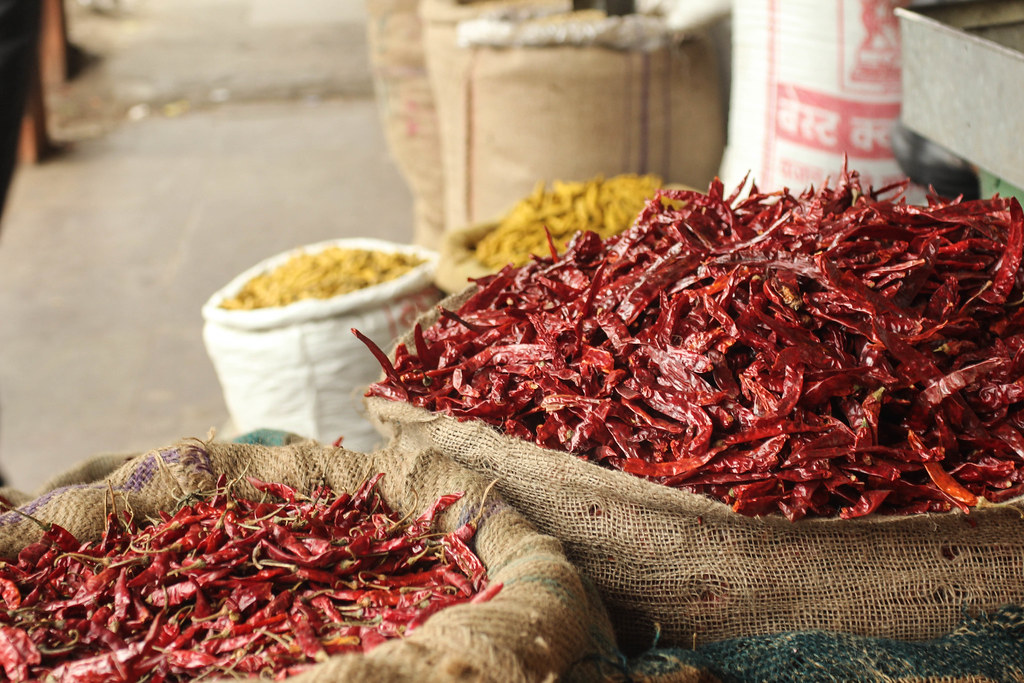 Jaipur has one of the oldest cinemas in India, and we were told we need to go and see a movie. And hey, how can you refuse a movie invitation, in India. Doesn’t matter you don’t know the language. Our guide ordered the tickets and there we were, on our way to see PK, the latest Bollywood production. We stopped a few streets away from the cinema and got a glass of tasty lassi, the best drink you can get in India. The original one is made out of milk, yogurt, and sugar and tastes creamy and delicious. It was served in terracotta glasses which you were allowed to break after finishing  drinking.

The starting hour of the movie was fast approaching so we headed over to Raj Mandir cinema, which is not a simple hall where you see a movie. Oh, no! Raj Mandir is a whole experience, having a beautiful lobby decorated with impressive chandeliers on the high ceilings and tiny sculptures on the walls. The movie screen is covered by red velvet curtains and they scent the air inside through the air condition system.

We got in and sat on the big armchairs with lots of leg space in front and waited for the movie to start. Believe it or not, PK is a satirical science fiction comedy, about an alien that gets lost in Rajasthan. The movie is half English half Hindi so I understood only parts of it. However, I did enjoy it and the whole experience. I have to say, it is interesting to go to the cinema in India. The movie will have a break halfway and people will keep walking around the all the time. Also, they would be very vocal, “talking” to the actors on the screen.

I can’t remember how dinner went, or if we even had one, before crashing to bed. I did remember waking up rested in the morning and had pancakes for breakfast. 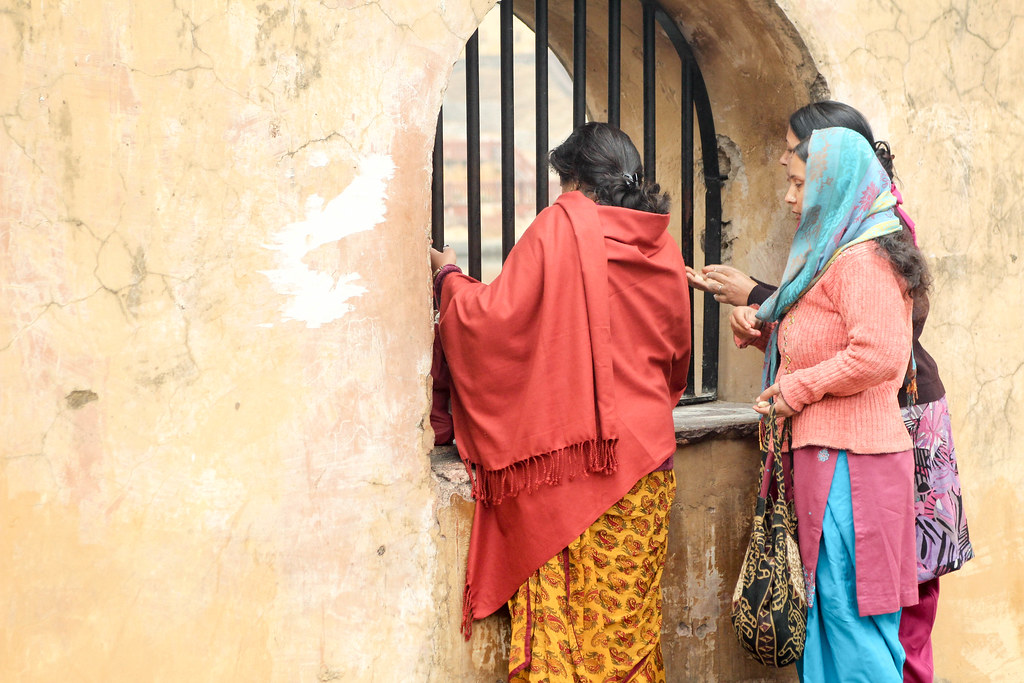 The highlight of the day was about to be the Amer Fort, one of the highlights of Jaipur, 11 km outside the city. I have been there before, on my first trip to India, but I have only admired it from outside. This time we had a guide that told us the history of the fort and also explained the startling architecture. On the way there however we stopped in Jaipur to admire the Palace of the Winds, shaped like a honeycomb of a beehive.  In the past, women of the royal household were observing the street ceremonies from behind the small windows, without being seen from the outside. These days, in front of the Hawa Mahal (the Hindi name of the Palace of the Winds) are a couple of snake charmers with their Cobras. Even if I am terrified of snakes, I felt pity for those animals. For those who don’t know, snakes do not “dance” on the sound of music. In fact, they are trained not to bite in very cruel ways or even get their mouth sew so that they can only open it enough to stick their tongues out. Most of the snakes die in a few months.

Our next stop on the way to the Fort was Jal Mahal (The Water Palace), which stands in the middle of Man Sagar Lake. We didn’t spend too much time here but I remember the guide telling us that we can only see the fifth floor of the palace and that the rest of four are underwater. The Palace walls were covered with a special mortar so that the water doesn’t leak inside. 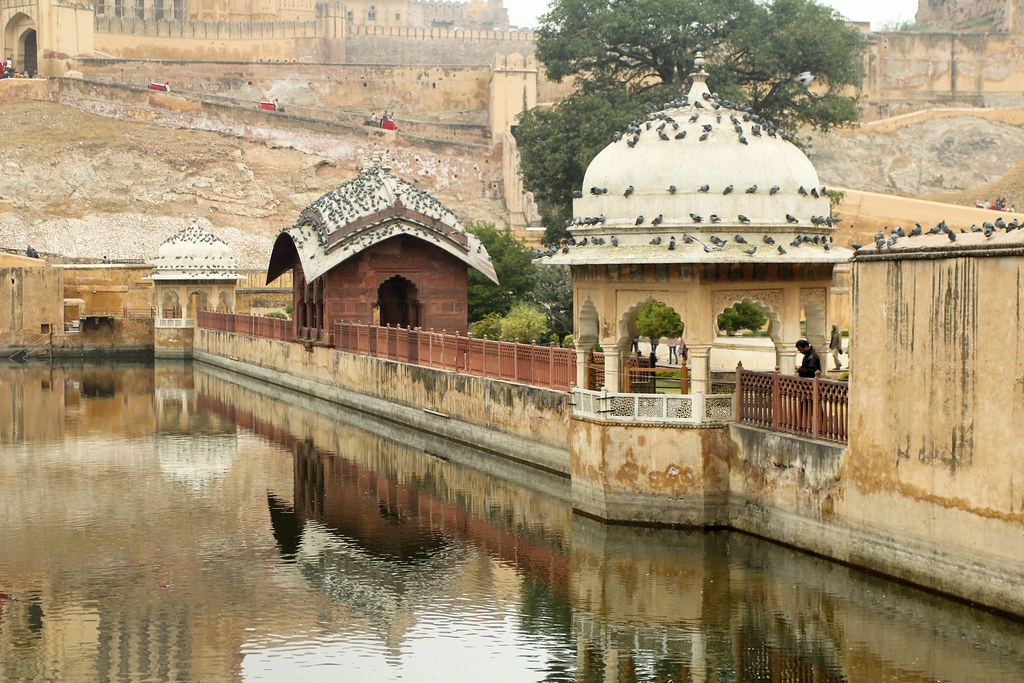 Finally, we reached Amer fort, which is a must see even if you only have one day in Jaipur. But before starting talking about how beautiful this fort is, I want to talk about the main tourist attraction on it: climbing the hill to the fort on top of an elephant. People pay good money to ride the elephants and statistics say that there are about 80 elephants carrying over 900 tourists a day! And no, those poor animals are not treated well. You can see them barely moving, carrying wooden boxes filled with tourists, which hurt their back – I lost my breath climbing the stairs, I can’t imagine an almost 3 tonnes animal wouldn’t! I’ve seen elephants stopping on the way while their keepers hit them. You can see the sadness in their eyes, if you look closely! 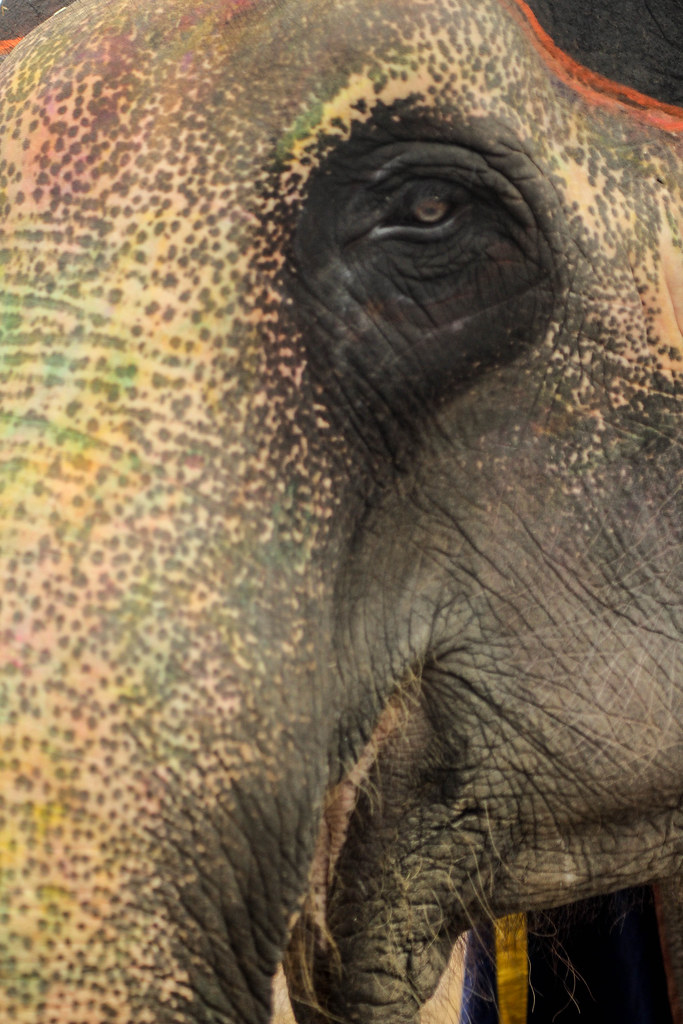 A year ago I have visited an elephant “farm”, near Jaipur and made friends with an elephant. They are such smart animals, they understand and feel the person in front of them! I remember saying different words to “my” elephant while she was doing what I was saying. I remember hugging her while she hugged me back with her trunk. Or feeding her bananas while she was more interested in my flower necklace. I actually felt a connection with that elephant. And if you read this, and you are going to India or anywhere else, don’t pay to ride an elephant! Think how much you’re hurting such an intelligent and emphatic animal! Yes, they feel that too and actually act on it, trying to comfort you if you’re sad. 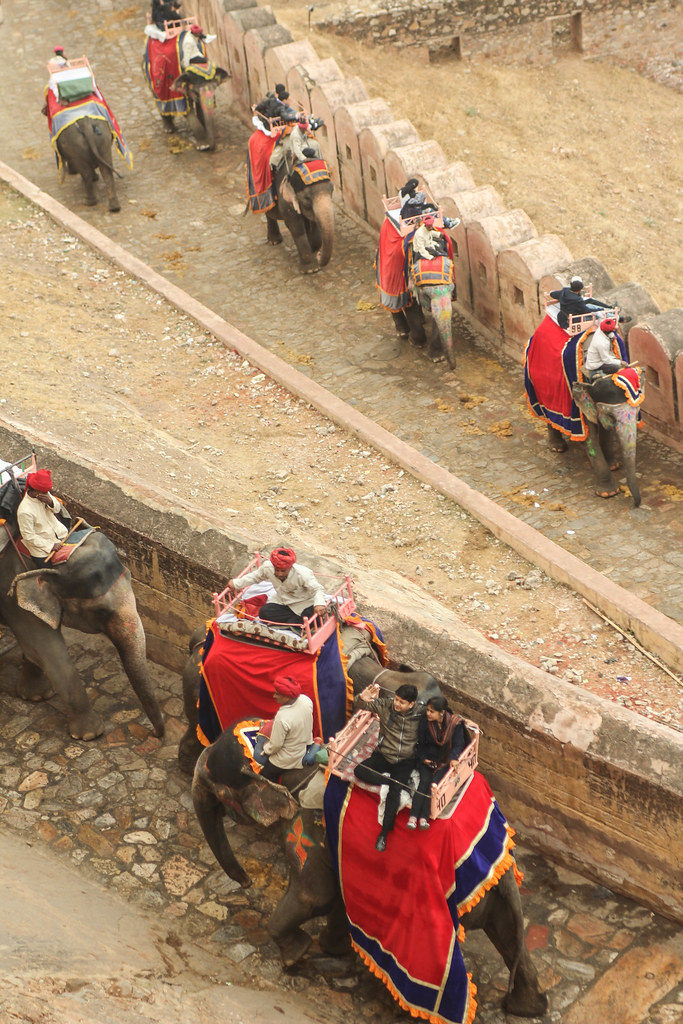 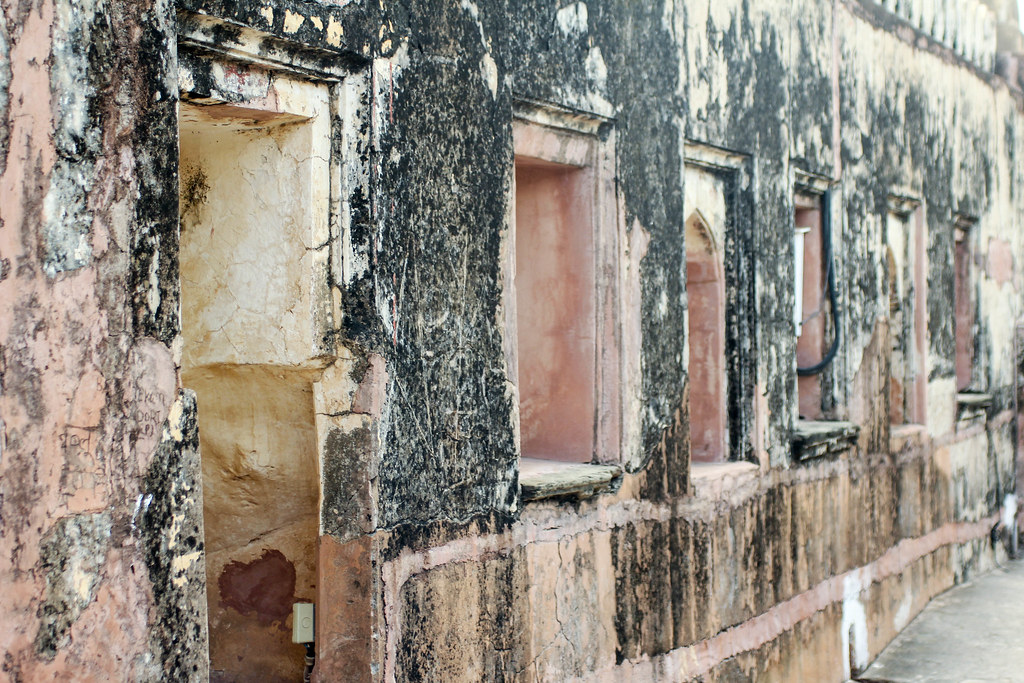 Amer Fort (or Amber fort – as tourists know it), is another masterpiece of Rajasthani architecture, built by a Maharajah for his family. The Palace is made from pale yellow, pink sandstone and white marble, and it is divided into four main sections each with its own entry gate and courtyard. It is free to visit the first courtyard, but it’s not much to see here. The most famous part of the fort is the Mirror Palace, in which the walls are covered with “paintings” made out of glass. The legend says that the queen was not allowed to sleep in an open space but she loved the stars, so the Maharajah covered the walls and ceilings in glass in order to recreate them. It is also said that if you burn two candles, the reflection would convert the small light into thousands of stars. Unfortunately it is forbidden to go inside because people kept steeling the glass, and now there is a guard whistling violently to anyone that approaches the outside walls. 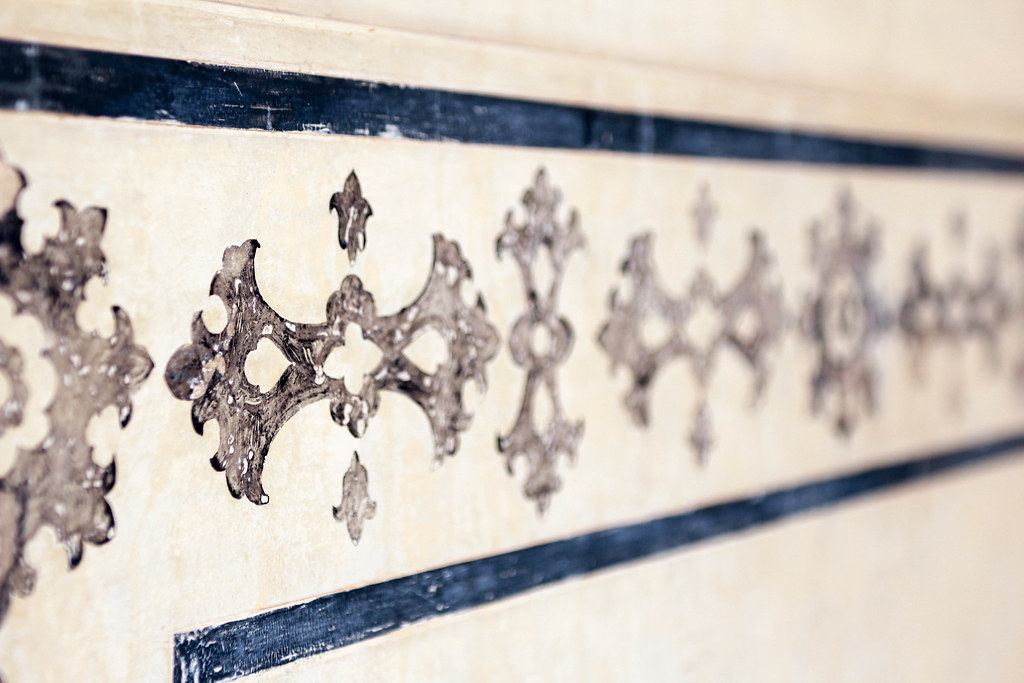 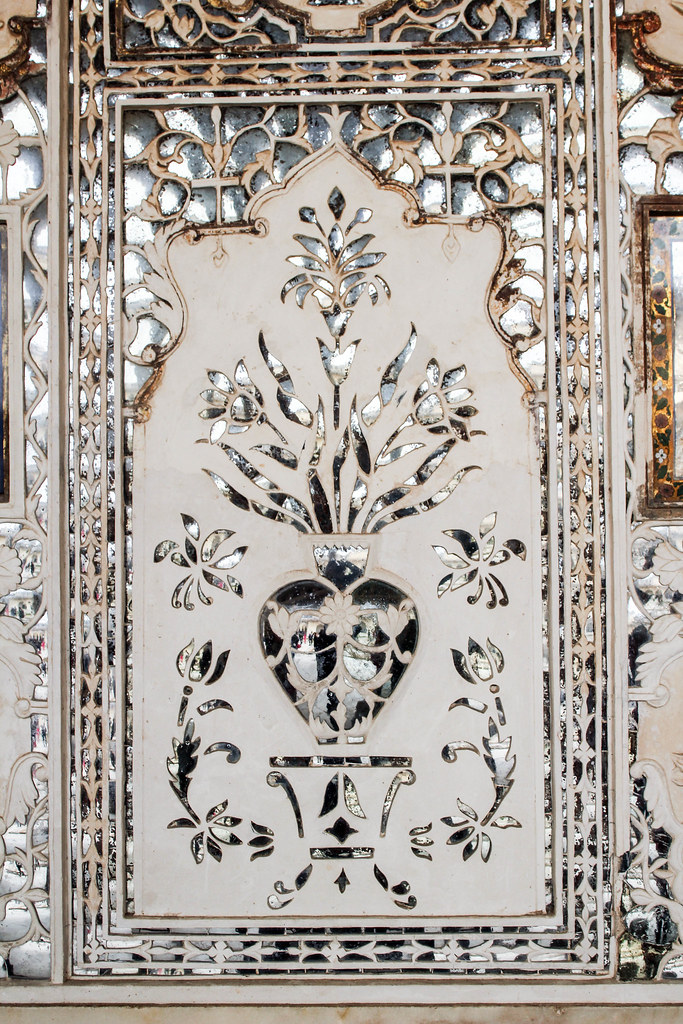 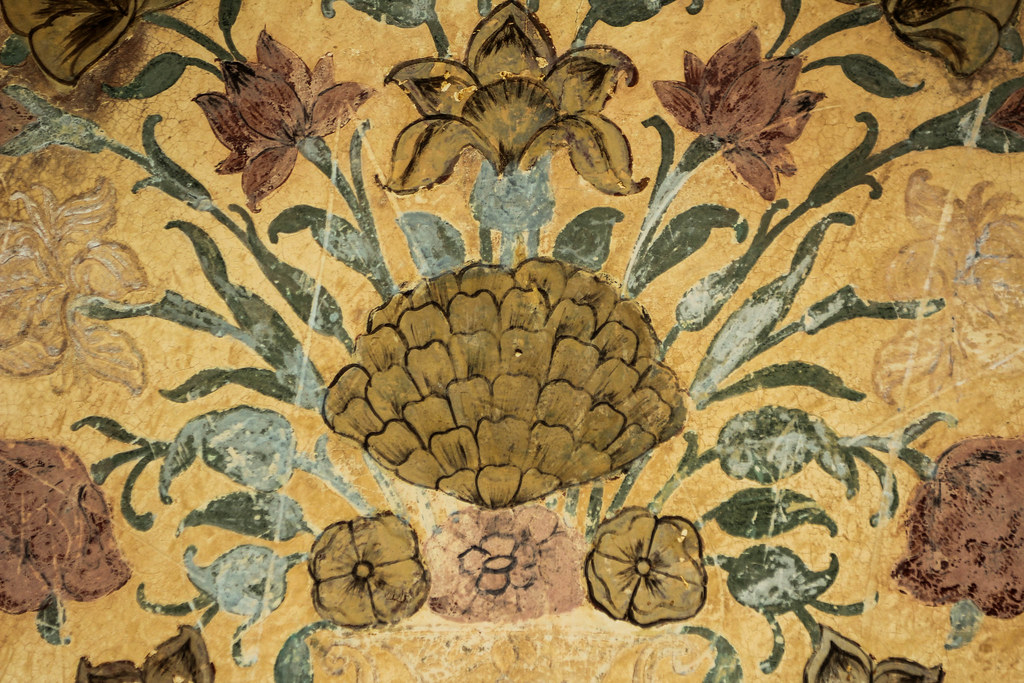 Another interesting part of the fort is “The Hall of Pleasure”, where the Maharajah built an entire air conditioned system using the force of water. This is where he would spend time with his queens or mistresses – some royalty had thousands of mistresses, but we will get to this when I’ll tell you about Agra Fort and the Taj Mahal. 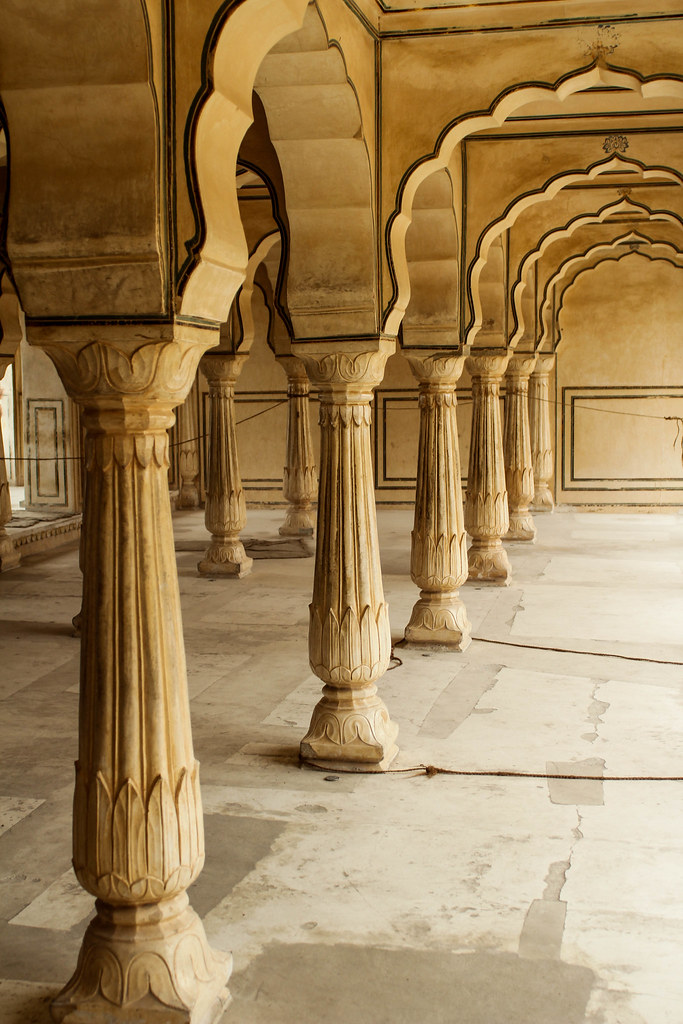 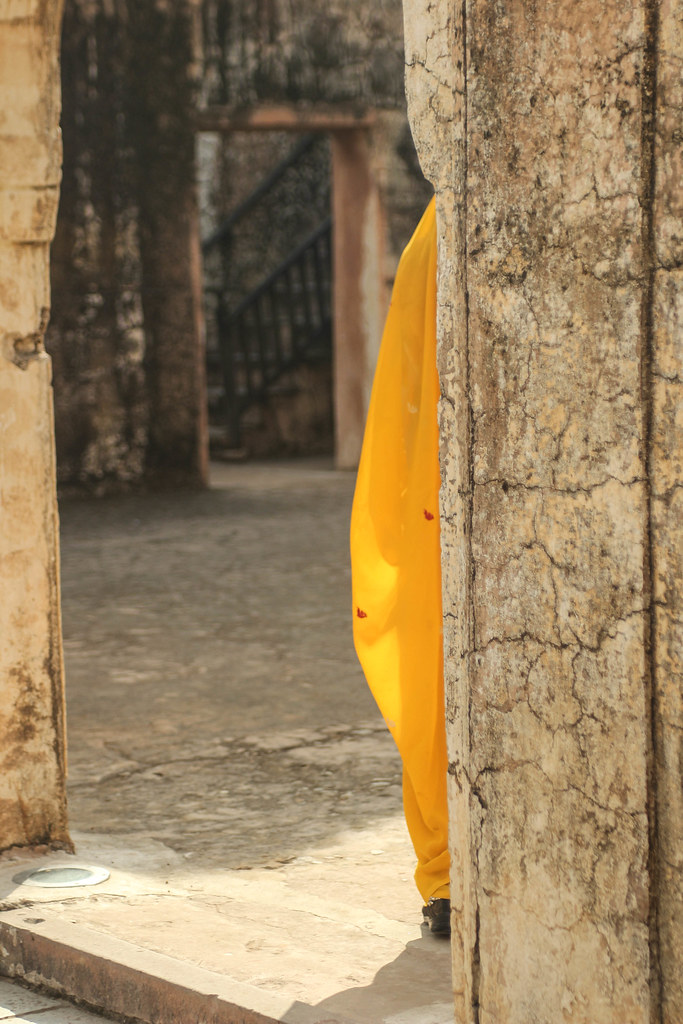 After we left the fort we sopped by to an expensive restaurant for lunch (the food was really good though) and then we visited a block painting factory. We had a lot of this kind of visits included in the trip, where people were trying to sell us overpriced fabrics. One thing I’ve learned during this trip is that every single fabric producers works with Armani, Burberry and Co. 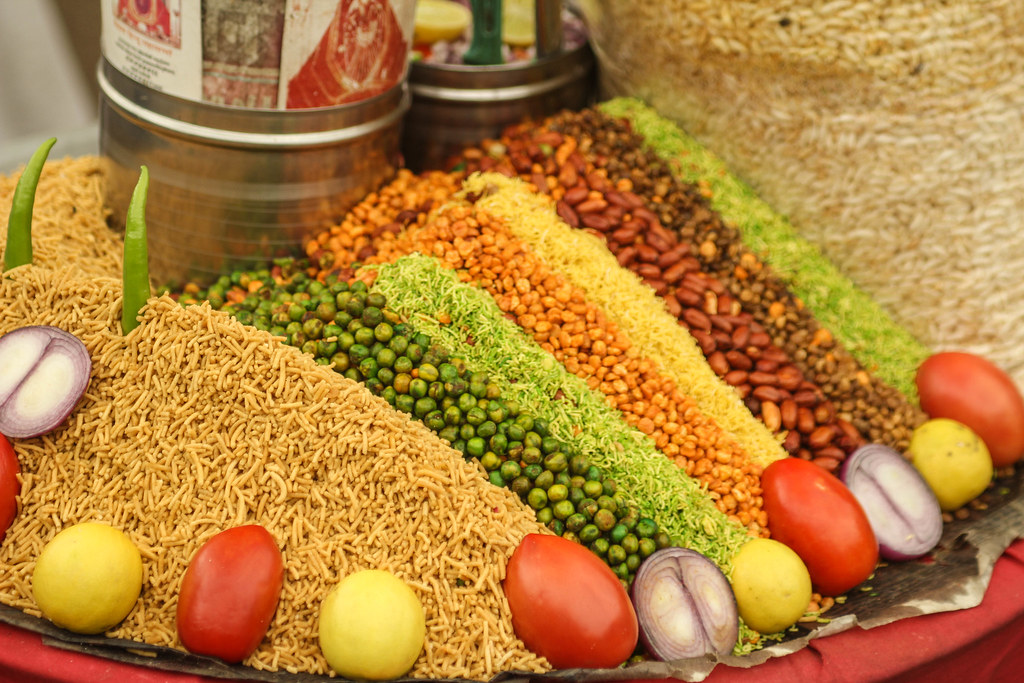 We had a free afternoon so we split into small groups and my group went to the Monkey Temple. As soon as we arrived our driver wished us “good luck” and we were left at the bottom of a big hill, with monkeys roaming around us. There was nobody around, just us 3 and it felt a bit scary. I was used to the aggressive monkeys from Malaysia so I didn’t really know what to expect. But these were all right, they seem to be aggressive only between them. At the top, where the temple was, this really sweet old lady blessed us and put red and yellow paint on our foreheads, together with a string colored bracelet. All for a small donation, of course. 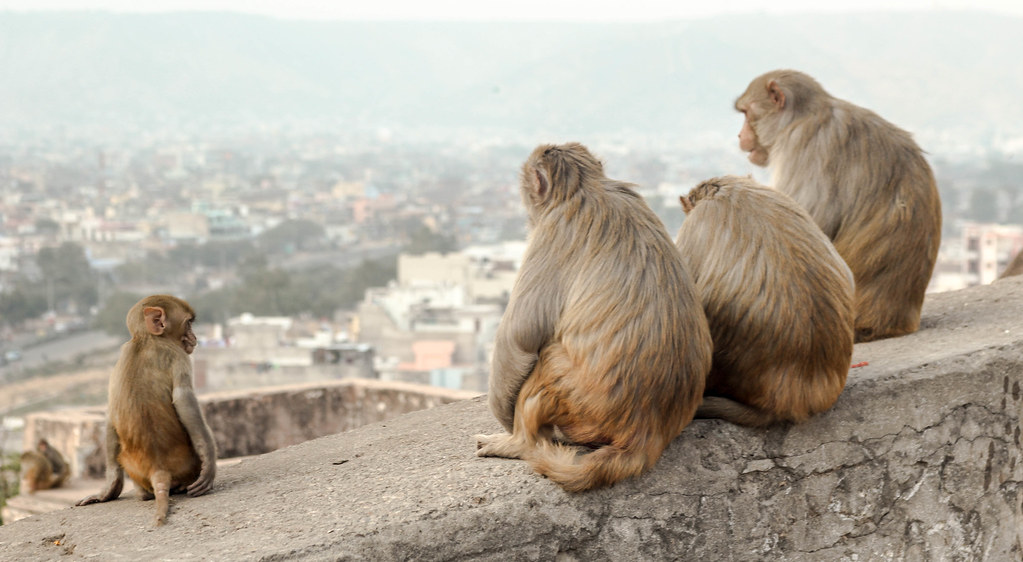 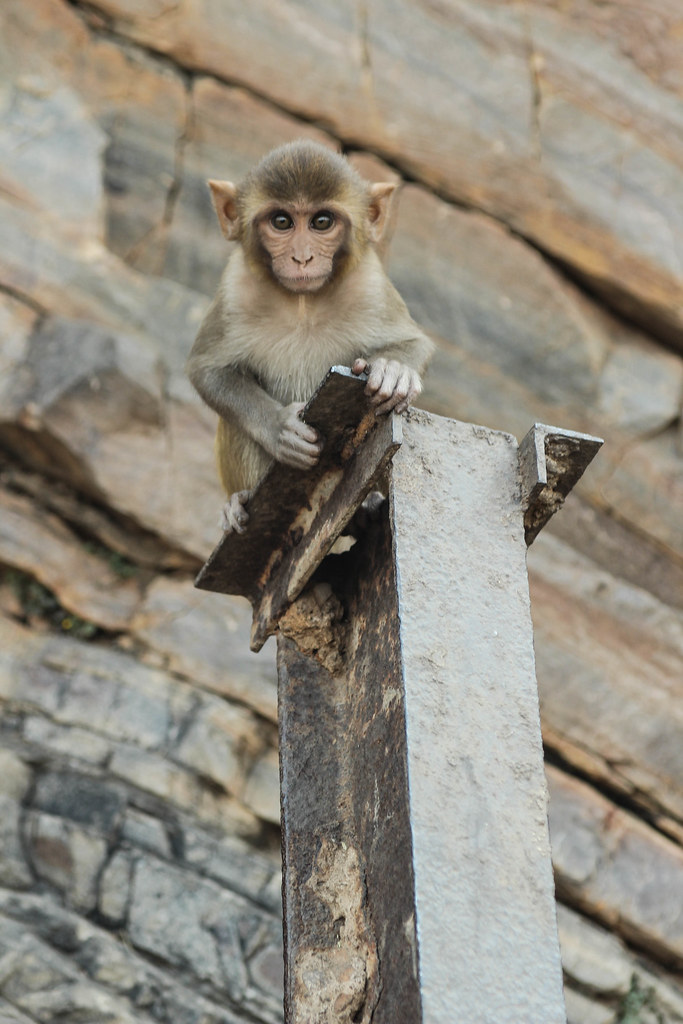 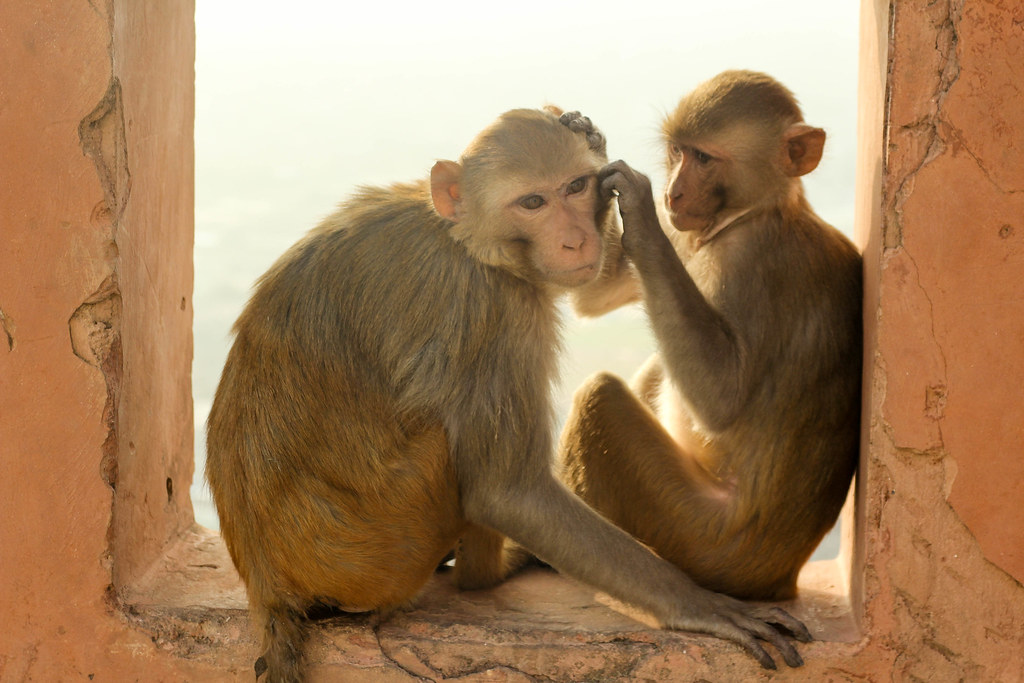 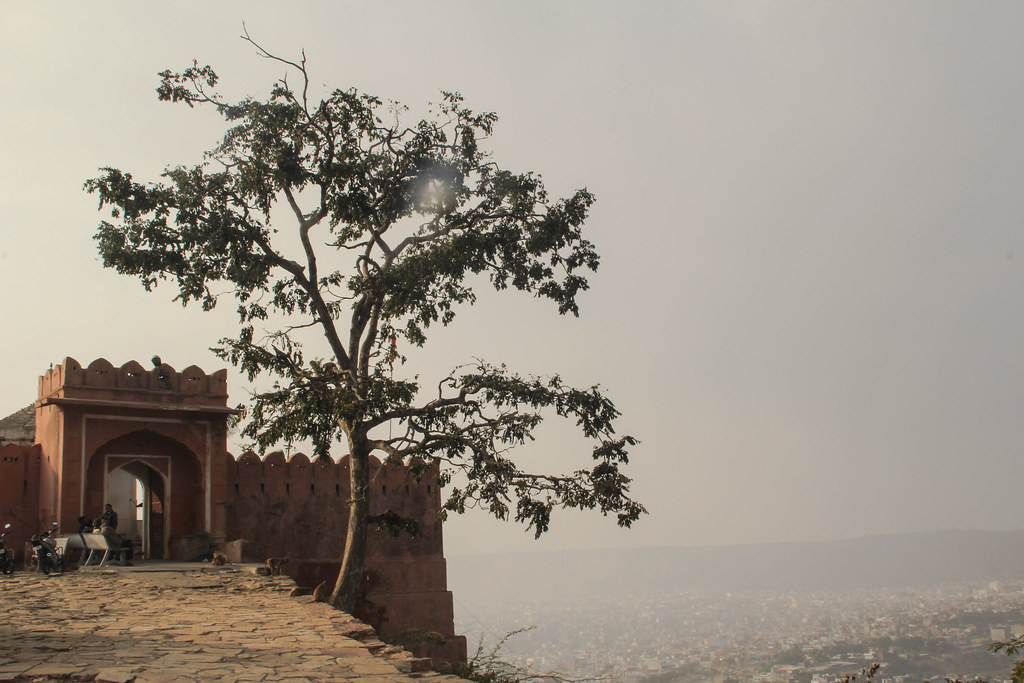 The view over Jaipur was impressive, it would stream in the horisont as much as we could see. On the way down we saw a monkey riding a pig. And it was hilarious! 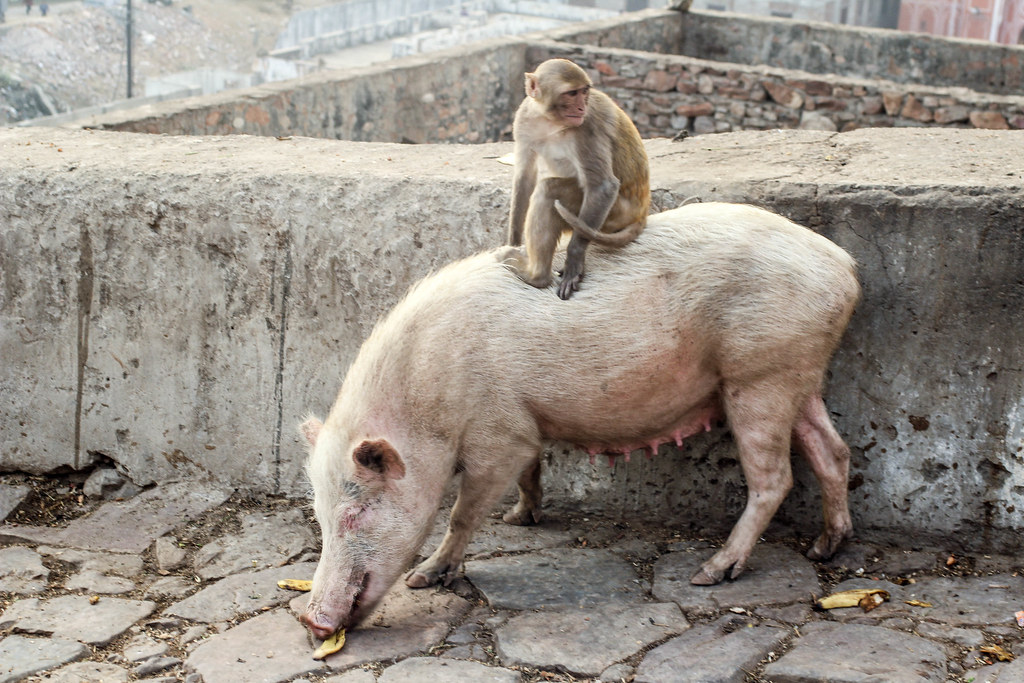 The ride back to the hotel was an adventure. It was the rush hour and oh boy, the amount of tuk tuks and horns is unbearable. We somehow managed to reach in time as everybody else and we ended the evening with a street chai, from the vendor outside the hotel. It was actually really nice, as everybody got up and let us sit on the improvised chairs (big cans or pieces of wood).

56 thoughts on “Jaipur – Spices, stunning architecture and elephants with tears in their eyes”