We had a very early start the next morning, to catch our first local train to Jaisalmer. It was still dark when we boarded the Tuk Tuks at the hotel and left for the train station of Bikaner. The town was covered in a thick fog and the temperatures was very low. I was looking forward to board the train and get some warmth. Our guide told us that this train was going to be very crowded and for our safety we will highjack the luggage compartment and lock the doors. So we did. We got on, locked the doors behind us, sat down and didn’t make any noises. It was dark inside – no lights, the windows had metal bars all around and the heavy blinds were closed. My hands got cold very fast and I couldn’t stop shivering. The chairs were very uncomfortable and the journey felt like lasting forever, even if there are only about 350 km – the train goes very slow, it took over 6 hours to arrive. Suddenly, at the horizon, we got a sight of the Jaisamler Fort, shimmering in the sun, above the city.

It was so good to get out of the train and feel the warm weather. The sun was shinning and there was no more fog. Finally, we could leave our jackets aside and wear just tshirts.

Jaisalmer is surrounded by desert so if you’d like to, you can go on a camel safari and sleep overnight in a tent, with just the stars above it. You can choose from many of the Rajasthan Tour Packages out there. We went for a hotel though because we did the camel safari in Bikaner. It was my turn to have a single room in Jaisalmer, and I received a huge room with a nice view towards the pool. We had a modest cheap lunch at the hotel and then headed over to the lake, to see the sunset. There were a lot of people walking around or rowing boats on the lake. It felt very crowded but as soon as we started to walk along side, it felt like we left the people behind. The views were stunning but, as anywhere in India, there was a lot of dirt and a lot of cows roaming around too. 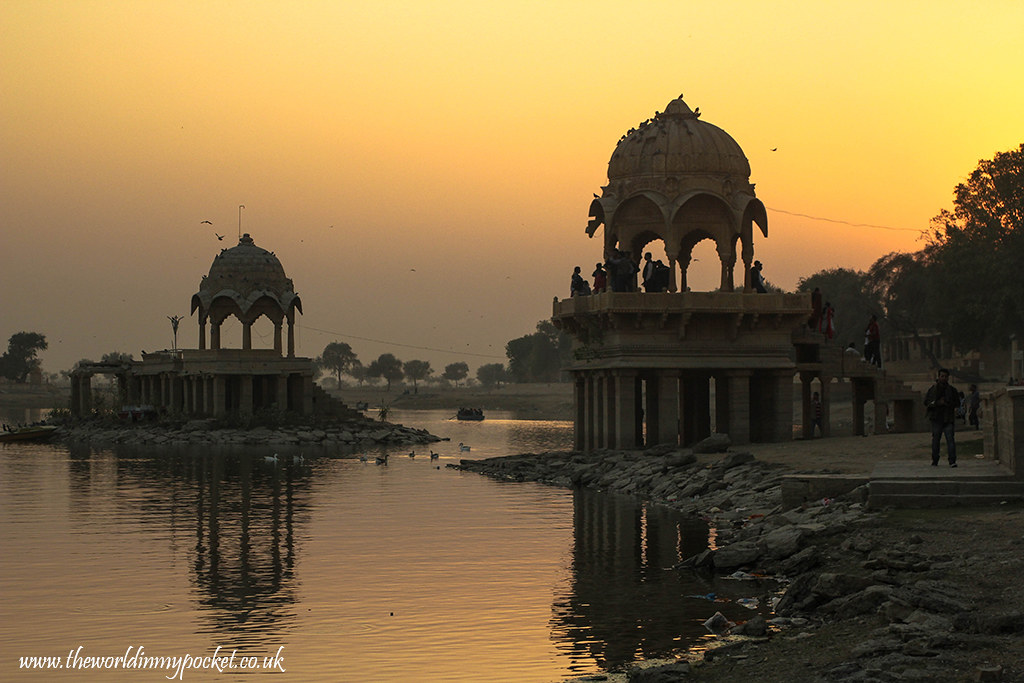 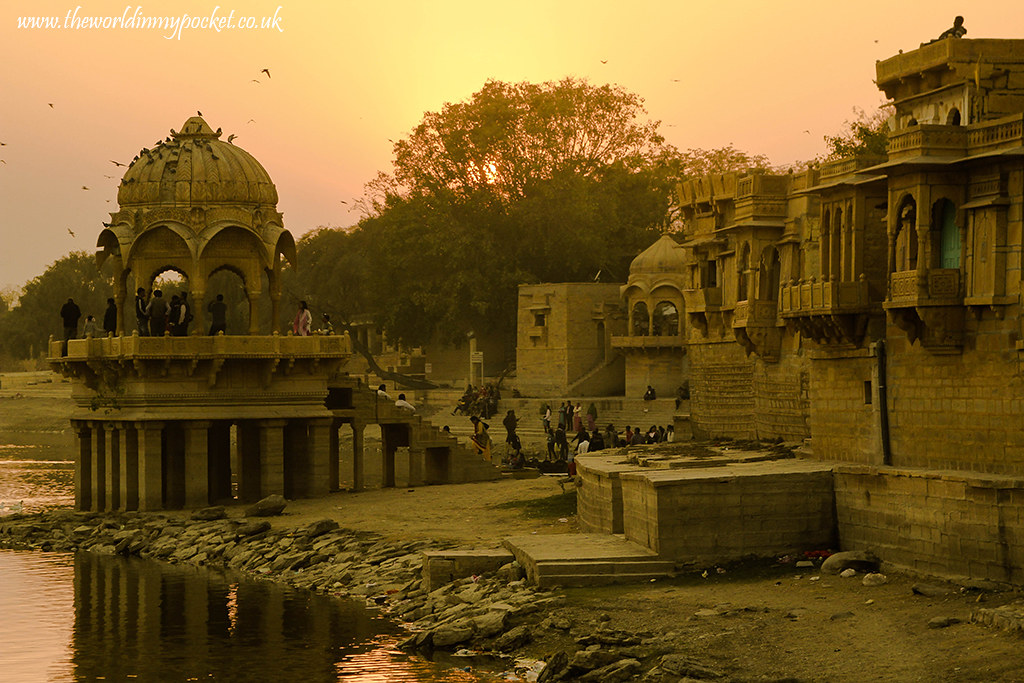 Near the lake there was a special cemetery, a place where priests were building their graves and then when they felt they were abut to die, they used to be berried alive by choice. On top of the hill looking over the cemetery towards the fort we had a cup of hot chai and then we wondered around a little bit until we returned to our Tuk Tuks to go to dinner. 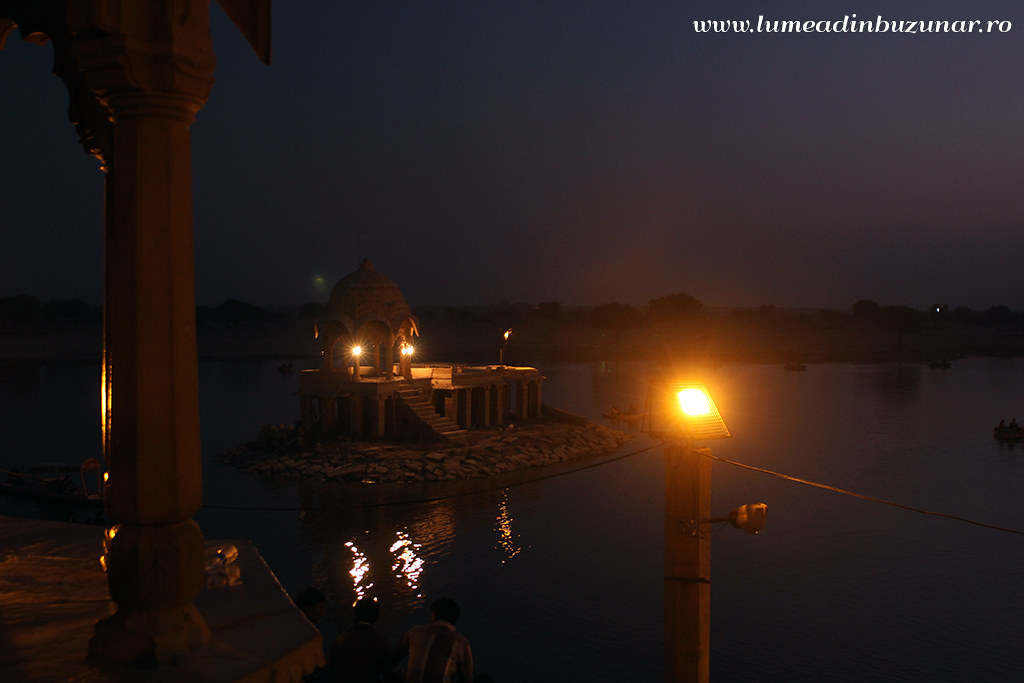 We were taken to a beautiful haveli for dinner, right at the entrance of the fort – Nachana Haveli, Saffron Restaurant. A big table was set for us on the rooftop while a young boy and his father were singing folk Rajastani songs for us at their traditional music instruments. I had an exceptional Bharwa Aloo curry (stuffed potatoes with paneer, nuts and spices) followed by a very well made sweet lassi. I have to say that this was one of my favorite experiences along this trip. Because during the first trip in India I got sick eating chicken, this time I chose to eat only vegetarian dishes – and there is plenty to choose from, as North India is mostly vegetarian. 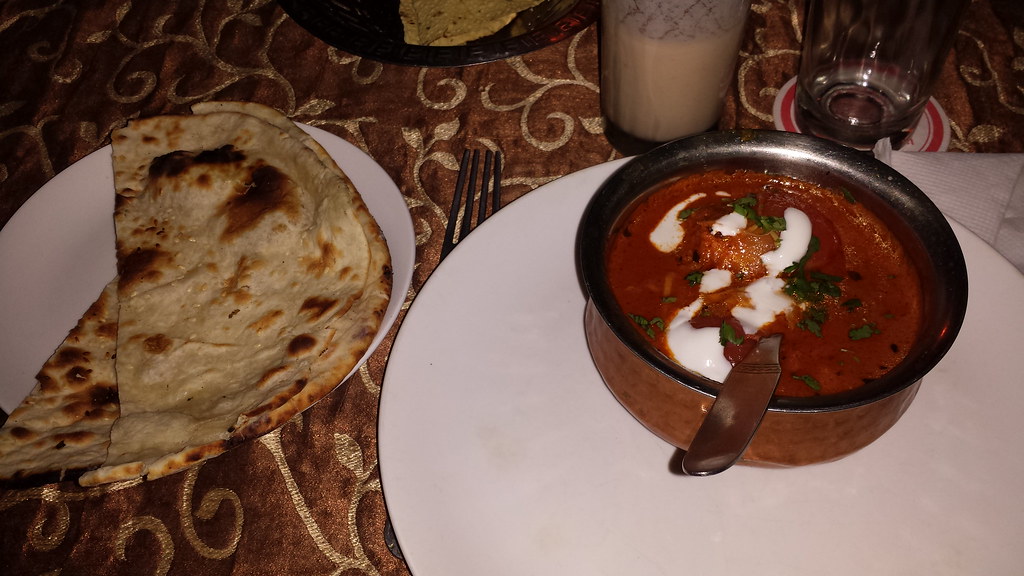 Back to the hotel I enjoyed the privileges of having hot water and crashed, after a very long day. 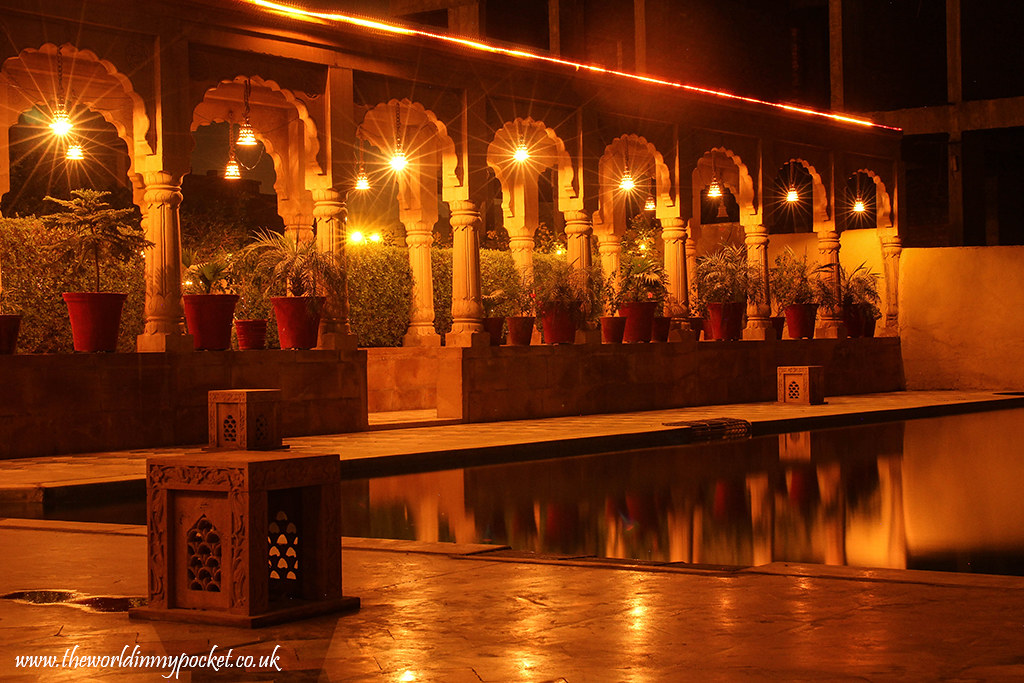 The morning greeted us with more sunshine. After breakfast we headed back to Jaisalmer fort, this time with a guide, to visit it and find out the story behind it. You need to know that in Rajastan, all big cities have a fort. Each of them is different though and has a different story. 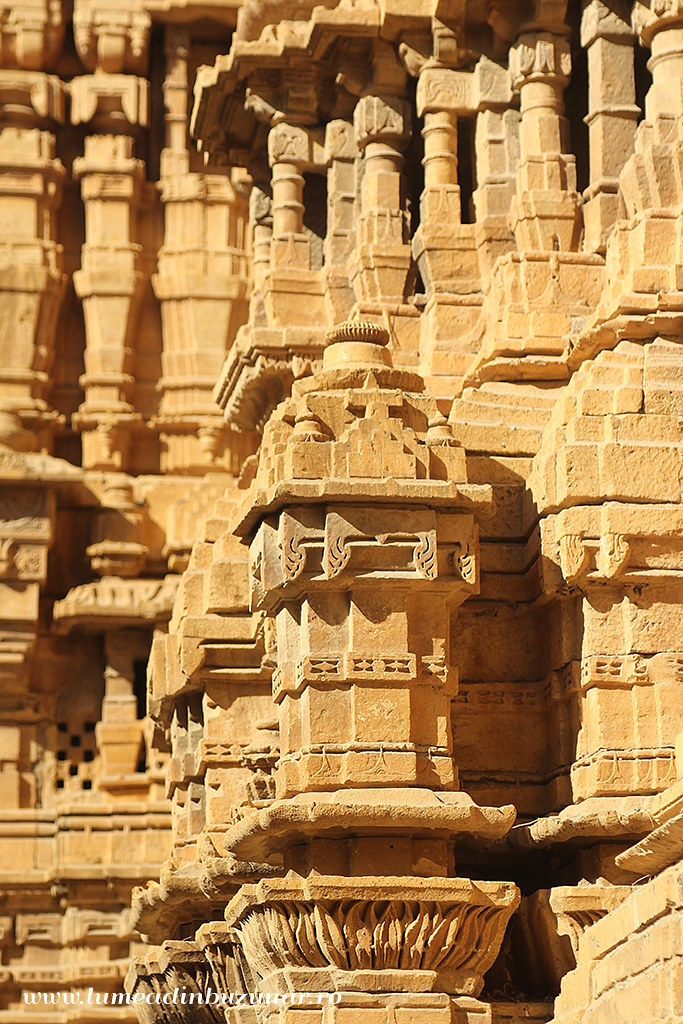 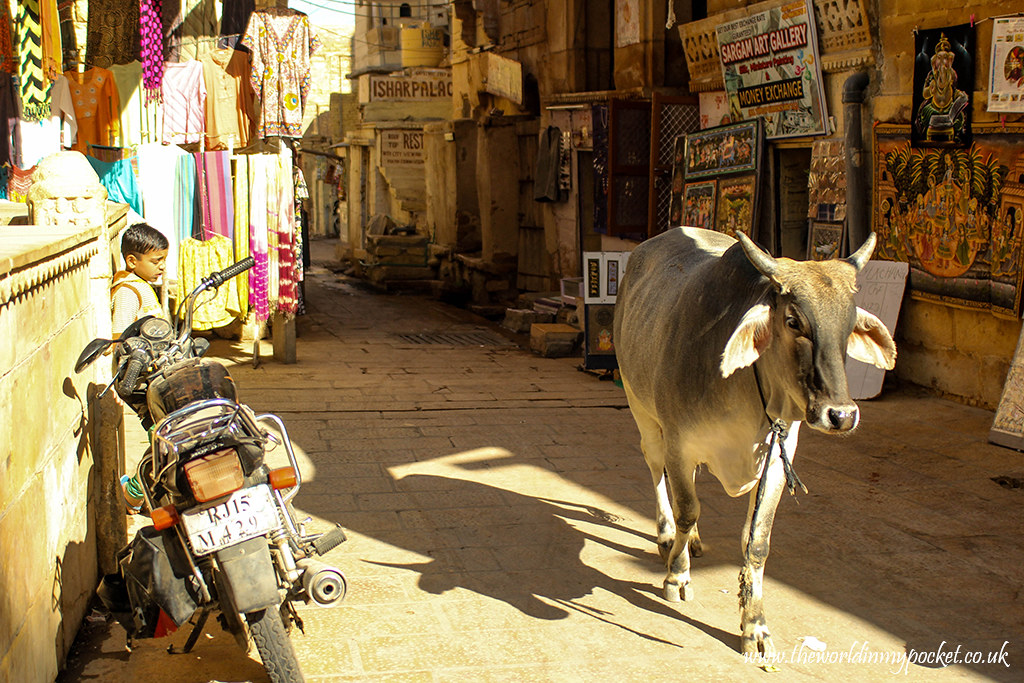 Firstly, Jaisalmer fort is made out of yellow sandstone walls which get a golden hint during the day, fading to honey at sunset, camouflaging into the desert. That’s why Jaisamler is also knows as the Golden City. In the past, the fort had a major role on the trading route and even today, the narrow streets are full of vendors trying to sell scarfs, clothes, shoes and jewelery. This is actually the only fort where people still live in and while visiting you can observe their daily life. Here, a woman is sweeping the stairs of her house; there, a child is playing underneath the freshly washed bedsheets; on the other side a man is rushing on his moped, carrying crates; across the road, another man is painting a Hindu god. 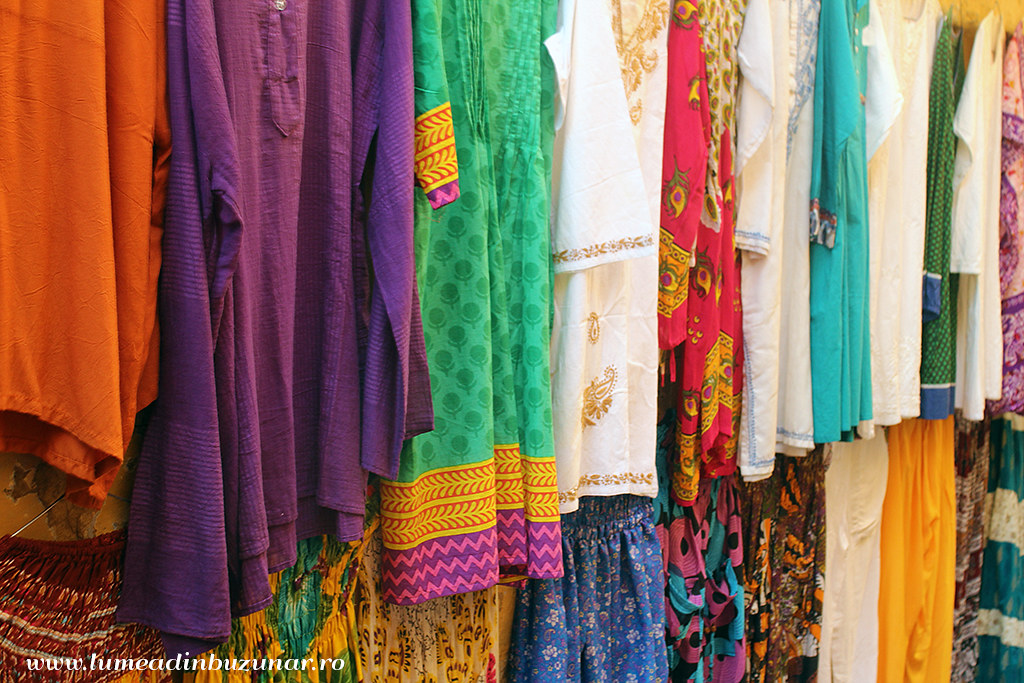 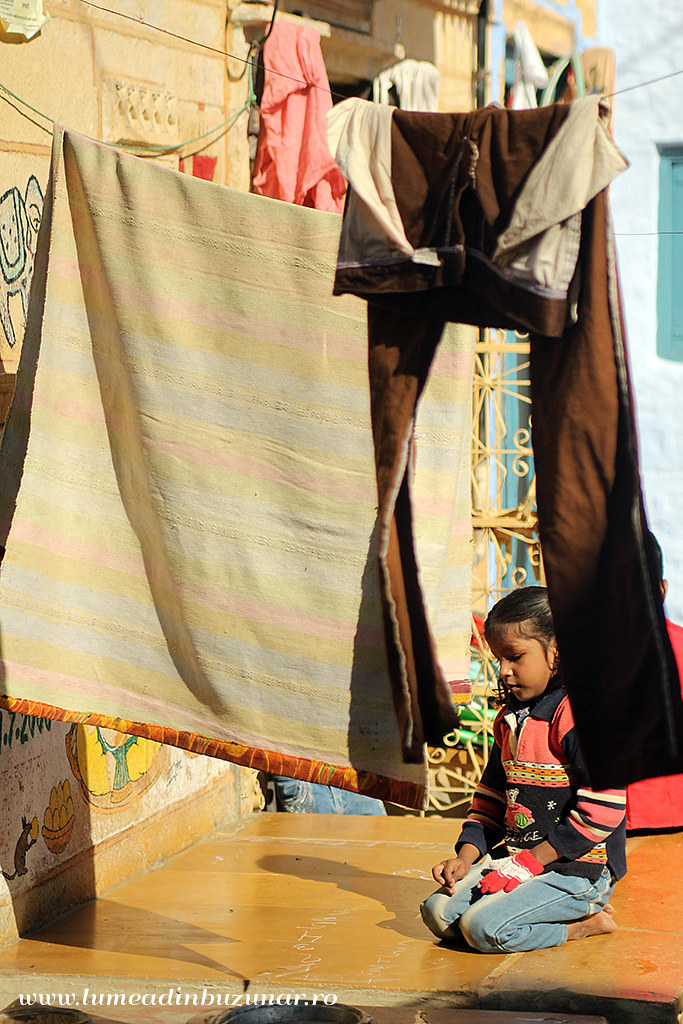 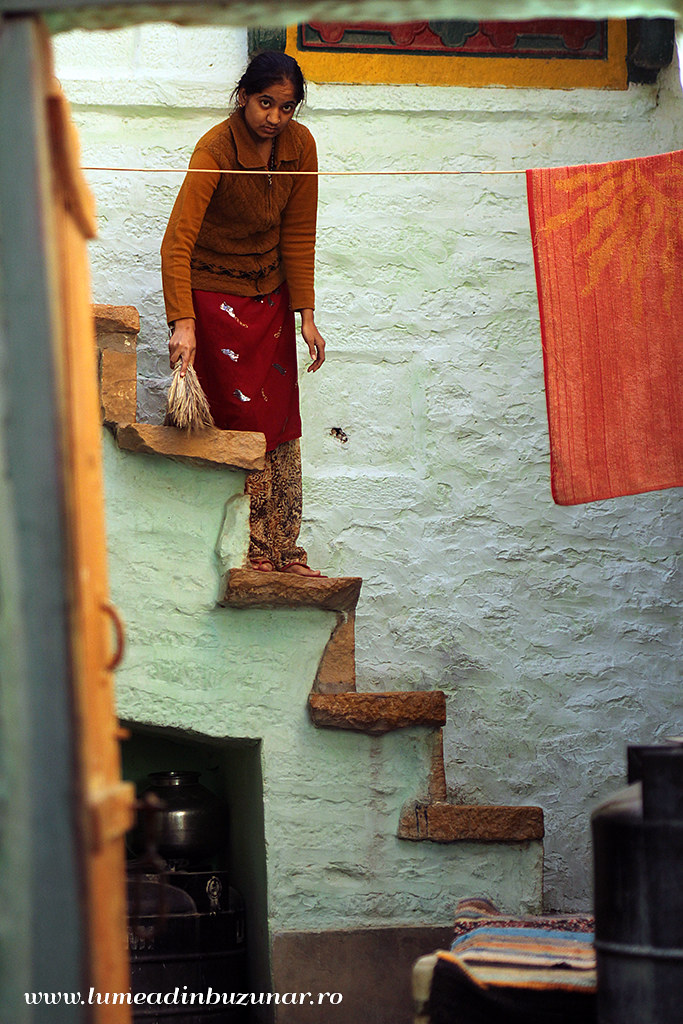 At the end of the tour, after the usual stop at the local guide’s friends’ textile shop, we get in front of the majestic Patwa Ki Haveli, where all of a sudden we began a tourist attraction for the locals. Everybody was photographing us, like we were some sort of VIPs. The guide told us that they are local people that haven’t seen Caucasian people before and that’s why. 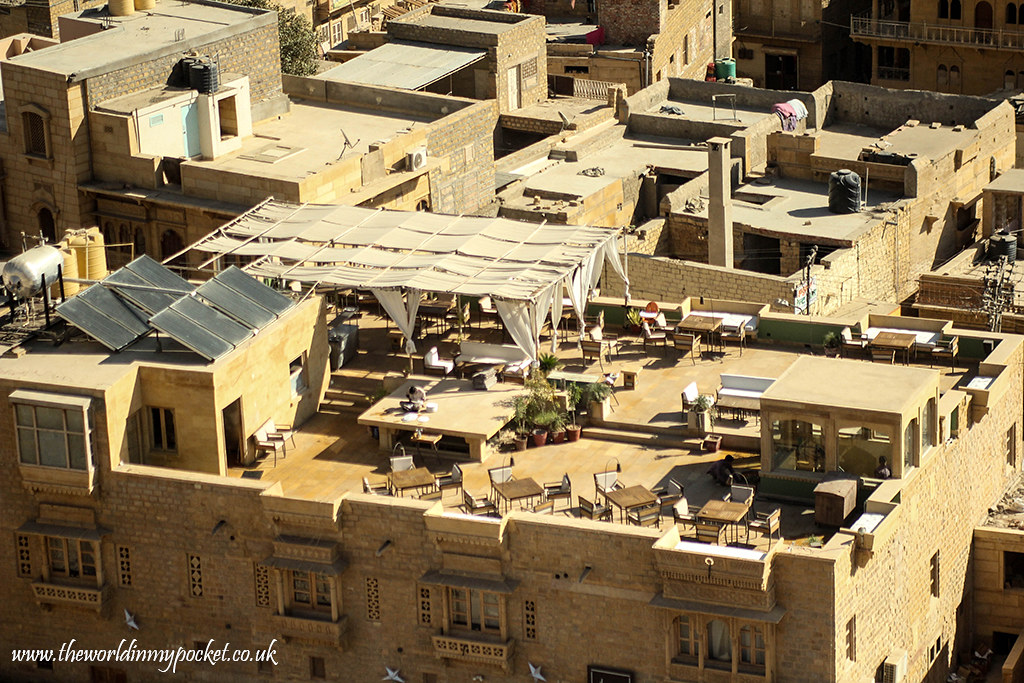 At lunch we had Thali, a north Indian meal that consists of more dishes on a big round tray. A typical Thali includes Dal (lentils curry), vegetables, curd, pickle and rotis or chapatis, together with a sweet. You usually eat it with your hands, using the bread as a spoon. 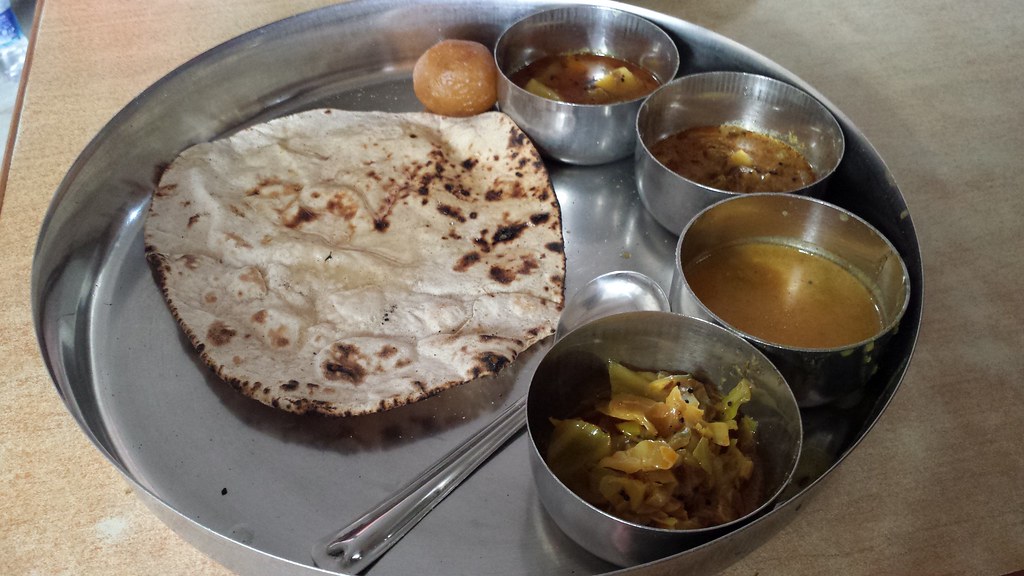 After lunch we had free time to explore the town, so we divided into smaller groups and get lost into the narrow streets of Jaisalmer. 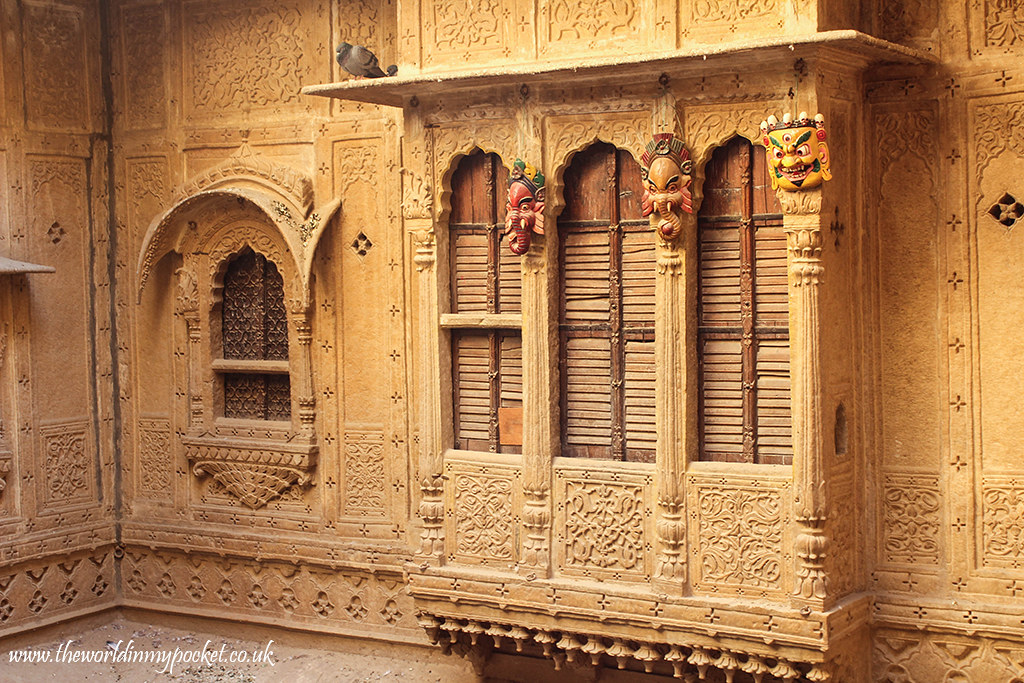 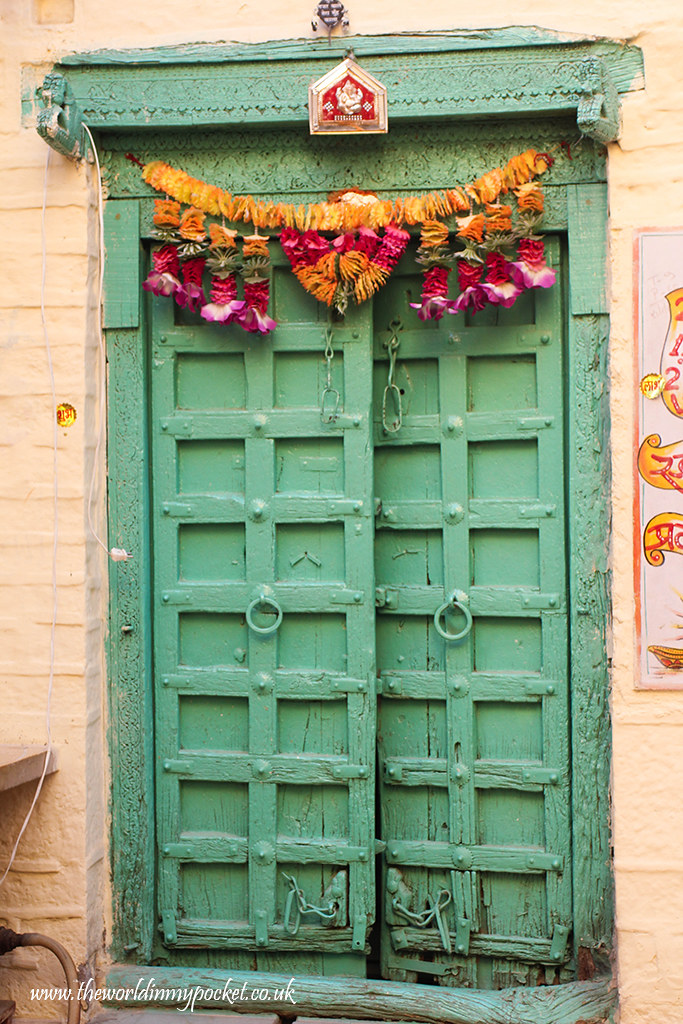 People are friendly with tourists, they ask where you are from and then they invent an aunt or uncle that lives in the same country as you. They have visited London, Paris, New York – hoping that you will buy something from them. Not this time tough. 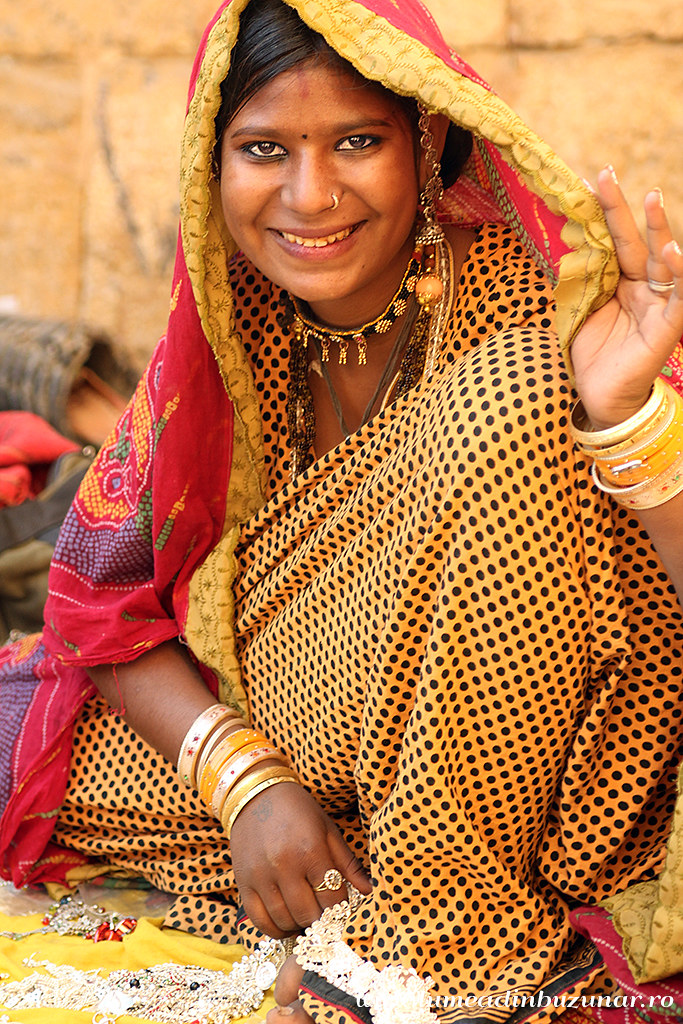 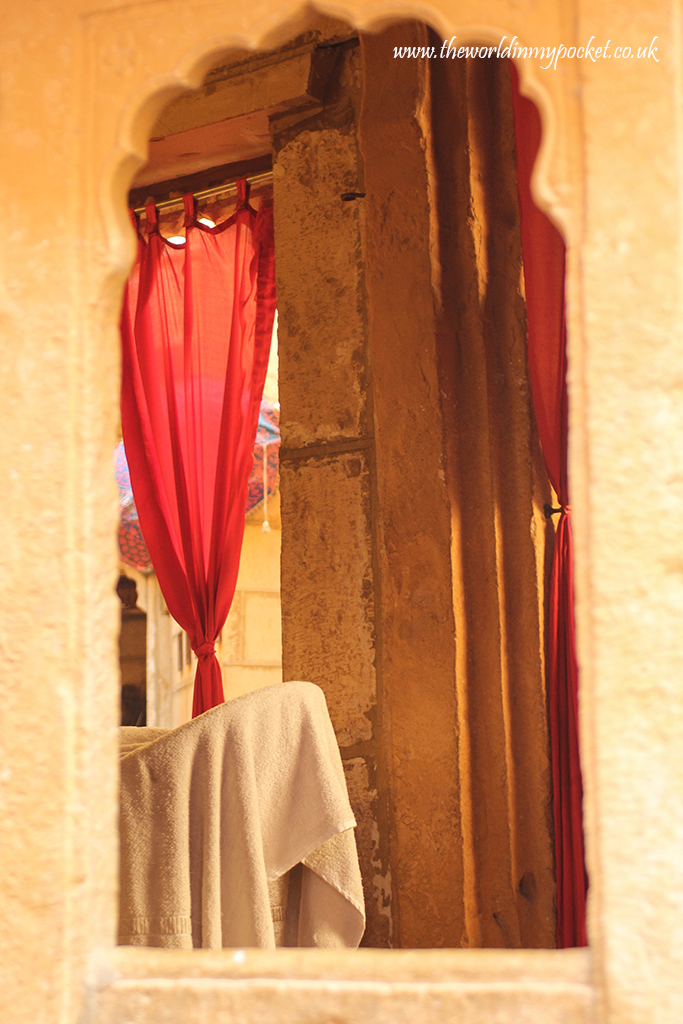 Most of us decided to meet back on the roof of Saffron Restaurant, where we enjoyed a well-deserved beer while watching the sunset change the yellow of the buildings into gold. 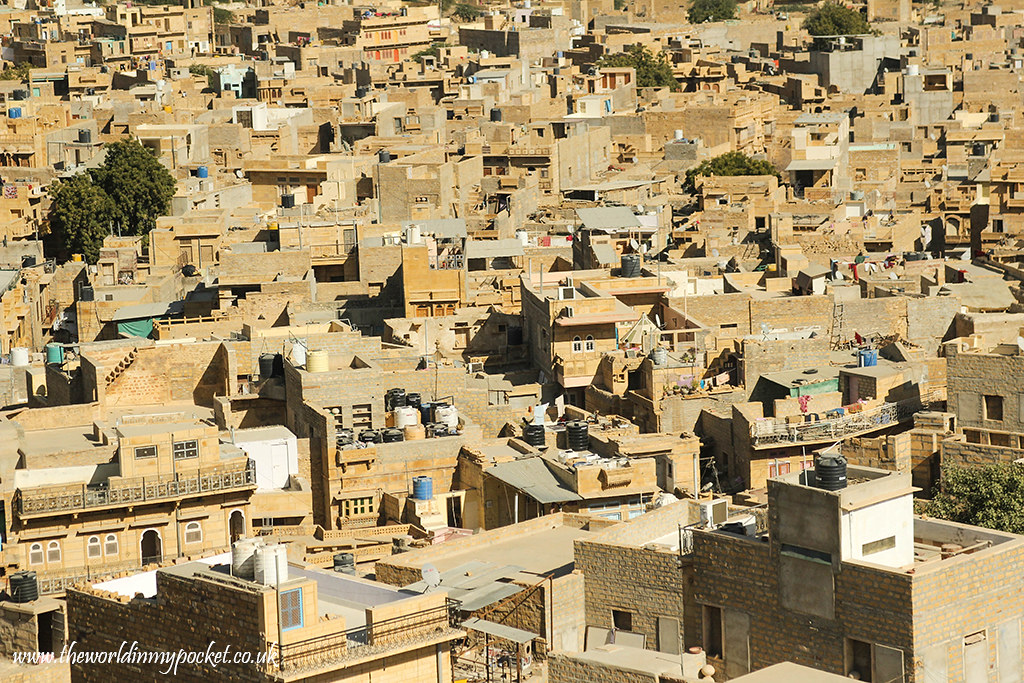 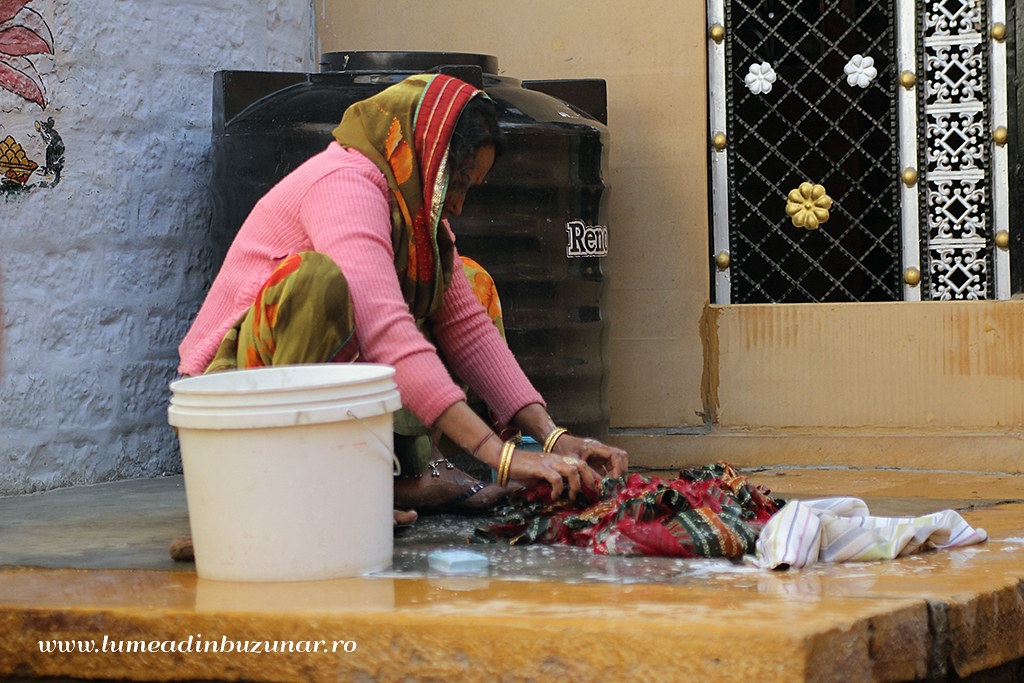 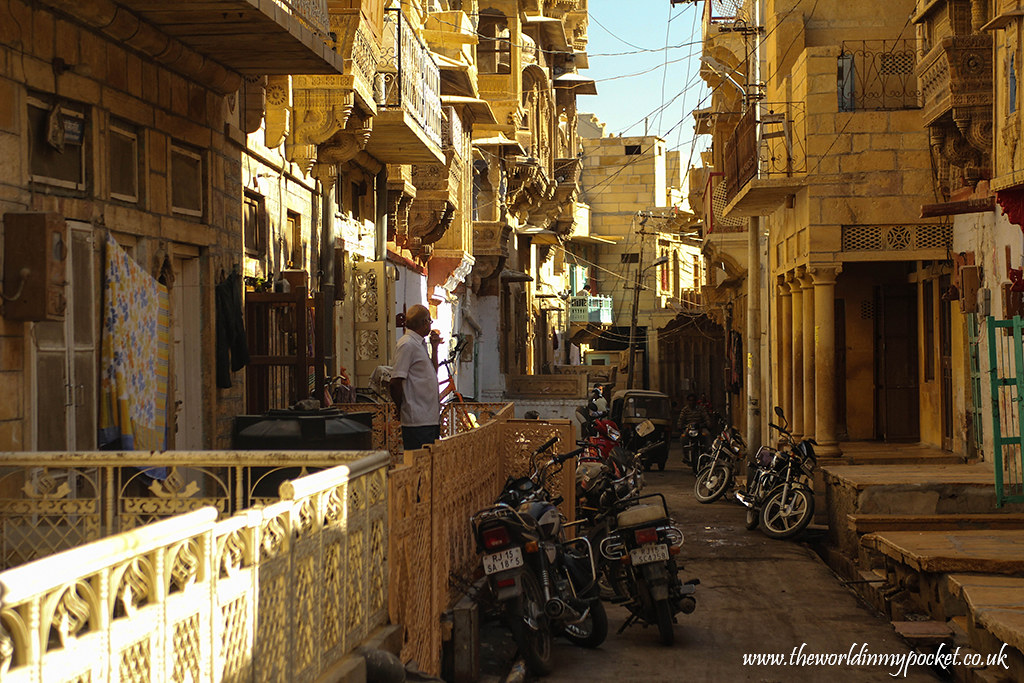 45 thoughts on “Jaisalmer – The Golden city”