Whitstable is one of the prettiest seaside towns in Kent, famous for its beautiful beach, charming old town and fresh seafood, and it’s close to London. In summer, many people choose to come on a day trip to Whitstable to enjoy the sunshine by the sea. There are plenty of things to do in Whitstable, whether you are looking for a relaxing trip, a foodie escape, or an active holiday. However, Whitstable is suffering from over tourism, which can spoil the visiting experience because of the large crowds, which sometimes makes even walking on the promenade a challenge.

Whitstable and Over Tourism 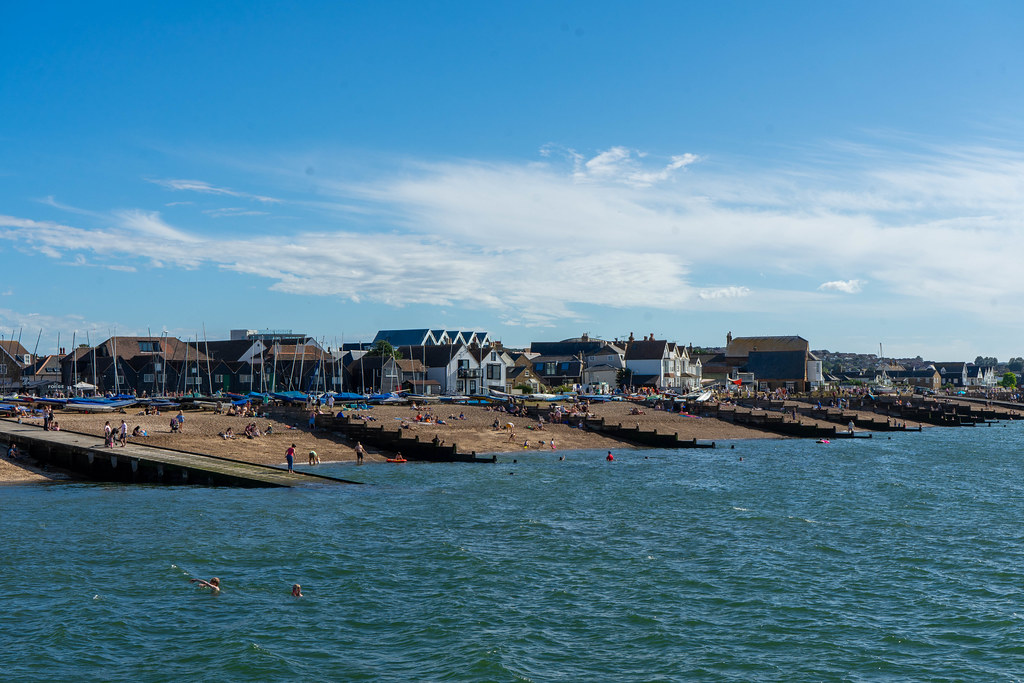 I visited Whitstable at the beginning of August, on a mid-week getaway. On my itinerary for that day, Botany Bay was my first destination, as it was further away, and I left Whitstable for the afternoon, taking into consideration that my hotel for the night was nearby.

As I was driving along the A299 towards Botany Bay around 11ish, I noticed the very long queue of cars which had practically stopped on the slip road, waiting to take the Whitstable exit. That’s when I realised that visiting Whitstable during the summer holidays, even on a weekday, wasn’t the best idea.  And I was right. When I returned that afternoon, I discovered a small town filled with day tourists, packed beaches and streets too crowded to be able to walk along comfortably.

Whilst Whitstable is a gorgeous small seaside town definitely worth visiting, I wish I had put better thought into making my trip here more responsible, because too many tourists not only hurt the town and its residents, but also spoil its charm. The more people that visit a destination lowers the quality of the experience. This is how the idea of this responsible travel guide to Whitstable was born.

How to Get to Whitstable 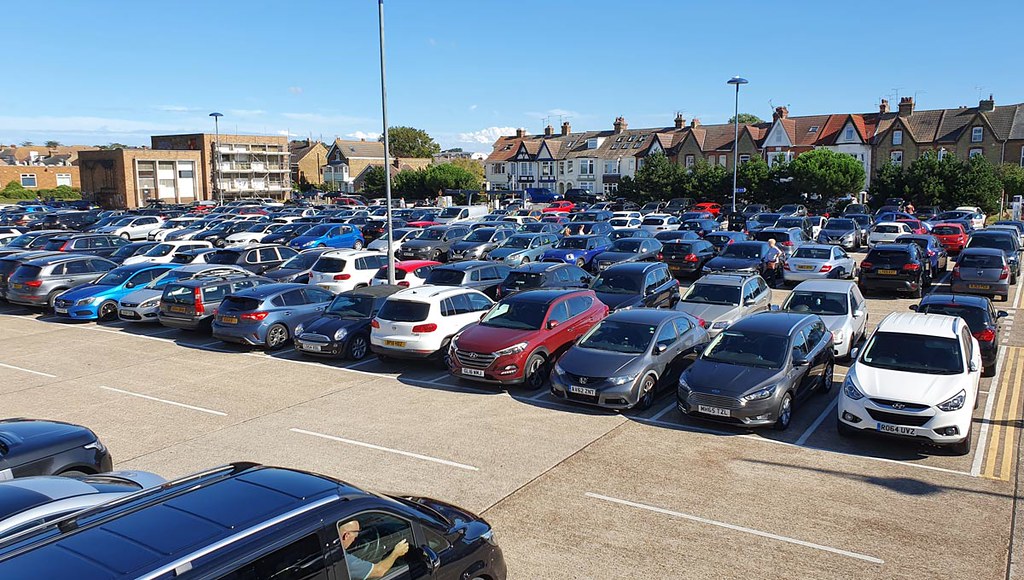 The best way to get to Whitstable, in a sustainable way, is by train. From London, there are hourly direct trains leaving Victoria and St Pancras stations, reaching Whitstable in less than one and a half hours.

If you are travelling with family or friends and choose to drive, keep in mind that Whitstable is a small town, with narrow streets and lanes.  Do NOT park in front of residents’ homes. There is a large car park opposite the harbour, with reasonable prices. I liked this car park because I didn’t have to pay upfront. The system reads your number plate and you pay on your return. If you travel in season, it costs £2/hour. Out of season (October to March) the fee is £1.40/hour.

Things to Do in Whitstable, on a Responsible Trip

Visit Out of Season 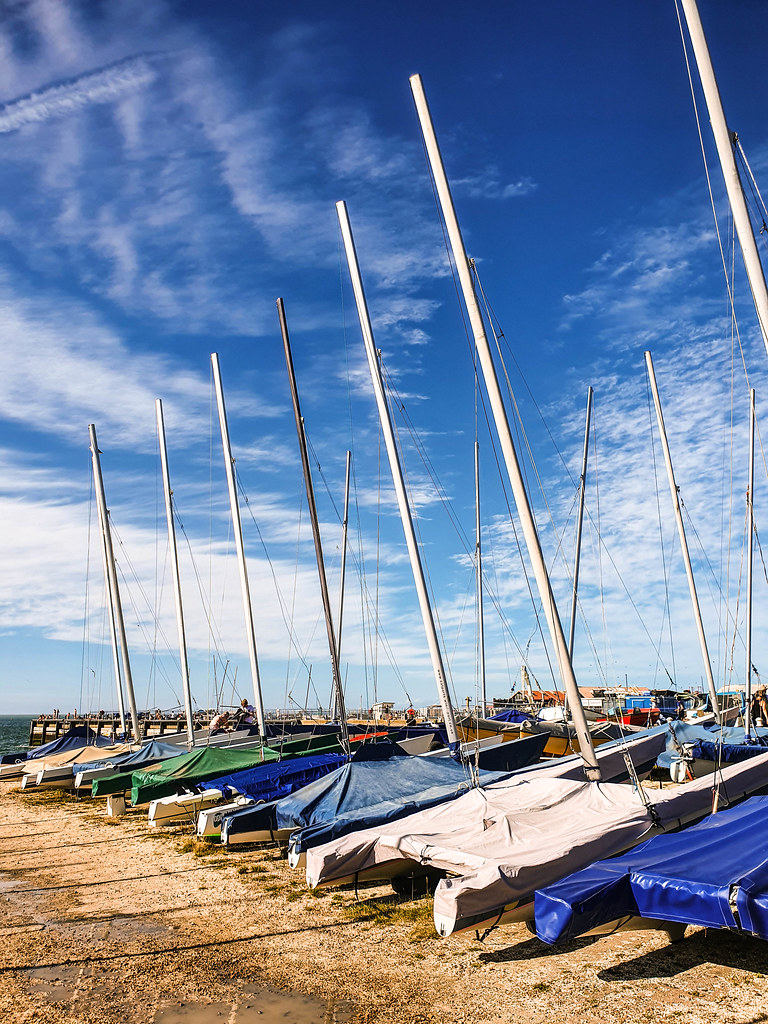 I’m not saying don’t visit Whitstable because of the over tourism. I’m suggesting that you choose the timing of your trip wisely. Instead of coming to Whitstable in summer, during the school holidays, or on a sunny weekend, consider visiting this beautiful Kent town out of season. Spring or autumn have plenty of sunny days that will make your visit as beautiful as in summer. The only difference is that you won’t want to swim, but hey, have you ever in England? Even in the middle of summer I find the water way too cold to get into.

Another great advantage of visiting Whitstable out of season are the oysters, one of the major reasons that foodies come here. The Whitstable native oyster season doesn’t start until September and only lasts until April. 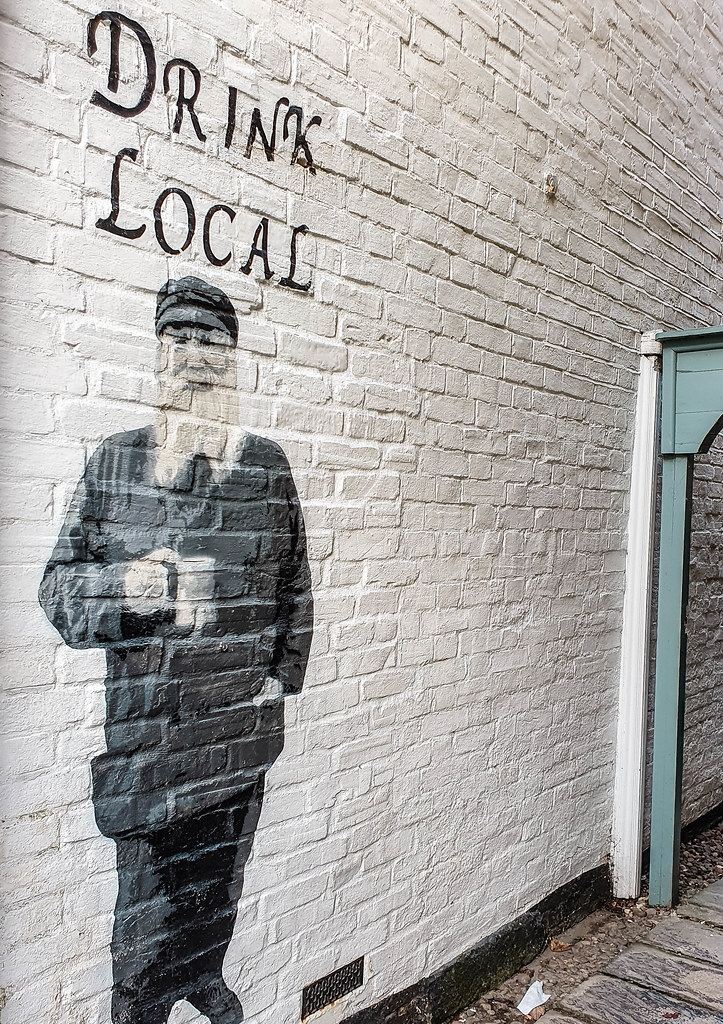 Many of the people who visit Whitstable are coming here on a day trip from London. To support the local hospitality sector, consider spending at least one night in town. However, make sure that you choose a responsible accommodation option and not an Airbnb for example.

Before you ask, there are so many issues with Airbnb and how it affects the locals’ lives, that I will never recommend it as a responsible accommodation. Whilst Airbnb drives the prices of accommodation down, it also steers the property costs up, making houses more expensive for locals to buy. Because of Airbnb, Venice has become an empty town, with almost no residents left at all. Out of 14,612 households in Venice, in 2019 there were 8907 Airbnb listings!

Instead of booking an Airbnb, stay at a local B&B where you can enjoy the hospitality of the owner, have a home cooked breakfast and get insights about the town from a local. Or, go for a serviced apartment/house, a form of regulated accommodation which respects the local laws, adhering to the hospitality standards, and minimising the disruptions of the residents.

There are a few small hotels in Whitstable as well, should you prefer the comfort of a private room with housekeeping, room service, security and 24 hours reception.

Before you book, just think: is my chosen accommodation taking any long-term accommodation off the market? I usually book all my hotels on Booking.com, as I can find so much information and reviews of the hotels I’m interested in there that can help me decide on which to choose. 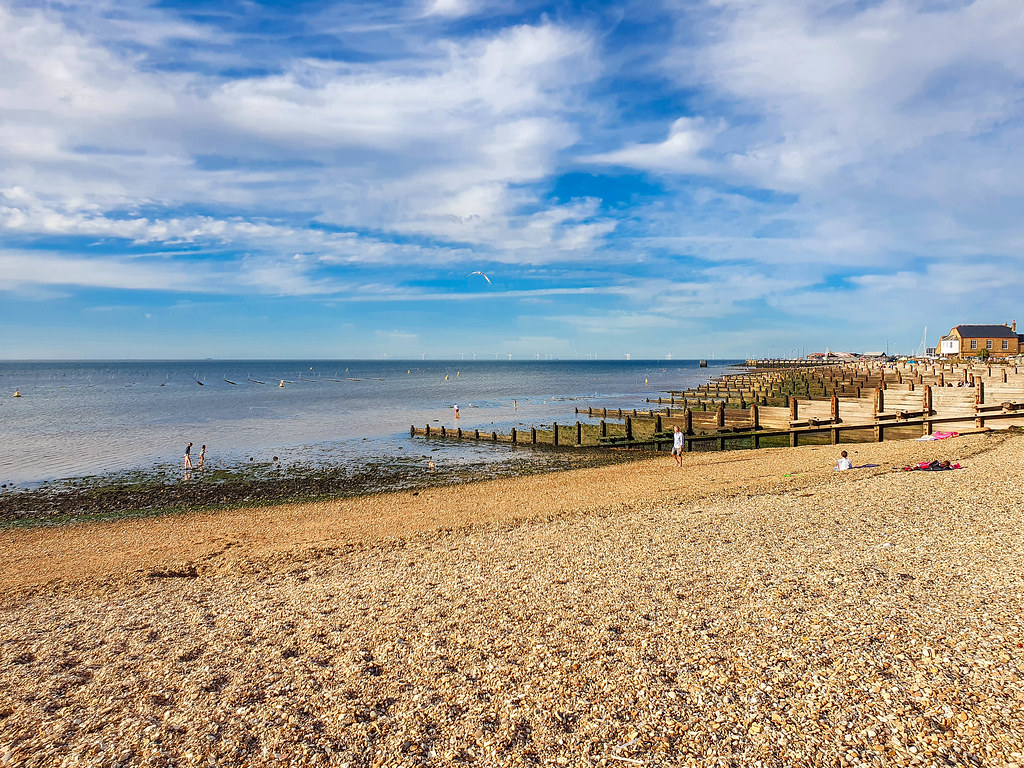 Whitstable beach is, like many other English beaches, covered with pebbles. However, it’s still lovely to take a bit of time and relax under the sun, while listening to the sound of the waves crashing into the shore. The further away you walk from the harbour, the emptier the beach is going to be.

Once you pass the Old Neptune pub, even in high season when I visited, there were barely any people on this stretch of the beach.

The beach at Whitstable is divided by groynes – wooden structures built perpendicular to the shore to reduce the longshore drift and trap sediments to protect the beach from being washed away. If it’s windy, they make perfect windbreakers for when you want to sunbathe.

Soak up the Coloured Views of the Harbour 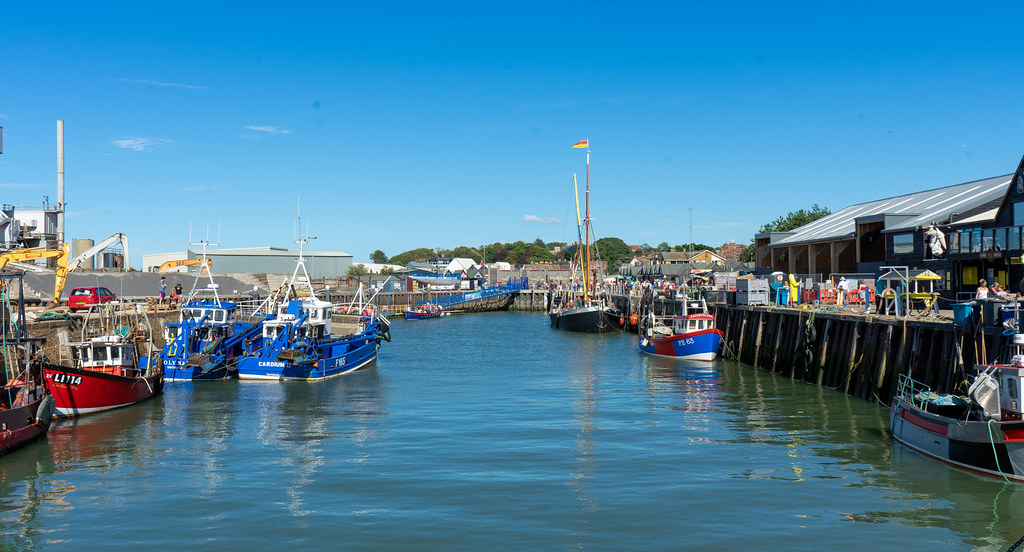 Whitstable has one of the most colourful harbours I have ever seen in England. As it is still a working harbour, expect to find plenty of colourful boxes used to store the fish from the morning catch of the day, ropes and buoys and plenty of fishing boats. Don’t miss the bright yellow fisherman statue holding a large fish.

In the morning you can explore the Whitstable fish market and eat fresh oysters at one of the restaurants dotted along the harbour. On the right hand side of the harbour there is also a small arts and crafts market, where locals sell their handmade products from inside cute little huts.

Whitstable Castle was built in the late 1790’s as a private residence. Having many owners over the years, in 1975 it was made available for the benefit of the public. Gaining a Heritage Lottery bid, the gardens have been redesigned and restored, and are now free to visit.

From the Castle’s lower terrace visitors have lovely views over the sea, the Thames Estuary and the nearby Isle of Sheppey. 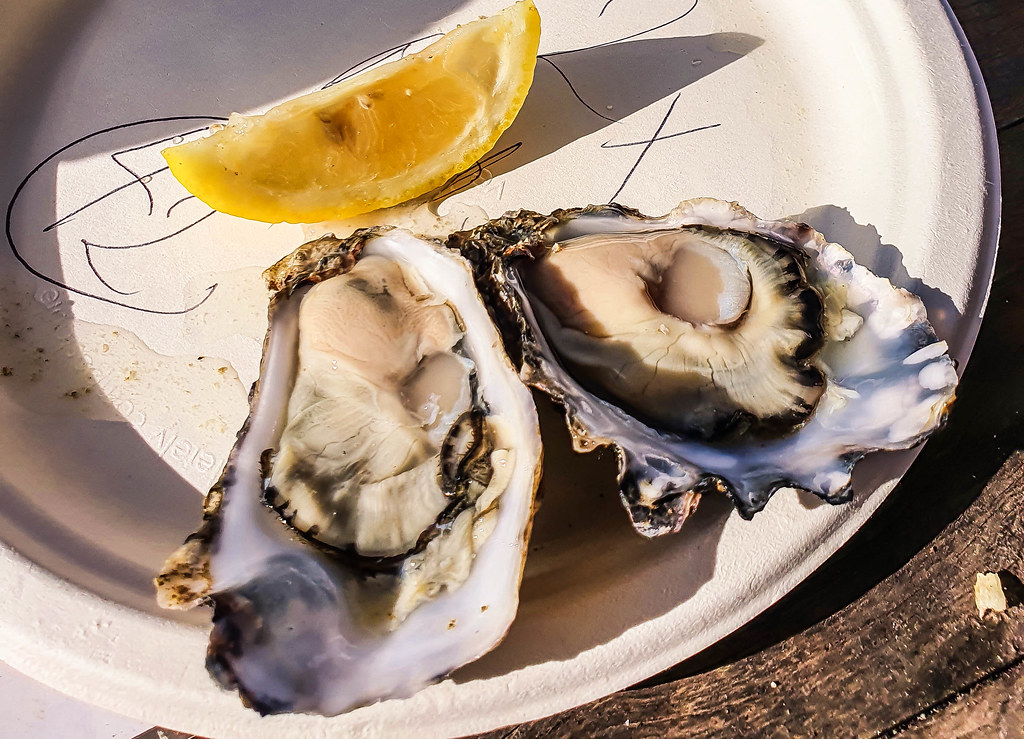 Many people come to Whitstable to try the famous British oysters. The Whitstable Oyster Fishery Company operates a few restaurants in town, but also sends the valuable mollusc to Billingsgate Market in London, and to some of the oyster bars in the capital.

You might think that all restaurants in Whitstable sell Whitstable Native Oyster, but that is not the case. The Whitstable native oysters are grown in the intertidal waters of the Whitstable Bay, which twice daily brings  fresh water from the North Sea. This provides a great environment for algae to grow – the natural food of oysters. They purify the water, up to 200 litres per day, per mollusc.

Oysters are a great alternative to fish. If you have watched the Seaspiracy documentary, you might be thinking of reducing your fish consumption.

I tried the Whitstable oysters at The Forge, a beach shack located among the fishing boats, with a great view over the beach. Other great places to eat at Wheeler’s Oyster Bar, The Crab and Winkle and, for a Michelin star experience, The Sportsman.

Learn More About the Oyster Industry in Whitstable 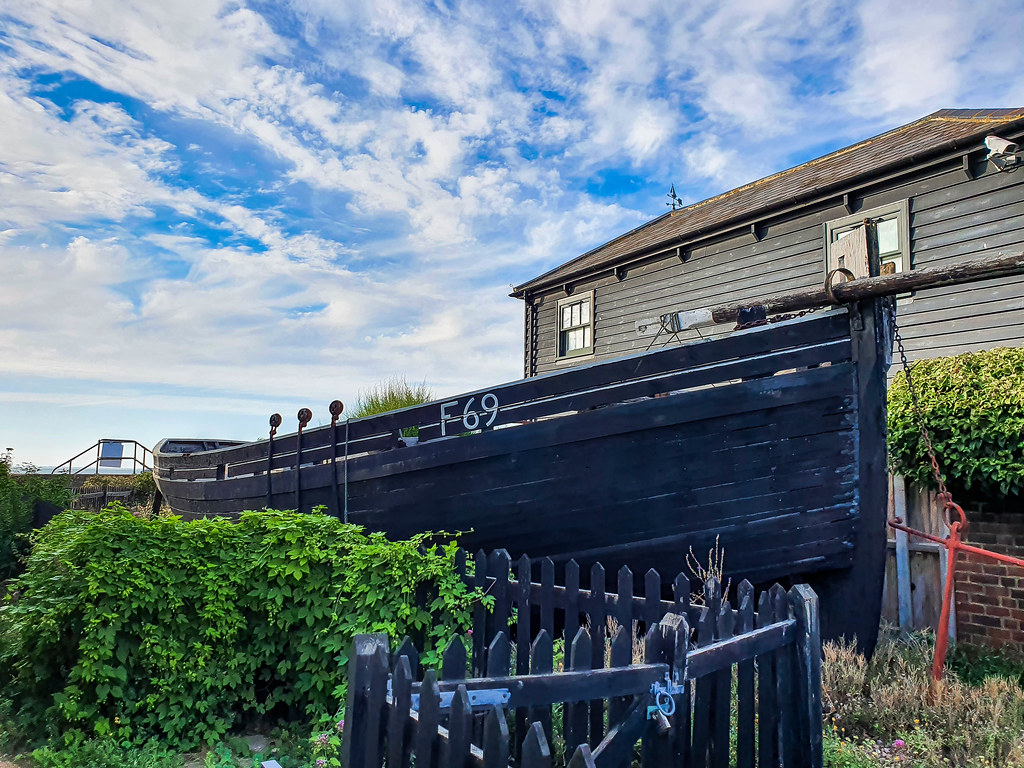 It is believed that oysters have been grown and harvested in Whitstable since the Roman times. The Whitstable Oyster Fishery Company was established as a cooperative in 1793, reaching its peak in the middle of 19th century, when it used to ship around 80 million oysters a year to Billingsgate Market. However, the company can trace its origins to as early as the 15th century.

Whitstable Oyster Fishery Company not only put Whitstable on the touristic map, it now employs over 150 local people. They invested in their farm to grow oysters in a sustainable way and ensure their future. In 1997, the farm was granted the Protected Geographical Status by the EU. 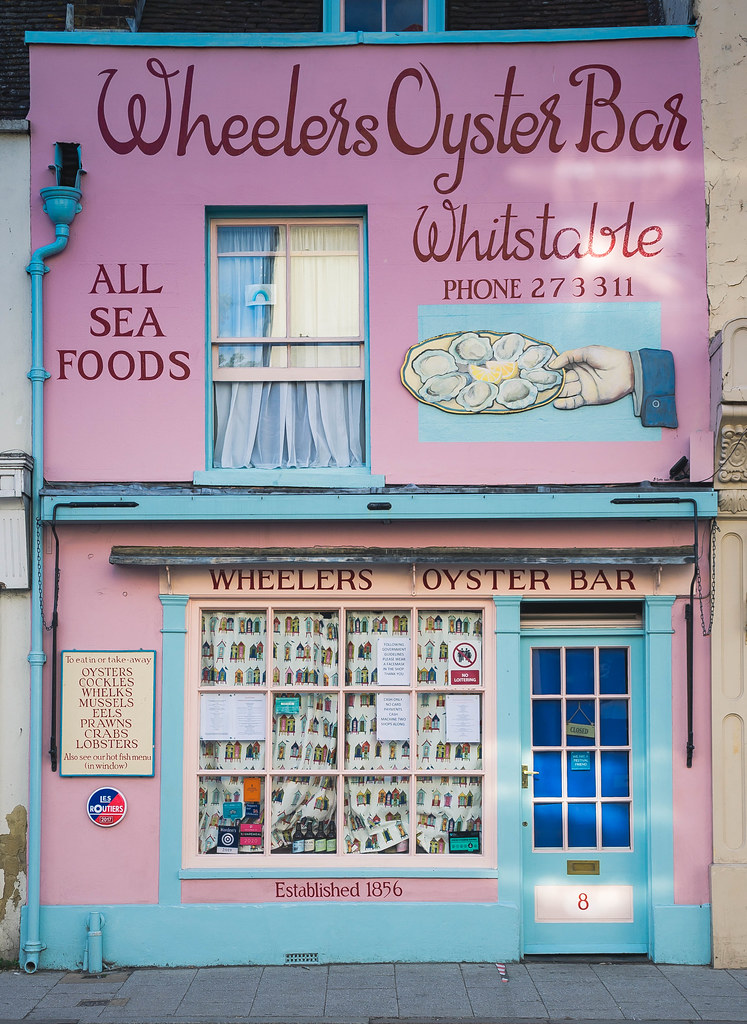 To learn more about the oyster industry in Whitstable, check out Favourite, the last remaining oyster yawl in town. It is nestled between two houses on Island Wall, pretty easy to miss if you are not specifically looking for it.

In the 19th century there were over 100 fishing yawls out at sea in Whitstable Bay, harvesting oysters. Built in 1890 by the Whitstable Shipping Company, Favourite is now the only traditional oyster yawl in public ownership. It sailed happily until the second World War, when it was machined gunned by a German plane, and beached. She was pulled out of the sand in 1953, before the sea wall was built, and moved to its current location in 1978.

To learn more about Whitstable’s oyster yawls and the marine traditions, go to the local museum on Oxford Street.  You will also find out how the Deane brothers invented the diving helmet right here in Whitstable.

Enjoy a Drink with a View at the Old Neptune 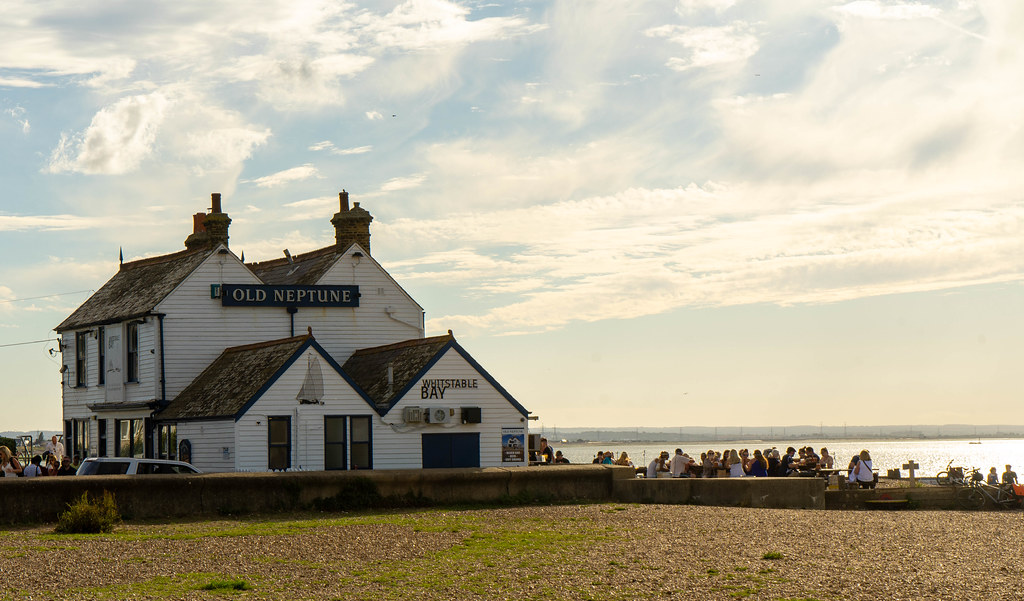 The Old Neptune has a privileged position, right on the beach. It has a lovely outdoors terrace which makes a perfect place to watch the sunset from, along with a drink. Unfortunately, I was driving, so no alcohol for me, just the sunset views. 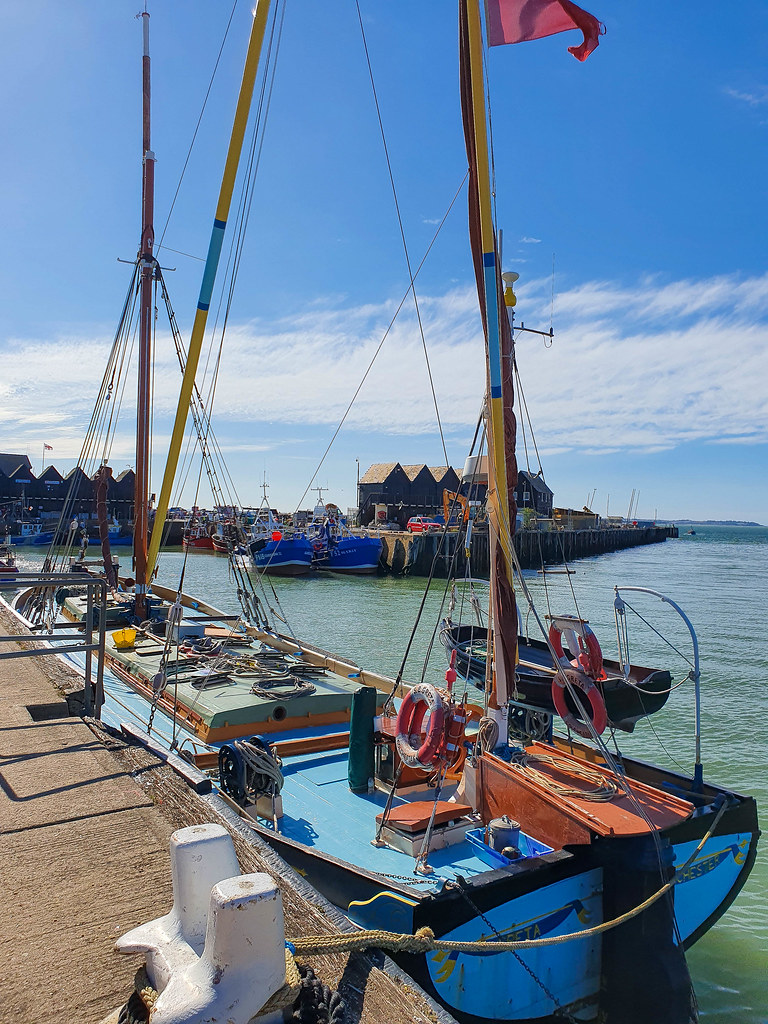 Greta is an 80ft long barge, built in 1892 to transport different goods such as grains, malt, building materials and beer. During the second World War she carried ammunition from a depot near Rochester to the navy vessels anchored in the Thames Estuary. In 1940 she took part in the evacuation of soldiers from Dunkirk. She is one of the oldest remaining Thames sailing barges left in the UK.

Check Out Some of the Local Galleries and Art Studios 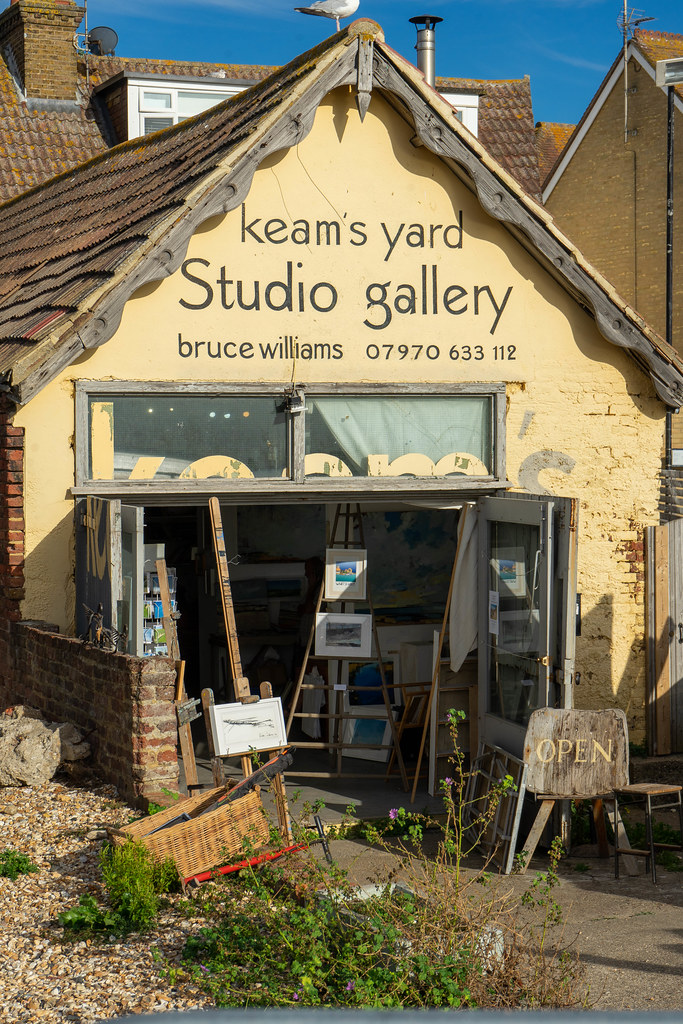 There are quite a few local galleries and art studios in Whitstable, and it’s no wonder that the town inspires, when it’s so picturesque.

The Harbour Gallery offers a fantastic collection of eclectic art from a range of national and international artists. Chappell Contemporary has an edgy collection of works from both emerging and established artists around the UK. Fishslab Gallery is an independent space for artists, run by artists. The exhibitions change every week, so it’s always interesting to see what’s new when you visit Whitstable. 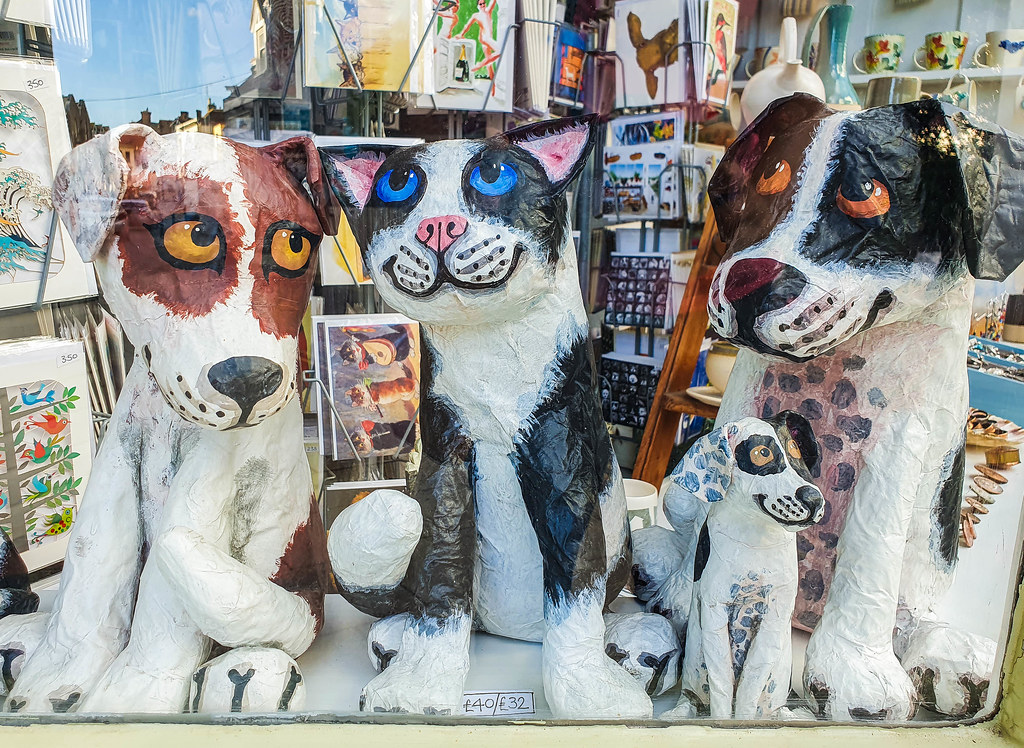 The charming old town of Whitstable has many independent shops and boutiques from where you can buy a unique souvenir, whilst supporting the local community. On Harbour Street you will find small shops selling vintage treasures, an indie record shop, local fashion entrepreneurs, even a locally made cheese shop.