Havana welcomed us back from Vinales with open arms. We arrived around lunchtime, after stopping by to have some food at a service station on the motorway.  Each of us was dropped off at our casas and, as before, I was the only one staying in the old centre of Havana. The first thing I did when I arrived was to find the owner and ask if the airport has found and delivered my luggage. The answer was no… 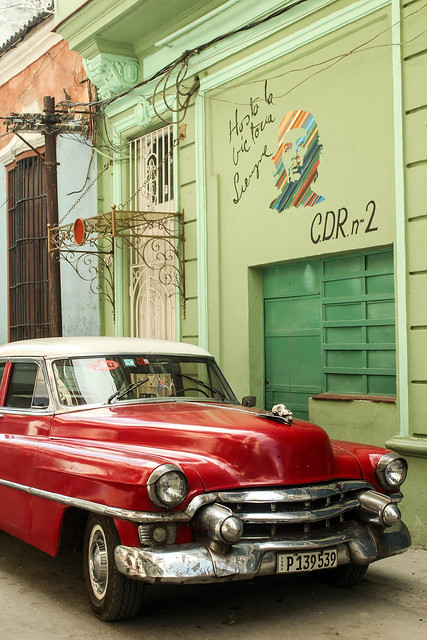 We all met a few hours later in front of hotel Inglattera, the oldest hotel in Cuba and one of the most classic ones in Old Havana. We were all very excited because the big moment that we were all secretly expected for, arrived: a one hour drive through Havana in an old convertible car. I shared the car with Emma and Lakshmi and we decided we want to ride in the pink one.

The verdict? It was amazing! If you go to Havana you have to do a tour with a classic car. I enjoyed the drive so much that I can easily say it’s in my top 5 exciting things to do while in Cuba. Even if we were driving pretty slow, I could feel the wind in my hair and I felt like a VIP when other tourists were looking at us. Even some Cubans were smiling to us. We started in Old Havana and we headed towards Vedado, stopping in Piaza de la Revolucion to see the huge mural of Che Guevara. Then, passing through the “tropical forest” we drove through the rich area of Havana and headed down on Avenida 31, all the way to Malecon. By the time we reached Hotel National the sun was setting behind us and the Malecon was full with couples watching it. 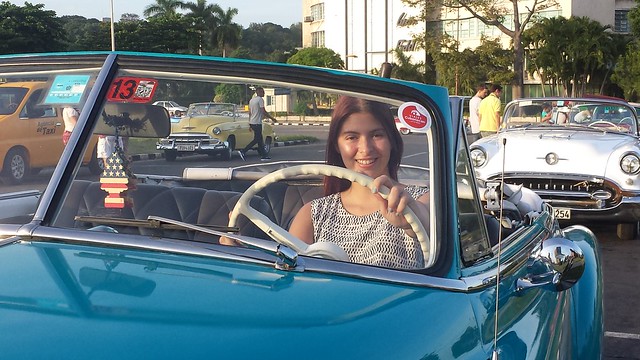 Before dinner we went for a drink to the rooftop of Hotel Ambos Mundos, Hemingway’s favorite. Here is where I felt adventurous and tried for the first time another cocktail than Pina Colada: the famous Daiquiri.  And where better to try for the first time Hemingway’s favorite drink than at the bar of his preferred hotel? Did I like it? Yes, so much that I ordered it again for dinner, at the small but beautiful ArtPub restaurant. 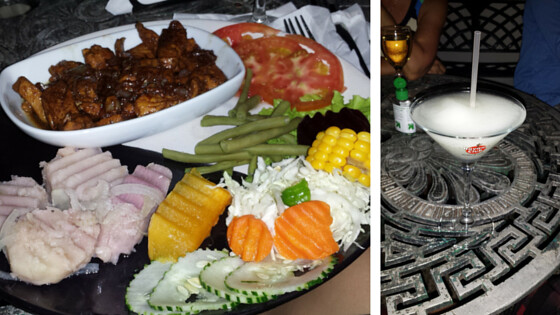 It was the end of our tour and all of us had different plans and departure times from Havana. The ones that were still staying, decided to meet the next day too, to wonder around the old town for a bit and just enjoy the atmosphere. We explored the San Ignacio market, where I regret not buying more authentic Cuban crafts (these people are not only friendly and good-looking, but they are also talented painters, sculptors, craftsmen, etc). I was unfortunately limited as I had no luggage to bring them back in and to buy a bag in Cuba would have cost a fortune. 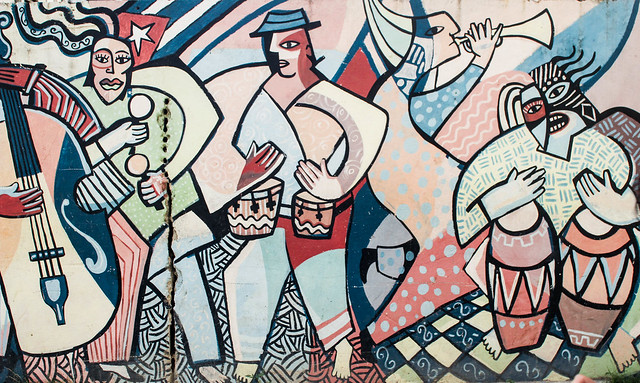 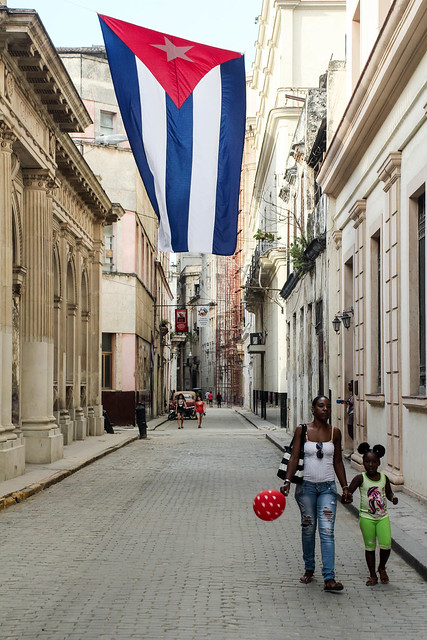 We also discovered an amazing singing group at one of the restaurants in Piaza Vieja (where I don’t recommend you to eat as it’s a scam). We sat down for a coke and ended up dancing with the band. I’ll leave you with a small video of them, as my words can’t describe how great they were!

Unfortunately the time to say good-bye arrived, and I headed back to my casa, to get my backpack and go to my next destination: Varadero. I am against resorts and all inclusive hotels and I knew from the beginning that this is what Varadero was, but, at the same time, it is the place with the most beautiful beaches in Cuba (along with Cayo Coco). The prices for a hotel here are very high and at the beginning, when doing my research, I almost gave up to the idea that I will ever see these amazing beaches. But, somehow, I found out that there are some casas in Varadero village, so I didn’t hesitate and booked a room at Roberto and Martha’s home. 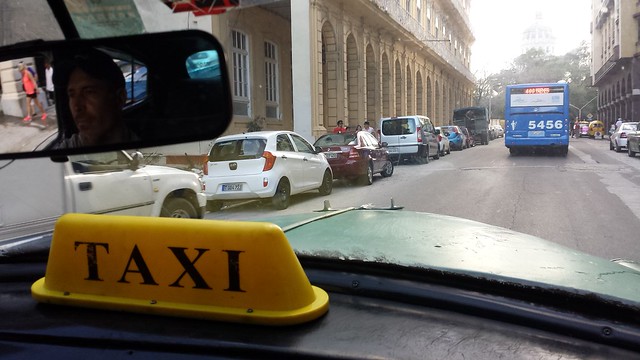 I arrived in Varadero pretty late and walked for almost 15 streets, from the bus terminal to the town. I was exhausted by the time I arrived but I was welcomed with open arms and kindness and I was invited straight away to join the birthday celebration of Roberto’s and Martha’s son. I was given cake and coke and introduced to all of his friends. I was immediately treated like a member of the family.

My room at Robert and Martha’s house was actually an apartment. I had my own living room and kitchen, and in the back a beautiful bedroom with a huge bed and modern furniture. The bathroom was big and very well equipped with toiletries and a hair dryer, and the shower was big and powerful. I was impressed; I was getting all of this for only 35 CUC a night.

In the morning I got very excited about two things: Roberto’s pancakes – about which I read on Tripadvisor, and the meeting with the sea. Breakfast was not disappointing at all and the amount of food I got was simply too much for me: eggs, toast, ham, cheese, a big plate of fruits, pancakes with maple syrup, coffee, fresh juice… it kept me going until dinner. And Roberto’s pancakes were indeed delicious, no disappointment here.

I’ve put on my bathing suit (well, Emma’s, cause mine was lost together with my luggage), and I borrowed a beach towel from an Austrian girl staying in the same casa, and crossed the street to go to the beach. Yes, that’s how close I was from it, all I had to do was just cross the street. I’ve made my way through the palm trees and… there is was! 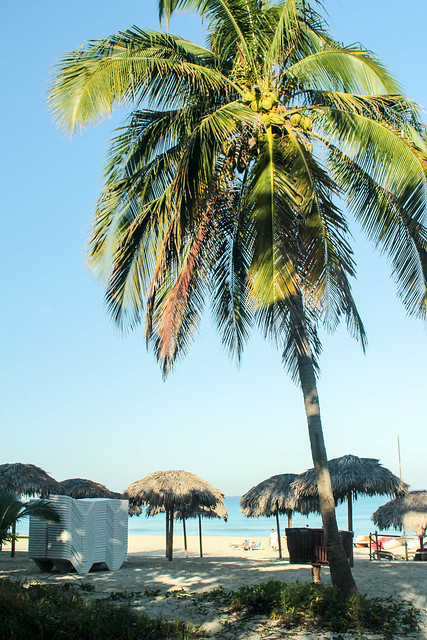 Do you know those postcards with stunning beautiful blue sea that you think it’s impossible to exist? This image from a postcard was right in front of me. The beach was almost empty at that time of the morning and I could feel the cooling breeze breaking through the heat. The only sound was the one of the small waves breaking while hitting the sandy shore. I couldn’t wait any longer so I dropped my things on the sand and jumped in the water. I swam, I jumped over the waves, I dived in…. and I enjoyed every second of it. The water was so clear that I could see tiny fish swimming around my feet. 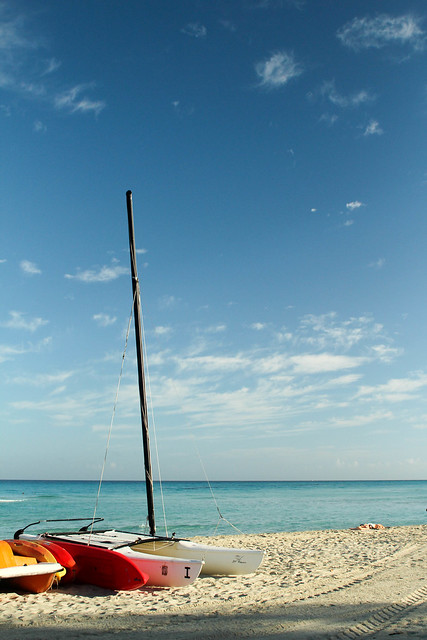 I negotiated my beach chair and made friends with Milan, the Serbian that was staying in Varadero for six months each year, at the hotel right behind my casa. Every day he brought me drinks from his all-inclusive and he even took me for a tour of the hotel. 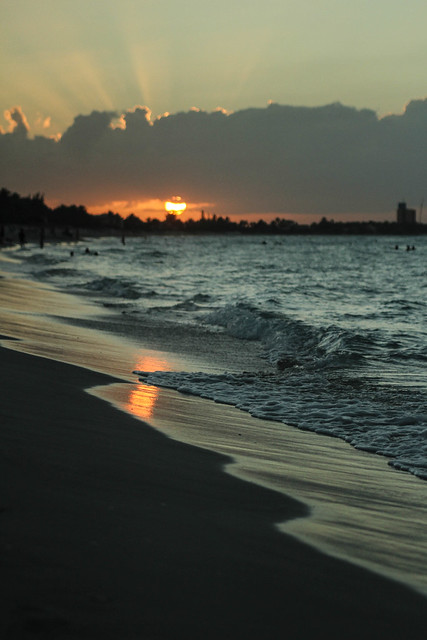 One evening I went to eat at the local eatery in town, recommended by my hosts. I waited in the queue with the other Cubans and chose the dish I wanted from a panel hanged on the gate. The whole restaurant was actually a garden with a few benches and a cooking area, where you would pay at the till and then wait for someone else to put the food in your plate. It was a very interesting experience as the food was cooked right there in front of me, in big quantities. I got fried liver with yellow rice and salad. It didn’t look great in the plate but it was delicious. And it was so much food that I had to share it with the dogs and cats hanging around in the garden. How much did this experience cost me? 60 pesos (about 2 dollars). 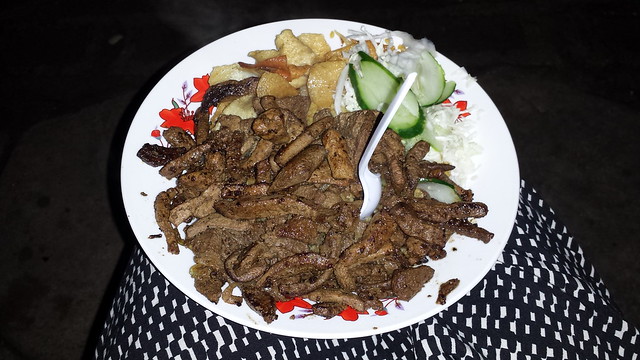 As my luck left was left way back, in England, one of the nights, while I was chatting with the other guests of the casa, relaxing on a rocking chair, a wasp stung my finger. And after 3 days it got so bad that I had to go to the emergency because my finger grew three times bigger than normal. Apparently I was allergic to the Caribbean bee. So for the last of my stay in Cuba I had to be passed on antibiotics, steroids and some other medicine that I didn’t know what they were. And at that point my relationship with the Cuban Rom had to stop. Roberto felt so bad that the wasp stung me in his garden that took me to the international clinic and also to the bus station when I left Varadero.  Martha even made me camomile tea to wash my finger in as often as I could. If you plan on going to Varadero, I recommend you to skip the hotels and stay at Martha’s and Roberto’s house. You will be treated like part of their family! 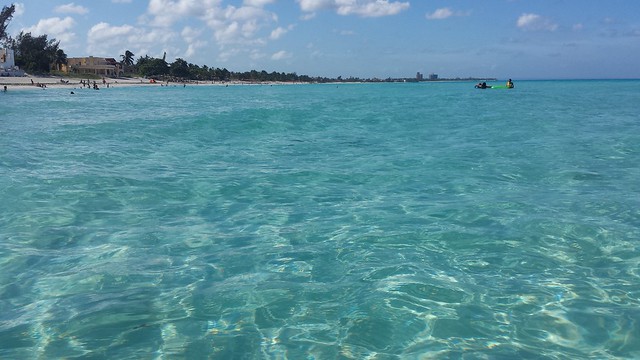 Varadero is the place where most of the charters came with tourists from the UK, Canada or Russia. Most of these people spend all their holiday here, without getting out to see the real Cuba. Varadero is not Cuba. Varadero is a resort where you won’t experience the real life and atmosphere of Cuba. I wanted to go to Varadero for one reason: to relax a few days before going back to England. And because I chose to stay in a casa and not in a hotel, and because I chose Varadero village and not the resorts area, I got the chance to meet again amazing people that left their prints in my life. But you won’t find this if you choose to stay in a resort. I even made friends with the guy that rented the beach chairs, and after the wasp stung me, he kept coming to me to check if I was ok.  I am writing these lines while on the train to London and I can’t hold my smile when I remember all the amazing moments I had in Cuba. For me, Cuba was made out of moments and beautiful people. 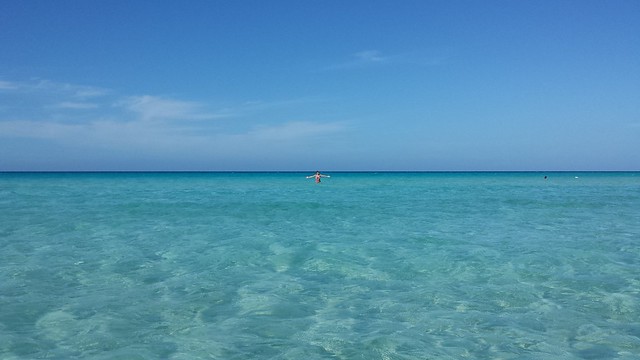 Time flew and without knowing, I was back on the bus to Havana. I wanted this trip to last forever, I felt that 2 weeks passed way to fast and I had still so many other places to explore in Cuba. 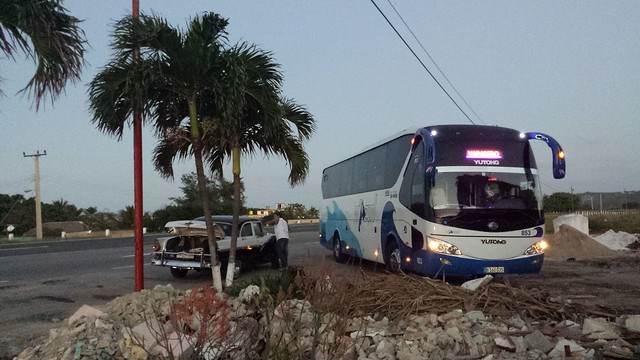 Back in Havana, I walked from the bus stop near Cuba Libre hotel (where Fidel used to have an apartment all for himself from where he was ruling the country after he became the leader of Cuba) all the way to Avenida 5 with Calle 2: about a half an hour’s walk.  At my new casa I met Jose, the owner who was spending half a year in Spain and half in Cuba. He immediately invited me to join him and his friends on the terrace overlooking Vedado and offered me ice cream from the famous Copella – a must to try when in Havana. This was my last full night in Cuba… 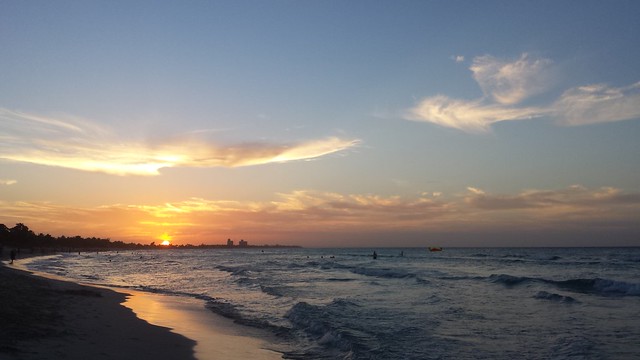 Check out some tours you can take in Varadero: