5 years ago, around this time of the year, I was entering Vietnam by train, at midnight, dead tired after spending the night before on a bench in Naning train station, after the hostel I booked oversold my bed. I remember arriving in Hanoi somewhere around 5am, and made my way towards the old town, crossing an old railway bridge over the Red river, which seemed infinite. I was stepping with caution on the wooden structure hoping that no train will pass by until I reached the other end.

Reaching the hostel, I was welcomed by a locked what seemed to be a garage door with the shutters down. I banged in the shutters and surprisingly, they opened and a sleepy Vietnamese received me inside. I stepped in, making my way through the narrow space between the couch and the motorbike parked in the middle of the room and was shown to my bed.

But as it happens, when you are very tired you can’t really sleep, so I went for a walk on the shores of the Hoan Kiem Lake. I was surprised to find there many Vietnamese people, from 4-year-olds to 90-year-olds maybe, exercising, dancing, or practicing tai chi. At sunrise! And I think that was the moment when I irremediably fell in love with Vietnam.


Later that day I would have my first bowl of pho – the famous Vietnamese soup-, while sitting on a tiny chair on the sidewalk of a street, cooked by a woman right there behind me. I remember it being full of flavour, with big chunks of fried tofu and plenty of rice noodles inside. It was the perfect lunch, followed by a long afternoon nap, to recharge my batteries. 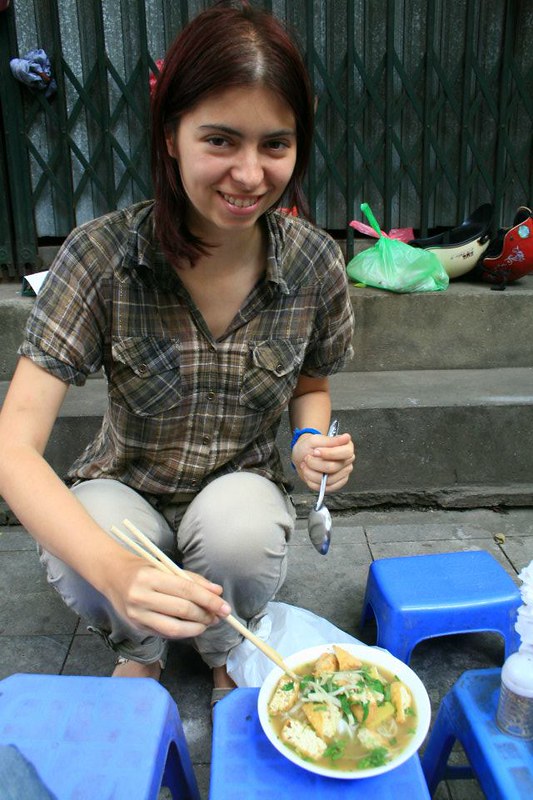 Last Wednesday I visited my friend in London and I insisted we go to have dinner at the Vietnamese restaurant near her house. She told me she discovered it a while ago but didn’t go yet, and this was the perfect occasion. We tried going to a Vietnamese restaurant before, but we didn’t get to because we were “dragged” into a church and offered free food and drinks in order to listen to a half an hour talk. I have been craving for Vietnamese food from the first time she told me about this restaurant and I secretly hoped that it won’t disappoint me. 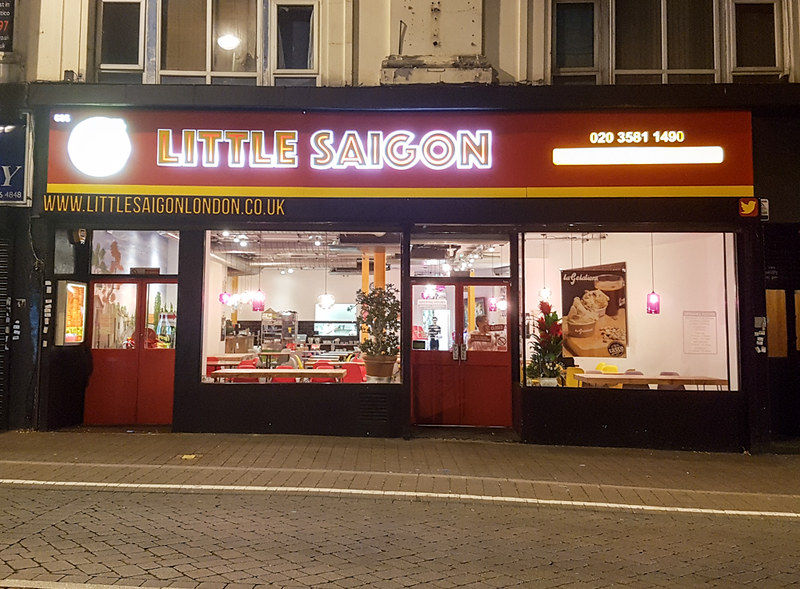 From the outside, the restaurant doesn’t look anything special. It has a big name sign on top and 2 large red industrial doors, from which only one opens. Once inside thought you can immediately notice the beautiful paintings on the walls and the design touches, like the brand new Vietnamese rickshaw on the left hand side. We were greeted right away by a waiter and told we can choose any table we want as the restaurant was almost empty at the late hour we arrived. The menus followed straight away and I noticed in it many of the classic Vietnamese dishes I have tried in Vietnam. As we all know, a lot of restaurants adapt their traditional menus for the English taste, and I was happy to notice that Little Saigon didn’t. 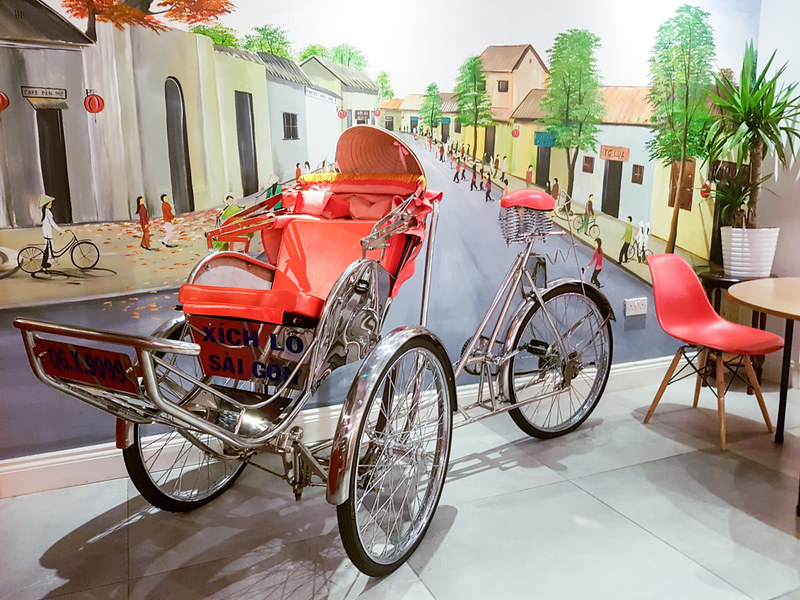 I had a hard time to decide what to order, but in the end I went for the Banh Xeo, a traditional crispy pancake filled with pork belly slices, tiger prawns, carrots, beansprouts and kohlrabi, served with an Asian salad and different herbs. My friend went for the lemongrass and chilly beef vermicelli noodles, served with iceberg salad, cucumber and herbs. After we ordered, we have been brought to the table a basket of prawn crackers.

While we were waiting for the food to arrive, I remembered my cooking class from Hoi An, where I have actually cooked the Banh Xeo. I laughed thinking how clumsy I was with flipping the pancake and how it took me about 3 attempts until I’ve managed to create an acceptable one. 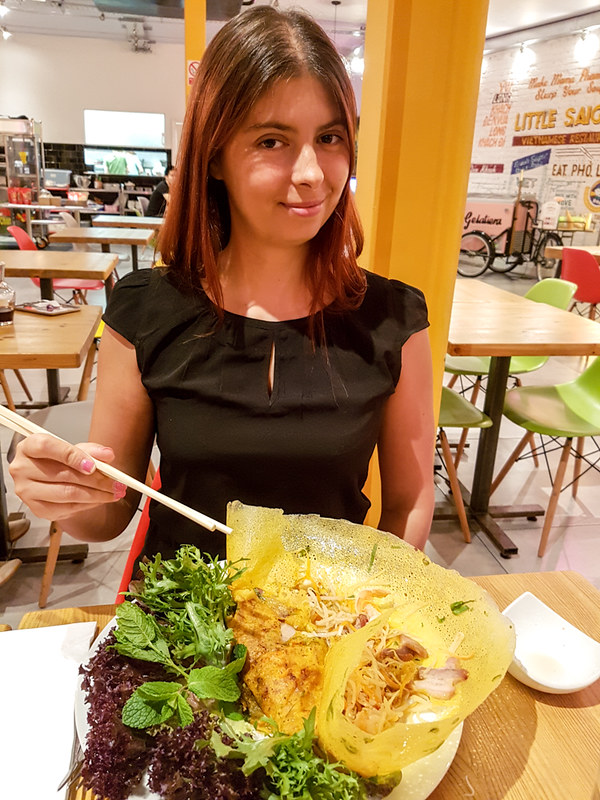 The food arrived not long after we ordered and the first thing I noticed was how big the portions were. Both meals were accompanied by a sweet chilly sauce which I poured over the filling of the pancake.

The meal was delicious and I  found the combination between pork and shrimp to be interesting, the flavours complimenting each other very well. The bottom of the pancake got soggy from the sweet chilly sauce and gave a very nice texture to the raw vegetables. I was surprised of the simplicity of the salad, out of which I recognized the lettuce and the mint leaves, and how well it went with the crispy pancake. 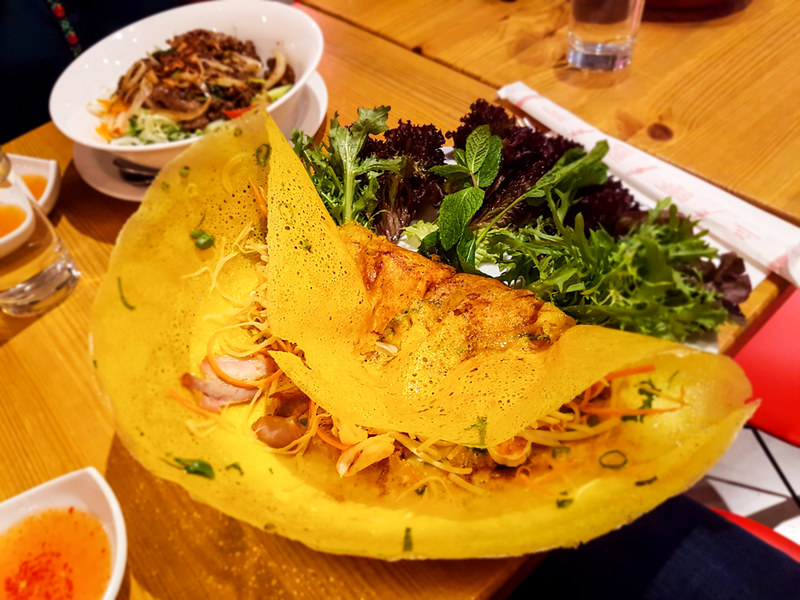 My friends’ vermicelli noodles were also very good, with tender juicy beef cooked in a semi-sweet chilly and garlic sauce. Her entire plate was very fragrant due to the lemongrass marinade of the beef. 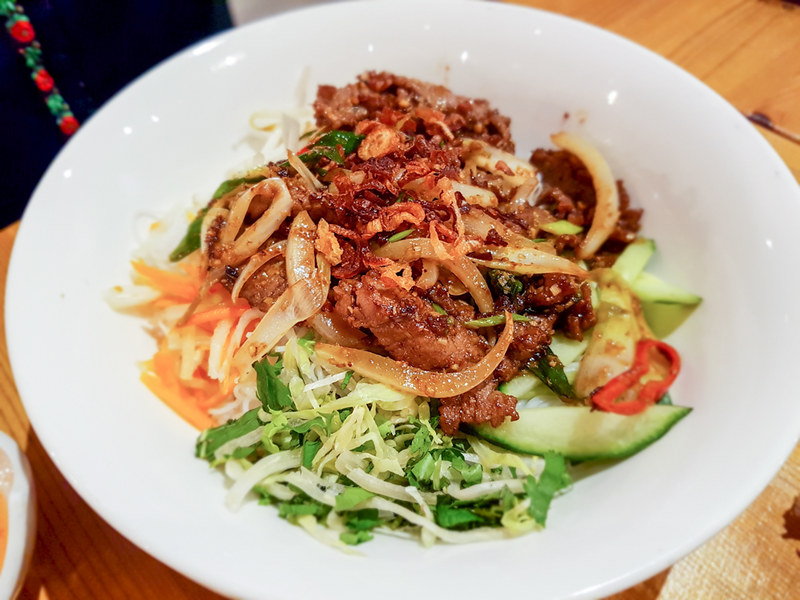 At the end of the meal we had a short chat with the friendly waiter and we found out that he was Vietnamese but born in England. His family came from near the Mekong Delta and it was a pleasure to talk to him about the floating markets there, from where I used to buy fresh pineapple, or the coconut candy factory from where I bought the most delicious sweets.

The only downside was that when we paid, because we used our cards and the meals were less than £10, we had to pay a surcharge of 50p.

You can find the Little Saigon in Leytonstone, at 686 High Rd, E11 3AA. I recommend it for the tasty authentic food, the low prices and the friendliness of the staff.